Recap of all the action from episode 8 of TUF Brazil 3. 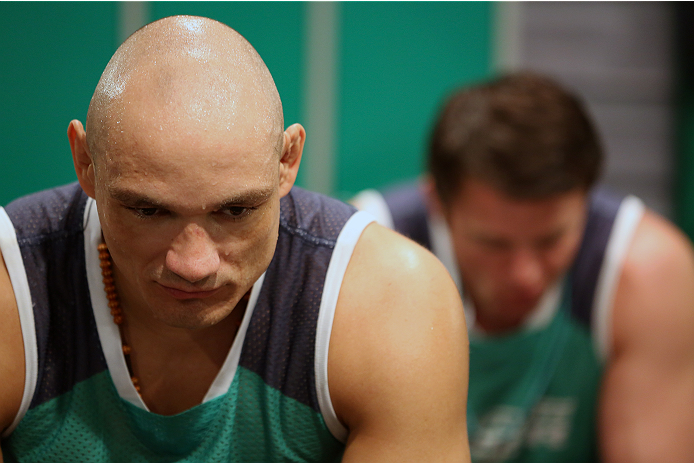 The first thing we se this episode is Lyoto limping around the house. He injured his foot during his fight against Borrachinha, and still can’t put any weight on it. Luckily, the doctors say that it doesn’t appear too serious. Things should improve if he stays off it for a couple days. We then move to this week’s fight announcement. Team Wanderlei has control and they choose their heavy hitter Montanha to face Team Sonnen’s Vitor Miranda. The two are former training partners, and Vitor isn’t happy that he has to square off against a former friend. Montanha doesn’t like it either, but tells us that he didn’t have a choice. It was “an order from the boss.”

When Team Sonnen assistant coach Vinny Magalhaes hears this, he calls out Wanderlei. Specifically, Vinny calls Wandy a hypocrite for making two teammates fight when he made such a deal about a similar instance on the first season of TUF Brazil. We’re then treated to a flashback, and sure enough, Wanderlei is on camera criticizing the opposing team for making two former teammates fight one another. When asked about this contradiction, Wanderlei claims that the two situations are totally different. “[Montanha and Vitor] know each other, but they don’t train or live together.”

Back at the house, the kitchen looks about as bad as any fraternity. There are so many dirty dishes that all of them can’t even fit in the sink. Cara de Sapato has had a enough  of it and channels his anger toward Joilton. He yells that someone should do something about the mess and start cleaning. Upset at being yelled at, Joilton also has a problem because Cara makes this big commotion and doesn’t do anything about it. Sick of hearing everyone complain, Demente starts cleaning so everyone will shut up.

The fighters may be at each other’s throats inside the house, but the battles are even more intense at the gym. Chael Sonnen brings former UFC middleweight Yushin Okami
in to help set an example for the other guys. Worried that the team has fallen into a bit of the rut, Yushin comes in and ratchets up the intensity level. The sparring rounds we see are definitely not done at a cruising speed. They’re going at each other like it were a UFC title fight.

From there we move to this week’s physical challenge. Simply titled “The Bridge,” members of each team work together to create a bridge using narrow have to create a bridge using narrow sticks that can support the one of the Octagon girls. The team then has to guide four different Octagon girls across their makeshift structures. Team Wanderlei takes the early lead and they don’t look back. They cruise to another easy win and earn an all day spa treatment.

We then learn more about each of this week’s combatants. Vitor’s first love was basketball. After a teammate took him to a Muay Thai class, though, he gave it up to dedicate himself to martial arts. He moved to the US to train, but tragedy struck when his four year old drowned in a swimming pool. It’s greatly affected him, but he tries to turn all the sadness in his heart to motivation. Not only is Montanha a former teammate of Vitor, the 25 year old is also a former fat kid. He admits that the other kids picked on him a lot, but they’re probably not interested in teasing him now. The 25 year old describes himself as “stubborn” and “competitive.”  We’ll see if that carries him to victory because it’s fight time! 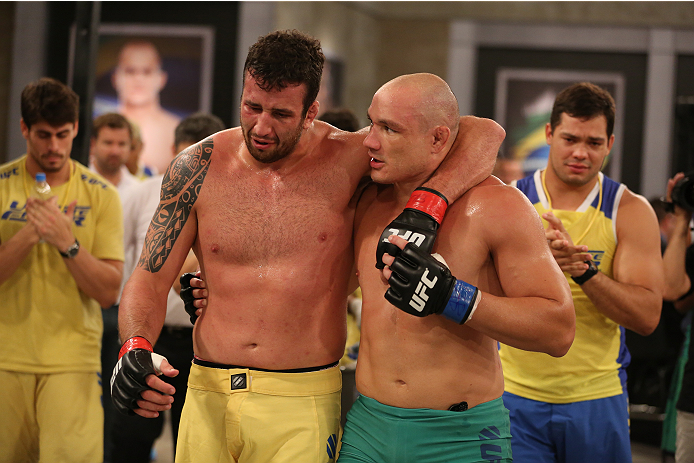 right through them. The two clinch against the fence and Montanha moves for the takedown. Vitor defends, and the two exchange knees. Montanha wears Vitor down from this position then moves in for a single leg. Vitor defends, circles away and reverses position. They break apart, and Montanha loses his balance. Vitor tries to kick, but can’t garner much offense. The referee stands them up and there’s less than a minute to go. Vitor has found his groove and he starts landing solid low kicks. He scores another low kick then adds some punches behind them. Montanha is reeling and rests against the cage. Vitor continues to pressure and connects with a thunderous body shot. He follows up with an overhand right hand that Montanha crashes to the ground. Vitor jumps on the injured man and grounds and pounds his way to a win only 23 seconds remaining.

Both coaches are impressed with each fighter’s performances. Chael praises Montanha’s strategy, but once Vitor found his range he knew that it was all over. “You don’t want to stand and trade with Vitor Miranda.” Wanderlei says that the low kicks had a big effect on Montanha. They gradually wore him down and ultimately lead to the knockout. The former teammates turned opponents walk out to the locker room arm and arm, and we’re able to pick up their conversation. Montanha says, “You know I never wanted this fight,” Vitor hugs him and responds, “We did what we had to do. You’ll have another chance.” A proud coach Sonnen smiles and the episode closes with “The tides are turning around here, and there’s a storm coming.”

We have a sneak peek into next week’s episode. Can Team Sonnen keep the momentum going? How does Team Wanderlei respond? Who wins the coach’s challenge? Find out this and more next week on The Ultimate Fighter Brazil!