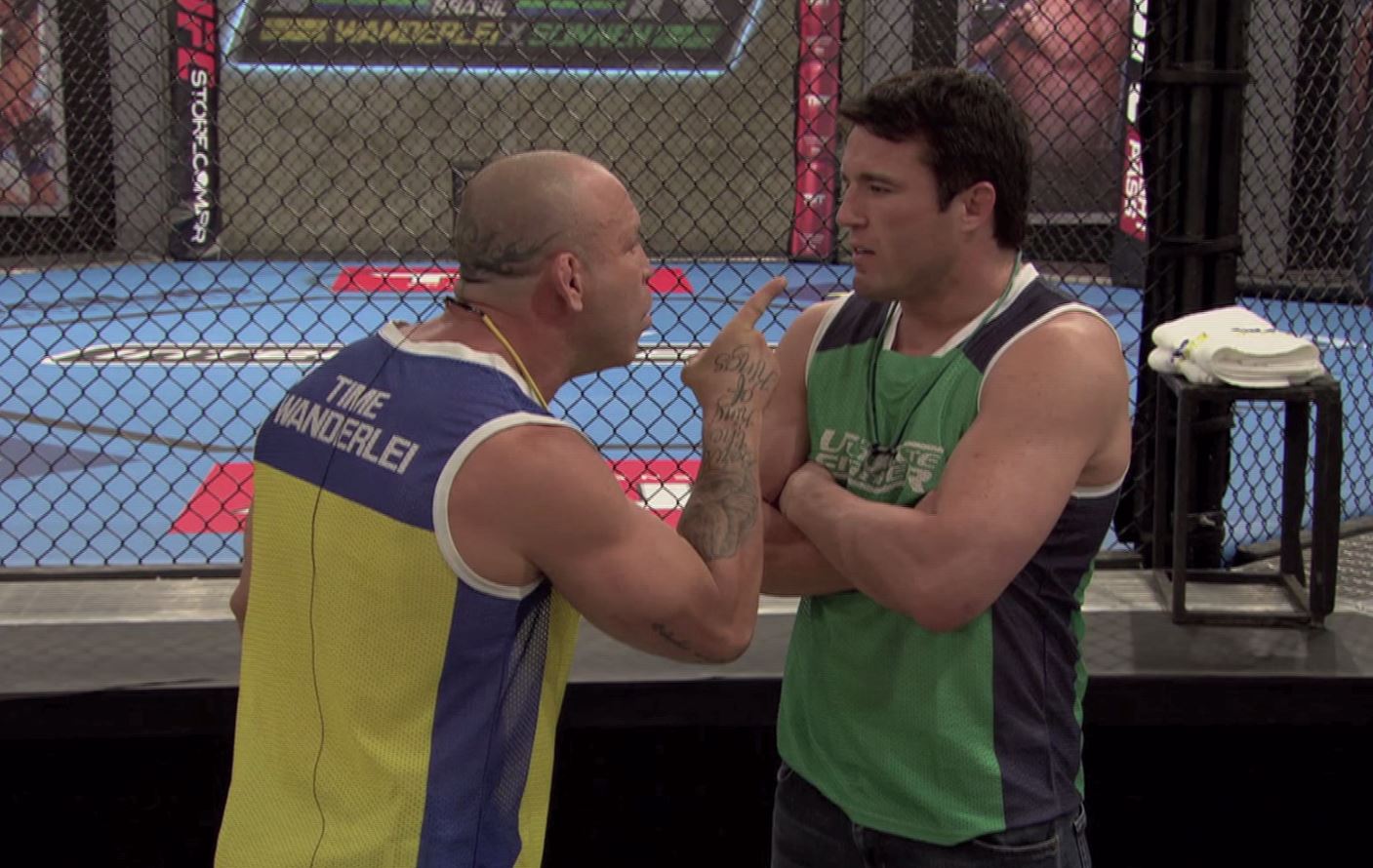 This season of TUF Brazil has featured a lot of fun games, but this week kicks off with something slightly less enjoyable -- the waiting game. Both teams are waiting for the next fight announcement, but Coach Wanderlei Silva is nowhere to be found. When the Axe Murderer finally shows up, an already annoyed Chael Sonnen becomes even more perturbed. From his point of view, “[Wanderlei] looked like he just woke up. I stood next to him and he smelled like he was drunk.” Wanderlei says that he was late because of a doctor’s appointment and that the Sao Paulo traffic slowed him down. When informed of Chael’s allegations, Wanderlei dismisses them and calls Chael a liar. He does realize, though, that there will be little he can do to convince people of this fact. “Unfortunately there are a lot of people at home who don’t know me and will believe his lies.”

Wanderlei announces the fight and it will be Team Sonnen’s Job Kleber against Richardson Moreira aka “Rick Monstro.” Wanderlie calls Job the easiest fight in the house and feels that Rick will cruise to victory. Chael thinks that people shouldn’t so easily dismiss Job. In terms of sheer physical strength, Job is the best on the team. He may have been the last fighter chosen, but he’ll surprise people.

We cut to Team Silva’s training session and they’re maintaining their usual blistering pace. All the fighters are training hard, but Borrachinha and Marmota appear to be taking it up another notch when they go against one another. Assistant coach Isabel knows about their rivalry and says that she gets “tense” whenever they train together. Worried that someone will get hurt, she asks Wanderlei if practices will always be this intense. Wandy doesn’t hesitate at all and responds “always.” Isabel’s concerns aren’t totally unfounded. As Jollyson grapples, a scramble ensues and he ends up getting kneed in the face. A deep cut opens over his eye and he’ll need to get stitches.

As Jollyson tries to calm himself down, we shift to the team challenge. Not as physical as previous contests, this week’s contest is “The Typewriter Game.” A calligraphy pen is suspended over a piece of paper and controlled by eight different straps. Each team member controls one of the straps simultaneously and they’ll have to coordinate with their teammates to write out “TUF Brasil” legibly. Team Sonnen breezes through the challenge and earns their first victory in anything all season. Wanderlei isn’t bothered by the defeat and casually remarks, “At least they won something.” Besides a little confidence, the bad guys actually do win a prize. They have a “slumber party” with the Octagon girls. Get your mind out of the gutter. It just means that they have the girls over and everyone hangs out in their pajamas.

Besides missing out on the champagne and pizza, Team Silva has a more serious problem developing between Cara de Sapato and Borrachinha. Cara has been hearing that Borrachinha is bragging about how he always beats Cara during practice. The two were training partners before the show and Cara de Sapato takes this as a huge insult. Borrachinha denies the allegations, but he doesn’t seem to convince many people. Cara tells us that Borrachinha is a lot different from the man he used to call friend. “He used to be a really nice guy. I don’t know what happened to him.” If Borrachinha keeps alienating people at his current rate, he might not have to start practicing alone.

We cut to Team Sonnen and learn more about Job Kleber. He always wanted to fight, but never had many opportunities growing up to pursue it. His parent couldn’t afford the lessons and there weren’t any community facilities near him. Once he joined the police force, though, he was given the means to pursue martial arts. He views fighting as a way to achieve his dreams and give chances to his children that he was never afforded growing up. Chael admits that Job’s skills are still developing, but he repeatedly praises Job’s heart and determination. He calls Job the hardest working guy on the team. His opponent Rick Monstro is an engineer. He discusses finding the balance between his professional career at a multinational corporation and his career as a fighter. He says that his coworkers like to tease him and give him a hard time, but he’s probably a good guy to have on their side when dealing with those pushy IT guys. He holds an undefeated 9-0 record and has finished eight of those opponents in the first round.

Next it’s time for weigh-ins. You know how these usually go. A couple guys take their shirts off, and stare at one another for a little bit. Well...not this time. The two coaches are mean mugging each other from the start, and then start to trashtalk. Wanderlei makes a few threats and even spits in Chael’s direction. Chael doesn’t bat an eye, and keeps asking Wanderlei when he’ll sign the contract to fight him. He’s also lays on some of that thick, West Linn sarcasm. Wanderlei gets in Chael’s face, and Chael keeps good on his promise from a few episodes ago to never let Wanderlei in that close again. They shove each other and then a fist fight ensues. Wanderlei throws a few punches; Chael ducks under and finishes a double leg takedown. People rush in and try to break the fight up, but not everyone. Team Silva assistant coach Dida is seen punching Chael while he’s tussling with Wanderlei. He even brags about it to the camera afterwards.

Order is restored, and the weigh-in finally happens. Wanderlei then tries to sow some seeds of dissent with Team Sonnen. He tells them in Portuguese that Chael is bad mouthing them behind they’re back. A confused Warrelly isn’t sure what to think. If it turns out to be true, he thinks Chael belongs in Hollywood because “he tricked us perfectly.”

Back at the house, the fighters discuss the brawl between the two coaches. Some side with Wanderlei and say that Chael got what he deserved. Sonnen knew what he was doing when by insulting Wanderlei, and shouldn’t be surprised by the results. As Jim Croce once opined, you don’t tug on Superman’s cape, and you don’t wisecrack an axe murderer. Job, on the other hand, thinks that Wanderlei was out of line and that, “It makes me want to win this fight even more.” We’ll see if that extra boost helps him because it’s fight time!

Rick strikes first with a huge, clubbing right hand. It doesn’t connect, but it allows him to move inside and get the takedown. He starts in side mount, but Job locks up his half guard. Rick stalls for a while and is unable to mount much offense. Slowly, though, he works his legs free and moves to full mount. When he postures up to punch, Job explodes his hips and rolls his opponent over. He can’t capitalize on the move, though. Rick immediately throws up an armbar and earns the tap for another first round finish for Team Wanderlei. We later learn that Job broke his finger some time during the fight. He says he was unable to make a fist or grip with his left hand, and that’s what gave away the armbar.

Wanderlei gloats more and we wrap up with a sneak peek into next week’s fights. How will Dana White discipline the coaches? Can Team Sonnen find a way to win? Does Borrachinha make another enemy? Find out this and more next week on The Ultimate Fighter Brazil!