Read on to find out who wins the final TUF Brazil 3 semifinal bouts! 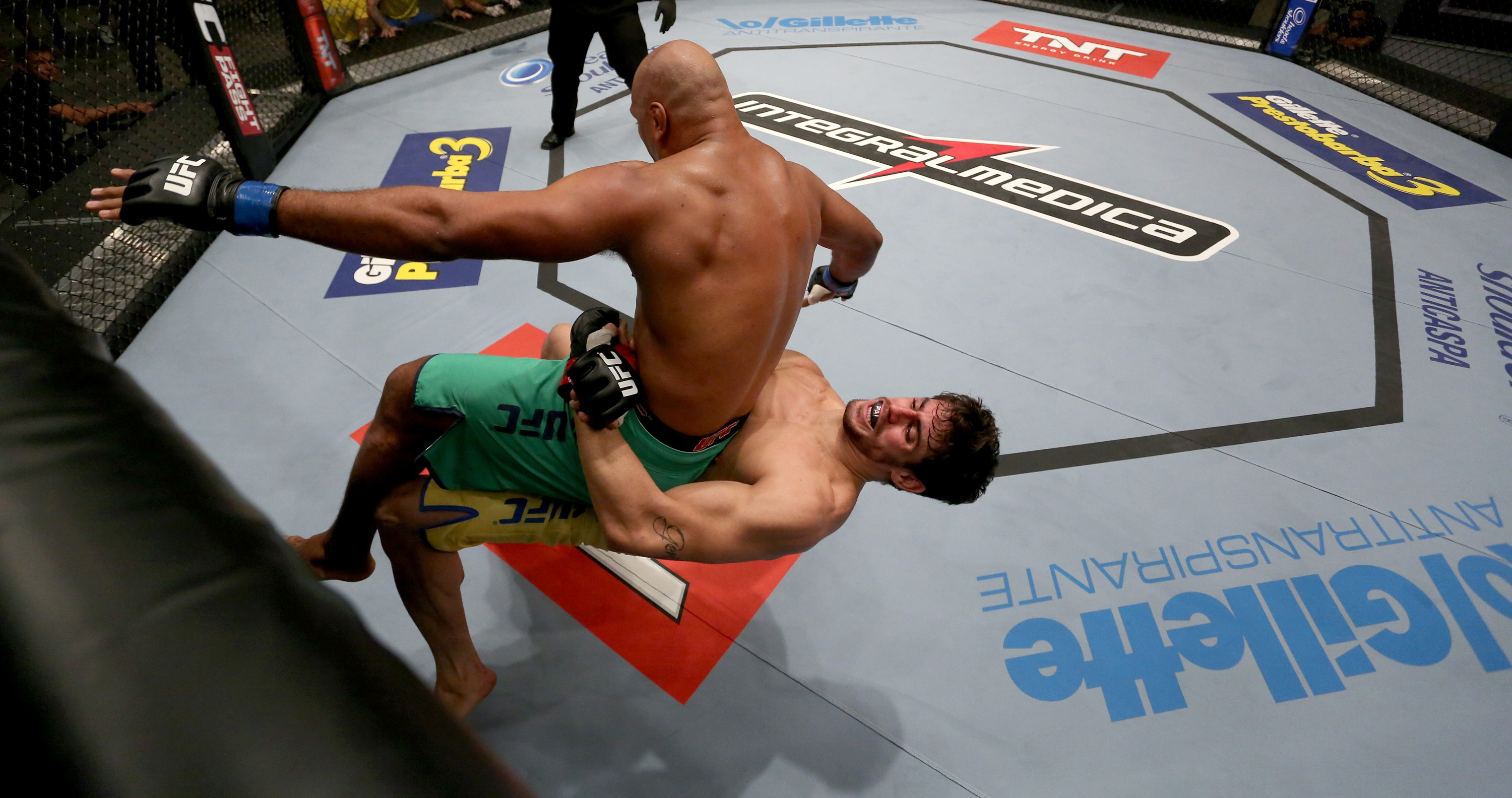 This week’s episode opens with the second middleweight semifinal between Team Sonnen’s Lyoto and Team Wanderlei’s Demente. Erick Albarracin is still with Team Sonnen and continues to show them new wrestling techniques. Lyoto is especially grateful for his presence because he knows how important takedown defense will be for victory. He plans on using his footwork and karate to get the knockout. As far as Demente is concerned, he calls Lyoto a “dangerous man” on the feet, but he’ll take this fight anywhere because game plans go out the window once the bell rings. We don’t have to wait long to see the effectiveness of this philosophy because it’s fight time!

Working from a southpaw stance, Lyoto rattles off kick and punch combos as the round begins. He attacks from different levels and strikes at Demente’s legs and head. Demente takes the range away by charging forward and the two are against the fence. He tries for a takedown, but Lyoto defends. They jockey for position, and Lyoto hits a foot sweep that gives him enough space to return back to the center of the Octagon. Once he’s back in the open, Lyoto’s legs and arms start flying. His repeatedly push kicks and one of them drops Demente to the mat. Lyoto lets him back up, and hits a couple kness from the Thai clinch. Demente pummels into position and pushes Lyoto against the cage. From them he smothers, knees and foot stomps his way to the close of round one.

Lyoto keeps hammering away with his left leg and hand. Demente tries to close the distance, but can’t cope with Lyoto’s impressive footwork and absorbs counter strikes in the process. They trade strikes, but the output has slowed from the first round. Demente finally does some damage to Lyoto, but it’s with a low blow. After the restart, Demente continues to press forward. Lyoto tries to stop this pressure with the clinch, but can’t control the aggression. Lyoto kicks, Demente swings big haymakers, but neither can connect with a strike of consequence. In the final minute, both fighters struggle to gain momentum, but Demente looks much fresher.

Despite the fatigue, Lyoto continues to kick and find the mark for his left cross. Demente responds with an overhand right and starts to pour it on. Lyoto separates, but can’t break Demente’s offensive onslaught. A head kick finally stops the advance, but damage starts to accumulate. The other fighters in the background start cheering the men to push though, and they respond in kind. They clinch, Demente goes for the takedown and Lyoto defends. They stall against the fence and the ref breaks them apart. Even though he has his hands on his hips, Lyoto still manages to land another left hand. The round ends, and we’re heading to the judge’s scorecards.

It’s a close fight, and Lyoto takes it by split decision. Demente is disappointed, but he vows to continue to fight. Lyoto re-injured his foot in the fight but he has a lot of time to heal up before the finale. As he’s putting ice on the foot, Warlley walks up to his teammate and apologizes in advance for having to punch him in the face.

We then shift focus to the final fight of the season between Rick Monstro and Vitor. Rick hitches his victory on getting the takedown and Vitor knows it. Both are tarining partners with Team Nogueira and are quite familiar with each other’s style. Despite being friends, they realize that they have mutually exclusive goals and that they’re just doing their jobs.

Both land stiff jabs as the round starts, but Rick is able to recover quicker. He pushes through and attempts a takedown, but Vitor scrambles and returns to his feet. Rick pushes the fight back against the fence and throws a big uppercut. IT lands, but it also gives Vitor enough room to circle back to the center. They fight against the fence again, but this time Vitor lands knees from the clinch. He starts to get his rhythm, but Rick answers with a power punch and Vitor backs off.

Rick rushes for the takedown, but Vitor  reverse position and knees. He controls the clinch and slides out the back to grab a waistlcock. Rick counters with a kimura, and they break the grappling battle. Rick comes back with a flurry, but starts to breathe heavily. Vitor pounces on the opportunity and lands another knee to the body that causes Rick to fall backward. Vitor lets his opponent stand, but Rick milks it so that only three seconds remain by the time they restart. Vitor kicks and the round ends.

Vitor kicks and Rick charges forward. Vitor sprawls perfectly and takes top position. He starts unloading the ground and pound and Rick turtles up. It’s only a matter of time and the referee stops the fight only 33 seconds into the round. Vitor advances to the finals with a second round TKO.

The finals are set, and we wrap up the episode with a preview of next week’s event. Can Cara de Sapato’s grappling overcome Vitor’s power? Does Warlley find an answer for Lyoto’s karate? How does Fabio Maldonado slow down fast rising heavyweight Stipe Miocic? Find out this and more next week on The Ultimate Fighter Brazil Finale!