Read on for a recap of the fifth episode of The Ultimate Fighter Brasil.. 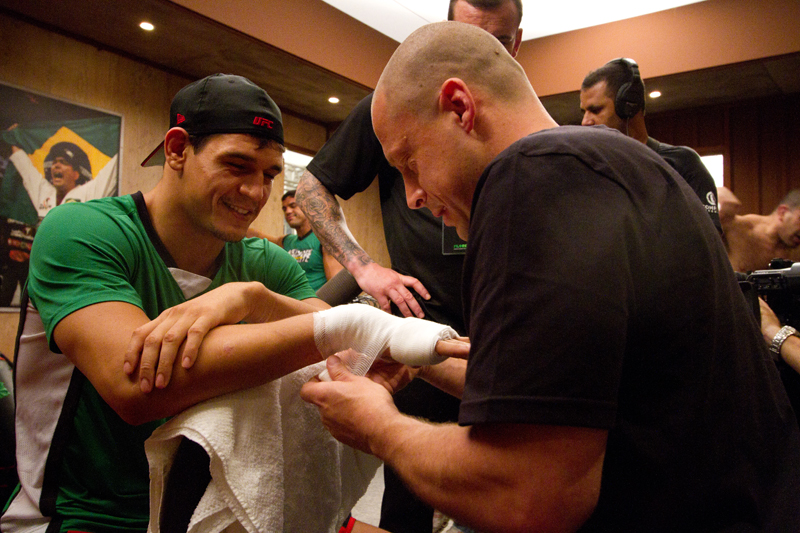 The result of the fight on episode four of TUF Brasil still resonates in the house as episode five begins. Rodrigo Damm beat John Macapá in a battle that opened the door for many different opinions, but the only ones that count are those of the judges, and they decided that Damm won by a split decision.

The choice of the second middleweight fight made by Vitor Belfort once again provoked debate, and the view that the residents of the house have about Cezar Mutante and his relationship with the team coach leaves room for the word "protection," making things very uncomfortable. Some say that Vitor chooses the less difficult match for his pupil, leaving athletes like Sergio Moraes - who broke down in tears because he felt like he was on the outside looking in - the task to go up against the toughest opponents.

In Vitor’s customary pre-fight selection speech, Wanderlei showed his discomfort, and he took advantage of the absence of Rodrigo Damm, who took the day off, to pepper his rival with technical questions.

Leonardo Macarrão, who had the hardest elimination fight of TUF Brazil, was Vitor's option to face Cezar Mutante. Clearly the reach of Mutante will be a problem for Macarrão, who will also need to overcome the pressure of winning the first bout for Team Wanderlei.

From the training center of TUF Brazil to the house, where Gasparzinho camped out with his baggage in the garden so he is always alerted by the presence of frogs, the rest of the competitors start to get concerned about the mess. Some of the athletes don’t have organizational habits, and the living conditions make a lot of people very uncomfortable. Needless to say, a task force will be needed for cleaning up.

One of the most discrete members of the house, Vina, thinks about the routine of some who seem to have no focus to go to the end of the season. According to the Team Wanderlei member, these guys can't wait to see a camera in order to do something to show off and cause trouble.

Show off? Oh, come on, right Gasparzinho? Impersonating a radio announcer, the hilarious member of Team Vítor teases Damm, saying he is boring, while interacting with Serginho and Wolverine. Damm rejects Gasparzinho's joke and it is clear that the two aren't so friendly with each other, although they are on the same team.

Before the weigh in, Mutante tries to style his shirt with some sayings and makes a mistake when writing "voceis." Mutante becomes the target of jokes from his companions, and they keep pointing his attention to the error that may have left all his Portuguese teachers ashamed.

With his traditional subtlety, one of the most popular fighters that hasn't competed yet, Francisco Massaranduba, gives the formula to solve the problem of the disappearance of Gasparzinho's things and its consequences.

Now it’s off to the fight, and before receiving a straight left that shook him, Macarrão hit two good leg kicks. Losing a chance at the outset, the member of Team Vítor pressured when Macarrão recovered and received a left and a right hand that made Mutante walk backwards. Even with a nosebleed, Macarrão showed better Muay Thai, and he shook Cezar with a sequence of punches. An unsuccessful takedown attempt by Mutante was defended by Macarrão, and even though he went down the second time, they got up to finish the round.

Using the old saying from the early days of MMA fighters - if you want to take me to the ground, I will punch and kick you, and if you punch and kick me, I'll take you to the ground - Mutante applied a beautiful takedown and quickly passed guard. Using his long arms, he was roping Macarrão’s neck before pulling guard and finishing the fight with a guillotine choke at 1:05 of the second round.

"Yeah, I knew I made a great fight, but to me a good fight is the one you win. If I lost it, it wasn't a good fight," said Macarrão.

The winner of the day, even showing weaknesses that could be exploited by future opponents, said, "Fortunately we executed the right strategy. I heard the coaches change the strategy from one round to the other and I got the submission."

Now, the score is 4-0 for Team Vitor, demanding some emergency action from Wanderlei and his staff.