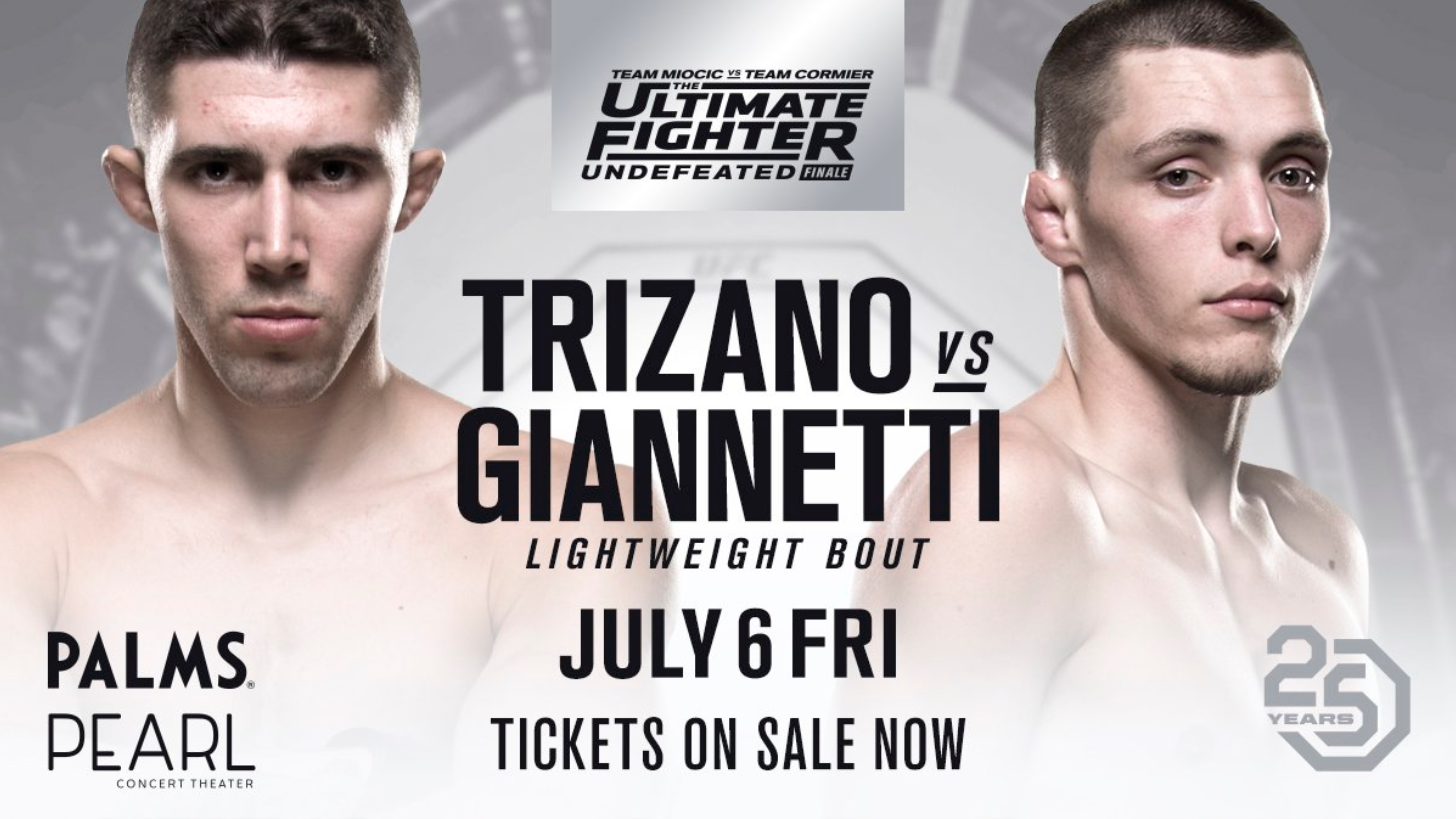 In an Ultimate Fighter season that featured nothing but undefeated competitors, lightweights Joe Giannetti and Michael Trizano still managed to stand out ahead of the crowd.

Now the two lightweight prospects will meet in the live finale on July 6 from Las Vegas, with the winner being crowned the latest Ultimate Fighter champion while also earning a lucrative contract to join the UFC roster.

On the show, Giannetti and Trizano both put on dominant performances to prove they belonged to face off in the final fight at 155 pounds.

Giannetti came to the show after amassing a perfect 6-0 record on the regional fight scene while training out of South Shore Sport Fighting in Massachusetts. Standing 6-feet-tall and competing at lightweight, Giannetti is almost always the longer and taller fighter, and he's used that to his advantage throughout his career.

Six of Giannetti's seven professional wins have come by submission, as "Skeletor" has wrapped up numerous opponents in a variety of chokes both from the top and bottom. Before he could make it on to The Ultimate Fighter, Giannetti first had to get to the tryouts, so he actually used a crowdfunding site to raise funds to pay for his travel to Las Vegas to see about earning a spot on the 16-man roster.

The gamble definitely paid off, as Giannetti was scooped up to join the show as one of the eight lightweight fighters who would be vying for an opportunity to work under heavyweight champion Stipe Miocic or light heavyweight champion Daniel Cormier. As it turns out, Giannetti ended up on Cormier's team and the fighters quickly bonded once the training sessions began.

RELATED: Get to Know Mike Trizano | Get to know Joe Giannetti

In fact, Giannetti credits Cormier for helping him to add a few new weapons to his arsenal after promising the fighters at the start of the season that he wasn't going to try to reinvent them but rather just build on what already existed. In Giannetti's case, he was best known for his prolific submission skills but he still needed to polish up his striking while gaining confidence enough to hang with his opponents on the feet.

Giannetti actually ended up fighting in the first bout of the season as he made quick work of Team Miocic fighter John Gunther with a lightning fast guillotine choke submission in the opening round. From there, Giannetti just continued working under Cormier and a team of coaches that included former heavyweight champion Cain Velasquez, as well as several assistant coaches that he brought in throughout the season.

By the time Giannetti stepped into his semifinal fight against Costa Rica native Allan Zuniga, he was already showing his willingness to stand and trade with an opponent, as he effortlessly launched kicks to the head and body while using his long reach to establish a jab in the early going. It was actually Giannetti's striking attack that forced Zuniga to look for a takedown that led to a fight-ending choke in the first round.

Joe Giannetti's making sure y'all remember him pic.twitter.com/IZkn06ZDc9
— The Ultimate Fighter (@UltimateFighter) June 30, 2018

All told, Giannetti didn't even spend five minutes inside the Octagon during his two bouts on The Ultimate Fighter.

Meanwhile, Trizano came to the reality show with an equal mark of six wins against no losses while training out of the Tiger Schulmann MMA academy in New Jersey, where he trains alongside UFC stalwarts like Jimmie Rivera, Shane Burgos and Julio Arce. Prior to joining the show, Trizano competed in some of the top regional promotions on the east coast, including four fights in Ring of Combat.

The 26-year old prospect wasn't exactly sure about joining The Ultimate Fighter when the opportunity first came up, but it was actually Rivera who told him to grab on to this chance because it may not come along a second time.

Once he made it to the show, Trizano was quickly evaluated and selected No. 1 overall in the lightweight division by Miocic.

As the season got underway, Team Miocic suffered a string of losses until Trizano finally got his chance to step into the cage, where he proved he was one of the elite lightweights in the house as he dished out a second-round TKO victory over Thailand Clark from Team Cormier.

Trizano kept his head down and just kept training throughout the season until the semifinal round matchups were announced and he was matched up against teammate John Gunther, who was given a chance to re-enter the competition due to injuries suffered by other fighters in the house.

Gunther, who is known for his gritty performances, wasn't going to back down from his shot at redemption, and he definitely came to fight but that ended up bringing the best out of Trizano. Time and time again, the New Jersey native used his superior striking game to dice up Gunther, and once the third round got underway, he was in complete control while making his opponent just walk into shots as he was aiming and firing at will.

In the end, Trizano earned a unanimous decision victory to punch his ticket to the live finale on July 6.

On paper, this matchup appears to be the classic “striker versus grappler” showdown, with Giannetti testing his submissions against Trizano's standup skills. A deeper dive will show that both fighters are well versed and complete mixed martial artists, so this matchup really could play out anywhere.

Giannetti has worked tirelessly to bring his striking up to the same level as his grappling game, and it certainly showed in his semifinal fight on the show. Giannetti has some very stiff kicks that he'll use to pepper an opponent to the leg, body and head while setting up a snapping jab that will come early and often when he's throwing his hands.

Trizano is no stranger to a ground battle as well, with a pair of submission wins on his resume. Perhaps Trizano's best counter attack in this fight will be his size, as he stands 5-foot-11-inches tall, which instantly negates one of Giannetti's usual advantages as the taller, longer lightweight fighter.

This fight really could go anywhere, and judging by their performances outside the UFC and from The Ultimate Fighter, Giannetti and Trizano are more than ready to prove they belong inside the Octagon.