The final to determine the featherweight winner of The Ultimate Fighter: Undefeated will feature two of the more underrated competitors to compete on the show this season.

Canadian fighter Brad Katona was definitely one of the most unassuming athletes coming into the season, with a soft-spoken nature and a look that didn't exactly scream professional fighter. Perhaps it was because of his quite demeanor and glasses that made Katona look like Clark Kent, but when he stepped into the cage, he definitely transformed into Superman. 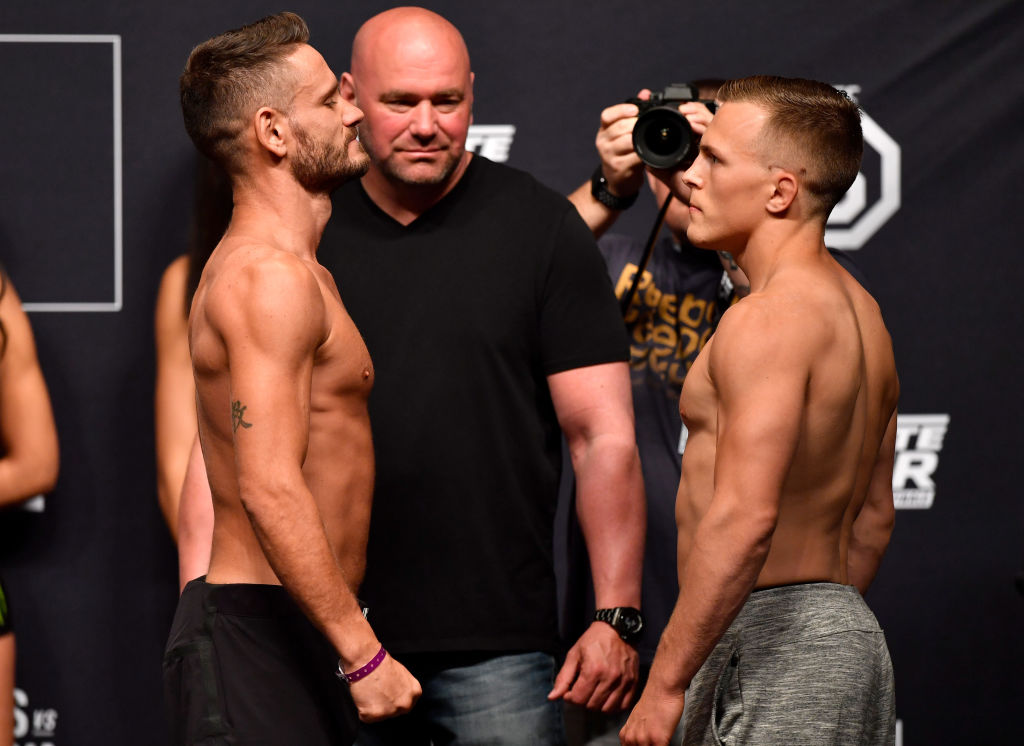 While his career started in Canada, Katona decided that he needed to take his training to the next level if he ever wanted a chance to compete amongst the best fighters in the world in the UFC. That's when Katona heard an interview with SBG Ireland head coach John Kavanagh when he talked about his most famous student - Conor McGregor.

During that interview, Kavanagh said that he wanted to train other fighters to reach the same level as McGregor to prove that his method works. Katona felt like that interview was speaking directly to him because he immediately packed up his bags and, along with his girlfriend, went to Ireland to train with the team for a month. Things went so well during that initial tryout that Katona decided to make his move to Ireland permanent and that's where he's been ever since.

At Team SBG, Katona is not only working with the former two-weight world champion in McGregor, but he's also got a laundry list of top athletes to help him get ready for his fights. In addition to the best possible training partners, Katona also has coaches like Kavanagh and lead striking coach Owen Roddy to ensure he's ready for whatever is thrown at him during a fight.

Through his first six wins, Katona notched three victories by finish and three more by decision, which shows he's got the conditioning to go all 15 minutes if necessary. His three finishes have ended with two submissions and one knockout.

Katona is definitely best known for his ground skills, but that doesn't mean he won't show off his complete mixed martial arts arsenal.

During The Ultimate Fighter, Katona earned a majority decision over Kyler Phillips in the opening round before pulling off arguably one of the more unexpected upsets as he submitted teammate Bryce Mitchell by third-round rear naked choke to earn his way to the live finale on July 6.

The only person in the house who may have pulled off a more surprising run to the finals is his upcoming opponent, Jay Cucciniello.

As a member of heavyweight champion Stipe Miocic's team on the show, Cucciniello was confident that he would be one of the best fighters in the featherweight division.

The British standout carried an 8-0 record into the house with all eight of his fights coming by way of knockout or submission. In fact, Cucciniello had only been out of the first round twice previously in his career and he still managed to get finishes in both of those fights as well.

Cucciniello also had the advantage of receiving valuable advice going into the show as he trains with Ultimate Fighter season 17 veteran Luke Barnatt, who competed on the show in the middleweight division. Barnatt was certainly a good source of information to help prepare Cucciniello for what he would experience both in training and with living in the house for six weeks while being cut off from the world.

Unfortunately, Cucciniello's plan to work his way to the finals hit a massive speed bump in his opening round fight when he faced off with Bryce Mitchell from light heavyweight champion Daniel Cormier's team. Cucciniello put up a valiant fight but still ended up losing a unanimous decision to the featherweight from Arkansas.

Sadly, several fighters on the show did experience injuries after a rough opening round in the tournament, and that left a slot available for a featherweight to return to the competition. Cucciniello was so anxious to get his opportunity at redemption that he even told UFC President Dana White that he would move up to lightweight if that's what it took to get a second chance.

Cucciniello was given another opportunity and he managed to pull off an upset victory over Tyler Diamond, who had to be one of the biggest favorites to go to the finals after a dominant performance on the show and a pedigree built while training at Team Alpha Male in Sacramento. Still, Cucciniello managed to pull off the win to earn his slot in the finale against Katona.

When it comes to this matchup, Cucciniello will almost certainly look to use his reach and size to give Katona problems, as he walks around as a much more natural featherweight than his Canadian counterpart. Katona has typically fought at 135 pounds most of his career so he'll have to find a way to deal with Cucciniello's reach and power during this fight.

Of course, Katona has shown incredible versatility in his fights, not to mention an iron will that is seemingly unbreakable. Katona's ability to fight back from adversity helped him earn the win against Mitchell in the semifinals.

As for Cucciniello, he spent several tours of duty fighting overseas for the British Army, so he's no stranger to high pressure situations. He'll likely draw on that ability as he steps into the Octagon for the first time, which can be a rather intimidating situation for most fighters.
From there it all comes down to Cucciniello putting together the right kind of game plan to deal with Katona's skill set and toughness over the course of three rounds.

Who will become the featherweight winner of the latest season of The Ultimate Fighter? Tune in tonight to find out.