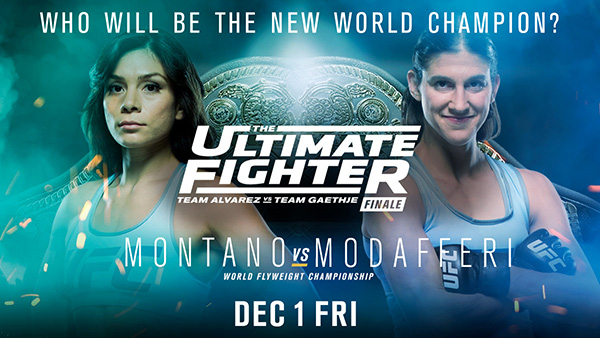 A new champion will be crowned this Friday at The Ultimate Fighter 26 Finale, as the women's flyweight division officially gets underway.

In the main event, veteran contender Roxanne Modafferi will look to strike gold as she takes on Nicco Montano, with the winner becoming the first UFC women's 125-pound champion.

In addition to the main event, two competitors from that Ultimate Fighter 26 tournament will meet as Lauren Murphy faces off with Barb Honchak. And speaking of The Ultimate Fighter, former winner Andrew Sanchez will also be back in action against Ryan Janes while Joe Soto takes on Brett Johns in a very intriguing fight at 135 pounds.

In today's fantasy preview, we'll examine these fights and several more to see who has the edge going into Friday's event and if anybody is primed for the upset at The Ultimate Fighter 26 Finale in Las Vegas. 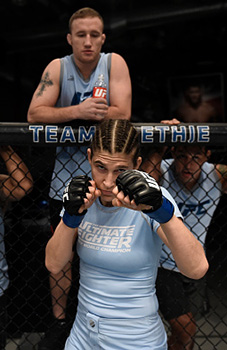 In a late change to The Ultimate Fighter Finale, Roxanne Modafferi will now get another shot at redemption as she faces Nicco Montano to determine the UFC’s newest world champion.

Modafferi is a veteran fighter with more experience than virtually anyone else who competed on the show this season, so stepping into a title fight on a day's notice isn't likely to rattle her one bit. Another advantage that Modafferi will have taking this fight is that she trained alongside Montano each and every day, as both fighters were part of Justin Gaethje's team on the show.

Modafferi is a very well rounded fighter who has best been known for her grappling over the years, but she has really added a lot of striking weapons to her arsenal while working with head coach John Wood out of Syndicate MMA in Las Vegas. Her improved striking, along with a ground-and-pound arsenal, earned Modafferi two wins by TKO during The Ultimate Fighter as well as a TKO in her most recent pre-TUF bout while competing in Invicta FC.

Where Modafferi might struggle is getting Montano to the ground in the first place.

Montano showed incredible takedown defense throughout her time on the show, and her clinch work was one of the best weapons she used all season long. Montano put on several gritty performances by going to a decision in three straight fights while taking out a murderers row of competition on the show. While Montano doesn't have the same level of experience as Modafferi, she's been training for a five-round fight and has shown the ability to get better with each passing minute. If Montano can set the pace and really push Modafferi around the Octagon, she could tire her out over five rounds to win a decision.

Still, Modafferi's experience against top-notch competition can't be ignored, and this fight will take place under the bright lights in Las Vegas, which is a much different animal than competing inside The Ultimate Fighter gym with very few people looking on. That all adds up to advantages for Modafferi, who could pull off an incredible turnaround to become champion on 24 hours’ notice.

Prediction: Roxanne Modafferi by submission, Round 3 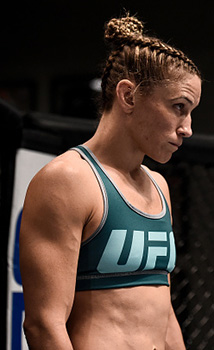 In a classic matchup pitting two top-notch grapplers against each other, former Invicta FC champion Barb Honchak will look to get her first win in the UFC as she takes on Lauren Murphy.

At her best, Honchak was considered the top 125-pound women's fighter on the planet thanks to a relentless style inside the cage where she would overwhelm her opponents with a pressure-heavy game where she would dismantle most opponents on the mat. That might be a harder fight this time around considering Murphy's own grappling credentials, where she's earned her own fair share of wins on the mat.

Neither fighter is best known for being a prolific striker but Murphy has faced some stiff competition in the UFC at 135 pounds so she's no stranger to throwing hands with bigger, stronger opponents. That being said, Honchak has shown real improvements in her striking while competing on The Ultimate Fighter, so it's entirely possible that she'll be completely comfortable if this turns into a kickboxing match.

Still, it's tough to imagine that Honchak won't try to take Murphy down and punish her on the mat. Murphy is very solid with her takedown defense, but she's also comfortable fighting off her back, so she might be more susceptible to going to the ground and getting into those grappling exchanges with Honchak. On the ground, it's a very even fight, but if Honchak is on top, it's going to be awfully hard to shake her loose.

Over the course of three rounds, takedowns and ground control could do the job for Honchak to earn a decision win.

A pair of fast rising bantamweights will meet at The Ultimate Fighter Finale as undefeated prospect Brett Johns gets the stiffest test of his UFC career when he meets former title challenger Joe Soto.

Johns has looked impressive through his first two fights in the UFC, with a strong ground game coupled with a growing striking attack on the feet. Johns hasn't been the most dynamic finisher in his most recent fights, but he's still very dangerous and can't be taken lightly no matter where this fight takes place. Through his first two fights, Johns has averaged a whopping seven takedowns per 15 minutes in the Octagon, but he might struggle a bit more getting this fight to the ground.

Soto is a former college wrestler who used to train alongside names such as Jon Jones and Colby Covington when he was living in Iowa. Now Soto is a veteran UFC fighter currently riding a three-fight win streak and only looking better and better with each performance. Soto hits hard and lands with volume to the tune of nearly four significant strikes landed per minute. Soto has taken a few too many punches during his UFC career, but he's gotten a lot better defensively in his past few fights. Where Soto really excels is in the scrambles when he's either looking for a takedown or defending the takedown.

As good as Johns has been throughout his career, Soto might be able to take advantage of those scrambles in a fight like this. Johns loves to press forward and look for the takedown, but if he can't get Soto to the ground, he might find himself fending off submissions and eating punches on the mat. Soto is a relentless finisher when he gets somebody into trouble and he won't hesitate to look for the knockout or the submission in this fight. Still, Johns has shown incredible durability, so while he might suffer his first loss on Friday, he should still make it to the final horn.

Former Ultimate Fighter winner Andrew Sanchez suffered the first setback of his UFC career in his last fight but he'll look to get back on track when he faces Canadian fighter Ryan Janes.

Sanchez is an incredibly dominant grappler with high-level takedowns and world-class Brazilian jiu-jitsu on the ground. Sanchez got caught in his last fight, but that was after he was controlling the fight through the first two rounds. Sanchez will look to establish himself again this time around with a strong offensive attack that will likely feature a lot of ground work as he looks to punish Janes on the mat.

Janes is no slouch and he's faced a couple tough losses in his most recent fights. Janes lands with very good volume on the feet with more than five significant strikes per minute, and that output will help him if he can keep this fight with Sanchez standing. Unfortunately, Janes’ aggressiveness on the feet could end up being a blessing and a curse if Sanchez can take advantage by planting him on the mat as he steps forward with a big striking combination.

Once Sanchez has the fight on the ground, he's all about position and control before looking for the submission. He'll absolutely go for the finish if the opening is there, but he's also suffocating on top and that's where Sanchez will likely look to stay once he gets Janes on the ground. 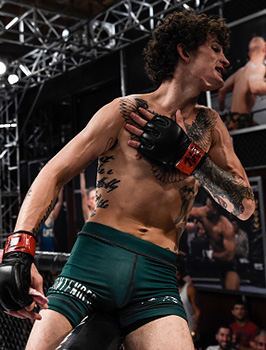 Undefeated prospect Sean O'Malley will make his UFC debut this weekend after an eye-opening win on Dana White's Tuesday Night Contender Series that earned him a contract. O'Malley is not just a knockout striker - although he has four wins in a row by way of KO - as he's also got a very solid ground game and works with a high level team at the MMA Lab in Arizona. O'Malley is an ultra exciting prospect joining the roster and he'll look to put on a show this weekend.

Now make no mistake, Terrion Ware is a veteran who will not be a cakewalk for O'Malley in his debut. Ware is a grinder with power in his hands, and if he can clip O'Malley during an exchange, he can absolutely pull off the upset.

Still, it's tough to pick against O'Malley in this situation with a chance to shine under the spotlight in this fight. Look for O'Malley to apply pressure with an aggressive game plan early until he finds an opening to put Ware away before the final horn sounds.

Prediction: Sean O'Malley by knockout, Round 2

Following a pair of submissions to start his UFC career, Gerald Meerschaert suffered his first setback in the Octagon with a loss to knockout artist Thiago Santos earlier this year. Never one to be deterred, Meerschaert is back, this time taking on a fellow grappler in Eric Spicely.

On paper, Meerschaert will be the bigger, more physically imposing fighter in this fight as he'll likely look to muscle Spicely around the Octagon before taking him to the ground to begin fishing for a submission. Meerschaert is solid on the feet, but he's currently averaging more than three and a half takedowns per fight in the UFC, so it seems like only a matter of time before he tries to drag this one to the ground.

That's where Spicely will have the opportunity to surprise him.

The former Ultimate Fighter competitor is very slick on the mat with a lot of grappling experience as well, and it will only take one mistake from Meerschaert before Spicely attacks an arm or his neck to look for the submission. Spicely will be giving up some reach on the feet so he has to be careful about getting inside, but Meerschaert will likely be the aggressor looking to take this fight down to the mat anyway. Of course, Meerschaert is a force on the ground and if he gets Spicely into trouble, there's a good chance he'll add another finish to his resume.

Still, Spicely loves nothing more than pulling off the upset and he's got the kind of jiu-jitsu arsenal that can give anybody headaches. All it takes is one slip up from Meerschaert and Spicely will be all over him looking for the finish and that's why he remains a solid upset pick for this card.

Prediction: Eric Spicely by submission, Round 2