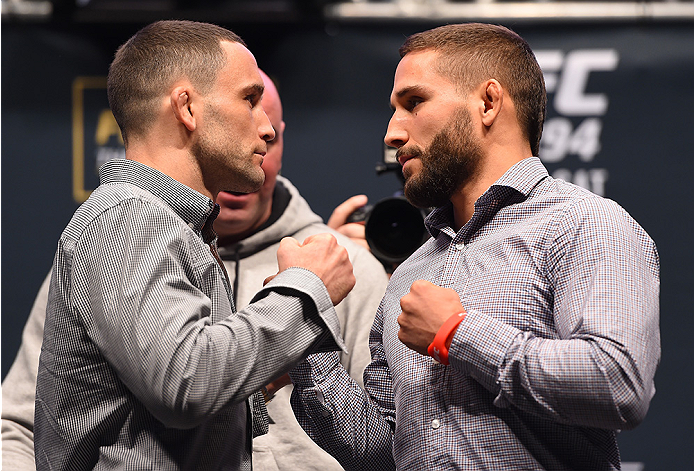 Artem Lobov will attempt to cap off his spectacular run on The Ultimate Fighter with another finish, as he takes on late replacement Ryan Hall. Hall steps in for Saul Rogers, who was unable to compete on the show due to visa issues.
Hall is actually a great prospect for the future, with world class jiu-jitsu skills to boot, but he's got a tough road ahead of him this weekend.
Not only is Lobov a nasty, one-punch knockout artist, but he also worked with Hall just a couple of months ago as the American traveled to Ireland for training. At the time, neither of them knew they'd be fighting, but Lobov likely found out right away how he matched up with Hall on the ground, which is the place he'll end up in the most danger during this fight.
If Hall can't latch on to one of Lobov's legs early or find a way to drag this to the ground, he's probably in for a long night. Technically, it might be a short night because Lobov isn't trying to make it to the third round. Many times he doesn't even allow the fight to make it past the first.
Prediction: Artem Lobov by TKO, Round 2
Tony Ferguson (-160 favorite) vs. Edson Barboza (+140 undedog)
The odds in the lightweight featured bout between Tony Ferguson and Edson Barboza are really close, so this is by no means an automatic lock, but there are a few reasons to believe one fighter has a solid advantage over the other.
Ferguson has looked like a world beater as of late, thanks to a dominant string of victories, including finishes over Gleison Tibau and Abel Trujillo before a suffocating performance over Josh Thomson in his last fight. Ferguson gets in his opponent's face and doesn't let up on the pressure until the fight is over. He works extremely well from the clinch and his wrestling is second to none in the division.
If all those things go well for him, it's going to be tough for Barboza to unleash the hellish striking arsenal that works best at a distance. Barboza might have the most punishing leg kicks in the entire sport, but he needs space to work and that's something Ferguson rarely affords his opponents. Unless Ferguson makes the gargantuan mistake of standing on the outside and winging punches with Barboza, he should be able to find an opening before putting the Brazilian on the mat.
Once the fight lands there, Ferguson lands strikes in succession and has a wide array of submissions in his arsenal, including a nasty D'arce choke.
Prediction: Tony Ferguson by submission, Round 3
UPSET SPECIAL
Mike Pierce vs. Ryan LaFlare
Mike Pierce will return to action for the first time in more than two years following an injury-induced layoff, and while he's certainly got the odds against him when he takes on welterweight prospect Ryan LaFlare, this is one fighter to never count out until the fight is over.
Pierce has been one of the toughest matchups at welterweight over the last few years, going 4-1 over his past five fights. He is an impossibly strong fighter for the weight class and he's got a great wrestling base that could give LaFlare trouble if he opts for that style of attack. It can't be ignored that LaFlare was absolutely stifled dealing with Demian Maia's takedowns in his last fight and Pierce is certainly a higher caliber wrestler than the Brazilian.
When Pierce has lost outside of his last defeat in the Octagon, where he was caught in a heel hook early in the first round, he's been nearly impossible to deal with, even while facing the best of the best in the division. Pierce fought both Johny Hendricks and Josh Koscheck to split decisions in fights he arguably could have won.
If Pierce comes back healthy, he could put pressure on LaFlare with a heavy wrestling and clinch game that could give him rounds on the judges' scorecards, and that adds up to a victory at the end of the night. Make no mistake, if Pierce isn't on point after his long layoff and LaFlare is able to take advantage of that, this fight could shift in momentum in a hurry.
Prediction: Mike Pierce by split decision