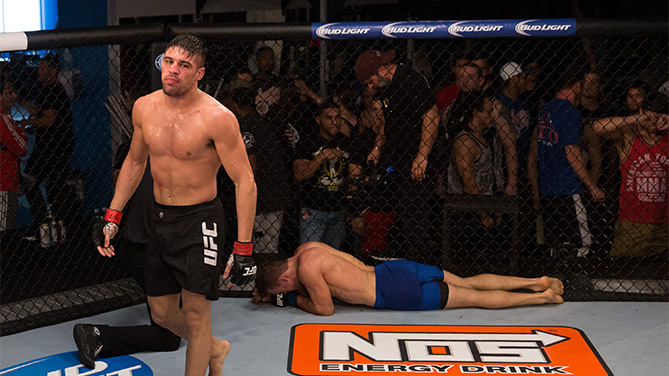 Famed race car driver Bobby Unser once said “success is where preparation and opportunity meet.”  Those are wise words that should haunt the fighters from American Top Team after another tough loss in the latest episode of The Ultimate Fighter dropped them to 1-6 overall in the competition as the Blackzilians picked up another huge win this week.

Before Nathan Coy ever stepped into the Octagon to face Vicente Luque from the Blackzilians, the coaches and owners from American Top Team led a spirited meeting with the team to try and light a fire under them after a slew of lackluster performances.  Everybody on the show wants the team to win, but the end goal for all of the fighters is to earn a shot to compete in the UFC.  Through seven fights so far this season, the only person on American Top Team that's shown that kind of hunger and dedication is Hayder Hassan, who finished off his opponent in just 48 seconds.

The other six fighters who have gone into the cage with the Blackzilians have all come out with their heads hung low while trying to figure out where it all went wrong.  The downtrodden nature of the fighters mixed with an abysmal record in competition is starting to drive the owners from American Top Team absolutely crazy.

Founder Conan Silveira decided to sit the fighters down this week and explain the level of competitiveness that fuels his every move and how losing to the Blackzilians is crushing him right now.  He's also watching fighters with all the talent in the world just handing away wins while witnessing the chance of a lifetime just disappear. 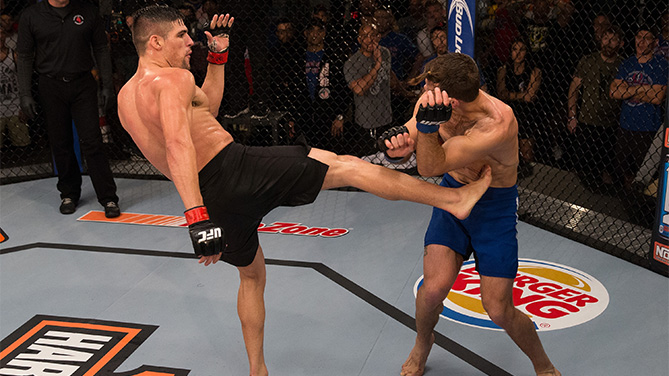 When it comes to success on American Top Team this season, opportunity has been presented, but preparation has failed to materialize when it comes time to fight and Silveira isn't happy about it.

This week also marked the first time in show history when the coaches were able to select up to two different fighters from the teams to be replaced by new choices that might help out in the overall competition. From the American Top Team side, they had a lot of possibilities but ultimately chose to only replace Steve Montgomery, who was already forced to leave the show a few weeks back after he suffered a seizure when his weight cut went haywire.

American Top Team chose Cristiano “Soldado” Souza, who joins the show with a 7-1 record overall. Souza is best known as an explosive striker who comes from a Capoeira background.  He will step in for Montgomery, but there's no assurance that he'll actually even get the chance to fight this season. 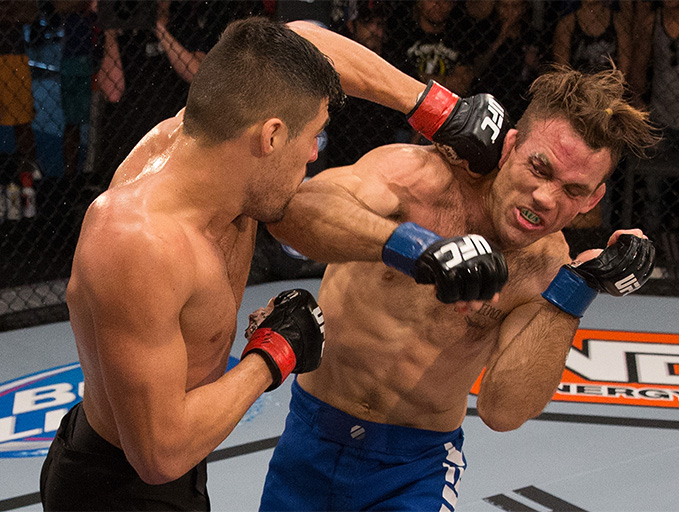 Dana White notes that Lambert was going to ride or die with the team he selected, so only choosing to replace the one fighter who already left the show was exactly what he expected out of the American Top Team owner.  Still, Lambert and his coaches hope this change is something that can help ignite some fury inside the fighters to go out and beat up some Blackzilians to turn this show around.

"Everything that happened before is done. The show starts now," Din Thomas, former UFC fighter and American Top Team coach said to the team.

On the Blackzilians side, there's not much handwringing to do about choosing a new fighter because almost everybody that's fought so far this season has won. The only odd man out is Andrews Nakahara, who is being forced off the show because he was handed a 30-day suspension by the Florida Athletic Commission after he was knocked out in his fight with Hayder Hassan.  Much like American Top Team, the Blackzilians will only replace a fighter because they had to, and owner Glenn Robinson selected Alexandre “Pulga” Pimentel  to step on to the team for the rest of the competition.

Pulga is a world-class Brazilian Jiu-Jitsu competitor with several championships under his belt while coming from the Carlson Gracie lineage.  He is well known for a nasty omoplata (shoulder lock) and has amassed an impressive 13-1 record since transitioning to MMA.

When it comes down to the fight selection this week, American Top Team wastes no time calling on their captain Nathan Coy to step in and hopefully save the season for them while the Blackzilians turn to Vicente Luque, a veteran fighter with a 7-4 record. 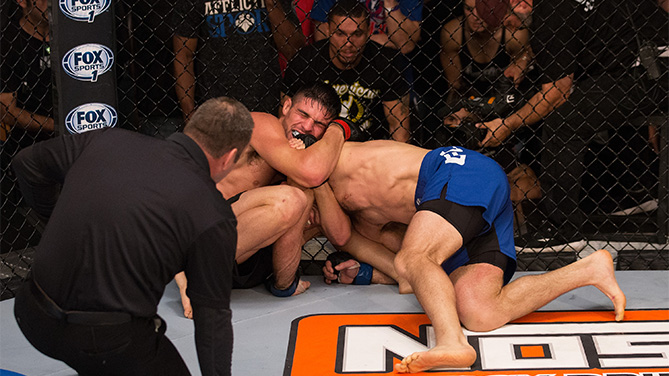 Coy had to be an early favorite to win multiple bouts for American Top Team this season, but he hasn't had a chance to compete until now, which means he may only fight twice if things play out in his favor. Luque stepped into the fight with little to no pressure on him because he knew Coy was possibly American Top Team's last hope while the Blackzilians were comfortably ahead in wins and points so far this season.

The fight between Coy and Luque ends up being one of the best for the entire season after these two welterweights engaged in a true war of attrition.

As soon as the fight started, Coy began fishing for takedowns but Luque stuffed him early and even opened a huge cut over his eye with a series of elbows he unloaded while attempting to stop his opponent from dragging them to the mat.  A little blood doesn't slow Coy down, but he's still unable to get his wrestling going for the rest of round one, which puts the score in Luque's favor.

Round two went to Coy after he employed a wrestling-heavy attack and this time he was able to put Luque down on the mat and keep him there for more than just a few seconds. Luque tried to wrap up and arm or a triangle choke from the bottom, but he was trapped against the cage and Coy was able to wiggle free each and every time.  Blackzilians' coach Michael Johnson yelled at Luque to stop looking for a submission late because it wasn't going to get him the win, and being stuck on the bottom would look bad to the judges. 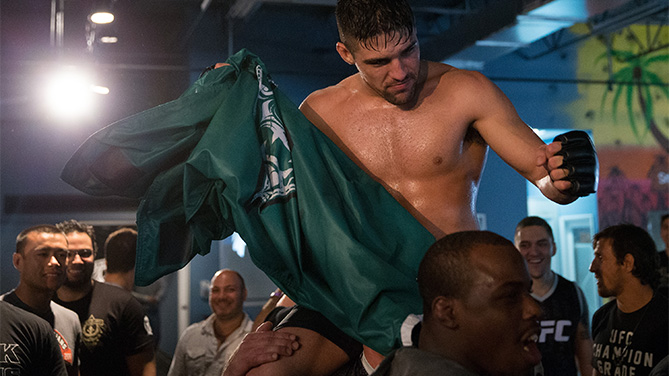 Sure enough, when the round was over, the judges deemed the fight tied up at one round apiece, so Coy and Luque went to a third round.

This time, Luque's submission game worked after Coy shot in for a takedown following a nasty kick to the body that softened him up.  Coy's sloppy shot after getting his ribs crunched left him open for a counter and Luque wasted no time wrapping up an anaconda choke.  Coy tried to fight free, but to no avail, and he was forced to tap out.

Luque jumped up in celebration as did the rest of the Blackzilians following their sixth win overall while taking out Coy, who had to be seen as one of the bricks the American Top Team foundation was built upon this season.

Chants of “go home ATT” fill the Blackzilians' gym and owner Dan Lambert is left pondering what comes next after another humiliating defeat, which moves American Top Team to 1-6 in the competition while the score reads 200-50 overall.

"Our margin of error keeps getting smaller and smaller," Lambert said. 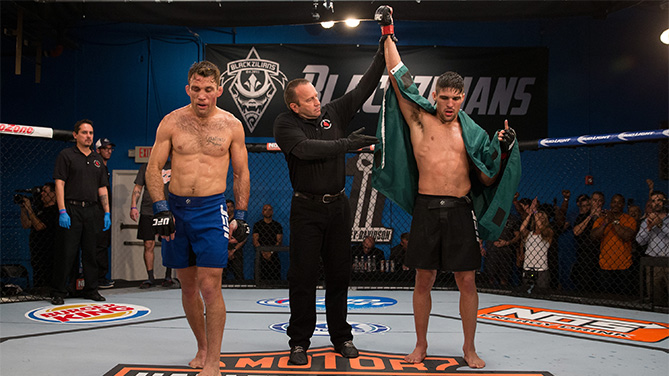 There's only one more 50-point fight left to go before the stakes rise again, and the odds that American Top Team can still come back to win this competition are astronomical. The Blackzilians will look for win No. 7 and a final 50-point victory next week to take yet another step towards total domination during the season.

Is there any chance American Top Team can find a way back into this competition?  Could the new alternate Cristiano “Soldado” Souza get the call to try and inject some new life into his team or will someone else get brought back to try and right the ship?

The only way to know for sure is to tune into the next episode of The Ultimate Fighter next Wednesday night at 10pm ET on FOX Sports 1.