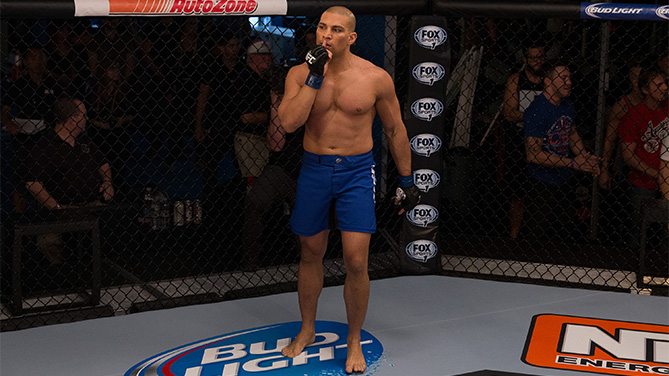 It was a celebration five weeks in the making, but American Top Team finally got on the board during this week's episode of The Ultimate Fighter, as Hayder Hassan stepped up and finished Andrews Nakahara with a blistering first-round knockout in a fight that lasted just 48 seconds.

American Top Team was in desperate need of a performance like that and Hassan delivered in the biggest way possible as he crushed the Blackzilians just like he promised he would do and he did it in devastating fashion.

Before the fight started this week, American Top Team was a group dealing with a lot of turmoil, so the victory was that much sweeter at the end of the day. 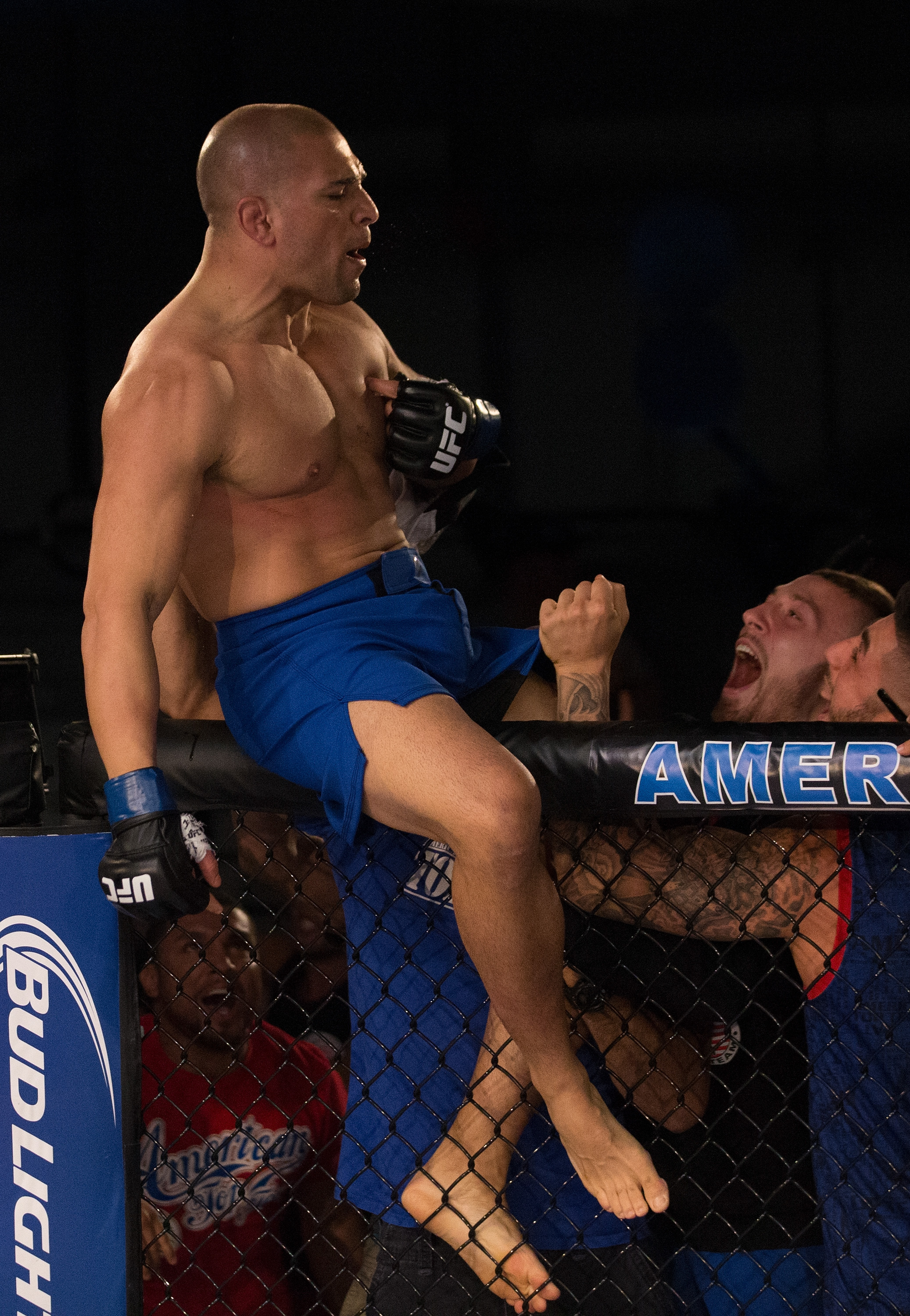 Sabah Homasi opened the episode still reeling from his controversial three-round decision loss to Carrington Banks a week ago.  While team owner Dan Lambert essentially said that sometimes the judges will score it your way, sometimes it goes the other way, Homasi definitely wasn't abiding by the “live and let live” policy after having a win taken away from him.

"It killed me. I couldn't believe it," Homasi said.

The loss put American Top Team down 4-0 and 100 points overall in the competition.  So far, the veteran squad from Coconut Creek, Florida had tried putting up young fighters, veterans and at least one guy who they all believed was an ace in the hole and none of it resulted in a win.

"Nothing is working for them," UFC President Dana White said about American Top Team's efforts so far in the competition.

The Blackzilians are still riding high as the episode began this week, especially after top-ranked light heavyweight contender Anthony Johnson stopped by the house to see his friend Carrington Banks, who was fresh off a win over Homasi last week. Johnson is one of the biggest and brightest stars working at the Blackzilians camp, and he stands as a shining example of what a fighter can become with hard work and determination by their side. 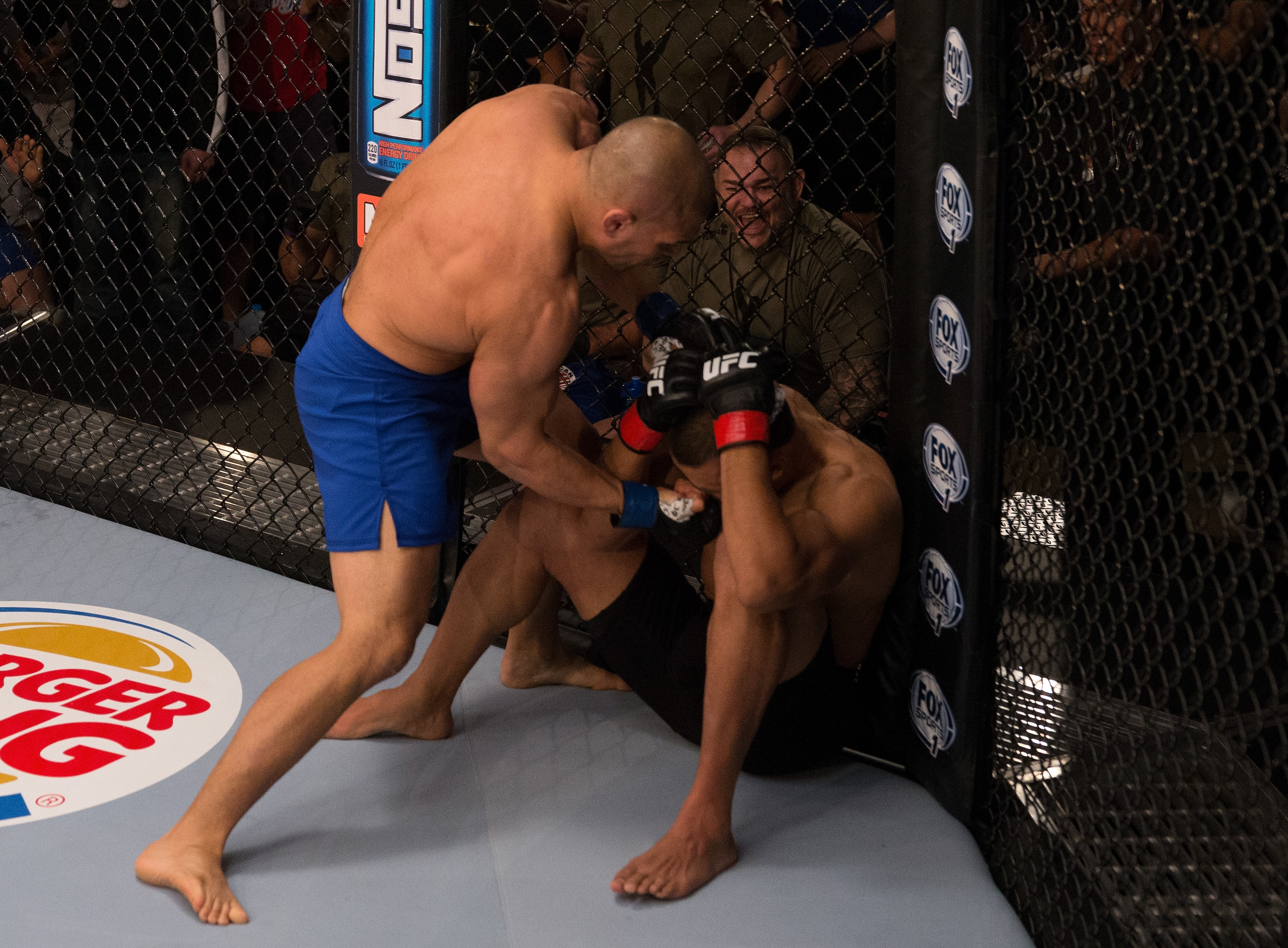 Determination is a big part of the lesson taught by striking coach Tyrone Spong this week because he knows as well as anybody that a win streak can result in a lot of confidence and positive emotion, but it only takes a split second distraction to see it all come crashing down around you.  He reminds his fighters as they prepare for the matchup at hand this week that it probably feels really good to win four fights in a row over American Top Team, but the last thing they can do is take their eye off the big prize.

That's the half million dollar cash reward and the trophy of The Ultimate Fighter that comes at the end of the season with a winning team effort.  The Blackzilians were up, but they hadn't crossed the finish line and there is still a very long way to go until the show is over.

When it comes down to the fight selection this week, American Top Team wastes no time turning to Hassan, who has been itching to get in the cage ever since the first week of the competition started. He was dealing with a hand injury that forced his coaches to keep him caged like a pitbull just waiting for his supper and he finally gets the chance to be unleashed this week.  His opponent, Andrews Nakahara, is a former karate champion and teammate of Vitor Belfort from Brazil who actually fought Japanese legend Kazushi Sakuraba in his first professional fight in MMA.

Hassan was ready for any challenge the Blackzilians threw at him, although an altercation with Jason Jackson in the house this week had him hoping for a rematch. 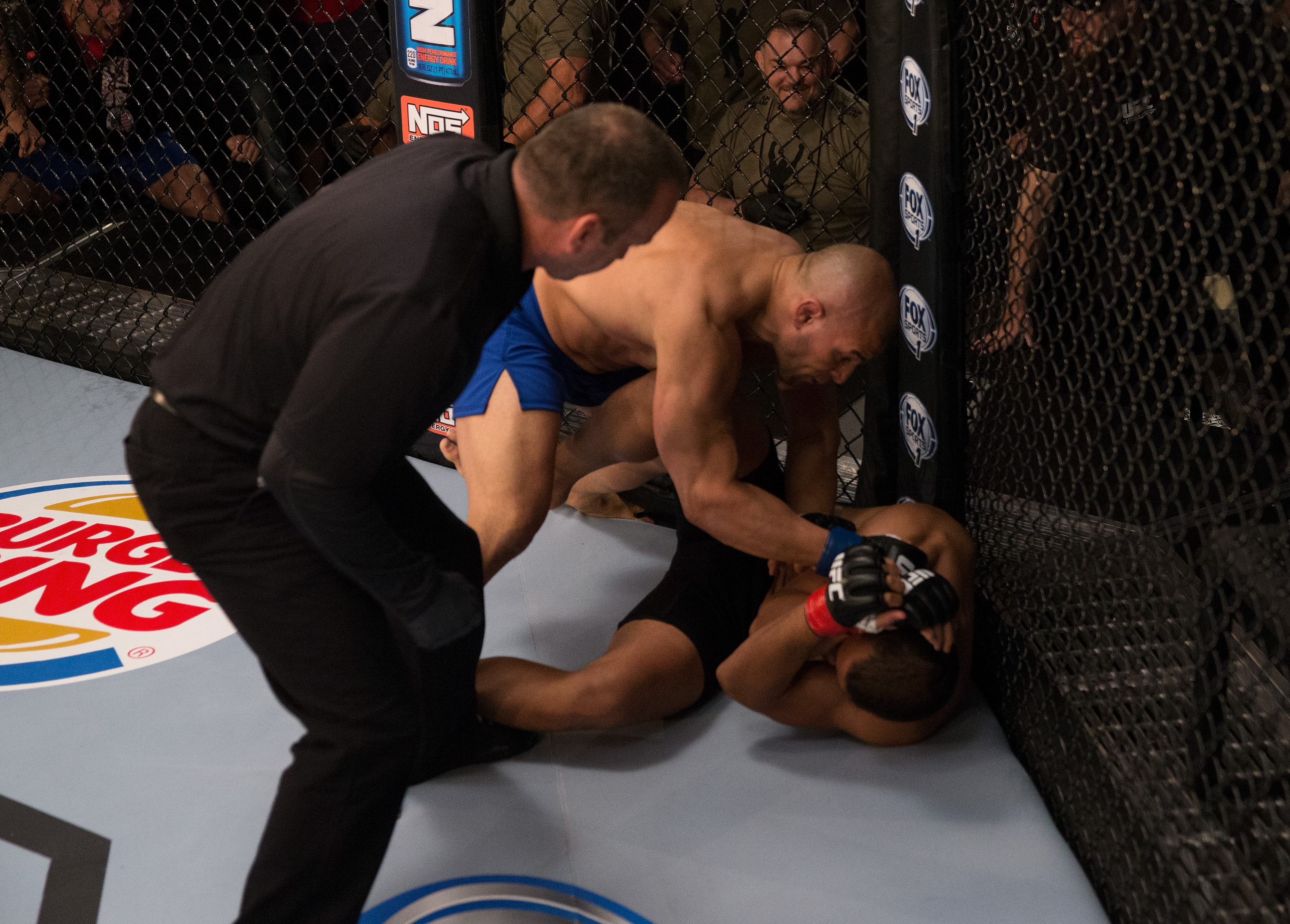 See, before the show started, Hassan beat Jackson by TKO, and this week the two fighters get into a heated argument about the end of the bout where the Blackzilians team member believes he had his hair pulled, which led to the eventual knockout. Jackson quickly accuses Hassan of being a dirty fighter and it looks like the two of them are about ready to have a fourth and fifth round in the middle of the kitchen of The Ultimate Fighter house, but thankfully cooler heads prevailed.

It doesn't mean Hassan isn't gunning for another knockout of Jackson at some point this season.

"I already did it once. I'll do it again," Hassan said.

The encounter with Jackson only serves to fuel Hassan that much more as he gets ready for his bout against Nakahara.  The American Top Team coaches know him well and believe that he is a very dangerous fighter, especially at distance, where he's able to employ a wide variety of kicks that come from many different angles, thanks to his extensive karate background. 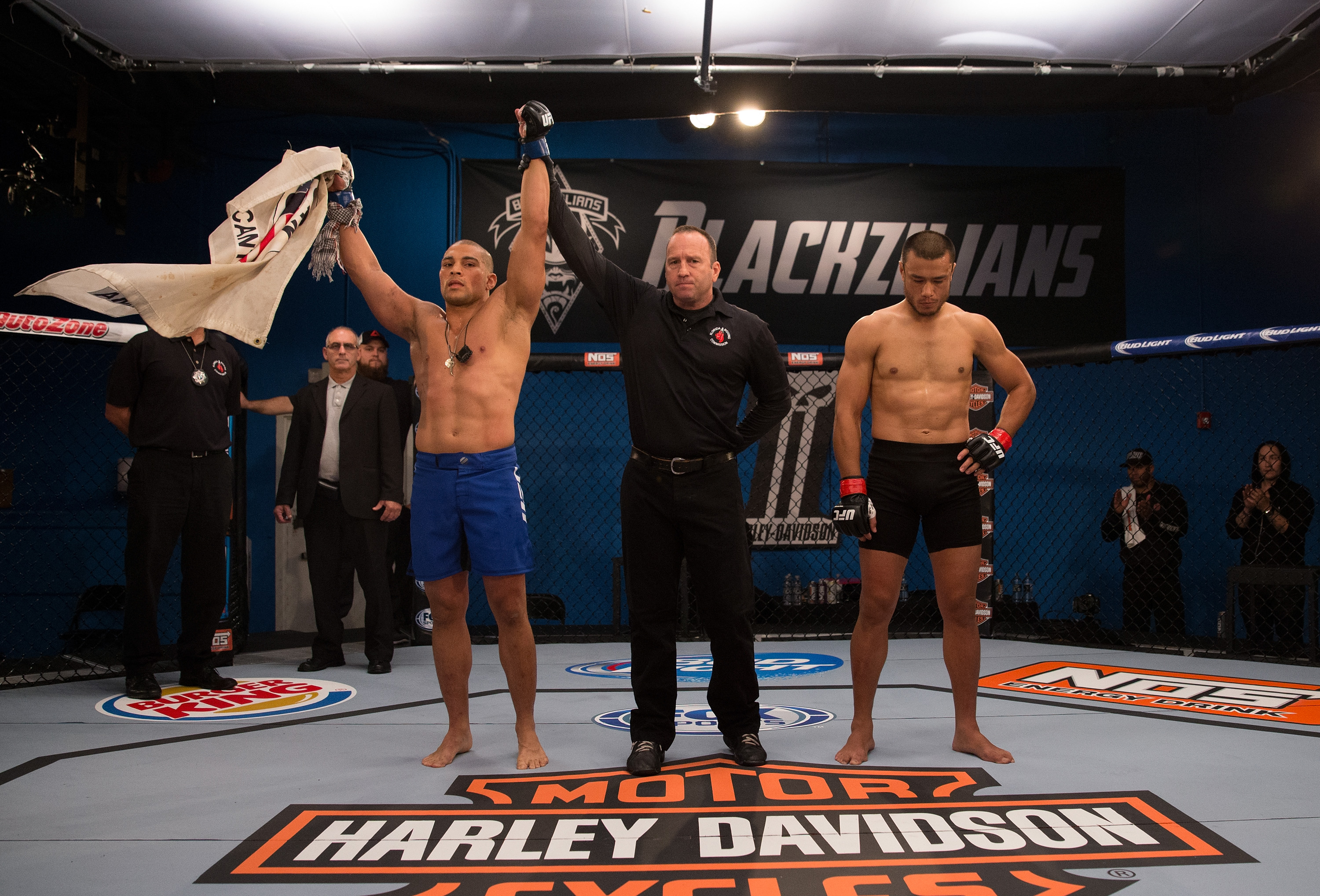 When the fight starts, Hassan wastes no time getting directly in Nakahara's face and pressuring him with big looping right hands. Nakahara is able to fend him off at first with a couple quick kicks, but once Hassan starts pushing him up against the cage, the American Top Team fighter knows he has his opponent right where he wants him.

Hassan opens up with a flurry and a right hand slips through that tags Nakahara before a left hook comes flying in from out of nowhere, absolutely crashing into the Brazilian's jaw and sending him falling to the mat.  Hassan blasts away with punches from the top as Nakahara can only turtle up and try to defend himself.  It only takes the referee a moment to realize Nakahara isn't getting up again and he stops the fight.

Hassan jumps on the cage after silencing the Blackzilians with an emphatic 48-second, first-round knockout.

He's been itching to fight all season long and Hayder Hassan wasted no time announcing his presence with authority.

Now for the first time all year long, the Blackzilians will have to travel across town to the American Top Team gym for the next fight.  One win won't get them the trophy or the money, but American Top Team may have dramatically altered the course of this entire season with one huge knockout to get them on the board and knock the smug looks off the Blackzilians' faces after a dominant start to the season.