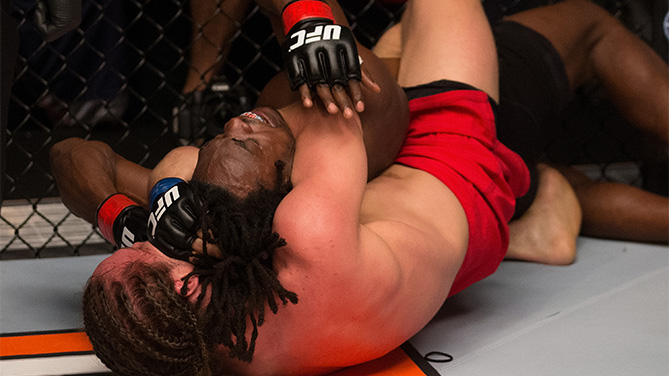 When it's all said and done, the fight that took place this week on The Ultimate Fighter might go down as the greatest comeback in the history of the show, as Michael Graves survived an early foul from Jason Jackson to somehow pull off the most improbable victory and tie the competition between American Top Team and the Blackzilians going into the final fight a week from now.

It was another must win situation for American Top Team and they turned to Graves despite part of the coaching staff voting for alternate Cristiano “Soldado” Souza to get the call instead. Graves had been wallowing in a mountain of self-pity and regret after losing his opening round matchup against Kamaru Usman, and no one was sure they could depend on the Ohio native to gut it out and get a win in the most dire of circumstances.

Meanwhile, over on the Blackzilians' side, team owner Glenn Robinson was already fired up after Valdir “BB Monster” Araujo put on a lackluster showing against Nathan Coy that allowed this week's fight to happen in the first place. The Blackzilians only needed one more win to secure the entire competition, but “BB Monster” couldn't get the job done and Robinson believed his fighters were already acting like they won when the show could still very easily slip through their fingers.

"I guarantee you the Blackzilians did not see this coming," UFC President Dana White remarks after American Top Team found a way to win, and with another victory this week they tie the competition at 300 points each. 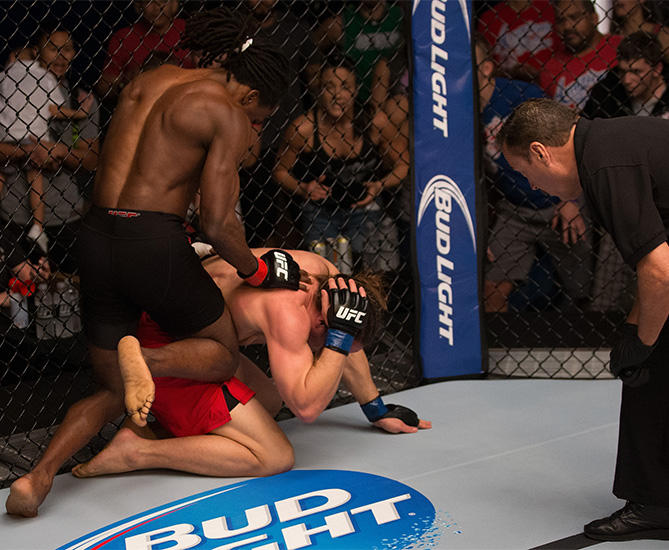 Ultimately, the Blackzilians go with Jackson for their choice after his strong showing earlier this season and his willingness to sacrifice everything to get a win. He was one of the strongest voices on the team when it appeared as if some of the fighters were already acting like the show was over.

Before the fighters stepped into the Octagon, it was time for the annual coaches’ challenge, except this year, with it being team versus team, the owners got the spotlight as they matched up in a relay race along with three chosen representatives from American Top Team and the Blackzilians.

It didn't take long for Lambert to poke fun at Robinson when it was announced that they would be running against each other in a race for $10,000 and a chunk of cash for each of their fighters.

"I'm just wondering who got clearance from Glenn's cardiologist for him to get out there and run," Lambert said. 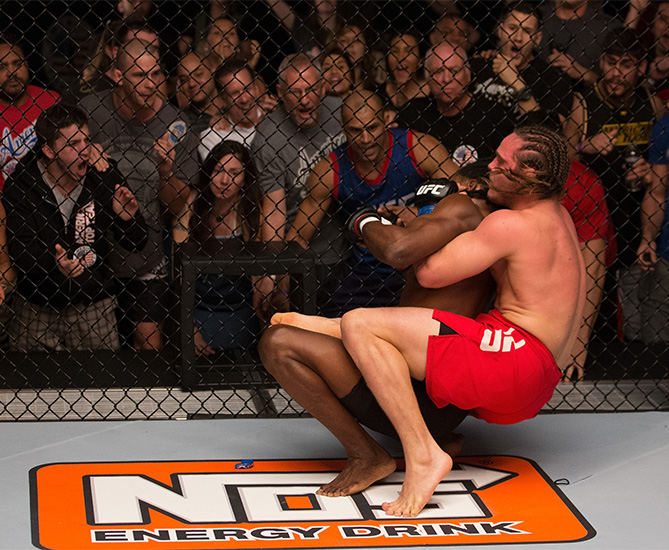 As the race started, the fighters and coaches chosen to run for the two teams were neck and neck through the first two heats, but when the baton was passed to Jackson, he put the Blackzilians ahead by wide margin. Jackson sprinted around the track while Cristiano “Soldado” Souza did his best to keep up, but he was definitely far behind by the time he passed off the baton to Lambert for the final chunk of the race.

Unfortunately, Robinson was unable to maintain the lead as Lambert caught up and passed him in the final stretch of the race and crossed the finish line first to give the win to the American Top Team.  As happy as Lambert was about winning, he still felt it was a hollow victory in the end because of his competition.

"Can't really take a lot of pride when you beat Glenn at something physical," Lambert said.

Once the coaches caught their breath and the challenge was finished it was finally time to step on to the scale and get the second to last fight into the Octagon.

Both Graves and Jackson made weight without incident, although the Blackzilians thought they gained a mental edge as the American Top Team fighter refused to lock eyes with his opponent and instead decided to stare at the ground as they faced off. 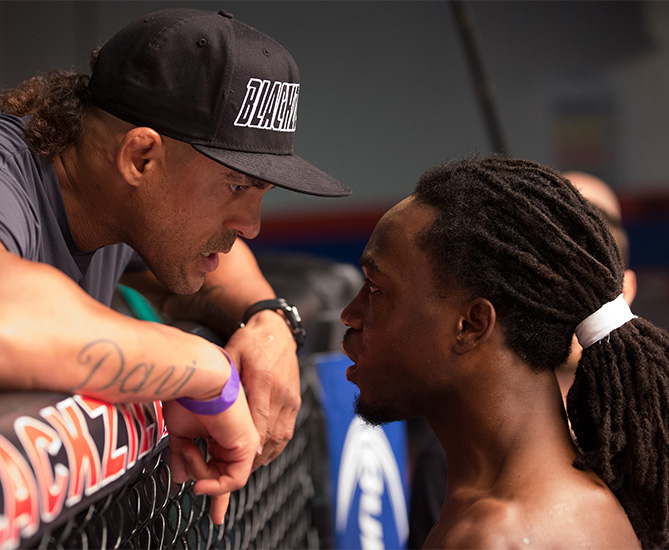 Twenty-four hours later they stepped into the cage together and it was a fight that moved with a rapid pace and things got crazy in a hurry.  Right away, Graves' demeanor and approach showed a much better mindset than he had in his first fight while facing a top-notch wrestler like Kamaru Usman, who clearly wanted to put the fight on the ground.

Graves showed great confidence in his hands and feet early, but an exchange of kicks with Jackson early in the first round nearly cost him the fight. Both fighters kicked at the same time, but Jackson's foot went higher and caught Graves in the stomach while his shin landed directly against his groin.

Graves winced in pain and fell to the ground immediately as the shin-on-cup sound resonated throughout the American Top Team gym, but despite the obvious foul the referee didn't pause the fight to give him time to recover and Jackson pounced to try and take advantage of his opponent being hurt.

Jackson cracked Graves on the mat with a series of punches and knees to the body as the American Top Team fighter could only cover up and crawl forward to avoid the damage being inflicted by the Blackzilian.  While Lambert screamed about the foul, Robinson and his team were begging for the referee to stop the fight and give Jackson the win.

Jackson continued to pour on the offense, but also landed a few shots to the back of the head, which earned him a warning from the referee. The momentary break gave Graves just enough oxygen for him to burst forward and grab Jackson's legs and upend him for a takedown. Graves wasted no time transitioning to the back and locking a body triangle around Jackson as he started fishing for the rear naked choke. 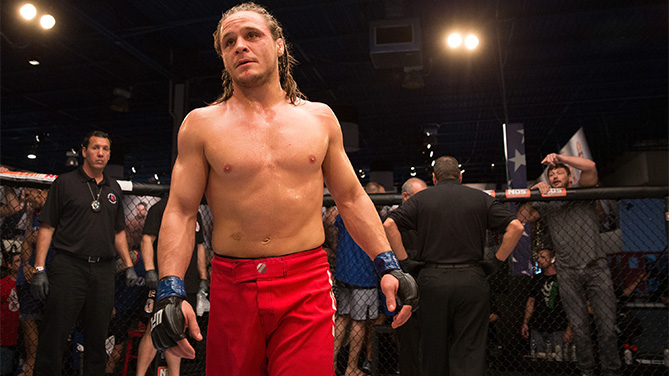 Jackson fought it off for a moment, but Graves kept working for it, and with shades of the rematch between Matt Hughes and Frank Trigg dancing in his head, the American Top Team fighter slipped his arm under the chin, wrenched up on the hold and a few seconds later he got the tap out.

American Top Team exploded with excitement as Graves pulled off one of the most incredible finishes in MMA history while the Blackzilians were distraught after watching Jackson have victory snatched away despite doing his best to finish the fight after landing the inadvertent kick.  When it was over, Robinson climbed the cage and began yelling at the referee until American Top Team founder Ricardo Liborio eventually came over to calm the situation while trying to keep the two teams from rioting in the middle of a volatile situation.

Robinson continued to stalk the referee and complain about his decision to let the fight go on after Graves was hurt early, but White agrees with the final call and if anyone had a right to be upset it was American Top Team after their fighter got fouled three separate times and still found a way to win. 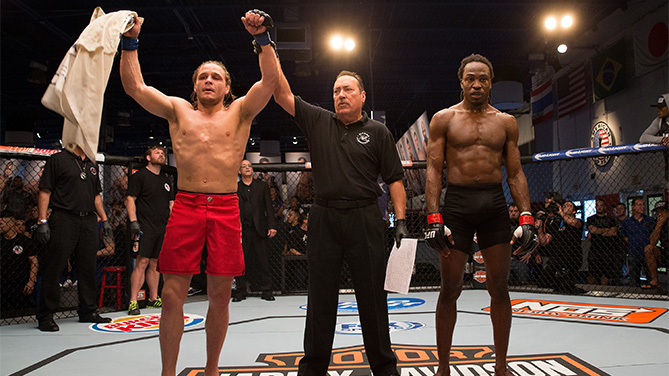 "The only one that got screwed by the ref in that one was the American Top Team, not the Blackzilians," White said.

With the win, American Top Team ties the competition for the first time since the two teams started the show and now there's only one fight and one week to go to determine the winner of The Ultimate Fighter this season.  It was a storybook moment for American Top Team and now they have a chance to pull off another improbable comeback while taking aim at the Blackzilians next week.

"You can't write this s--t," Dana White said in closing after another crazy week brings everything full circle, where one fight will decide everything.

The season finale of The Ultimate Fighter airs next Wednesday night at 10pm ET on FOX Sports 1 to determine the winner between American Top Team and the Blackzilians. It all comes down to this.