Meet the semifinalists of TUF 19 - first up, Eddie Gordon... 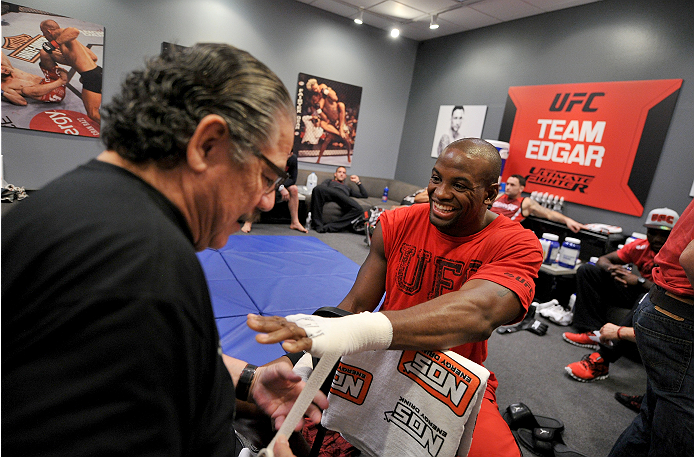 Though you probably wouldn’t want to try this with the human brick wall known as Eddie “Truck” Gordon, you could assume that you can say anything to The Ultimate Fighter 19 competitor. Just don’t call him ordinary.

“To me, that’s an insult,” said Gordon, who faces Cathal Pendred in a TUF 19 semifinal bout on Wednesday night. It’s an attitude he picked up from his parents, Jamaican immigrants who didn’t know the meaning of a day off as they raised their family. And along the way, they let their children know that the worst thing you can be is average.

“They had to work for everything,” said the Long Islander. “I’ve seen my dad work every single day, holidays, never taking time off, and it was the same thing for my mother. So they instilled that work ethic in us, and they taught us from a young age to reach for the stars. Don’t let anybody tell you that you’re normal, or average. You want to be extraordinary.”

That’s why Gordon’s here, fighting for a UFC contract and the opportunity to change his life forever. If he beats Pendred, he’s one win away from that dream, but it’s not just for him, but mainly for his two sons, DJ and Jayden, 8 and 7, respectively.

“They’re my toughest critics,” laughed Gordon. “They don’t remember any of my wins; they just remember the one loss I ever had. They’re a blessing. They keep me grounded and they keep me on my toes.”

They also provide the motivation for why Gordon put the traditional work world aside, along with his degrees from Fordham University, to chase after glory as a prizefighter. It wasn’t for the money, though that would be nice. It was much more than that.

“I was doing the whole 9 to 5, working at the bank, and a lot of my friends thought I was crazy to pursue this dream, but I always was an exceptional athlete, and I always knew that being behind a desk wasn’t for me, so I wanted to pursue it.”

“When you’re a kid, you have the biggest, loftiest dreams, and oftentimes people tell you that you can’t do it because either they’re afraid to do it or they don’t believe in themselves,” said the 30-year-old Gordon. “So I just want to teach my kids that no matter what their goals are, it doesn’t matter what people are going to think; you just have to work at it, push yourself to the limit, and no matter what it is, don’t let anybody ever tell you that you can’t achieve it. I knew right away that when I came into this sport, I ultimately wanted to be in the UFC because that’s the NFL of mixed martial arts. That’s the highest level you can go to, and I want to fight the best guys in the world. I don’t want to be one of those guys that padded his record and just walks around saying ‘look at me, I’m a fighter.’ I want to challenge myself. So this for me means everything and I’m going to work my tail off to get where I want to go, and that’s going to show my kids that they can do anything they want.”

That’s the beauty of this sport. Unlike the NFL or the NBA, where the progression to the big show begins in high school (sometimes even sooner), then moves to college and then hopefully the draft, mixed martial arts has little barrier to entry. It’s what happens once you’re in the door that determines if you go to the top or just become cannon fodder for up and comers. Luckily for Gordon, he had a friend in the business, high school pal (and future middleweight champion) Chris Weidman, who took him into the Serra-Longo fight team fold.

“It’s definitely a blessing because these guys have been around the block, they know the ins and outs of not only the fight game, but just everyday living,” he said. “To have a coach like Ray, who has cornered two world champions at the highest level, you try to take everything he says like scripture. He’s been there, he’s done that, he knows what to think, he knows when to pull the reigns back, so it’s a blessing. Not many guys have one UFC champion in the gym, let alone two, so for me, I just follow their lead, and what they say goes. I ultimately want to be where they are, and there’s no better way than to train with them.”

Owner of a 6-1 pro MMA record since turning pro in 2011, he’s definitely on his way, even if that’s not always the easiest proposition as a New York fighter.

“It was definitely tough because a lot of the scouts weren’t really coming around New York,” said Gordon. “They were focusing on guys out of Vegas and the bigger name camps, so it was a real grind, trying to find the tougher fighters to fight and trying to make a name for yourself. It definitely helped having good guys in your camp, and as they got more exposure, it opened up a few more eyes to myself. It was a blessing.”

With Weidman, Al Iaquinta, and Aljamain Sterling all finding spots and success on the UFC roster, Gordon was eager to become the next member of his squad to make it, and he assumed that The Ultimate Fighter would speed up the process. Unfortunately, the former light heavyweight saw his shot at TUF 17 fall by the wayside.

“I was on a win streak and I was also supposed to be on TUF 17, so I did that whole tryout and I figured I was right there,” he said. “They end up dropping the 205 weight class for that show and they only ran the 185, so at that point I was in a completely different weight class, so it didn’t work out. I was bummed out, but I said, you know what, I’ll get back on the horse, get a couple more fights, at that point they already knew about me and I was on their radar, so I figured if it wasn’t the show, then I’ll just have to fight my way into the UFC. Luckily enough they decided to run back the 185 class and at that point I had started fighting in that weight class, and everything happens for a reason, so it was perfect.”

On TUF 19, the Team Edgar member has defeated Matt Gabel and Mike King en route to his semifinal meeting with Pendred, and all it will take is one more W to land him on the July 6 finale card in Las Vegas. If he gets there, his biggest fans will be right behind him, with questions, critiques – and even advice - galore.

“They keep asking me when I’m going to be in the UFC video game,” laughed Gordon. “That’s their biggest concern. They follow The Ultimate Fighter show, they’ve got their favorite fighters, and if I didn’t live in the house with these guys, I’d feel like they know them better than I do.”