Meet the semifinalists of TUF 19 - next up, Dhiego Lima... 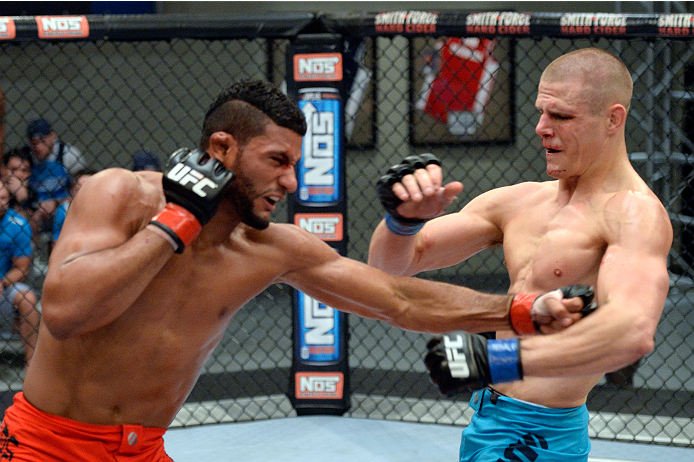 Heading into season 19 of The Ultimate Fighter, many fans and pundits believed that the favorite to take the whole tournament and a UFC contract at middleweight was a welterweight named Dhiego Lima. And if he wins tonight’s semifinal bout against New Yorker Roger Zapata, he will meet Eddie Gordon this Sunday in Las Vegas for all the marbles. But win or lose tonight and / or beyond, when his post-TUF career begins, the Atlanta resident will settle back in at 170 pounds.

“No matter what happens, I’m going to welterweight,” said Lima. “All my 10 pro fights were at welterweight, and that’s my home. I put on a little bit of weight for the tournament, but these guys are way too big. You look at Mike King, you look at Eddie, even Tim Williams, these guys are big boys. (Laughs) Even though I can compete with them, they get a little edge. In the UFC, look at Costa Philippou and Lorenz Larkin, those are some big guys.”

That edge hasn’t stopped Lima from winning twice on the show over Adam Stroup and Tim Williams, punching his ticket to the semifinals against the hard-hitting Zapata. And while tonight he will watch the show far removed from the days when the show was taping, when he looks back at his six weeks on TUF 19, it’s with fond memories.

“Six weeks were good for me,” he laughs.

It’s not surprising that Lima adjusted to the new situation and performed well inside the reality TV fishbowl, as he’s been down the road of adjustment before, most notably when he and his family moved from Goiana, Brazil to Georgia when he was a child. It wasn’t easy on the youngster, but he was resilient and he made it work.

It didn’t hurt that he had his older brother there to help him along the way, and when Douglas Lima went to the gym, eventually becoming a pro mixed martial artist, Dhiego followed, and the rest is history for both of them. Douglas is a successful veteran with a 26-5 record, and the 25-year-old Dhiego put together a 9-1 pre-TUF record that had him considered to be one of the sport’s top prospects.

“I’ve been looking up to him the whole time, and it’s just awesome having him there,” said Lima of his older brother. “It gives me that extra edge and that extra push. I want to make him proud.”

In 2012-13, Lima put together a three-fight win streak, prompting him to believe that he was closing in on a shot in the UFC.

“I felt like it was coming,” he said. “I thought I needed one or two more fights, but the way I was training and the way I was fighting with hard opponents, I felt like I was ready. I’ve been focusing on training a lot ever since I opened my gym with my brother, so it’s brought my career to a whole other level, and I felt like the time was coming. It was just a matter of time.”

That time is now. And whoever faces him now will be in a lot worse shape than if they faced him before The Ultimate Fighter 19 began.

“Just fighting three times in six weeks, it was like four fights in nine weeks for me because I just had a tough fight right before I got into the house,” he said. “So it made me a man. I knew I had heart, but I figured out I’m pretty damn tough in the sport. I feel like I’m complete now.”