Meet the semifinalists of TUF 19 - next up, Daniel Spohn... 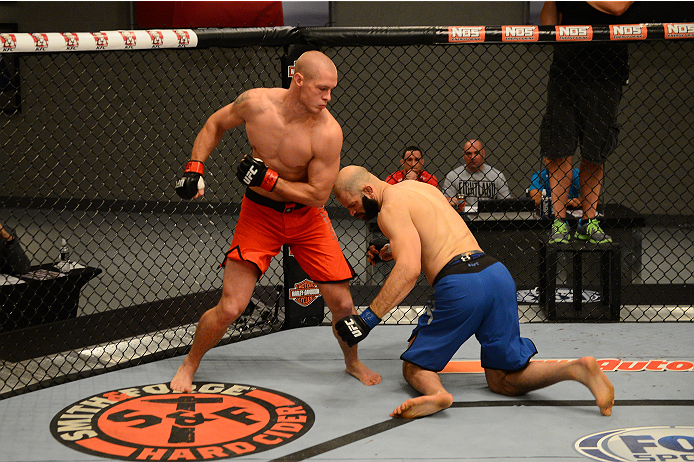 As the father of four kids, as well as a former Correctional Officer, Daniel Spohn could say that he was well-prepared for living with 15 other people during season 19 of The Ultimate Fighter.

Of course, being away from your kids isn’t easy, something Spohn found out as soon as he got to Las Vegas for taping.

“It was difficult because all they know is me being there,” he said. “Them knowing that I wasn’t going to be around them for that long was pretty hard.”

There was a method to his madness though, as a win over Matt Van Buren in tonight’s TUF 19 semifinals will put him in the light heavyweight season final this Sunday against Corey Anderson, a bout that will have a UFC contract on the line. That’s a long way from where he was two years ago, when three consecutive losses took away his unbeaten pro record and placed him at a crossroads he really didn’t want to be at.

“I never truly thought of giving up,” he said. “But of course you talk to yourself and you wonder and think about it. At the same time, I just looked at those losses and how I lost and I figured I’d change a few things, I did, and it seemed to work out for me.”

In February of 2013, Spohn returned to active duty and picked up two submission wins to up his record to 8-3. The secret? Taking matters into his own hands.

“I was really big on letting the coaches take control of everything for me, and control all the stuff that I did in my training,” said Spohn. “But I started as a traditional martial artist and did things myself, so I just took the reins a little bit more on my own and it seemed to make a big difference for me.”

And when the opportunity to take a shot at the UFC through TUF came along, he jumped on it.

“I was along the lines that I needed it,” he said. “I wanted the call and I thought it would accelerate things for me and get me way further ahead.”

A single right hand did plenty of accelerating for “Dragon” Spohn, as he entered the house with a knockout of Tyler King. A quarterfinal victory over Todd Monaghan wasn’t as spectacular, but he’ll take it, especially since it put him one win away from the biggest fight of his career. It’s an exciting, yet daunting, place to be in, as he can almost grab a spot on the UFC roster.

“Being on the verge is that hard spot,” said the 29-year-old. “You want to be there right now, but at the same time, you want it to go right and make it there the right way. It’s a tricky spot to be in, but I value it because without the journey, what’s the point of the end destination?”

It doesn’t help knowing where he ends up but being unable to tell anyone until the show airs, and what makes the waiting even worse is seeing UFC fights week in and week out, including one featuring fellow Ohio native Matt Brown against Erick Silva back in May.

“That was amazing,” said Spohn of Brown’s victory. “I know what Matt’s capable of, but even so, watching him go out there and do that, it was awesome. It makes me want to get back in there, and I would love to be in a fight like that. A fight like that is what makes it worth it.”

Only a true fighter would want to engage in a war like that, but martial arts have been a part of Spohn’s life since he took up kung fu as a 12-year-old. That must have received some interesting comments.

“I was more of a quiet guy, so I didn’t really talk too much about it, but if people did find out, they would typically would joke around about and have fun with. So it was entertaining for sure.”

Entertaining for them, but for Spohn, it began a process that still sticks with him to this day.

“It taught me a lot about training, about discipline, and what you need to do to reach certain goals and how to get better. I probably use it every day.”

And regardless of what happens tonight or in the future, that will never change.

“No matter what’s going on in life, martial arts is always there for me,” he said. “It’s something I found and learned early, and I know that I’ll never not have that. It drives me forward.”