Meet the semifinalists of TUF 19 - next up, Corey Anderson... 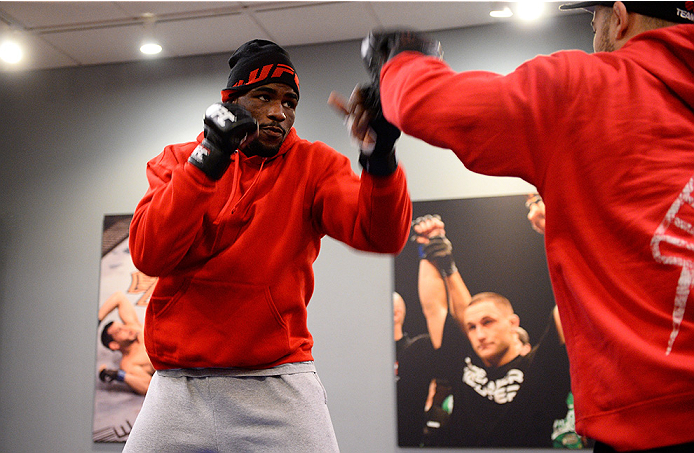 Corey Anderson just wasn’t interested. His coach, Bobby Brents, called the Rockford, Illinois native at midnight, told him about the next day’s Ultimate Fighter tryout in Indiana, and pleaded with him to go.

Anderson was tired, finishing up the shift on one of his three jobs, and despite his perfect 3-0 mixed martial arts record, he wasn’t going to make a trip that could speed up his trip to the UFC and change his life completely.

“This is a great opportunity,” he said. “I know you can go out there on short notice and make history. Come to my house after work and I’ll drive you out to Indiana.”

Anderson went, and he showed up in Indiana with a host of other MMA hopefuls, some who had dreamed about this moment for years. Anderson wasn’t one of those guys. Even TUF producer Craig Piligian noticed that there was something different about this Midwest wrestler.

“You don’t look too excited to be here,” said Piligian.

“My coach made me come,” came the candid response.

But Anderson was making an impression, not just with his honesty, but with his work during the tryouts.

“Part of me wasn’t there because I was so exhausted coming straight from work, and the other part was my father telling me ‘if you do anything, you’ve got to give it your all,’” he said. “Even though I didn’t want to be there, I had to give it my all. And I’m glad he (Brents) made me go.”

It may have been the turning point in the life of the 24-year-old, who now stands one semifinal win over Team Edgar teammate Patrick Walsh tonight from making it to the Ultimate Fighter 19 Finale card in Las Vegas on July 6. That’s a lot to handle and a lot to process for any fighter who has been watching the action in the Octagon for years and years. But again, Corey Anderson is not that guy.

“My brother watched it and was huge on it,” he said when asked if he was a mixed martial arts fan in his formative years. “He’s six years older than me, so growing up, I always had to watch him watch it, but I never really cared for it. I didn’t watch much of anything. I didn’t watch football, basketball, or baseball. I competed in sports but I didn’t watch. It was boring to me to watch on TV.”

He’s not kidding either, immediately marking him as one of the most compelling figures in MMA today. Here’s a young man who didn’t have Chuck Liddell or Anderson Silva posters on his wall, didn’t stay up late to watch Pay-Per-Views, or scour the internet in search of any tidbit of info on the sport. He didn’t even have plans to compete in the sport after he finished up his college wrestling career with All-American status in junior college and the NCAA D-III, as well as bachelors and associates degrees.

What he did want to do was give an Olympic wrestling dream a shot, but after working with current MMA standout Ben Askren, Askren persuaded him to try MMA. Again, he went back to what his dad taught him and his siblings.

“The thing my father always taught me and my brothers and sisters growing up was that if you do anything, you make sure you sit down and evaluate the situation, make sure it’s worth the time and make sure you gonna give it a hundred percent or don’t do it at all,” recalled Anderson. “It’s pointless for you to do something and waste somebody else’s time and yours as well unless you’re going to be serious about it.”

So he tried MMA, and after the first day of practice, he had a long think with himself.

“One day after I tried it, I just went home and looked in the mirror and was like ‘do you really want to do this?’ Part of me was like, no, not really, because you’re not really a fighter. But the other part was like, you’ve got that competitive urge, and without college wrestling, you don’t have anything else to compete in. You can compete in an office or on a construction site, but that’s not really what you want to do. You love working out, this is a chance to pretty much work out all day long and you can have a career. That was the final answer. The pros outweighed my cons, so I said I’m going with this 150% and that’s all it’s been since.”

Anderson turned pro in 2013, winning all three of his pro fights leading up to TUF. He’s impressed every step of the way, drawing comparisons to some of the best in the game. None of it fazes him, simply because he’s in a position where a lot of the folks he’s being compared to are people he hasn’t idolized for years.

“I had nothing to compare myself to coming into this sport,” he said. “I didn’t know anything about it, but when I did it, people kept comparing me to other people. Duke Roufus, the first thing he told me was, ‘you can be like Cain Velasquez at 205.’ Someone else told me, ‘you can be the next Jon Jones,’ and somebody else mentioned Anderson ‘The Spider’ Silva. I watched the way Silva fought, and when I transferred to a new gym, I told the coach that if I had to compare myself to what I wanted to be, I wanted to end up like Anderson Silva. But I don’t know much about other fighters, still to this day, so I’m just trying to build myself up. I want people to say that they want to grow up and fight like Corey Anderson. I have no template to base myself off of. I’m just doing what comes naturally to me as an athlete. I’m going out there and going hard. I have no fear stepping on the mat with anybody because I don’t know who you are really. I take that as a great advantage.”

So if he got an offer to fight UFC light heavyweight champion Jon Jones tomorrow, would he take it?

“Why wouldn’t I?” laughs Anderson. “As far as I know he’s just another human being. The crazy thing is though, going through college, that was my brother’s favorite fighter.”

Now he has a new one, the kid who didn’t even want to watch UFC back in the day.  And his brother won’t be the only new fan Corey Anderson picks up along the way, as this thing is only getting started.

“I’m just a normal person with crazy dreams to be the best in the world.”