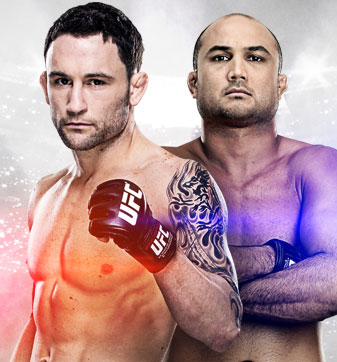 Less than 24 hours after the action ends at UFC 175, The Ultimate Fighter season 19 finale will hit the Octagon, where two new winners from the long standing competition will be crowned, along with the five-round featherweight main event pitting Frankie Edgar against BJ Penn for the third time.

Edgar and Penn coached opposite one another on the show years after the pair shared two lightweight title fights where the New Jersey native came out on top both times.  As a matter of fact, Penn's desire for revenge was ratcheted up by this season of the reality show after watching Edgar's team produce all four finalists for the show on Saturday.

Speaking of which, Team Edgar's best and brightest will also be featured, with Matt “Gutter” Van Buren taking on Corey Anderson in the light heavyweight division while Eddie “Truck” Gordon takes on Dhiego Lima in the middleweight final of TUF 19.

It's a packed card with two former champions headlining and a slew of up and coming talent rounding out the show.  In today's fantasy preview we are going to break down those fights and see who has the advantage come Sunday night to help get the most points possible and walk out with a victory when the show is over.

BJ Penn wanted nothing more in this world than to avenge his two previous losses to Frankie Edgar, so UFC president Dana White gave him the shot in what could be a make or break fight for a legendary career. Penn has been the best of the best at welterweight and lightweight, but this will be his first test as a featherweight as he takes on one of the best pound-for-pound fighters in the sport while trying to erase the memory of two previous fights.

Edgar was a machine in both of his fights with Penn, getting better in the second go round versus the first.  In their rematch, Edgar out struck Penn by a lopsided margin of 94 to 36 in significant strikes and 142 to 56 in overall strikes.  He also took Penn down three times and really appeared to get more dominant as the fight wore on.  The scariest part about this third fight? Edgar might be even better now.

Edgar has landed the fourth most significant strikes in UFC history while also managing to land the third most takedowns in lightweight history.  He lands 3.35 significant strikes per minute and mixes in about two and a half takedowns per 15 minutes inside the cage.  Edgar is an impossibly hard fighter to figure out because there's no telling where his attacks are going to come from, and he's comfortable everywhere the fight goes.  Edgar's boxing might be some of the best in the UFC, working with coach Mark Henry, and his speed didn't diminish because he's facing fighters closer to his size at featherweight.  If anything, he got even faster.

So it's going to be a long road for Penn to travel to find a way to beat Edgar on the third attempt.  The future UFC Hall of Famer has been an absolute destroyer throughout his career, but he's managed only a 1-4-1 record in his last six fights although four of those were at welterweight.  Prior to his losses to Edgar, Penn was a wrecking machine at lightweight, which was probably always his best division, but now cutting an additional 10 pounds to get to featherweight, it's unknown how he will adapt.  Penn has one of the best jabs in the sport, and his takedown defense rates as the fifth highest in lightweight history, but those statistics are hard to tout when there are two fights worth of material out there of him facing Edgar, and losing both times.

If Edgar approaches this fight with the same vigor as the last two, he will come out victorious again.  The worst thing he could do would be to somehow walk into the cage on Saturday unmotivated to face a fighter he's already beaten twice before, but given Edgar's blue-collar mentality, hard work is what he does best and the opponent doesn't really matter much.  Edgar's boxing will get stronger as the rounds move forward, and his conditioning is untouchable.  Penn may steal a round early, but it's going to be a shutout late, with Edgar walking away a unanimous decision victor for the third time against the Hawaiian.

Team Edgar light heavyweights Matt “Gutter” Van Buren and Corey Anderson will square off for the TUF title this year as both fighters look to impress after an admittedly slow season of fights on the show.

Matt Van Buren is a long, rangy striker, who uses his tall frame to keep opponents at the end of his punches, but he's not afraid to get into a slugfest, as witnessed in his bout with Dan Spohn in the semifinals on the show.  Van Buren has a rock-solid chin and good wrestling to compliment his game as well.  He trains out of Alliance MMA in San Diego, so he's working with coach Eric Del Fierro on his striking, which means he has the same trainer who prepares fighters such as Dominick Cruz, Jeremy Stephens and Myles Jury getting him on point before stepping into the Octagon.

Meanwhile, Corey Anderson is a superb athlete coming from a wrestling background where he was coached by former U.S. Olympian and MMA fighter Ben Askren.  Anderson has an outstanding grappling base, but his striking has evolved tremendously over the last year as he's established a great jab and a thunderbolt for a right hand, which lands with snap, crackle and pop. Like Van Buren, Anderson knows how to use his reach to keep opponents on the outside or dip in to use his power on the inside.  Since the show ended, Anderson has been training full-time with Edgar and his team in New Jersey, so he's only been improving working alongside coaches like Mark Henry and Ricardo Almeida.

On the feet, these two are similar fighters with good reach and real power when putting their combinations together.  Where Anderson excels ahead of Van Buren and where he will likely take over this fight is with his wrestling and ground attack.  Even if Anderson chooses to only use it as a defensive mechanism to throw Van Buren off his game, it's enough to slow down his former Team Edgar teammate and opens up other opportunities in his offensive game.  Van Buren is tough as nails so he won't just fade away, but Anderson is a real prodigy and could be a force at light heavyweight given a few more years to develop.

His career should start off well with an Ultimate Fighter title to add to his resume.

The other final from TUF 19 is definitely one of the hardest fights on the entire card to pick.  Eddie Gordon is a powerhouse prospect who trains out of the same gym as middleweight champion Chris Weidman and is a legit 185-pound fighter.  Meanwhile, Lima comes from one of the most talented camps in the world at American Top Team and actually has a more diverse MMA game, but is realistically a welterweight masquerading as a middleweight.

Gordon showed during the season of The Ultimate Fighter that he packs a serious punch while also mixing in a solid wrestling base.  He trains boxing with coach Ray Longo, jiu-jitsu with former UFC champion Matt Serra and his best friend is Weidman, who just happened to be preparing for a world title fight at the exact time Gordon was getting ready for this one.  It can't hurt him at all that the best 185-pound fighter was working alongside him day in and day out as he got ready for his fight.

Lima is a very fundamentally strong striker with a nasty jiu-jitsu game that earned him two wins on the show to get him to the finals.  Lima kept facing fighters who wanted to take him to the ground, so he kept submitting them to get the victory.  In this fight, it's more than likely Gordon will want to keep the fight standing, but is that really what best serves Lima to win?

In reality, Gordon is a physically stronger fighter and if he can muscle Lima around the cage he should do enough to get a decision win by the time the final horn sounds.  Gordon is game for any kind of fight, and he's had some close calls previously, but that kind of experience also means he knows how to pull out those last few punches or takedowns necessary to get the judges to score the fight in his favor.  One thing to note, however, is Lima will certainly have a bright career ahead of him once he drops down to a more natural 170-pound division.  Given enough time, Lima could be a top ten-level fighter, but he's got a tough test to pass going up against a legit middleweight with enough power to negate his natural talent.

Two of the brightest prospects in the flyweight division will meet at the TUF 19 finale when Justin Scoggins takes on Roufusport fighter Dustin Ortiz.

Scoggins is a spark plug at 125 pounds, blitzing his opponents with a ridiculously intense pace where he lands 4.45 strikes per minute while averaging just over six takedowns per 15 minutes spent in the cage.  Even more impressive than those statistics are the accuracy with which he strikes and wrestles. Scoggins is incredibly accurate, with 62.86-percent of his strikes finding a home, while he employs 61.54-percent accuracy with his takedowns.

Ortiz will definitely be his toughest test to date, however, as the 16-fight veteran brings with him a wealth of fight experience and a serious training camp backing him up.

Ortiz works with coach Duke Roufus and his team in Milwaukee, which includes lightweight champion Anthony Pettis as well as his younger brother Sergio Pettis.  He wrestles during the week with Ben Askren, and has a plethora of jiu-jitsu practitioners to help him develop his ground game.  Ortiz - like Scoggins - hits with volume and accuracy on the feet while mixing in a wrestling game as well.

The difference in this fight is Scoggins' ability to do the things Ortiz does just a little bit better.  He's slightly better on the feet and on the ground, and over three rounds those differences will start to appear more clearly as he pulls away a little further with each minute ticking on the clock.  By the time the clock is filled with zeroes, Scoggins should be standing victorious with his third UFC win and a chance to draw a top ten opponent in his next fight.