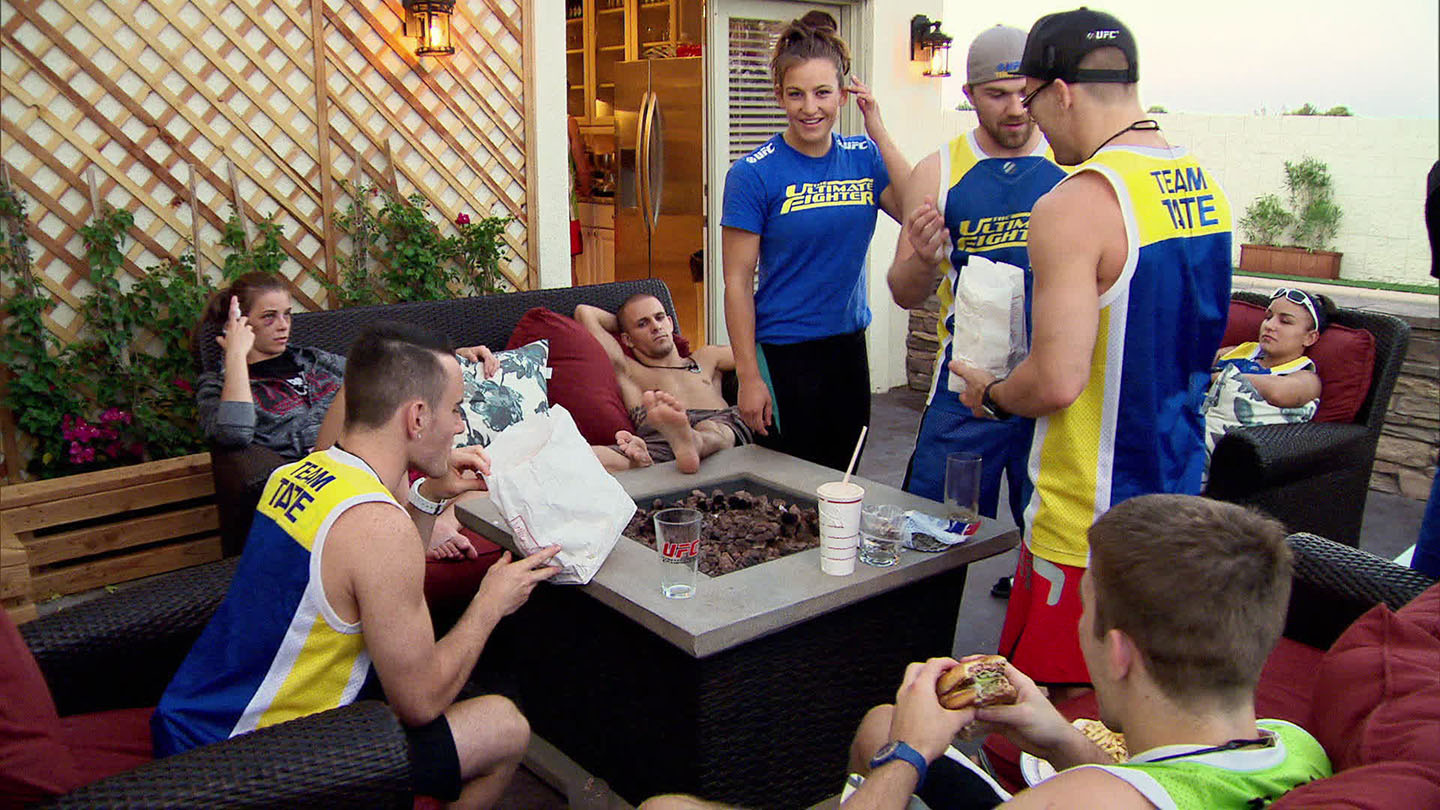 The episode opens up at the TUF house with Miesha stopping by to deliver another celebratory meal for Josh Hill and Michael Wooten who fought two weeks ago. If that whole fighting thing doesn’t work out, maybe Miesha and Bryan could open up some type of fast food delivery service for fighters with cravings. One man that won’t be eating a cheeseburger any time soon is Cody Bollinger. He still has a lot of weight to cut for his upcoming fight with Anthony Gutierrez.

While Cody worries about his weight, we hear from Anthony. Try as he might to hype his chances, it feels like there isn’t a lot of confidence in his voice. He calls Cody, “The most accomplished guy here,” and describes himself as a “gamer.” In the fight world, gamer is code for “I don’t look that great most of the time, but when it’s fight day I exceed the low expectations.” He also promises that the fight will be a bloodbath, but it’s not entirely clear whose blood will be on the mat. Coach Rousey continues the not so emphatic praise. “He looks good. He actually looks better,” and follows that up by calling him “annoying and squirrelly.” I suppose squirrels can be pretty vicious.

We transition back to Cody Bollinger who’s transitioning between the treadmill and sauna to drop the last few pounds. No one ever looks good at this point, but he seems worse than most. 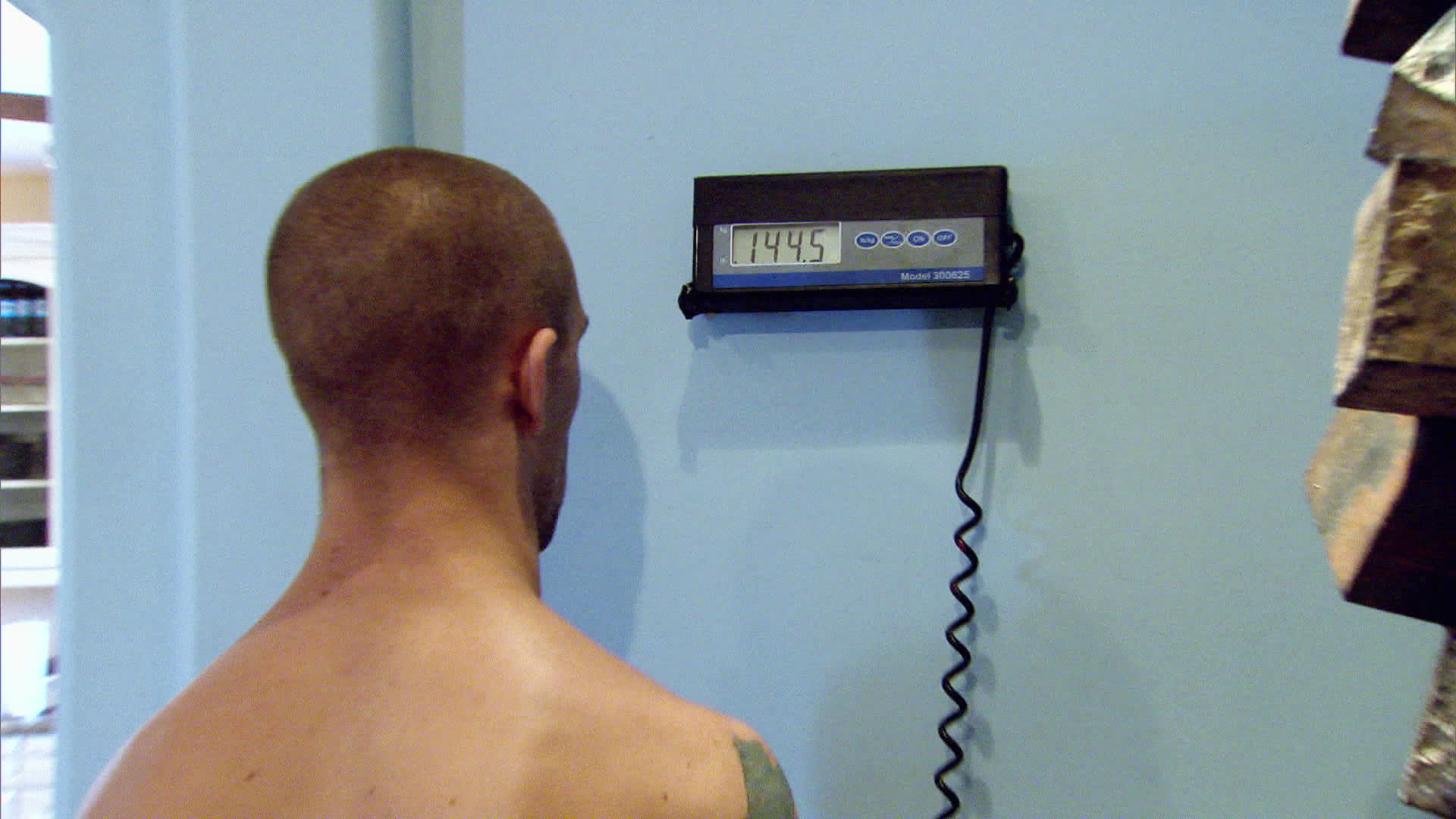 He steps on the scale and he’s at 141 (5 pounds over the 136 bantamweight limit). The Team Tate coaches conference and they’re starting to worry. In the last 2 hours, Cody hasn’t lost a single pound. This news seems to be the final straw and Cody starts to mentally break. He wants to stop and the coaches try to talk him into keeping it going. Miesha even busts out a picture of his daughter and tells him to do it for her. Cody tears up and Coach Tate busts out a line that should live in TUF infamy, “Good! You got tears, you got water in you.”
After a break we’re back at the TUF house and people are giving a last ditch effort to get Cody to lose the weight. Raquel Pennington and Roxanne Modafferi try to support him, but he throws in the towel and starts drinking his coconut water. Cody even admits himself that he quit. Miesha is visibly upset and laments, “It’s hard to see someone let their dreams slip through their fingers.” The entire situation was preventable and Cody does not seem to have many people feeling sorry for him. Dana White calls an emergency meeting because he wants Cody to tell everybody what he did. He admits to everyone that he mentally broke and doesn’t give any excuses. Dana yells at him for wasting this opportunity and tells him to walk out the door and not come back. On the way out, Cody says, “I just don’t want to have to tell my wife and kid. This was my [expletive] shot . I [expletive] up.” 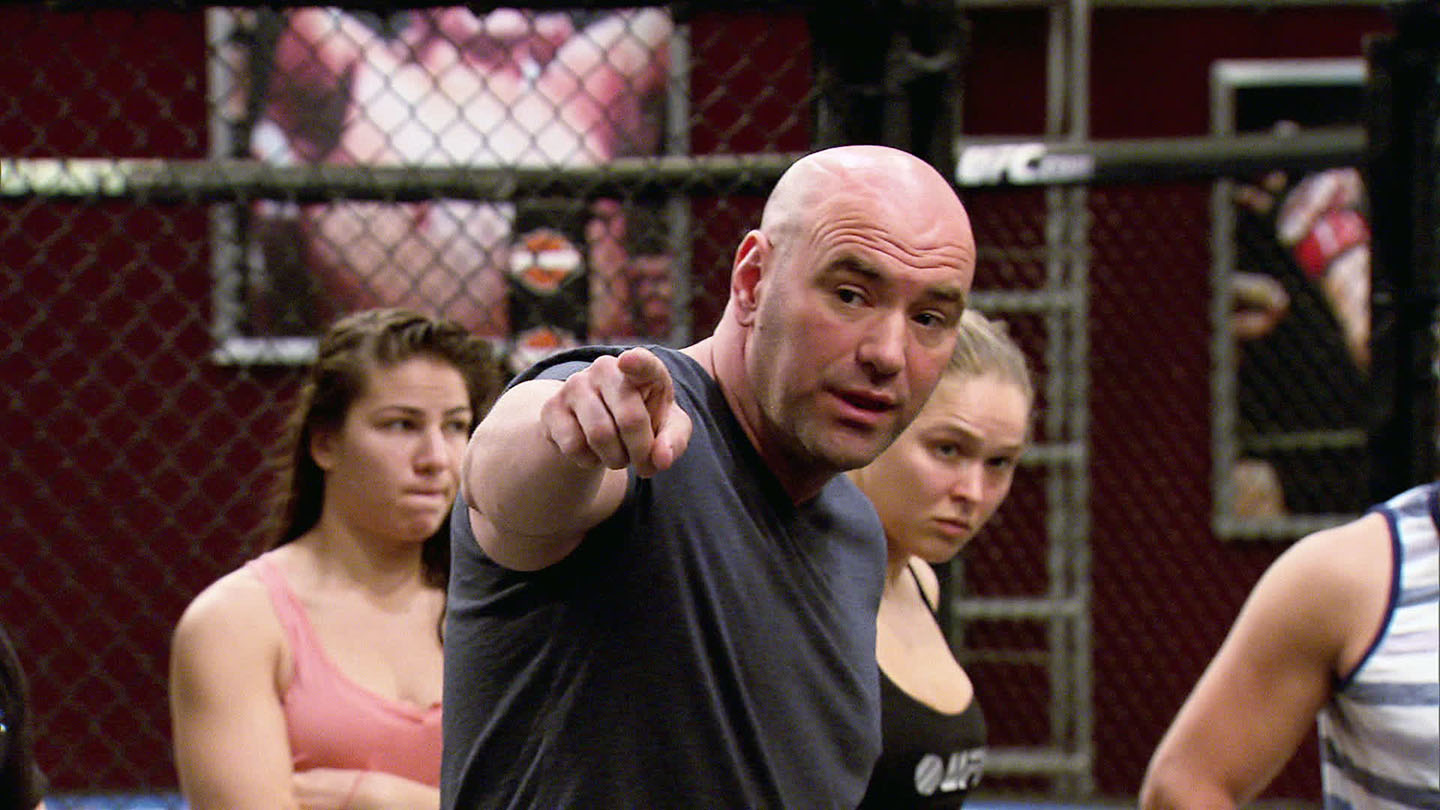 As they scramble for resolutions, the options break down into two: 1) Delay the fight. Give Chris Beal another shot and weigh in again in a couple days or 2) Forfeit the fight. They call Anthony into the office to have him decide. He takes the prudent course and chooses the forfeit. He realizes that while it would be sexier to take the fight and be cavalier about it, but he takes the prudent course and accepts the forfeit.

After the weight cut debacle we transition to the final preliminary round fight between Sarah Moras and Peggy Morgan. We first hear from Sarah who describes her opponent as “a giraffe,” because she’s pale, ginger and tall. Sarah’s path to MMA began with an old boyfriend who introduced her to the sport. Both Sarah and Miesha realize that Peggy is the biggest girl in the house, but they don’t think the size difference will be that much of a factor. Sarah plans on getting it to the mat and utilizing her ground and pound.

Back at the house we hear from Peggy who’s missing her son Oliver. When asked what his mom does for a living, Peggy says that he tells people, “Momma fights in a cage.” A professor of literature and composition at Southern New Hampshire University, she tells us that she just fell into an MMA career. She started with boxing and kickboxing to stay in shape and it just progressed from there (you’d think that a lit professor would concoct a better origin story). Ronda says the keys to victory are Peggy using her reach and avoiding takedowns against the fence.

These weigh-ins progress without any drama and then it’s fight time.

The round begins with Peggy following the gameplan. She keeps Sarah at the end of her reach and controls all the engagements with straight punches. Sarah answers with a low kick, but Peggy counters with a jab, cross combo that connects. Sarah shoots in for a double leg, but 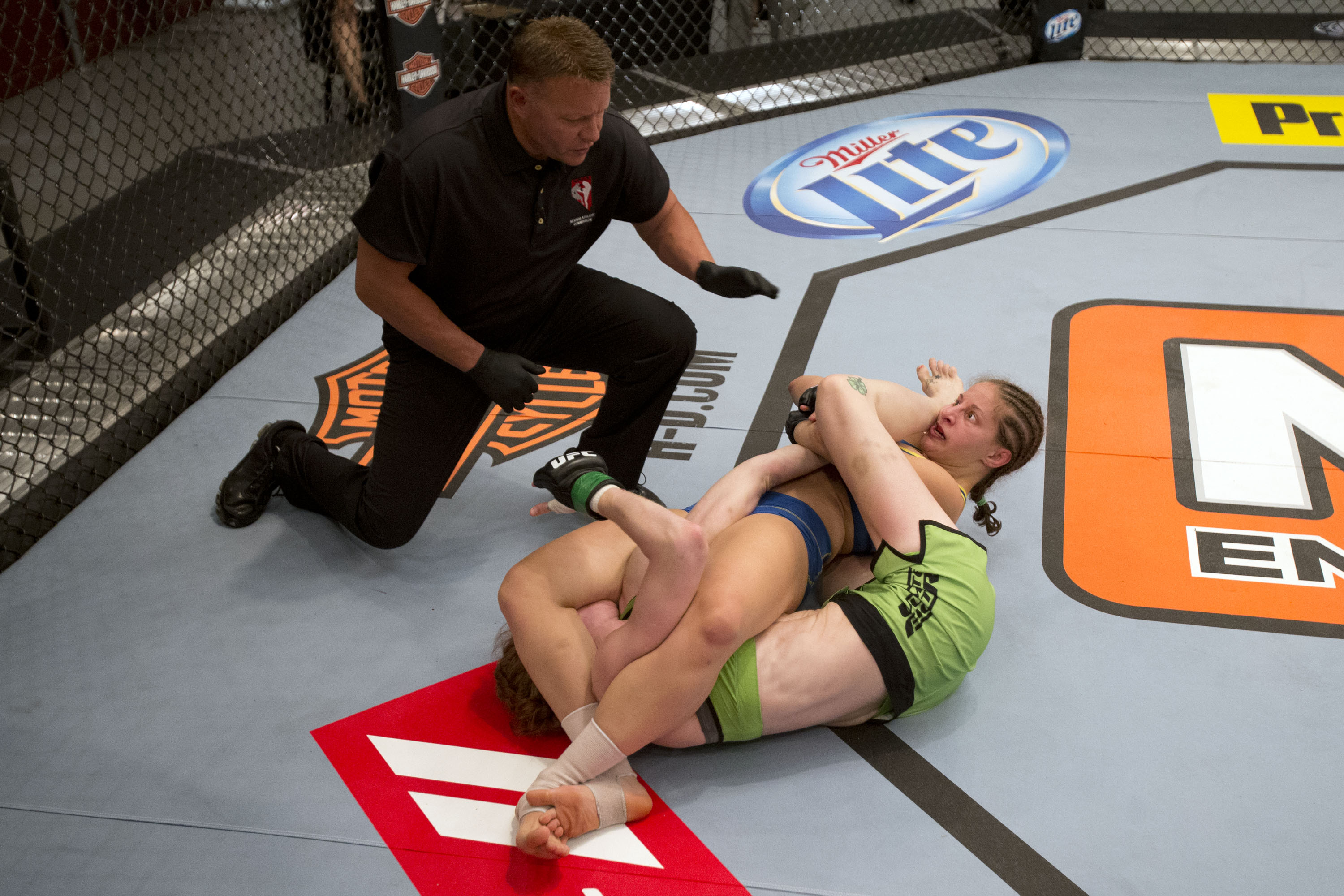 Peggy sprawls and the two are against the fence. As they fight for position, both grab the fence and receive warnings from the referee. They break and return to the center. Peggy continues to pop that jab and they land at will. Sarah has enough of it and shoots in for another double leg. Peggy defends initially, but Sarah follow through and secures the takedown. Once on the ground, they both stall out. Sarah can’t advance and Peggy seems content to just hold and wait. The ref tells them to stay busy and Sarah uses that as an impetus to move to half guard, then quickly to mount. She finally gets a chance to use her ground and pound and proceeds to drop hammerfists and elbows. Peggy tries to hold on, but Sarah keeps the damage coming. In the closing moments, Sarah transitions to armbar and with 21 seconds left she earns the tap.
No real time for celebrations as we immediately head back to Dana’s office for the quarterfinal matchups. He asks Miesha and Ronda for their thoughts and then calls in each fighter individually to as them who they would like to fight. Nothing of note happens except that Miesha and Ronda actually agree on the fights without argument to which Dana exclaims, “For the first time in history!”

With little argument, the semifinals are as follows: 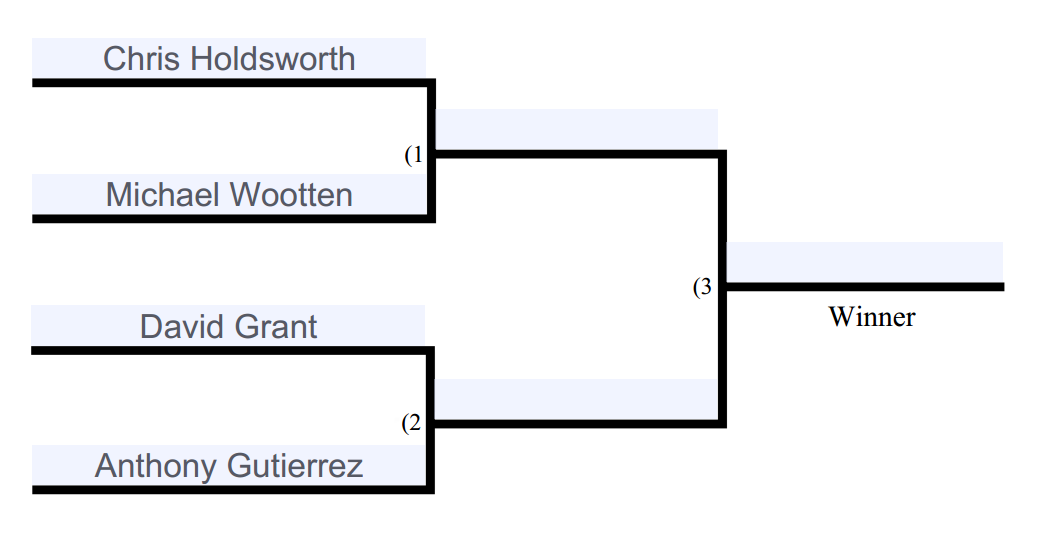 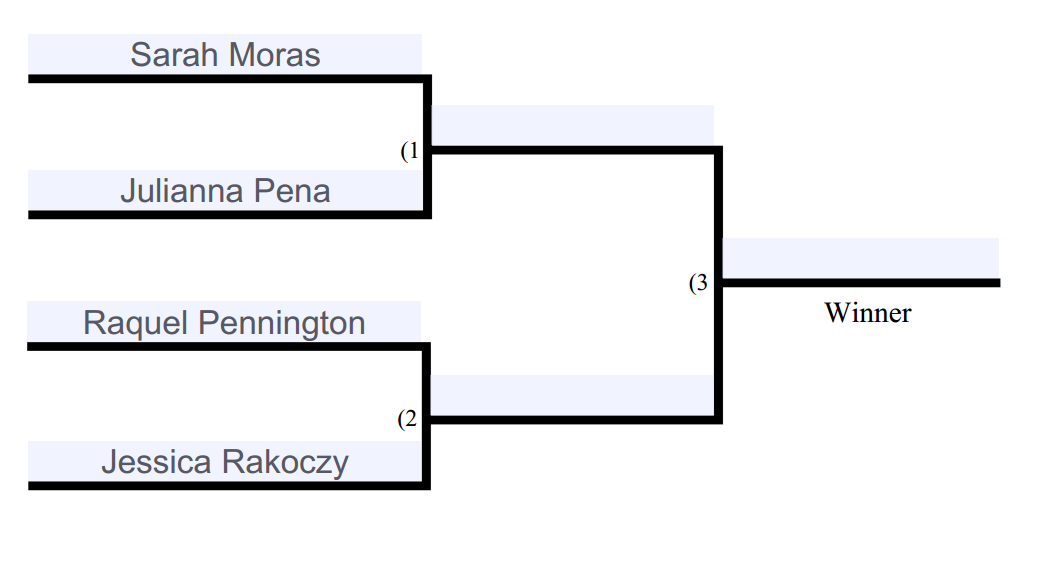 It ends with a sneak peek into next week’s episode. Who takes the first quarterfinal fight between Michael Wooten and Chris Holdsworth? Will the detente between Miesha and Ronda last? What type of leather accessories does Anthony Gutierrez prefer at the Harley Davidson boot camp? Find out this and more next week on The Ultimate Fighter!