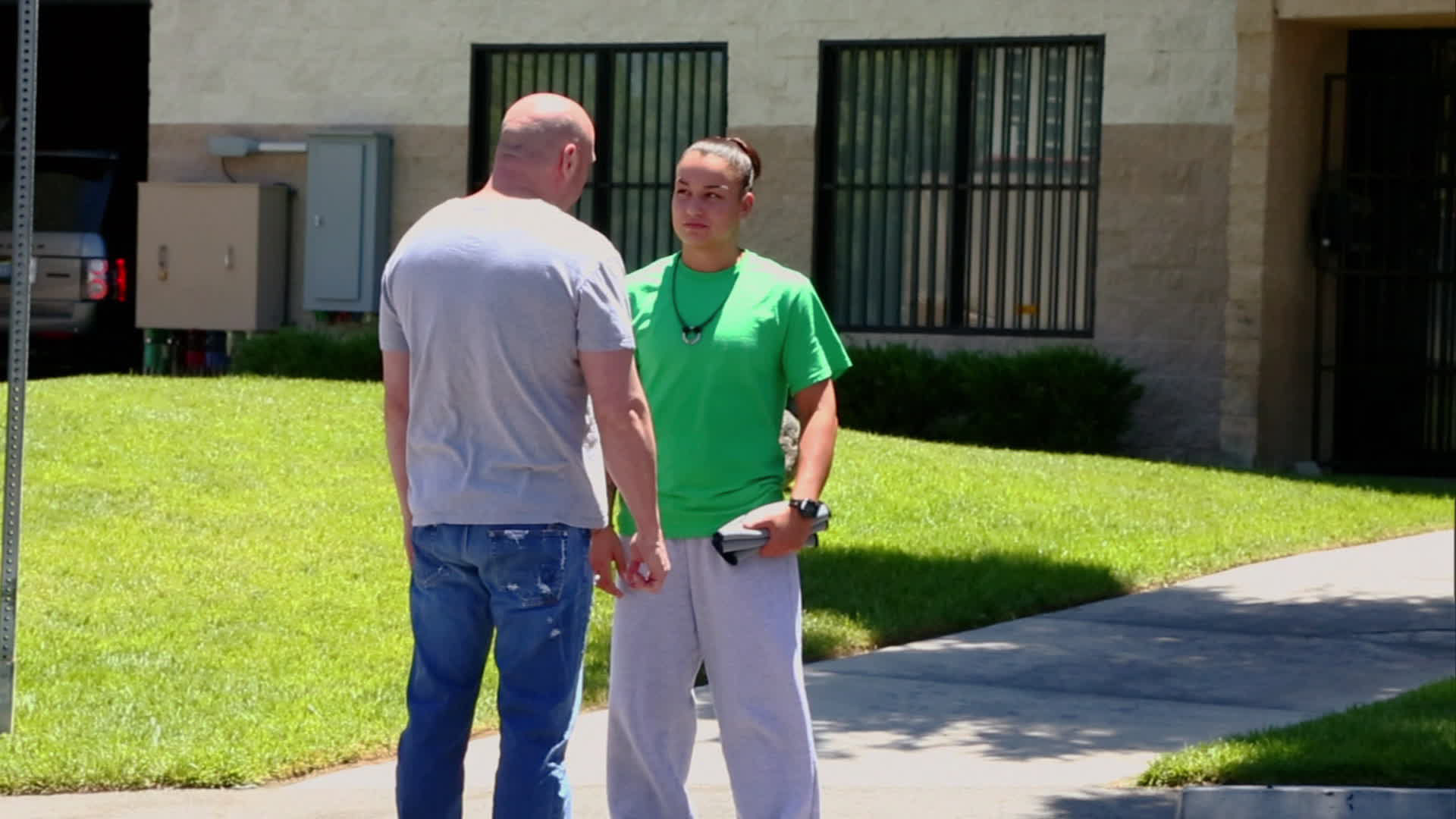 The episode opens at the training center. As the teams are heading to the vans to go back to the house, Dana White stops and talks to Raquel Pennington. Fresh off her impressive win over Jessamyn Duke last week, Dana tells Raquel that if she learns to let her hands go more, she can beat anybody on the show. They high-five each other and walk off. Julianna Pena sees this and jealousy starts to show. She says that Dana told her that he’s rooting for her to win the whole show. She hopes that Dana doesn’t have a new favorite because if he did, “[it] would just crush me.”

Back at the house, the boredom is really starting to set in. Luckily Ronda stops by to break it up with some gifts for all the dads since it’s Father’s Day. She even gives a shaving kit to Cody Bollinger who isn’t even on her team. Either through missing his family or realizing the importance of post-shave balm, Cody becomes emotional. Thinking about everything he’s putting his wife and two year old daughter through, he mutters, “It’s all gotta be worth it, right?” It’s unclear whether he’s trying to convince himself or us.

Next we hear from Team Tate’s Josh Hill, the first combatant in this week’s quarterfinal fight. His 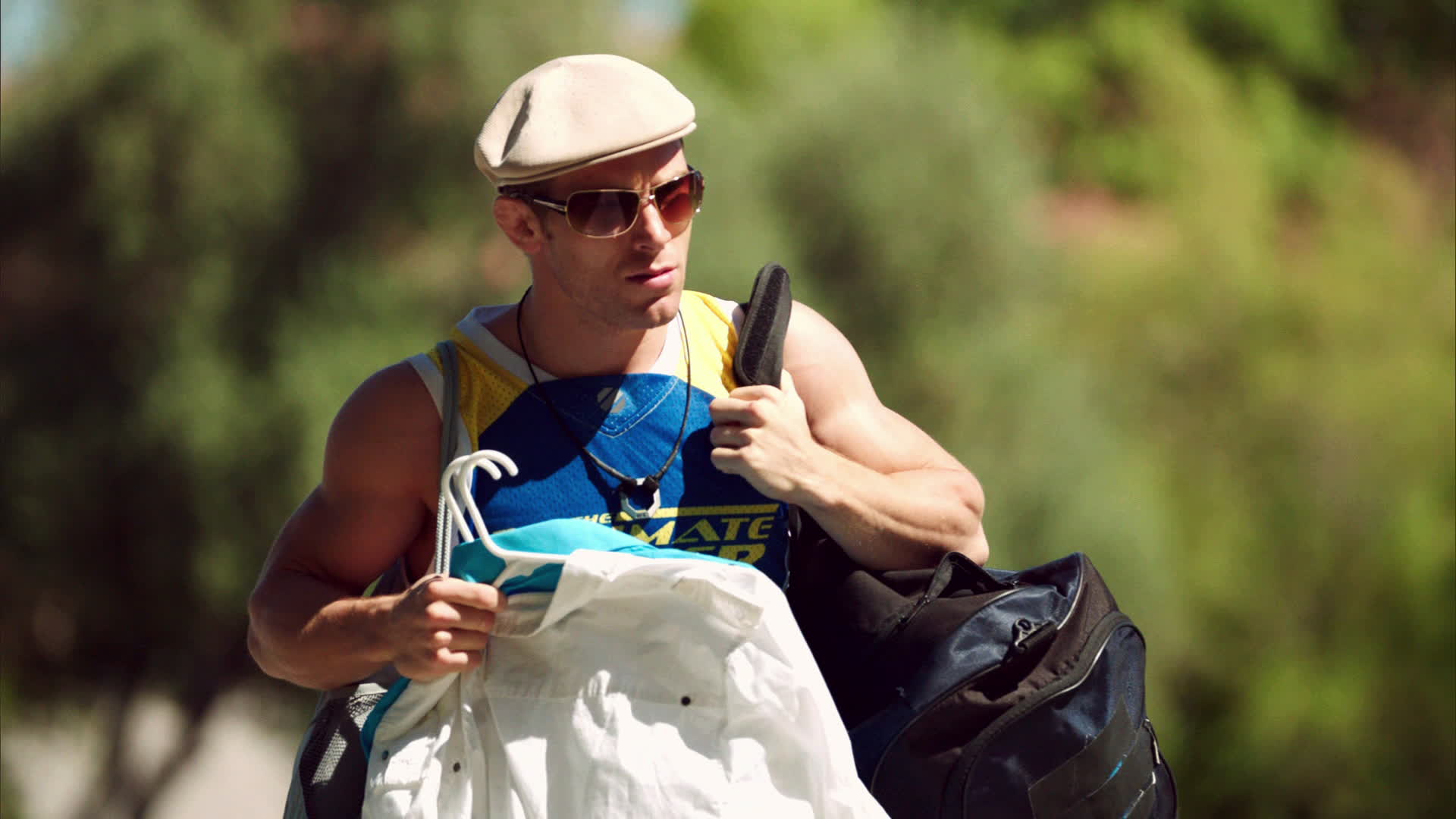 nickname “The Gentleman” comes from his great uncle, former pro wrestler Gentleman Jerry Valiant. Criticized for being a “pretty boy,” Hill admits that did some modeling, but, “I ruined it with cauliflower ears.” A former hockey player who was looking for something physical to stay competitive, Hill didn’t start MMA until he was 21 years old when he took a grappling class at his local gym.
It’s then time for the next volume in the ongoing feud between Team Tate and Team Rousey assistant coach Edmond Tarverdyan. Apparently the Team Tate coaches saw a movie with a character that that they deemed to be the perfect cross between Edmond and Ronda. They printed some pictures out, dubbed the figure, “Edmond Rousey,” and posted them up all over the gym. Always one to avoid confrontation, Dana shows up to play peacemaker and tears them down. Unfortunately he misses one in the sauna and Team Rousey’s Anthony Gutierrez finds it. In an act of maturity that we’ve come to expect from 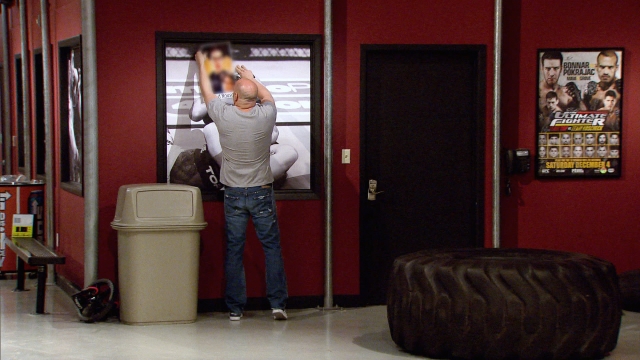 him, he runs off and shows it to Edmond. Edmond walks off and Ronda gets upset and accuses the Team Tate people of being racist.
After a break we catch a glimpse into a Team Rousey training session. Michael Wootten raves about Ronda’s coaching and grappling prowess. Ronda calls Wootten adorable and says, “I just want to squish his face.” In this case, though, it’s a good thing. Wootten readily admits that he doesn’t have an interesting origin story and leaves it at that. Let’s hope he fights better than he sells himself.

After another break, we’re back at the TUF house. Michael Wootten still has about 15 lbs. left to cut and is having a difficult time. David Grant comes in to help him, but they seem worried. Other than a towel malfunction that causes him to flash the whole crew, Wootten’s weigh in goes off without a hitch and it’s fight time.

Josh Hill begins the round with a jab, cross and immediately waist locks his opponent. Wootten 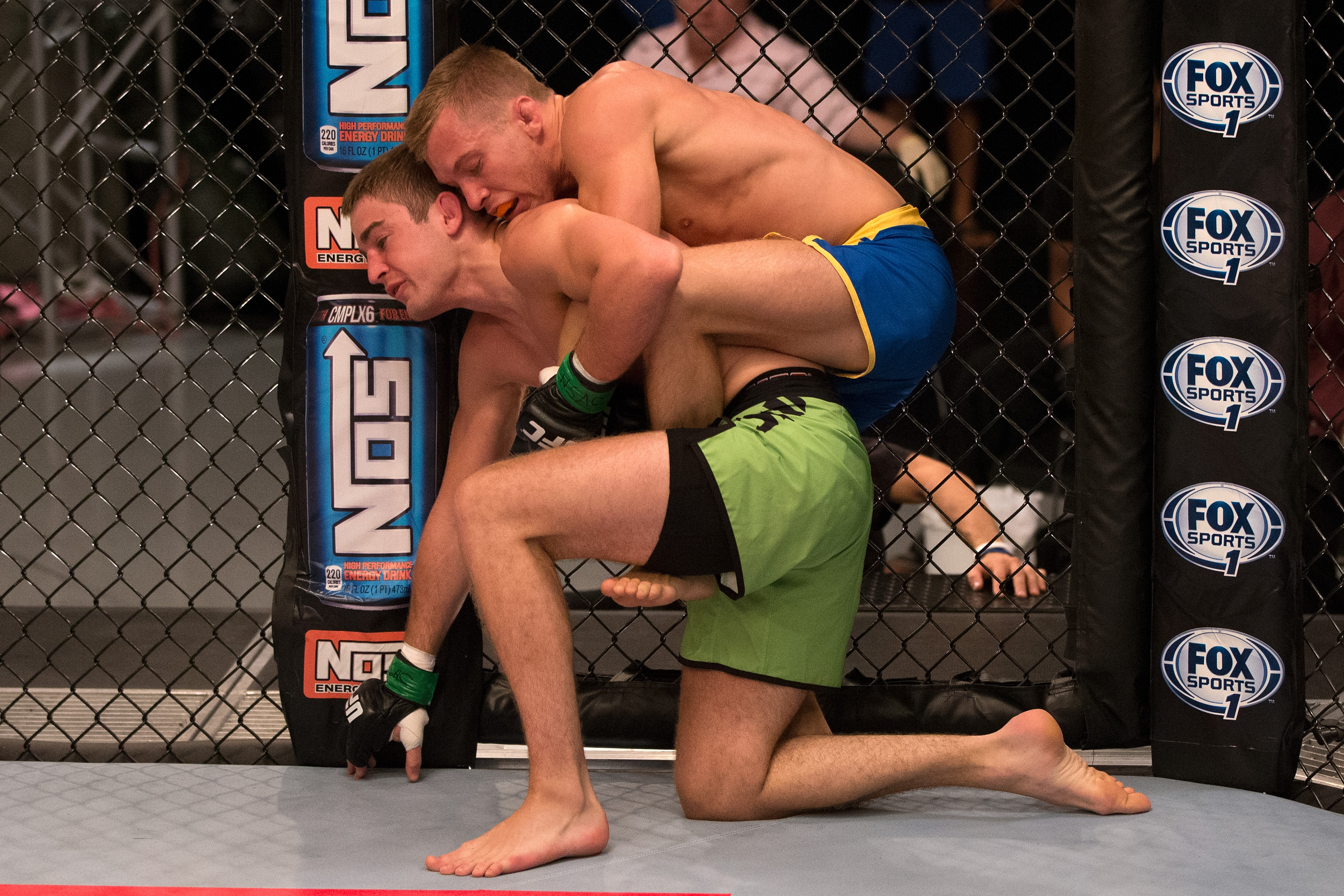 initially defends, but Hill changes levels and slams him down. Working from guard, Wootten attempts a guillotine, but quickly gives up his back. Hill jumps on this opportunity and starts to work his hooks in for a rear-naked choke. He sinks it in deep, but somehow Wootten holds on long enough to break the grip. They return their feet, but Hill isn’t giving Wootten any space, and he drives him against the fence. Wootten scores some attacks from the clinch, but he’s still unable to clear enough space. Hill drops down for a single leg, but can’t hold Wootten down. After a small break from referee Herb Dean for a loose mouthpiece, Josh picks up where he left off and charges forward. In the closing seconds, Wootten is able to reverse position and land a few more knees, but the round definitely goes to Josh Hill.
ROUND TWO

Wootten comes out blazing with a knee that rocks Hill. Visibly dazed, Hill dives for a takedown. 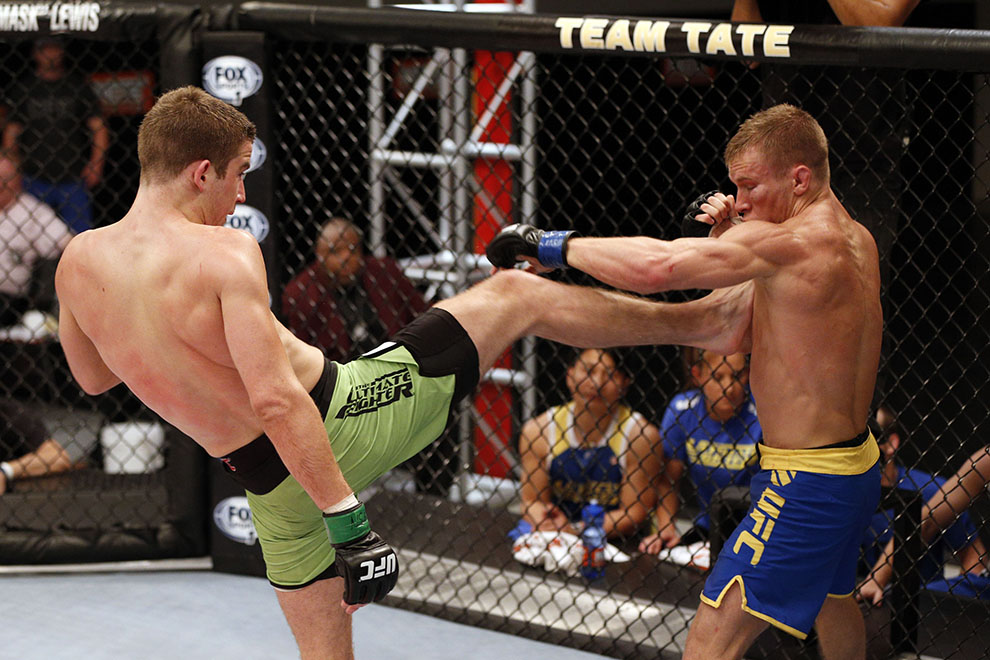 This time, though, Wootten defends and actually puts Hill on the mat. Wootten can’t advance his position, but he doesn’t need to as punches and elbows land cleanly. Hill tries to create space, but now Wootten is the one who’s blanketing his opponent. Hill scrambles to his feet, but still endures some attacks from Wootten’s clinch. They break and return to the center of the cage with half the round remaining. Wootten stalks Hill down and pushes him to the fence. Hill attempts a standing guillotine and then pulls guard to try to finish. Wootten escapes and returns to delivering the ground-and-pound. Hill turns his back and Wootten continues punching. He tries for the rear-naked choke, but doesn’t have enough pressure. This gives Josh Hill enough space to sit out and retake top position. Wootten works for a triangle, but both fighters look fatigued and the last 30 seconds are spent with weak punches being thrown on both ends. With Michael Wootten taking the second, the fight is tied and we’re heading to a sudden victory round.

Taking a page from Chael Sonnen’s book, Josh Hill throws a spinning backfist that misses wide. Wootten counters with a double leg and Hill answers with one of his own. Back against the fence, Hill searches for the single leg takedown. Wootten defends, reverses, and throws knees 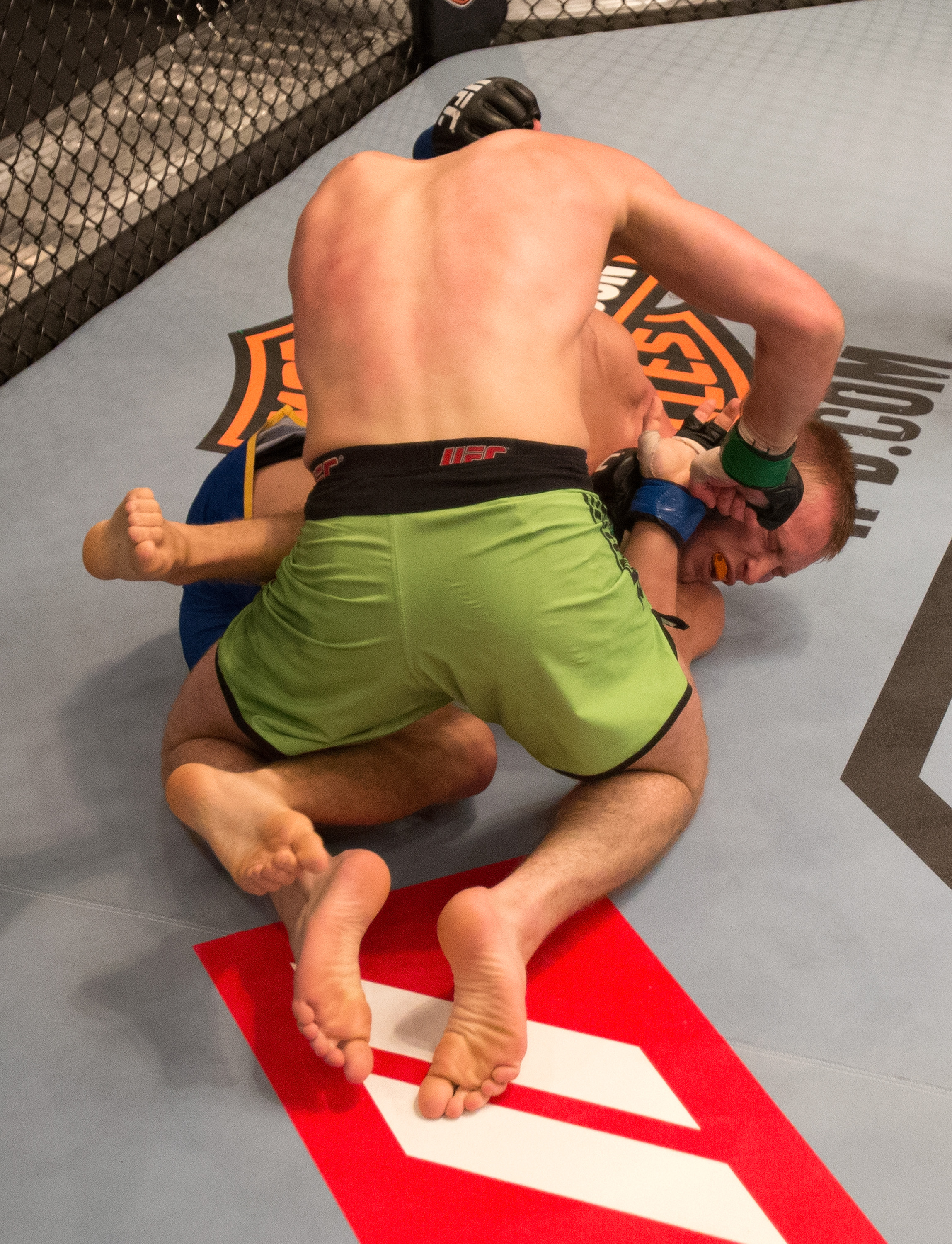 to the body. After trading positions a couple times, Wootten brings Hill back to the ground. Hill doesn’t stay there long as he returns to his feet and attempts for another single leg. They break apart with less than two minutes to go and Hill tries another ill-fated spinning backfist. This time Wootten plants Hill to the ground and drops an elbow. Hill tries to get out, but the round ends with Wootten on top bringing the punishment.
Michael Wootten wins the unanimous decision from the judges and Miesha goes to congratulate Ronda. Instead of a handshake, she earns a couple one finger salutes for her troubles because as Ronda puts it, “Miesha may be a great athlete, but she’s a terrible person.”

It’s then time for the least surprising fight announcements of the season as the last four cast mates to fight will square off. Team Rousey’s Peggy Morgan faces Sara Moras. In the final men’s first round fight, Anthony Gutierrez looks to advance against Cody Bollinger.

Will Team Rousey finish the first round strong? What type of fallout will result from the latest Team Tate prank? Does Julianna Pena go all Fatal Attraction? Find out this and more next time on The Ultimate Fighter!