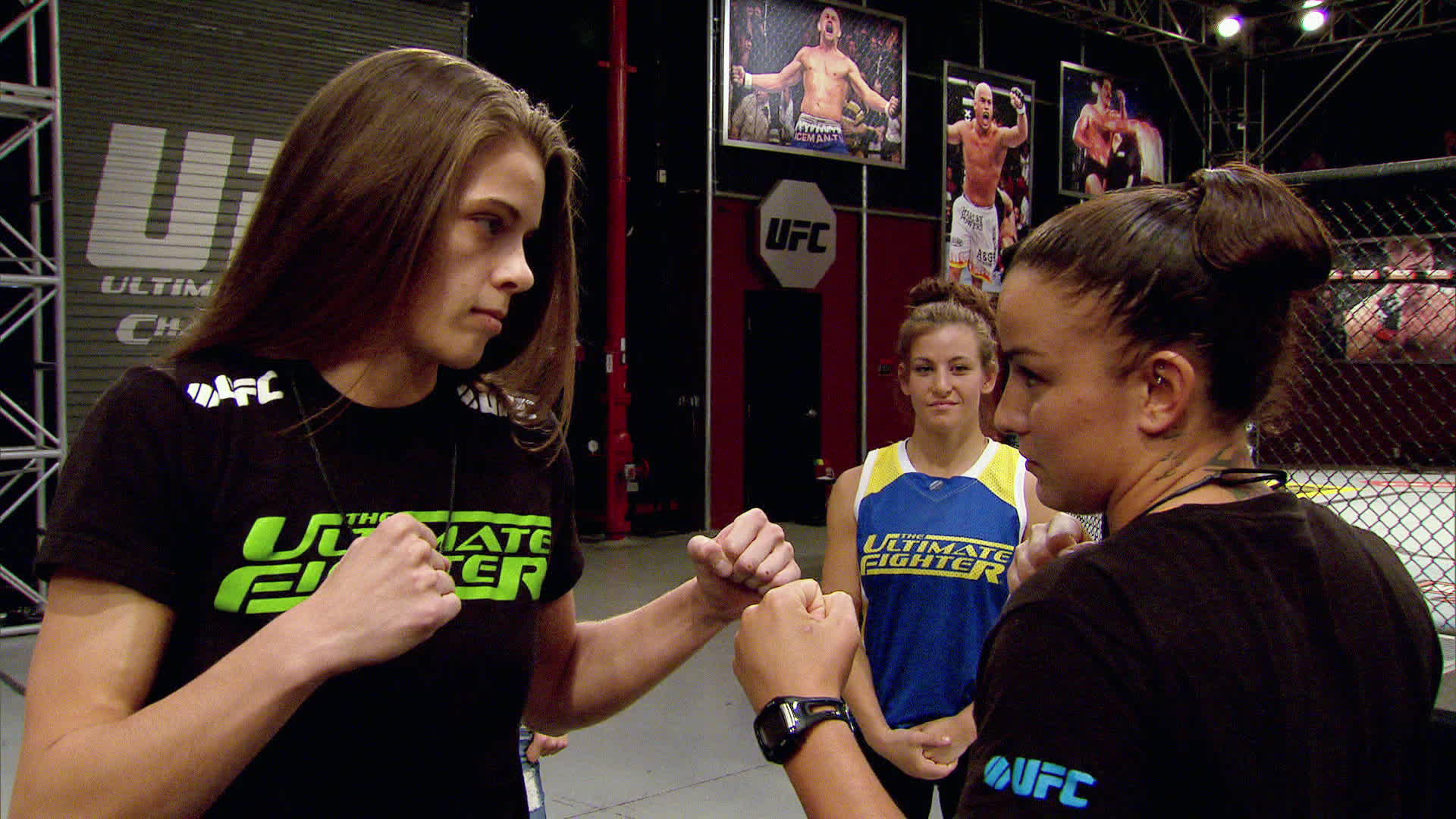 The episode opens at the TUF gym with Jessamyn Duke and Raquel Pennington discussing their impending fight. The two were originally supposed to square off when Jessamyn made her pro debut last year, but it fell through. Now, though, Jessamyn is more than happy to finally face her on the big stage. Raquel says that she was hoping to fight Jessamyn from the beginning. Team Tate breaks down the day with a “Team Rocky” chant on three. Does anyone else feel that these breakdowns have way too many syllables?

Back at the TUF house some of the ladies are bored and looking for something to do. Admitted tomboys Sarah Moras and Raquel Pennington allow Julianna Pena to make them over because as Sarah puts it, “she’s the little princess.” Both Sarah and Raquel definitely seem uncomfortable in their outfits and Julianna yells at them for “looking like linebackers.” Raquel seems to be struggling in the shoes and almost rolls her ankle. Probably not the best idea when 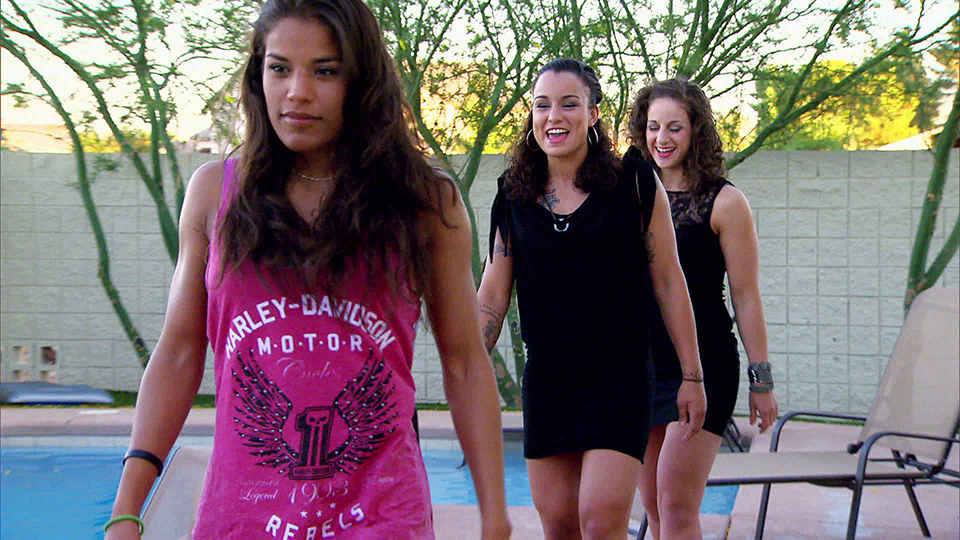 you have a fight coming up, but I can’t help but think, “How many suitcases did Julianna bring?”

We shift to Team Tate training and Raquel is hitting pads. She’s focusing on throwing elbows and clinching in accordance with the coaches’ strategy. Jessamyn has a clinch-heavy game and they’re trying to teach Raquel how to counter that attacking style. Jessamyn fancies herself a Muay Thai striker, but Miesha doesn’t appear to be worried about Duke’s offensive capabilities. She questions Jessamyn’s power and ability to utilize the reach. Miesha also calls Raquel, “the strongest woman in the house,” she worries about her pacing and thinks she’s a slow starter.

After a break it’s time for another field trip to the Green Valley Ranch Resort to watch UFC fights. The Hooters girls are there as well as the perfect food for fighters trying to maintain weight -- a chicken wing buffet. Despite the deep fried surroundings, Michael Wooten is just happy to get out of the house. It’s not a very significant statement, but I think it’s the first time he’s actually spoken so it seemed worth noting. As Wooten breaks his code of silence, Jessamyn is back at the house alone. If she were preparing for a fight anywhere else, she wouldn’t be at a pool party the 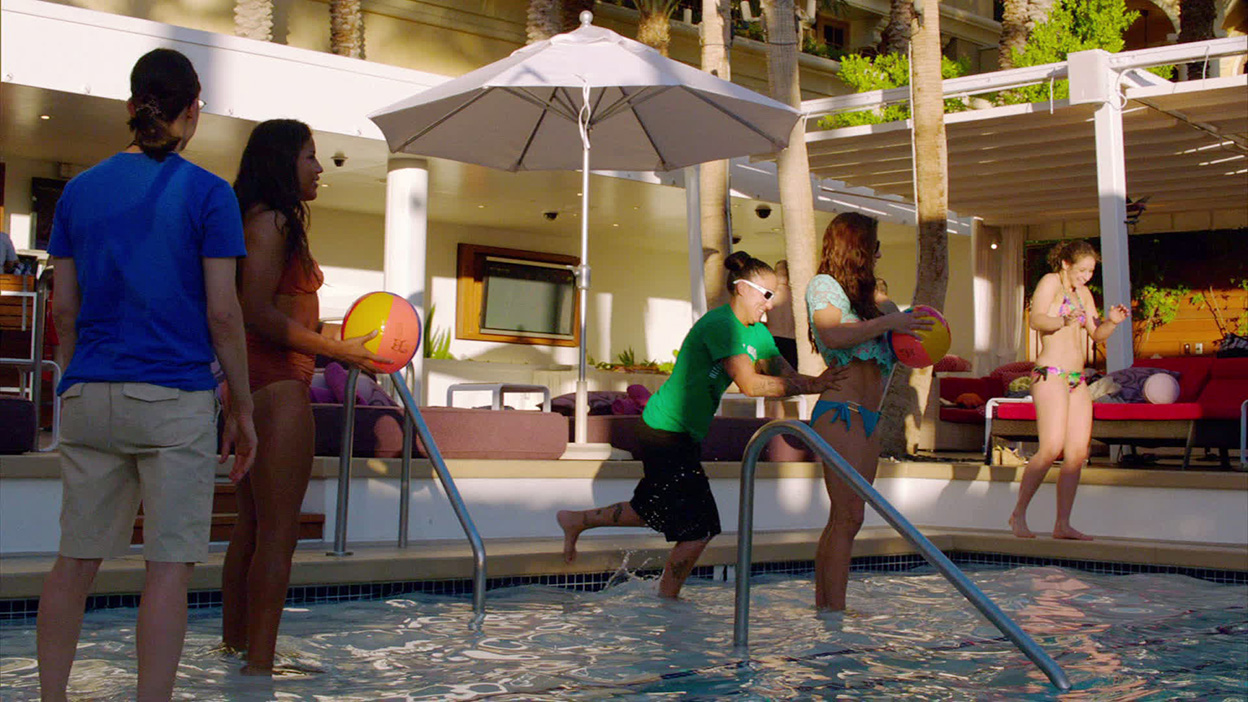 night before weigh-in, so she decided not to go. She uses that time instead to focus and tell us a little bit about herself. She discusses how people back home still can’t believe that she’s a fighter. After dabbling in modeling and acting (whatever that means) she decided to leave those industries because she didn’t like how they forced her to be phony.

While Ronda and Miesha may have avoided confrontation on this field trip, one is brewing back at the house. Just as Jessamyn heads to bed, the group comes back from the party, and Anthony Gutierrez appears to be intoxicated. In a disappointing rampage that would make Julian Lane cry, Anthony just yells and throws things at the ladies’ bedroom door. It wasn't creative, but it does annoys the girls and Raquel vows, “I’m not going to make [things] too pleasant for him.” The great revenge they plan involves waking Anthony up the next morning. Kids these days just don’t know how to rage on reality television. After some Team Rousey sparring, it’s fight time!

The round opens with the two trading jabs and low kicks. Jessamyn seems to be proving Miesha’s prediction wrong by keeping Raquel at the end of her reach. Jessamyn lands another 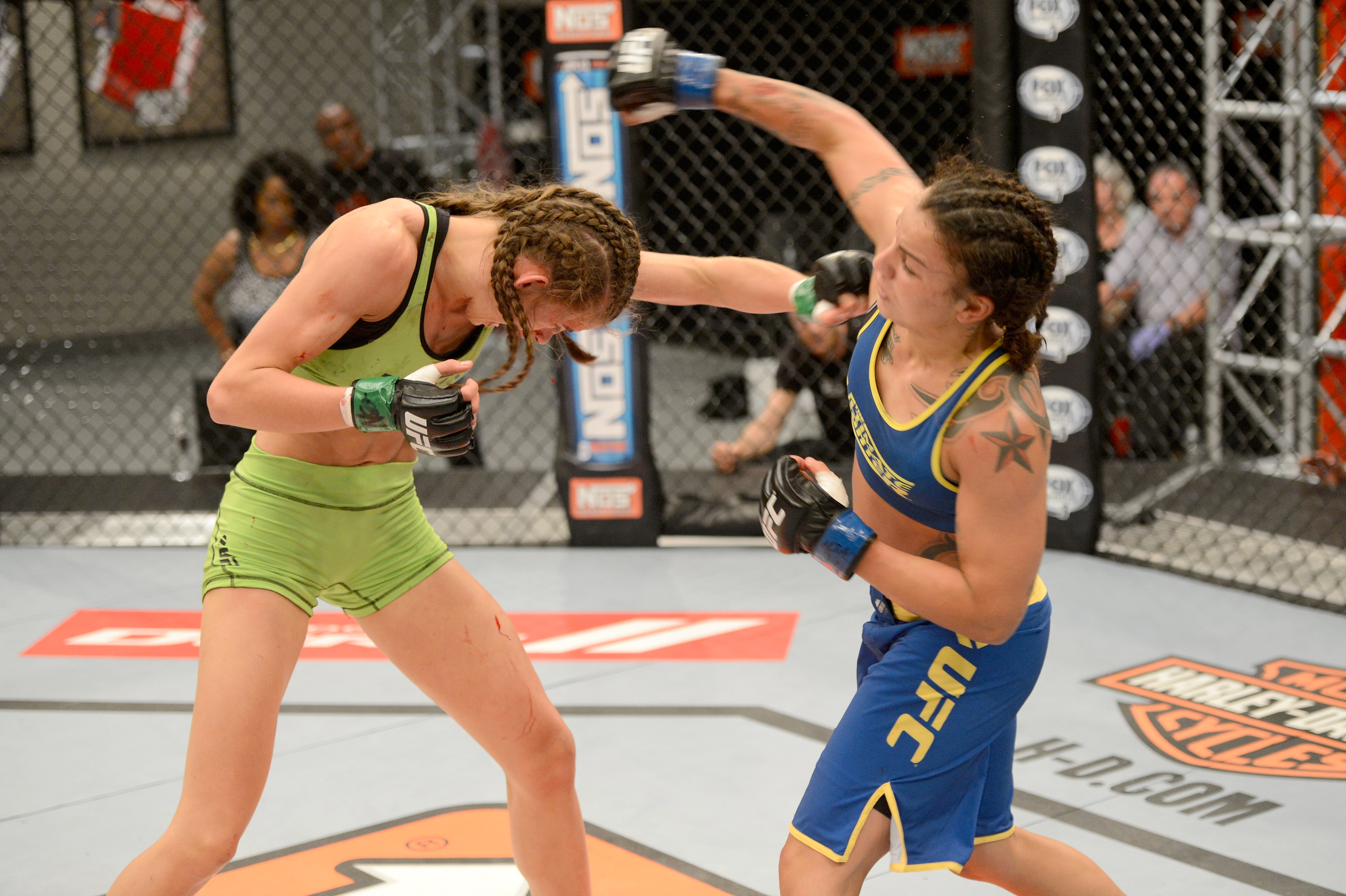 hard low kick, but this time Raquel grabs it and they head to the fence. Jessamyn controls the clinch initially and then moves for a standing guillotine. Raquel breaks the hold and punches her way out and back to the middle of the cage. From there, she finally starts to gain some momentum and lets her hands go. Jessamyn tries to answer with some kicks, but Raquel walks through them and lands more punches. They trade a few more strikes, but a counter cross from Pennington hits the mark. The most significant strike of the round, it stuns Duke and Raquel starts to tee off with less than a minute remaining. The bell saves Jessamyn, who has a bloody nose to show for her troubles.

In between rounds Miesha Tate implores Raquel to keep moving forward while Team Rousey tells Jessamyn to use her kicks more and not get into a boxing contest. Jessamyn heeds her corner’s advice and uses her long legs to prevent Pennington’s offense. Raquel eventually gets 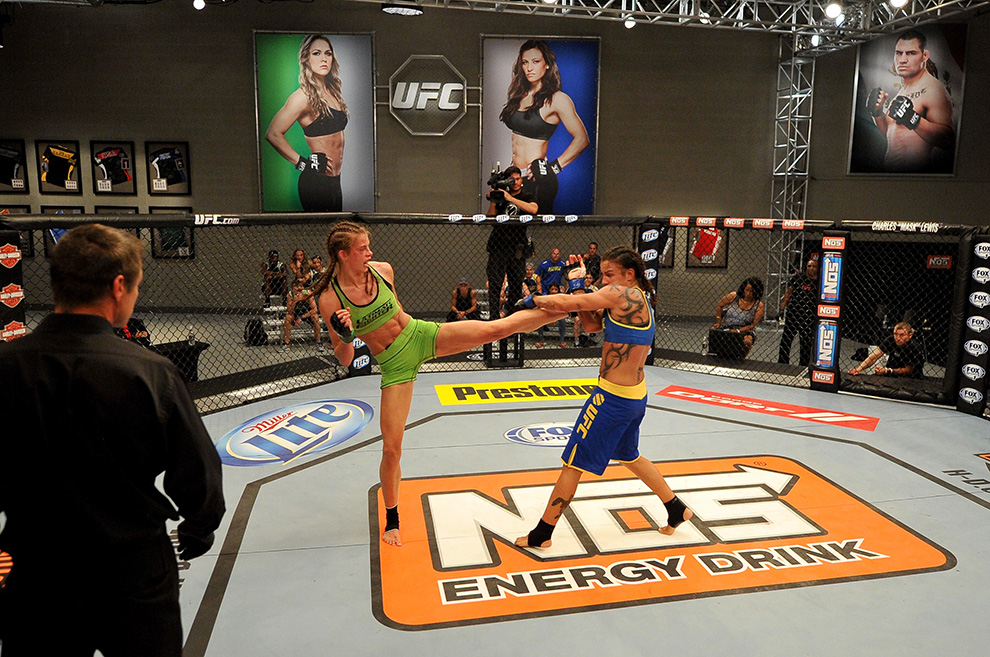 an overhand right through, but she’s still having a lot of trouble getting on the inside. Jessamyn clinches and lands a knee to the body that forces Raquel to backtrack. As she’s retreating, Jessamyn eats a hard jab, cross combo and starts breathing hard. Either to do damage or catch her breath she clinches Raquel and lands more knees. They break and Raquel charges forward swinging leather. She pushes Jessamyn against the fence, and Duke’s face keeps getting bloodier. Jessamyn still has some fight in her and lands a knee to the face. With the 10 second warning, Jessamyn clinches again and delivers the damage as the round ends.

As the third round opens, Jessamyn definitely looks to be the more battered and tired of the two while Raquel seems to be picking up steam. The round starts off a bit tentative with the two exchanging jabs. Jessamyn tries to keep kicking, but fatigue seems to be limiting her numbers. 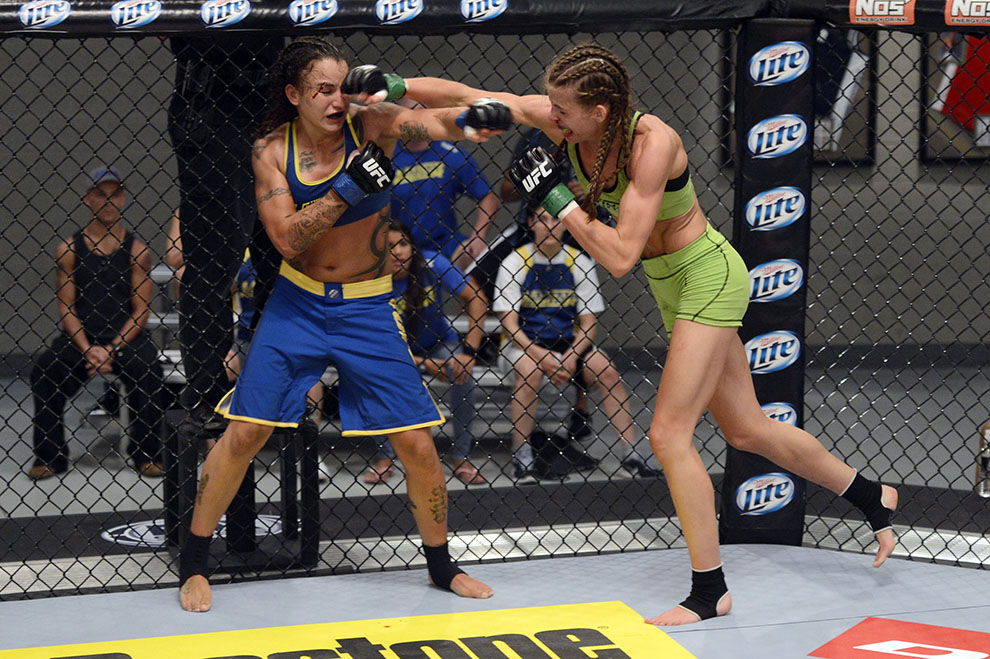 At the 2:45 mark, a right hand clips her. She tries to answer back with a head kick, but Raquel charges through and keeps punching. She connects with another jab, cross and Duke answers with some straight shots of her own. They keep going back and forth with neither one quitting, and you can feel the emotion in the gym. With 25 seconds left, Duke jump knees and it opens a cut over Raquel’s right eye. The round ends with the two leaving it all on the line.

As we head to the judges’ scorecards, all three gave the third and final round to Raquel Pennington and Team Tate takes control back. Miesha tries to shake Ronda’s hand and all she gets is a middle finger for her troubles.

It’s the fight announcement and the now confirmed non-mute Michael Wooten makes a second appearance. He will be facing accomplished grappler Josh Hill.

The episode wraps up with a sneak preview for next week. What’s Father’s Day like in the TUF house? Why does Dana White have to play peacemaker again? Now that we know he’s not a mute, will Michael Wooten ascend to Bobby Southworth levels of obnoxiousness? Find out this and more next week on The Ultimate Fighter!