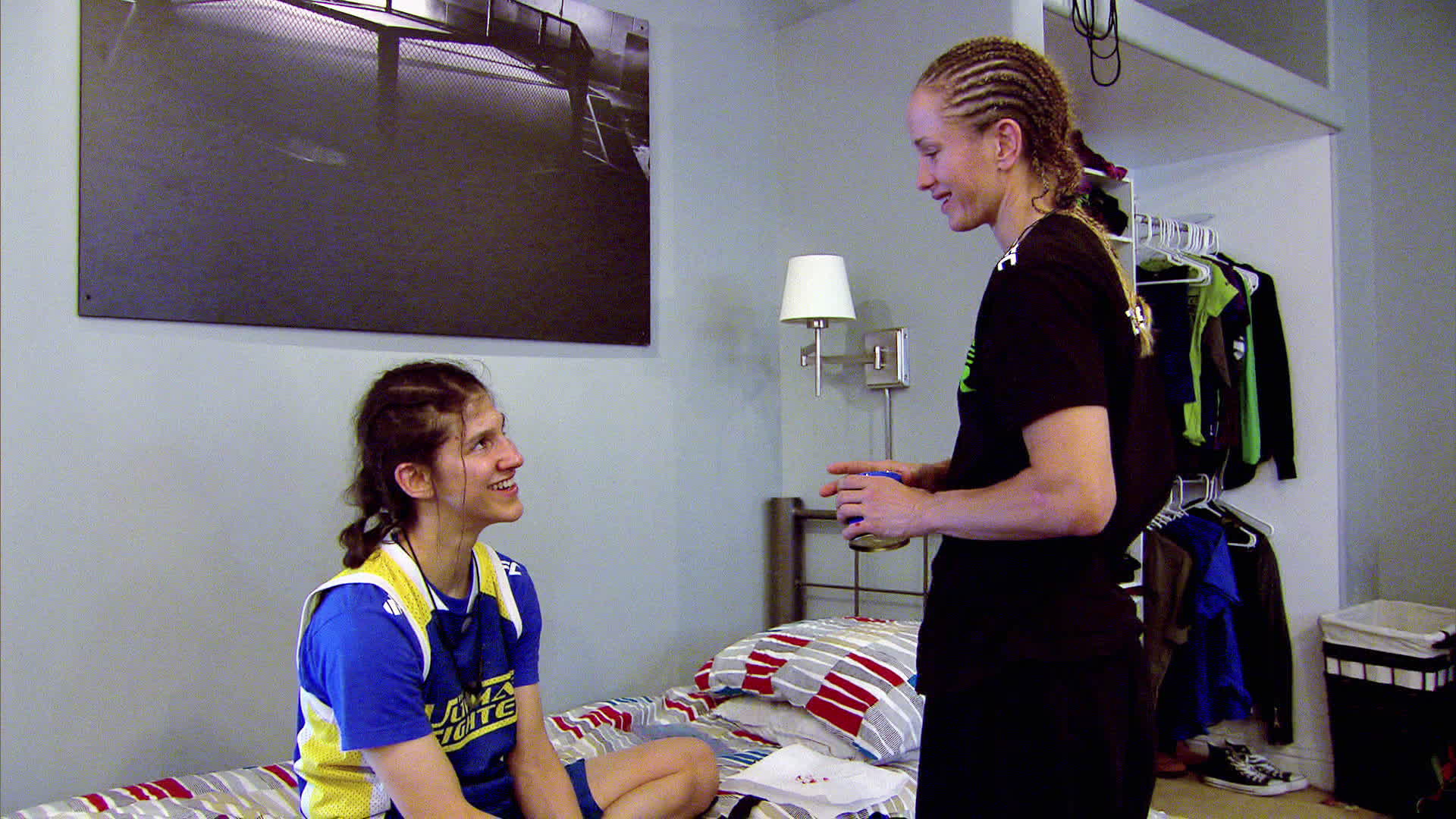 which she busted up in their fight last week. Jessica says a huge weight has been lifted off her shoulders by winning the preliminary fight, and feels that the victory legitimized her decision to leave her son and be on the show. Roxanne tells Jessica that she’s happy for her, but we later see her lying on the ground outside crying. She tried to hide from the cameras by taking her microphone off, but they caught up to her. The sadness is short-lived, however, and eventually she starts laughing and lives up to her moniker as “The Happy Warrior.”
Things then transition to this week’s fight between Louis Fisette and David Grant. The two happen to be roommates and we see them in their room chatting. David assures us that the fight will have no effect on their friendship. “We’ll be mates afterwards,” he insists. As David talks about friendship, Louis is primarily concerned about making his second chance count. Even though he lost to Chris Holdsworth to get into the house, an injury to Tim Gorman allowed him the opportunity to come back and compete and he doesn’t want to squander it.

We cut to another part of the house where some of the women are talking. Raquel Pennington talks about life as a gay athlete and the difficulties it entails. At first even her own family didn’t accept her, with the relationship with her mother becoming especially strained. As the years have passed, though, things have slowly returned to normal. Her motivation for telling the story is to let people know that it shouldn’t matter who you love. It’s like that Macklemore song, just not as catchy.

We then cut to David Grant talking about his own family. He’s starting to get homesick and misses his two sons and their mother. He credits his children with making him not only a better 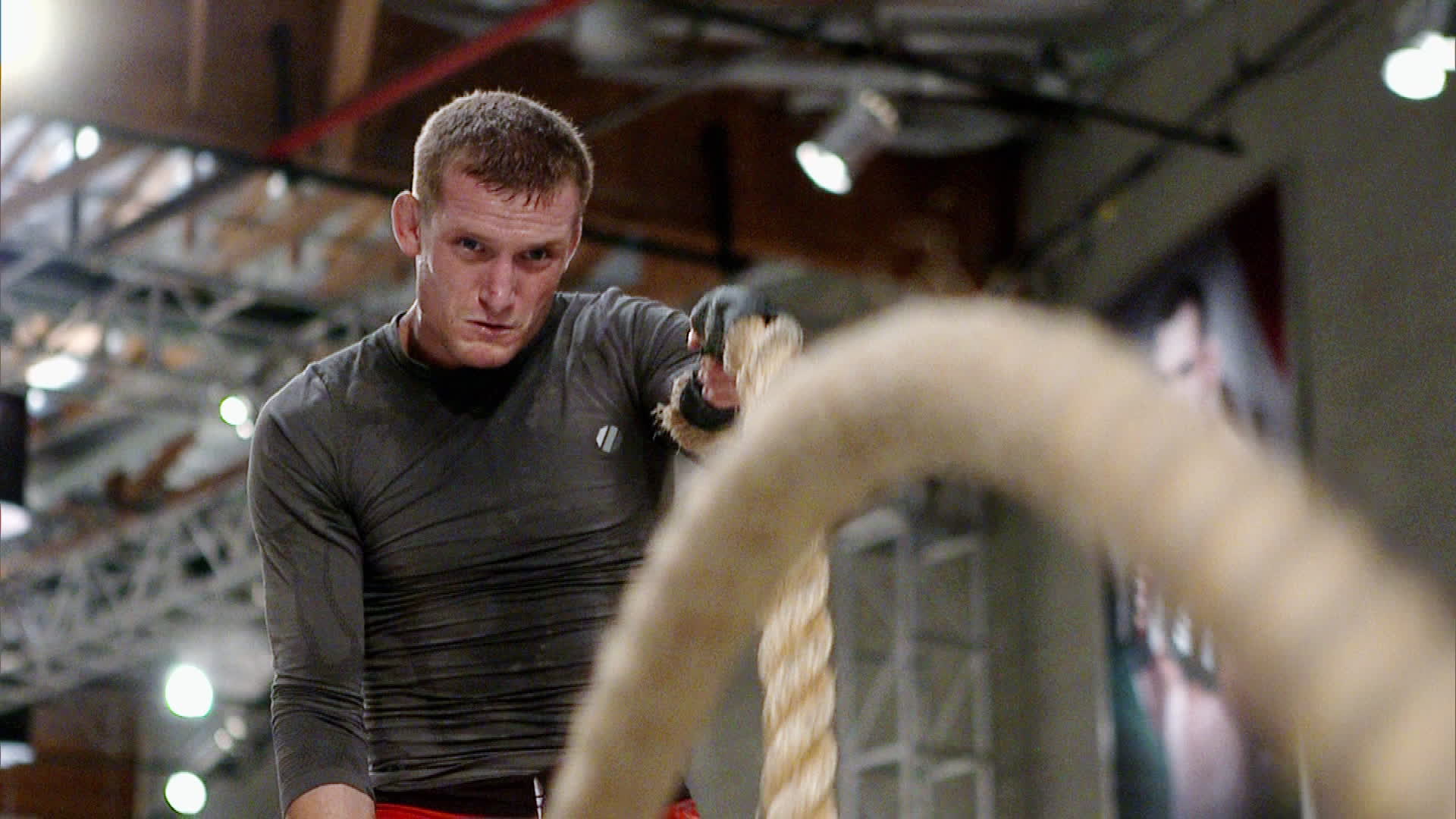 fighter, but a better man. Once they came around, it forced him to become more serious about his career and quit partying. He says that if he wins the tournament the first thing he’ll do is spend some of that money so he can marry the boys’ mother. She’s been an instrumental part of his success by working full time to provide for the kids while he chases his dream.
We then hear Ronda’s breakdown for the fight. She’s amazed David’s ability to beat opponents in a variety of ways. She’s admires the way that he uses his striking to wear opponents down, and once they’re hurt, he exploits openings on the ground to submit them. Her one cause for concern seems to be Grant’s tendency to “lose himself in his fights.” Basically, he gets caught up in the moment and makes mistakes.

After the break, we’re back at the TUF house and the cast mates are playing, “Truth or Dare.” The more this show goes on, it just seems like a slightly less violent version of high school, right? Sarah Moras must reveal who she thinks is the hottest guy in the house. Her answer is Anthony Gutierrez to which Julianna Peña responds, “Gross!” She doesn’t think he’s physically ugly, just that she doesn’t care for his personality. Sarah then asks Josh Hill to try to use a cheesy pickup line on Roxanne. In the worst delivery since Lindsay Lohan’s portrayal of Elizabeth Taylor, Josh comes up and delivers the classic, “Nice shoes. Wanna [expletive]?” line. I feel like Roxanne would respond much better to something made out of construction paper.

When Anthony Gutierrez’s turn comes up, he’s asked for his opinion of who is the weakest link in the house. He responds that it is Louis Fisette (right in front of him) and like a true man of conviction runs away. On the confessional cam, Anthony says, “If you’re going to play truth or dare, someone’s going to get offended.” That’s right, much like a UFC fight, truth or dare is a dangerous game that can often result in people being hurt.

We then learn more about Louis Fisette besides the fact that he still lives in his childhood bedroom. Growing up in Canada, his first exposure to MMA came when he was 18 years old. A friend of his brought him to a local gym and he instantly became hooked. After he had his first fight, he’s been chasing that feeling ever since. He calls it a “sick addiction.” Fresh off the Anthony’s comments, Louis realizes more than ever that he’s the underdog. He even goes so far as to say that 90% of the people of the house think that he’s going to lose.
As for the strategy to pull the upset, Louis believes his key to victory will be in the standup. If he’s aggressive and keeps coming forward he should be able to take Grant out. Miesha agrees with this assessment thinks David’s biggest weakness is when he’s forced to go backwards. As for the questions surrounding Fisette’s first fight, he may have lost to Chris Holdsworth, but Grant doesn’t have the same level of grappling.

After the break, we get a glimpse into the life of an MMA fighter. Think they’re all meticulous about their diets and judge your Krispy Kreme habit? Not these fighters; everyone is stuffing their face. People point the finger at Anthony Gutierrez as the biggest overeater in the group (I guess he’s a pig in multiple ways), but he says that he’s fine. The award to heaviest guy in the house goes to Cody Bollinger who clocked in at 157.5 lbs. He drops “I could eat one of those cinnamon buns.” Remember Gabe Ruediger from TUF 5?

Time for Team Rousey practice and she brings her mom, Dr. Ann Maria Rousey DeMars to come watch practice. Ronda tells us, “People will understand me a lot more once they meet my mom,” 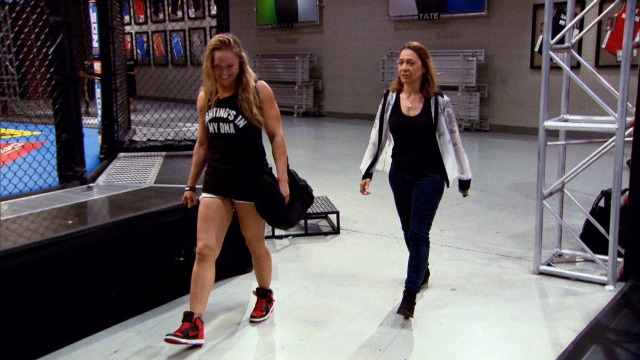 and that fact comes apparent quickly. Dr. DeMars wastes no time telling Team Rousey to pick it up. Apparently the bumps and bruises that go along with training have caused some of them to take it easy and sit out practice. She hammers home that it doesn’t matter what’s hurt or how you feel, you should be able to do something. As her mom takes charge, Ronda is beaming ear to ear and you see how much she respects her. Dr. DeMars is certainly intense and Jessamyn Duke remarks, “Ronda makes a lot more sense [now].”
After the break Team Tate sneaks into the opposing team’s locker room. In there they leave a coupon for Team Rousey assistant coach Edmond for a free eye brow waxing. It’s attached to a figurine of Sesame Street’s The Count because they look similar. Shayna Baszler finds it first and she and the rest of her teammates don’t really appreciate the joke. Ronda is the least amused of the bunch and descries this “passive aggressive bull [expletive].” They hide the whole thing from Edmond, weigh-in goes off without a hitch and it’s fight time.

The round opens with David Grant coming out strong. A five punch combination pushes Fisette 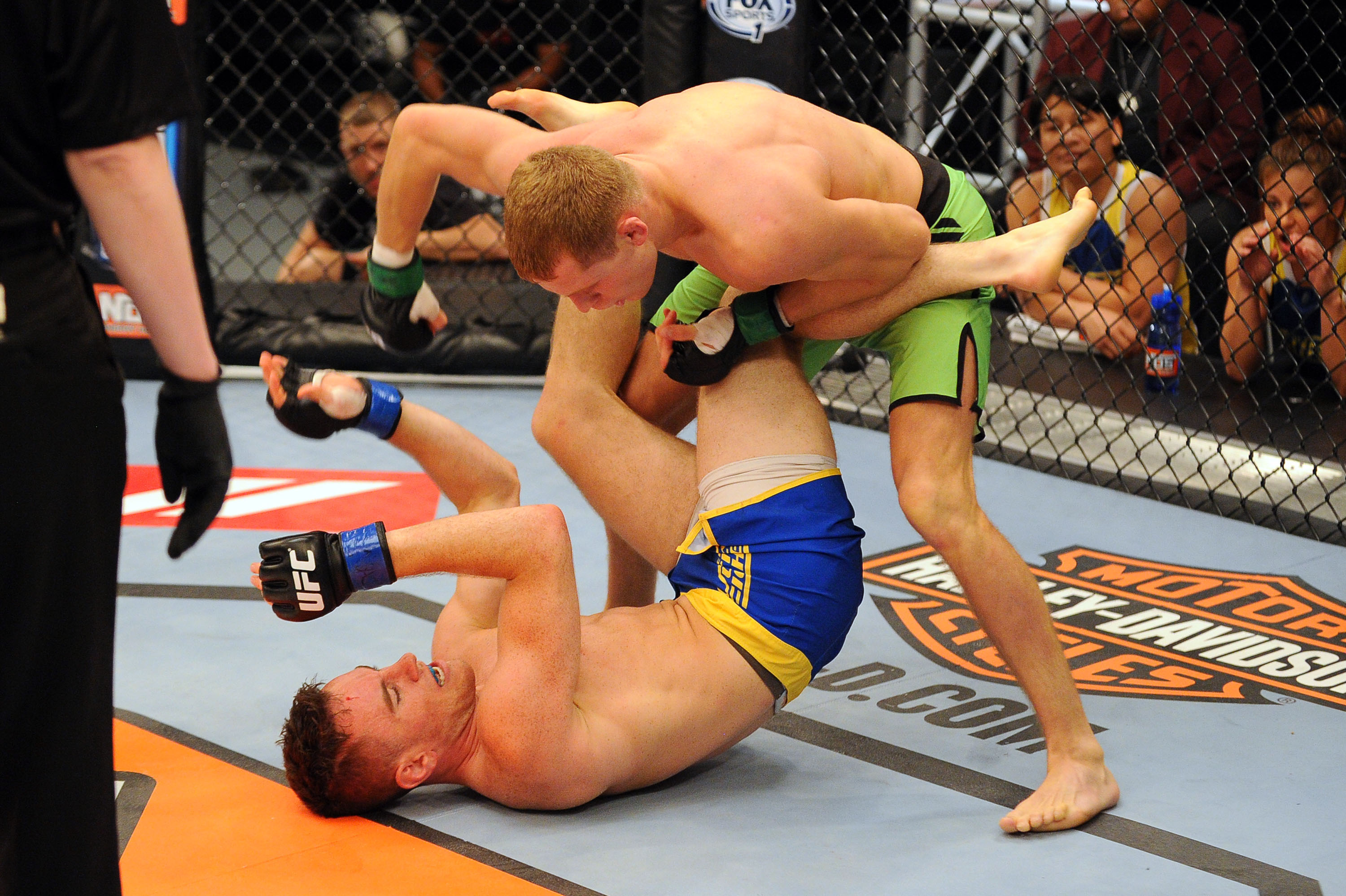 to the fence where he shells up. David unloads a knee and the two clinch up. Louis reverses position, but soon finds himself back against the fence. One of Fisette’s knees gets grabbed and he tries to counter with a jumping knee. Grant doesn’t give him time to connect, and slams him to the ground. Blood starts to show on Louis’s forehead. From the ground, David stacks Louis up and brings a hard left hand down. He keeps the ground and pound coming and Louis tries to counter with a kneebar. David defends and uses the opening to transition to side mount. From there he attempts an armbar, but Louis defends and takes top position for himself. There’s a scramble and David winds up back in top position where he starts bringing vicious elbows. He keeps dropping them and Louis is in a bad place. Fisette shells up and Kim Winslow looks ready to stop it when the round ends. As Fisette gets up, there’s a noticeable gash over his right eye.
ROUND TWO

Looking to gain some momentum, Fisette shoots in right away. He doesn’t get the takedown, but he’s able to run Grant against the cage. Grant’s power is just too much for him, and he easily 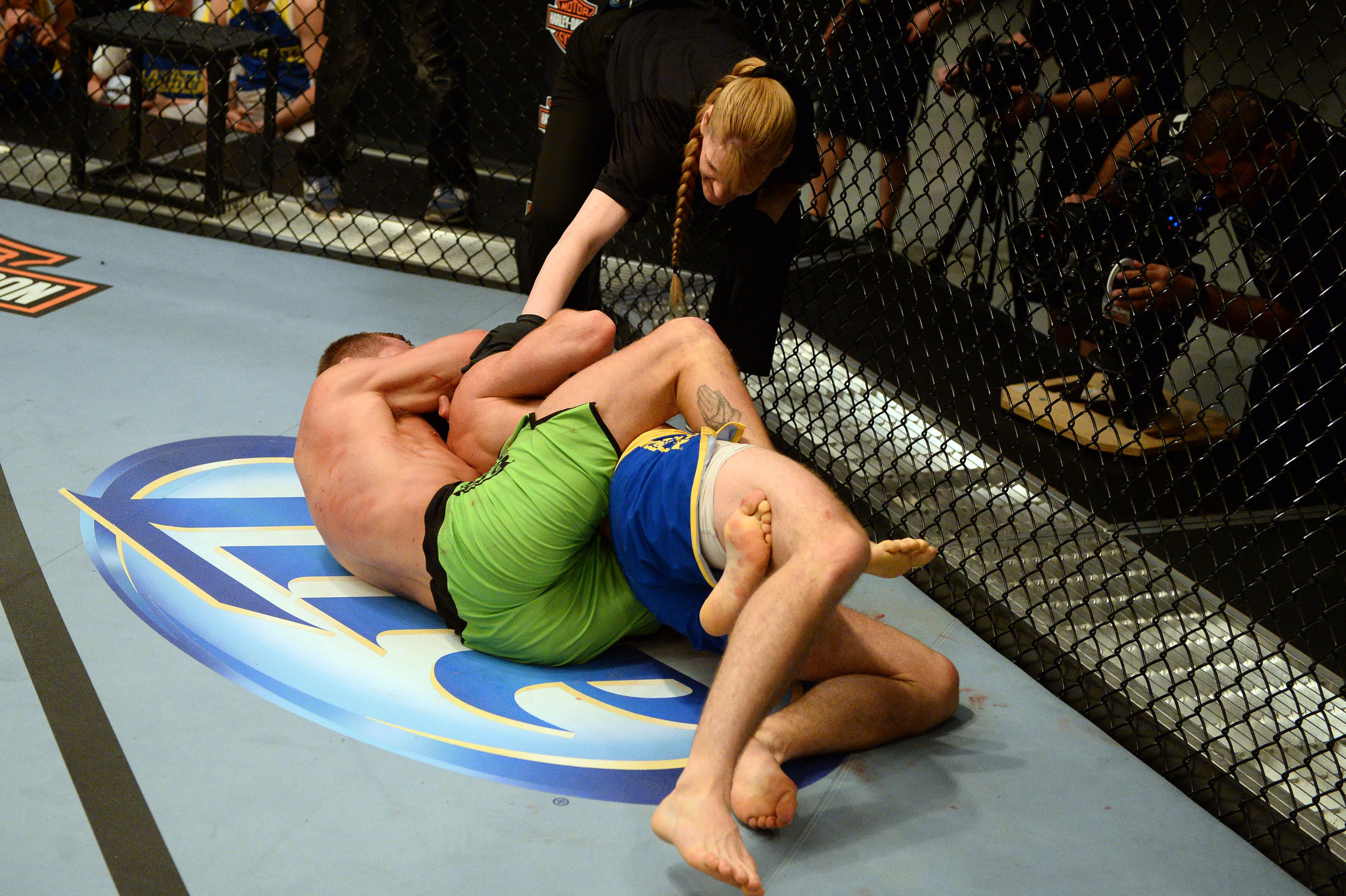 picks Louis up and slams him down again. He immediately moves to side mount and shortly takes the full mount. Louis gives up his back and David Grant starts pounding away. He moves for the rear-naked choke, flattens Louis out and secures the tapout. In the post-fight interviews Fisette has an honest assessment of how it went. “It was a one-sided beating and he was laying the hammer.”
It’s announcement time and Team Rousey will pit Jessamyn Duke against Raquel Pennington. Ronda (naturally) thinks it’s the perfect matchup for Jessamyn as her range and Muay Thai will be able to negate Raquel’s top control. Miesha is just as enthusiastic for the match, and said that it’s exactly the one she would have chosen because Duke doesn’t use her height effectively.

The episode wraps up with a sneak peek into next week’s episode. Do the coaches get into another confrontation outside the house? Can Team Tate’s Raquel Pennington take back control? Will Julianna Pena drop out of the show after realizing her true calling as a beautician? Find out this and more next week on The Ultimate Fighter!