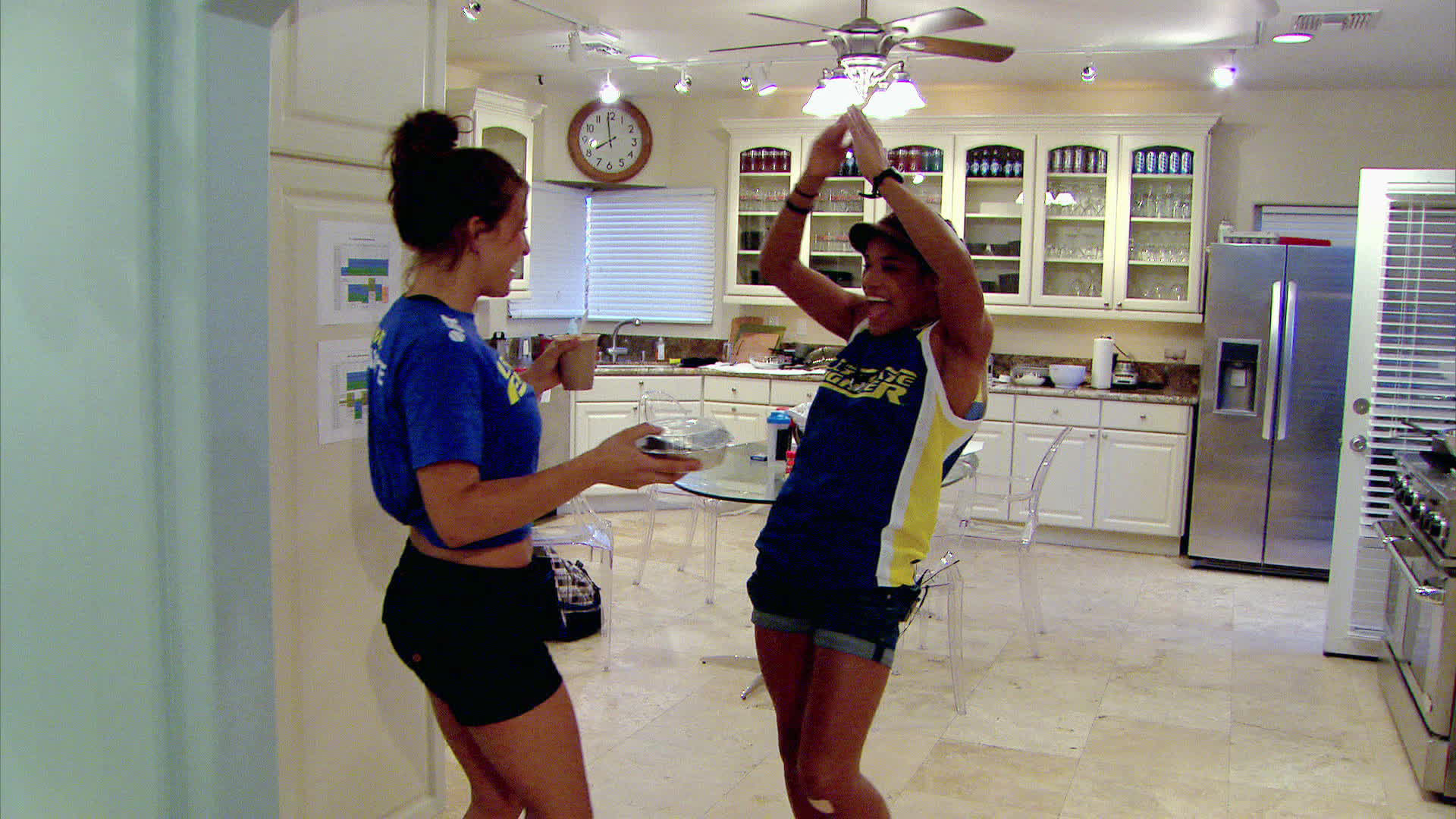 The episode opens up at the TUF house as Miesha Tate and her assistant coaches stop by to congratulate Julianna Pena on her upset victory over Shayna Baszler. Upon receiving her congratulatory milkshake, Julianna acts more excited than when she actually won the fight. To ensure that Shayna doesn’t feel left out again, Miesha brings some chocolate cake for the Queen of Spades to enjoy. Way cooler than an olive branch, Miesha uses this opportunity to discuss the “controversy” from last week. She tries to explain that she wasn’t “smiling at her pain,” as Ronda described it. Rather, she was just happy for her friend to win. Shayna doesn’t seem too affected by it.

Julianna may have a delicious milkshake, but she doesn’t appear to have many friends inside the house. We don’t hear everyone’s opinion, but Anthony Gutierrez speaks up and tells us that he likes everyone in the house; Julianna is the only one that bugs him. Ever chivalrous, he adds, “But she’s pretty good looking, so she can get away with it for longer.” Much of the dislike stems from the fact that people just find her annoying. Exhibit A: her attempt at a British accent. If you thought Dick Van Dyke’s Cockney accent in Mary Poppins was bad, this is on a whole new level. Cody Bollinger calls it “unbearable.” Julianna brushes it off and calls all the other people in the house immature. If there’s one person we can trust, I think it’s the one jumping up and down over melted dairy products and speaking in a fake accent.

We cut to a Team Rousey training session and Ronda is still stinging from the defeat. She blames part of the loss on Shayna getting too emotional. The champ cautions them to embrace the 4 C’s. Be a cold, calculating, confident [expletive] (I’ll let you guess the fourth one). We then hear from the first combatant in this week’s elimination bout -- Chris Beal. He reminds us about his battle with sarcoma cancer and that, “after that, everything is easy.” His right hand still has some swelling from his fight to get into the house, but Ronda is 100% confident that it won’t hold 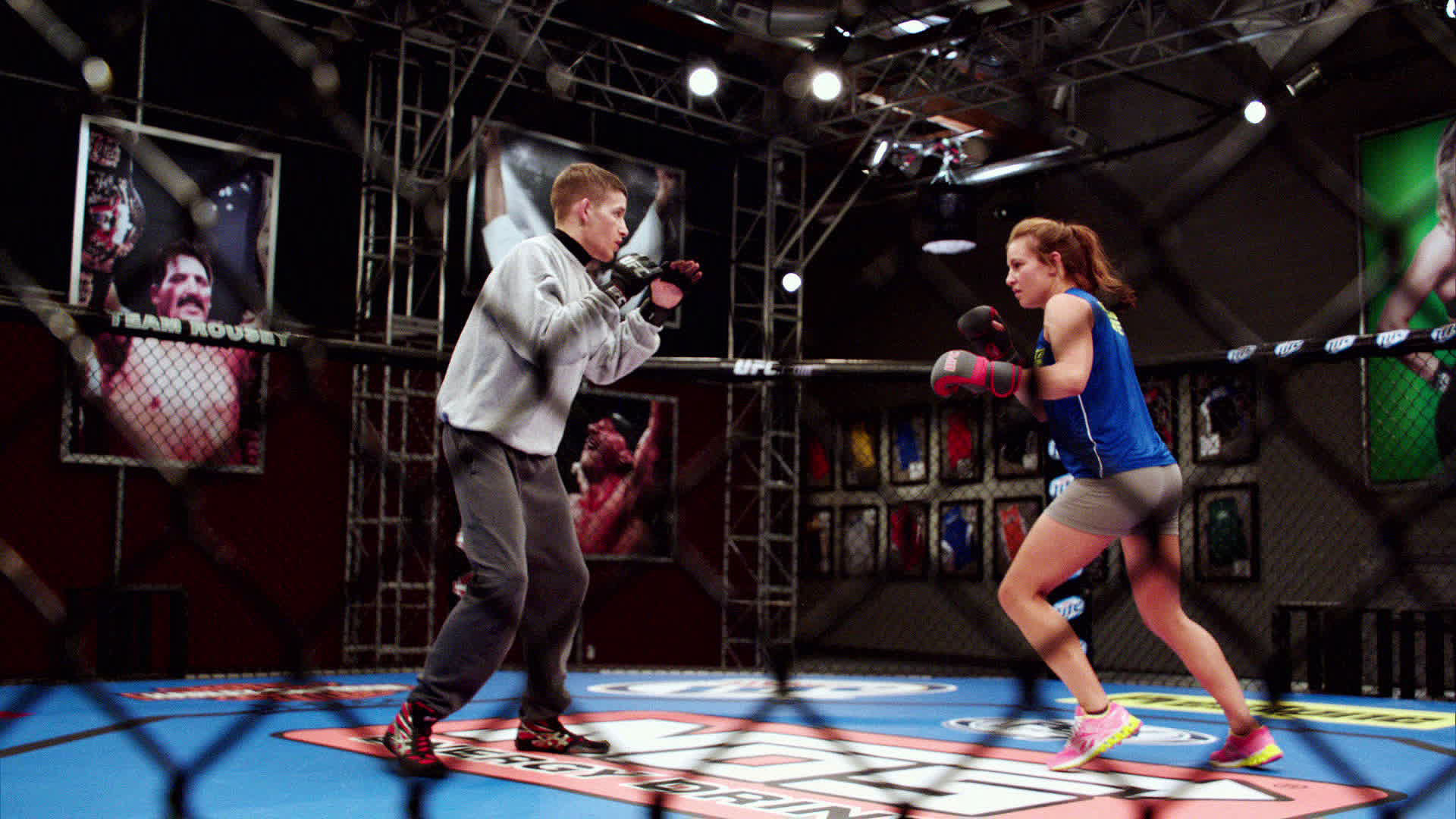 him back. Beal has the same confidence and knows the key to victory is to keep it standing and not let his opponent Chris Holdsworth do, “his jiu jitsu stuff.”
After the break we see the Team Tate training session and there’s more drama afoot. Cody Bollinger heard that someone revealed all their planned match-ups to the other team. Due to the fact that Julianna already fought and appears to be close with the members of Team Rousey, he believes it was her and calls her out in the transportation van. She offers up a weak denial, plays with her hair and then tries to pin Roxanne Modafferi as the prime suspect since Roxy shares a room with some Team Rousey people.

After that uncomfortableness, we learn more about Chris Holdsworth. He traces his MMA roots to hanging out with his dad and watching martial arts movies. One night Papa Holdsworth brought back a copy of UFC 1. Chris was immediately hooked and enrolled at a gym the next day. It harkens back to a simpler day when children were motivated by bare knuckle fights and parents cultivated those desires. He works on his striking defense and Miesha tells him to watch out for Beal’s left hook. Holdsworth also tells us that he doesn’t want people to think he’s just a grappler and he’s looking forward to showcasing his striking against Chris Beal. Looks like we only need to wait another episode to find the next Andy Wang!

From there we go back to the house and see the battle for first hookup. The runaway favorites 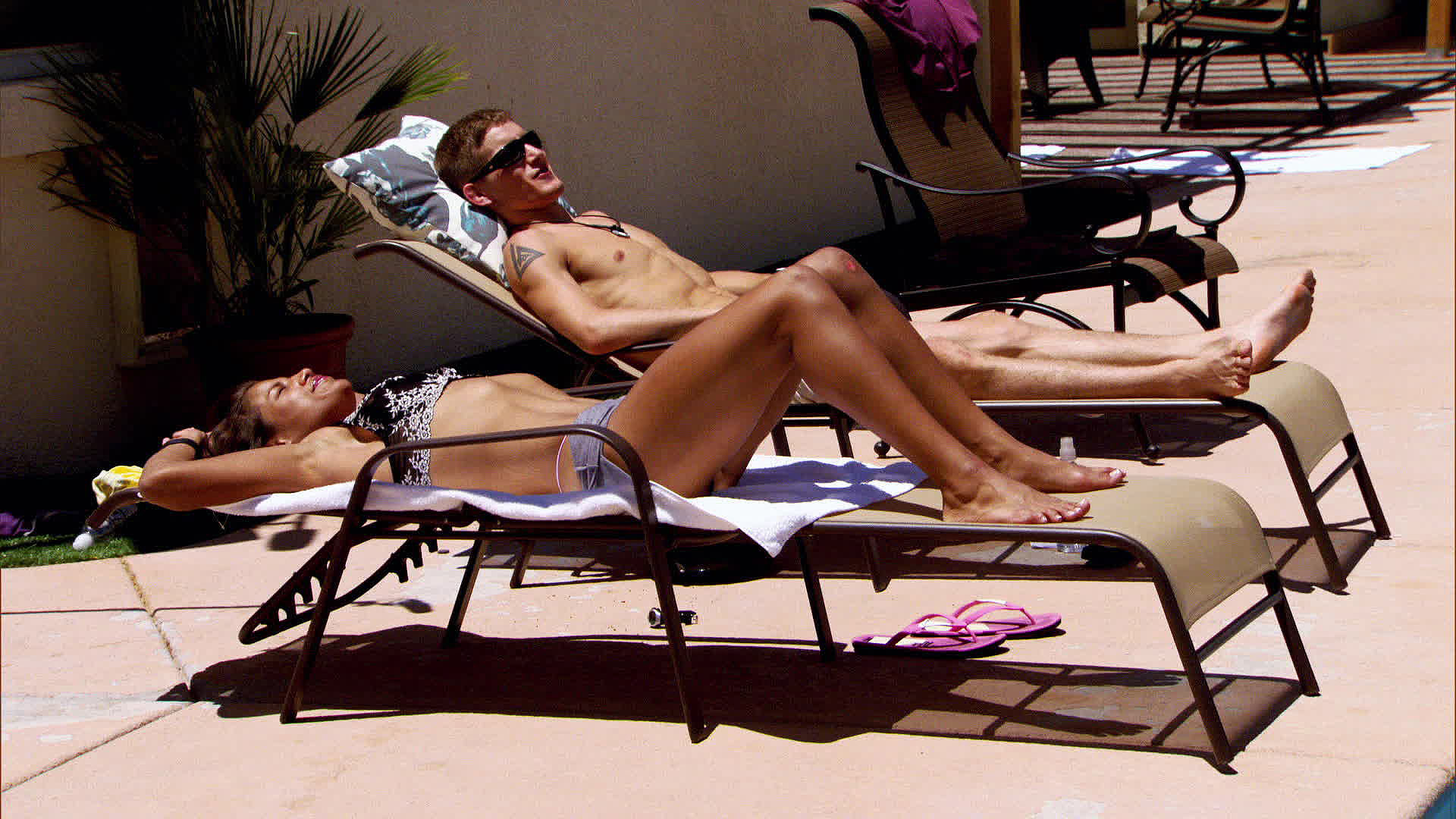 right now appear to be Chris Holdsworth and Julianna Pena. They make small talk that’ll remind you of your awkward high school years. I was waiting for Miesha to show up and pass notes, but to no luck. Holdsworth makes a bold move when he casually drops the “I like friends with benefits” line. Julianna seems interested.
We return from the break and Julianna apologizes to Roxanne for accusing her of leaking information to the other team. Roxanne seems totally unfazed by the whole issue and just wants some peace and harmony. We then learn the truth behind this whole issue -- there’s nothing to it. Jessamyn Duke admits that no one told her anything. She was just giving Raquel a hard time. The damage appears to be done, though as Julianna writes off all her teammates and says, “to hell with them all.”

On to more serious matters, we cut to Chris Beal running. Before he had cancer, he hated to run. Then when he thought he would lose his leg and never be able to run again, it made him appreciate it. Now he runs 6-7 miles a day. We also see him running through drills to prepare for Holdsworth’s grappling. Footwork will be the key to winning this fight for Beal and Ronda 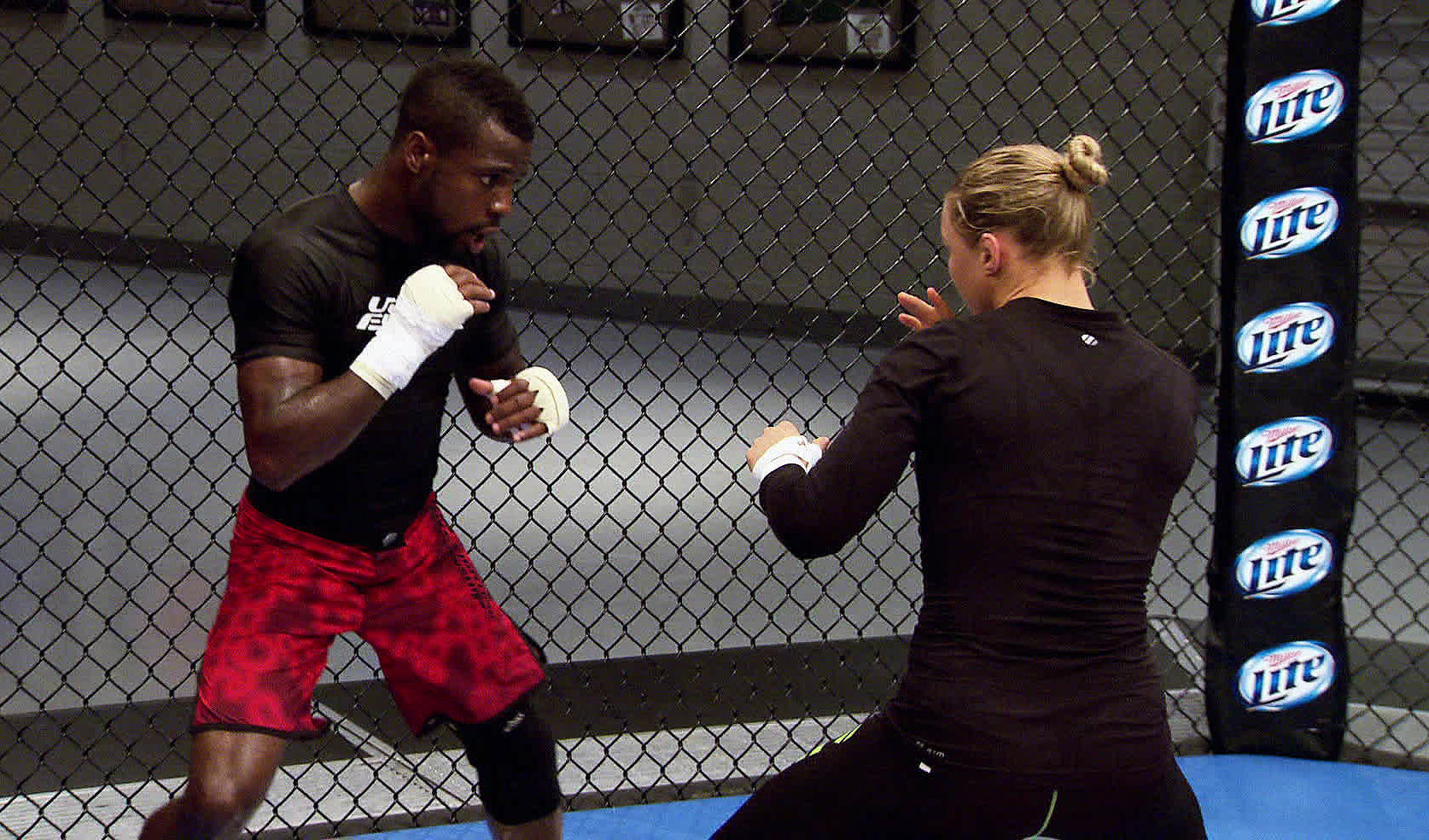 personally works with him to make sure he’s ready.
After the break both teams head out to the Red Rock Casino to watch some UFC fights.   Soon, though, the fights on the TV turn out to be the second most interesting conflicts in the room. As Jessamyn Duke puts it, there’s some “weird posturing” with the coaches at the bar. A comment from Miesha about how Ronda hits pads was the catalyst, but underlying issues were the real reason. It comes as no surprise that Bryan Caraway is the one to blame. Ronda and her coaches are still mad at his Twitter comments from last year. There’s some yelling and a variety of insults, but no physical encounters. We’ll see how long that lasts.

After weigh-ins we see Chris Holdsworth in his room with some of the other guys. He then announces that Julianna had written him a letter. Naturally, he hands it over for someone to read aloud. It’s basically a pep talk, but the gentlemen suggest that this is proof of her desire to hook up with Chris. The nice thing, though, is that there’s no way Julianna will find out and it will come back to hurt him. What are the odds? We’ll have to wait for that answer until next week, it’s fight time.

The round opens with both fighters finding their range and not committing to anything big. 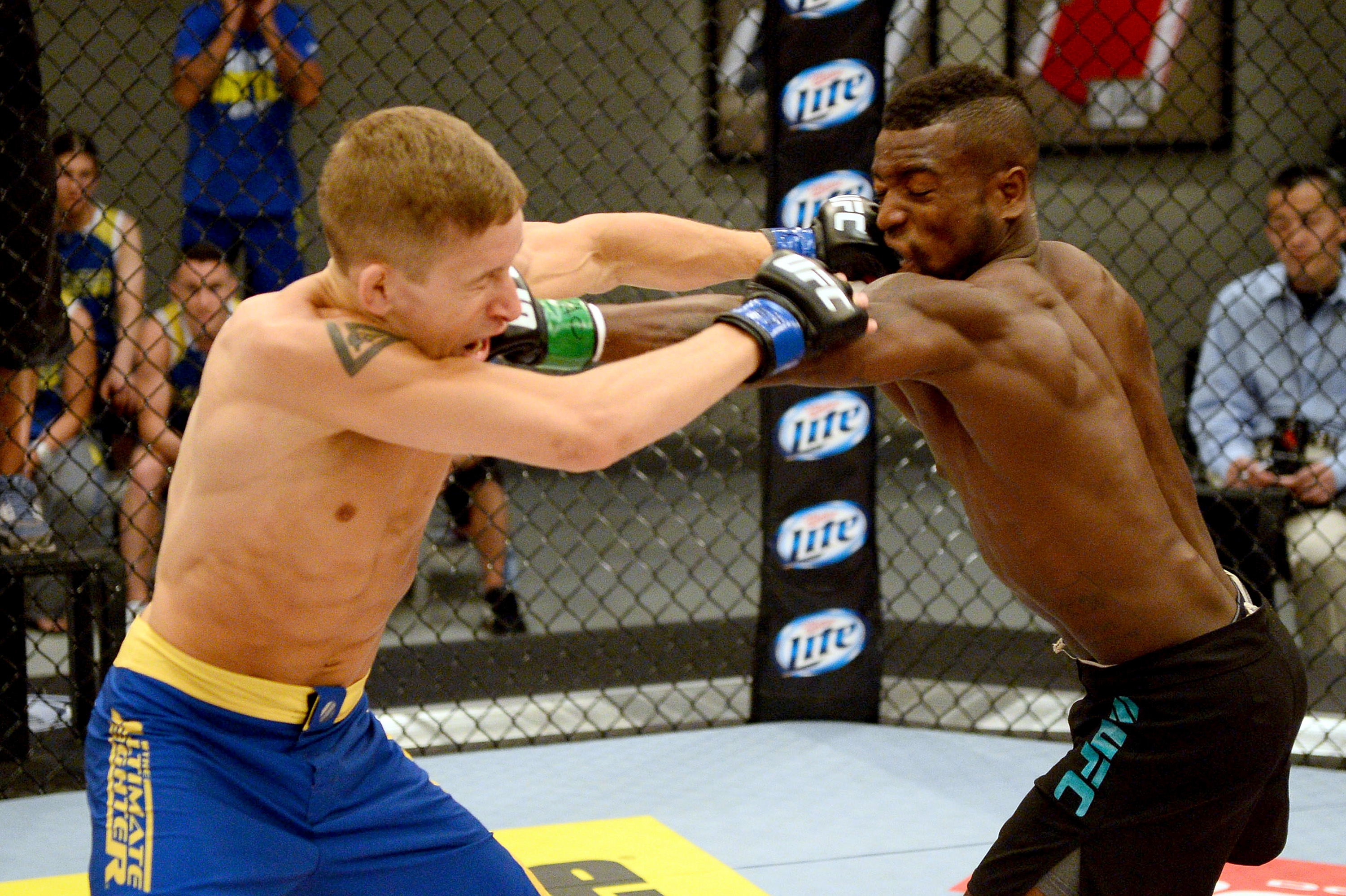 Holdsworth throws an inside low kick, but it connects below the belt. After the restart, both men continue to exchange jabs. Beal is the first to open up, but Holdsworth swiftly avoids. About a minute in, Holdsworth scores the first significant strike of the fight. Holdsworth seems committed to stand up and trade shots with Beal. It looks like he wasn't bluffing when he said he wanted to show off his striking. With about three minutes left, Holdsworth attempts his first takedown. Beal not only defends, but also reverses position and takes top position. Holdsworth attempts an armbar, but Beal powers through. Both men return to their feet and Holdsworth continues to score his jab-cross combos. Beal lands some knees, Holdsworth tries for a double leg, but Beal defends. They circle back to the middle and with just over a minute left, Holdsworth drops Beal with a right hand. Pushing for the finish, Holdworth jumps on top and throws some punches. Then he locks in an arm-in guillotine and Chris Beal taps with 41 seconds left.
Dana can’t believe how things played out. The grappler Holdsworth stood toe to toe with the 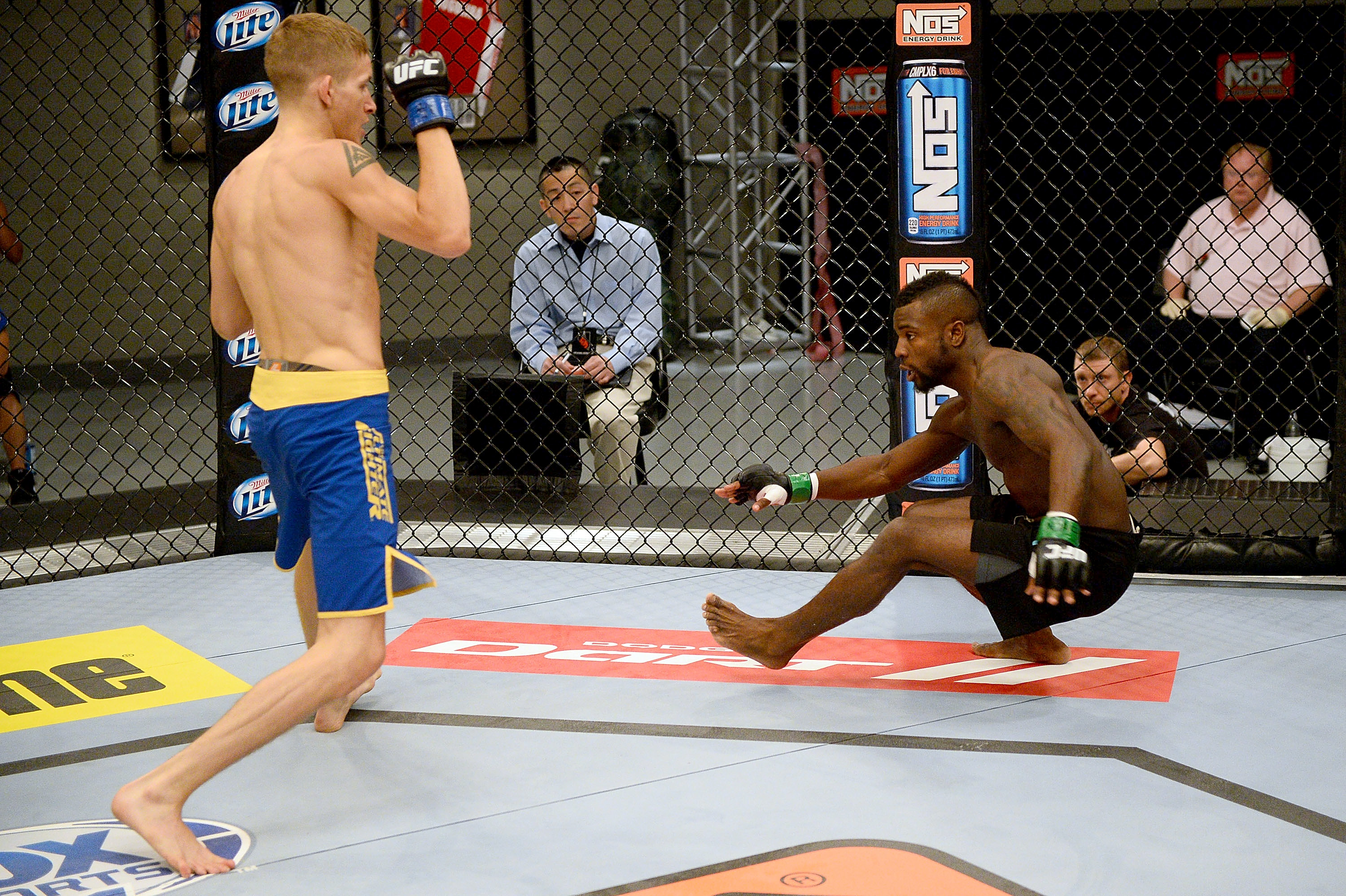 power puncher and beat him at his own game. Ronda still thinks that Chris fought well, he just hesitated too much.
It’s time for the fight announcement. We return to the women’s division for Team Tate’s Roxanne Modafferi and Team Rousey’s Jessica Rakoczy. Miesha believes that Roxanne’s experience and grappling with lead to her to victory. Ronda likes Jessica’s all-around ability, but prefers for the fight to remain on its feet.

The episode wraps up with a sneak peek into next week’s episode. How does Team Rousey vent their frustration? Will the battle of the sexes heat up? Does Chris Holdsworth give Julianna his letterman jacket? Find out this and more next week on The Ultimate Fighter!