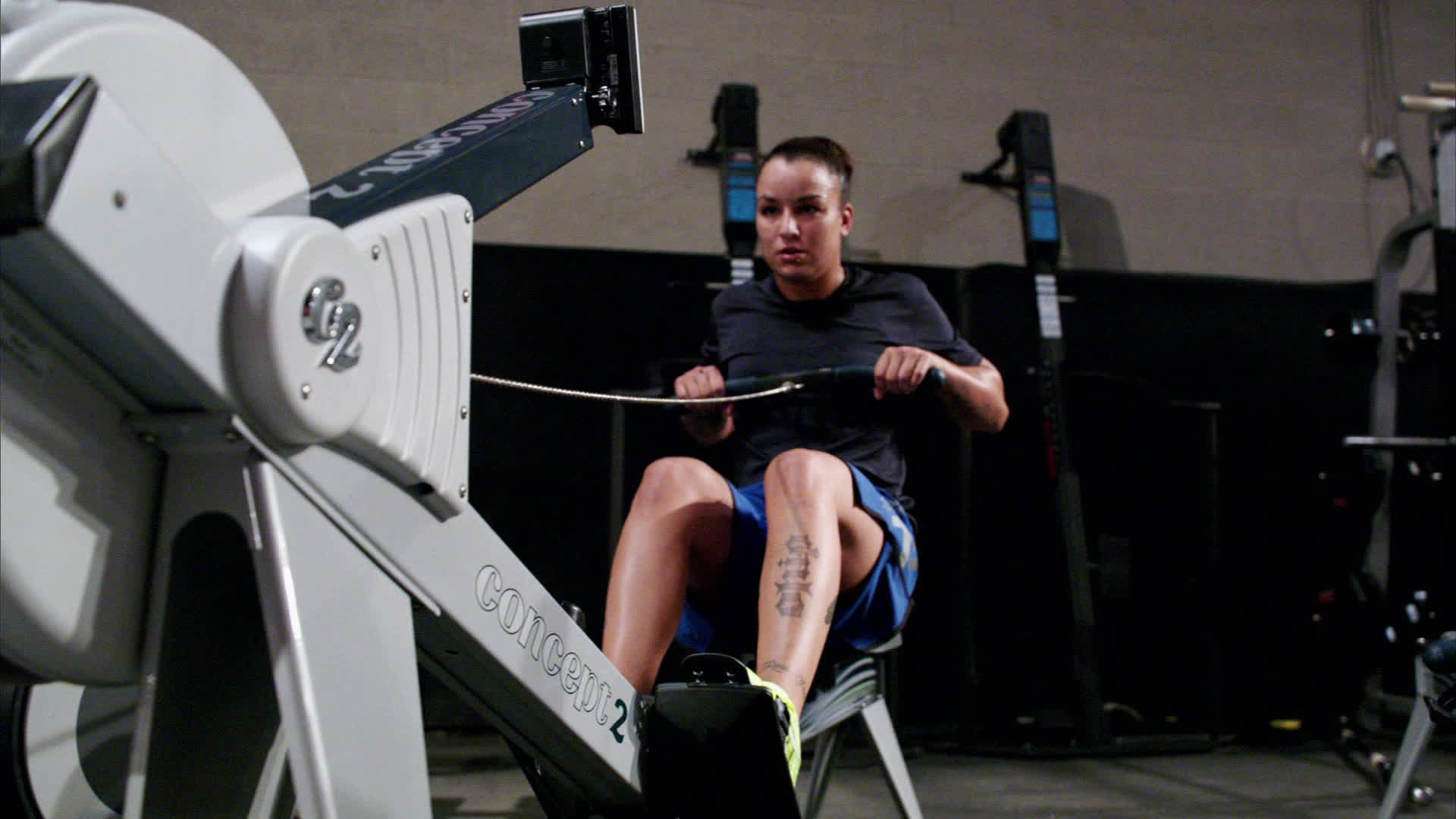 The episode opens with semifinalist Raquel Pennington cutting weight for her upcoming bout against Jessica Rakoczy. Unlike last week’s Anthony Gutierrez debacle, there’s no chance another finalist advances via forfeit. Instead, Raquel talks about her path to an MMA career. A self-proclaimed tomboy, sports were always a part of her life. She even had a number of athletic scholarships to college, but that all ended after a severe snowboarding accident. She discovered martial arts during her path to recovery and it soon took a central role in her life.

From there we cut to coach Miesha Tate and her fight breakdown. Since Jessica is one of the smaller female fighters on the show, Miesha believes that Raquel’s physical superiority will be the deciding factor. Thus, she wants Raqule to bring this fight to the ground and not try to contend with Rakoczy’s high-level boxing. We see a piece of this strategy in Raquel’s training as they drill walking from her corner and immediately seeking the takedown. Raquel says that she’s going to go out there and “bully” Jessica.

Unfortunately, the long grind of TUF has beaten Raquel down. Not only have forearm and shin 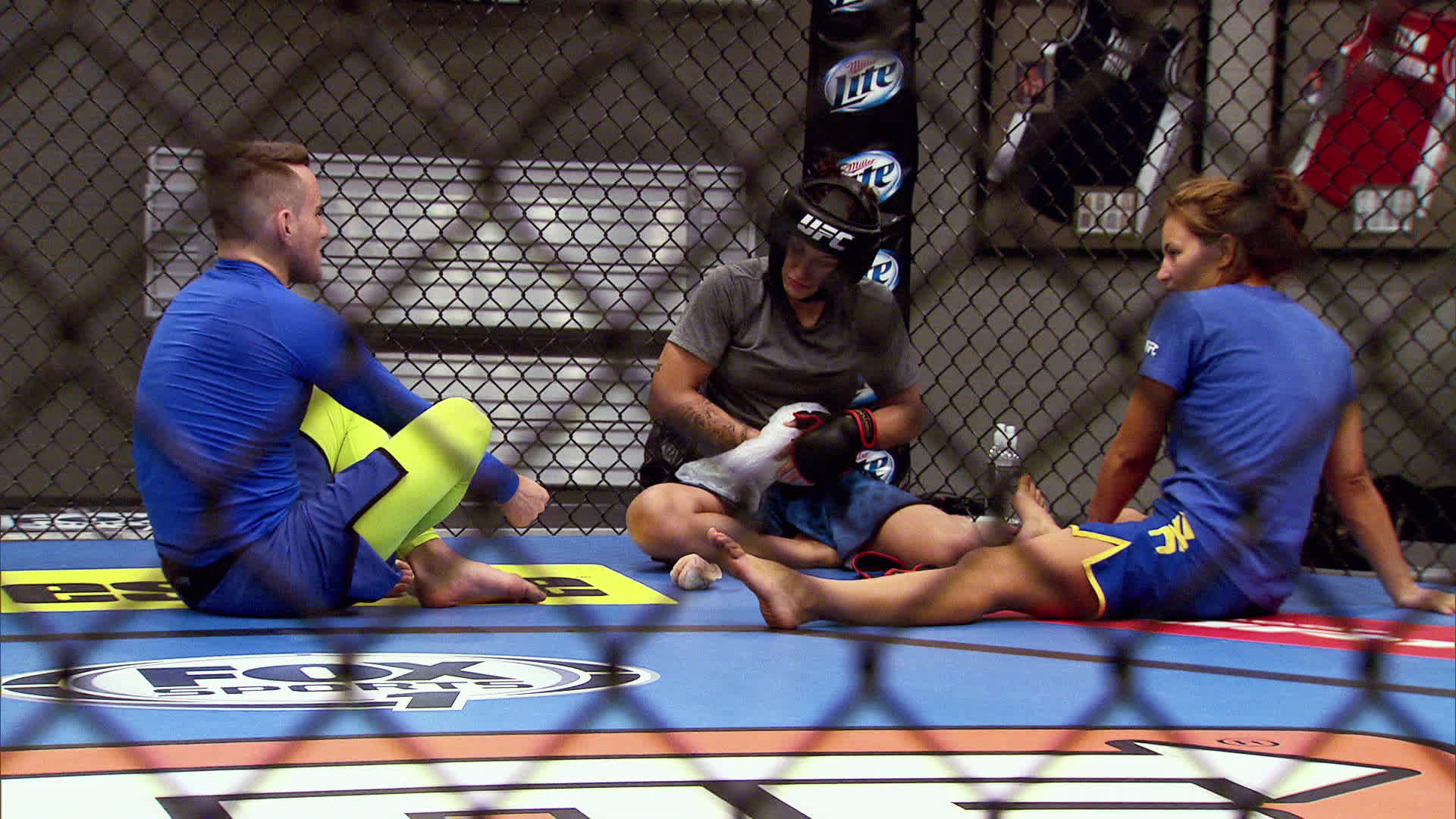 injuries never healed from her first round fight against Jessamyn Duke, she adds another one to the list. While training with Louis Fisette, she winds up slamming him on her own hand and popping a bone out. The coaches try not to panic, but you can see that they’re worried. She can barely make a fist. They try to downplay the severity, but they all do agree that the game has totally changed.
We then shift to Jessica’s training. She knows that Raquel is the bigger, stronger fighter, and the coaching staff has devised a way around those disadvantages. Instead of going toe to toe with her, Jessica plans on using her footwork and speed to avoid prolonged engagements. Ronda agrees and says the their first priority is to keep distance and not let the fight get to the ground. As long as she doesn’t sit and trade in the pocket, she should cruise to victory. Looks like we’ll have the classic striker vs. grappler matchup! 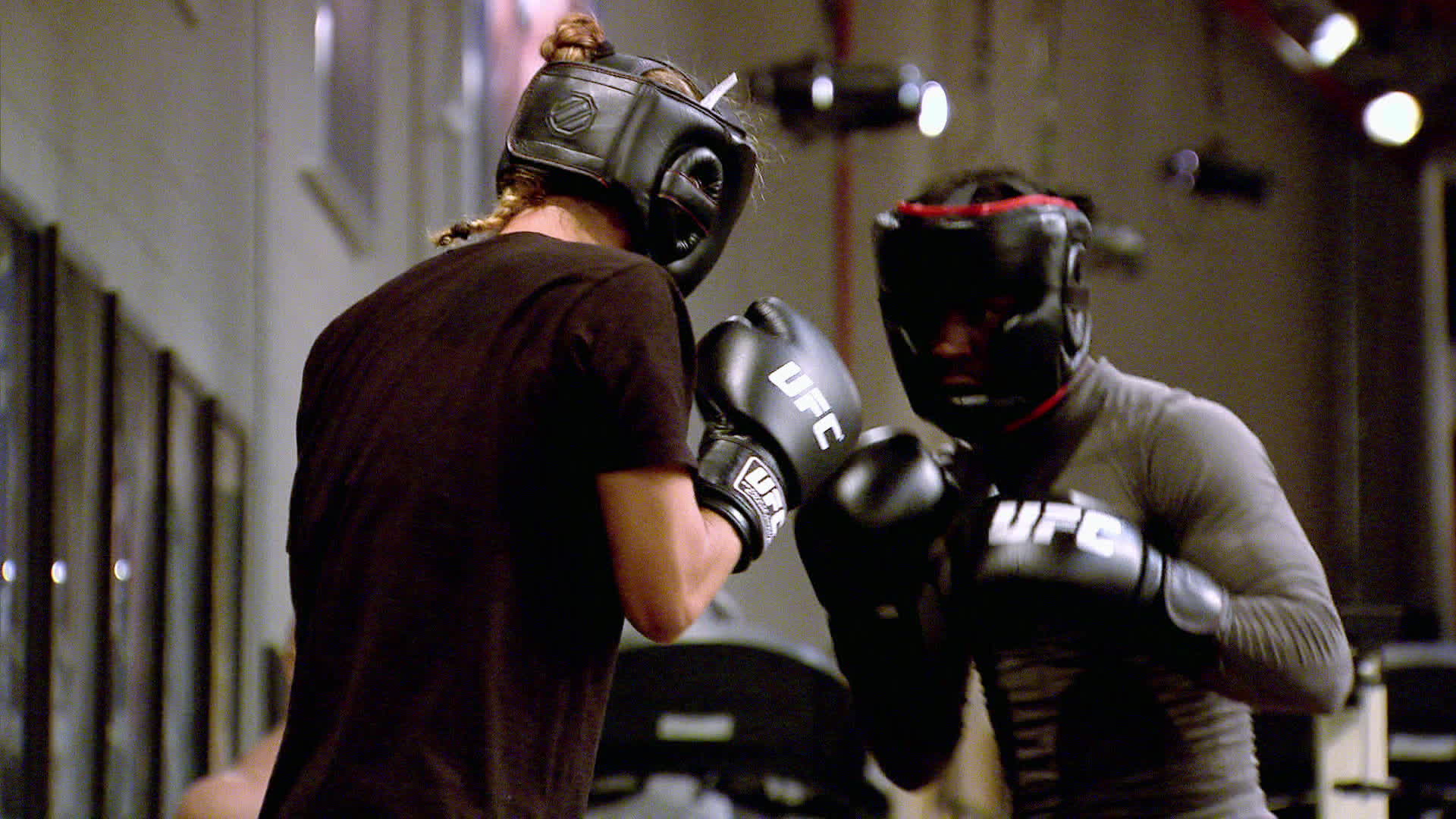 Raquel isn’t the only one with injury problems, though. As Jessica spars with Chris Beal, he catches her with a big right hand that rattles her. Besides making her see stars, it also aggravates the shoulder problems she’s been battling all season. She says that come fight time, she knows that it won’t affect her, but it’s obviously taking a mental toll.

Thankfully weigh ins come and go without issue and it’s fight day. As Jessica stares enviously at David Grant’s bowl full of bacon (let’s hope he doesn’t suffer cardiac arrest before the finals), Raquel gets her hair braided. The two give a couple more words of encouragement, and we move directly to the fight.

The two open up trading jabs. Raquel tries to rush inside, but Jessica maintains her distance well. Both seem to be pacing themselves and trying to get a read on one another. Raquel lands 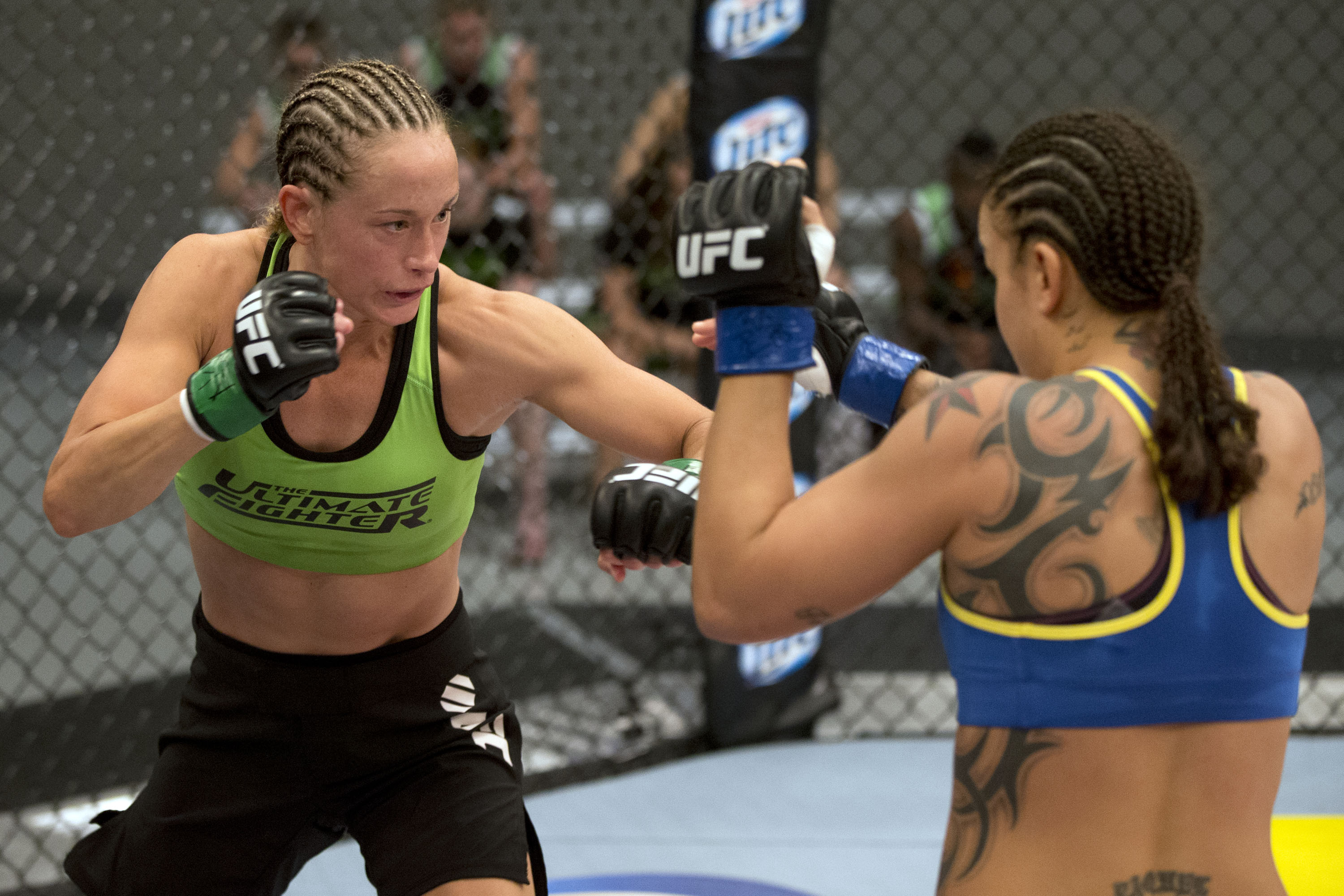 a couple low kicks, but Jessica’s jab controls the engagements. Jessica finally opens up, but she crowds in too close. Raquel quickly changes levels, grabs a body lock and pushes Rakoczy the length of the cage. Pushing her against the fence, grabs a single leg, but can’t finish. She switches to a double leg and can’t finish there either. Raquel keeps at it, though, and finally gets Jessica on the ground. Rokoczy quickly rises to her feet, but Raquel manages to grab a waist-lock. Jessica grabs the fence to stop a trip takedown (and receives a warning), but she can’t stop a second attempt. Raquel finally earns a dominant position, but the round ends before she can mount any offense.
ROUND TWO

The second round opens with Jessica committed to using that jab. As she scores the left hand at will, Raquel just doesn’t appear to have the hand speed to effectively counter. Trying to force some exchanges, she jumps in and eats a left counter hook for her troubles. Visibly frustrated, Raquel seems frozen in place. We can hear Miesha yell from the corner, “Make it a fight!” The words don’t resonate and Jessica still controls all the interactions. The gameplan is working to perfection and her footwork prevents Raquel from getting anything going. With 40 seconds left, Raquel picks up the pace and dives for her first takedown of the round. She’s able to push Jessica against the fence, but the round ends before she can finish it.

As the third round starts, Jessica Rakoczy shoes no signs of straying off her gameplan. She keeps throwing out that jab and moving out of the way before Raquel can mount any offense. 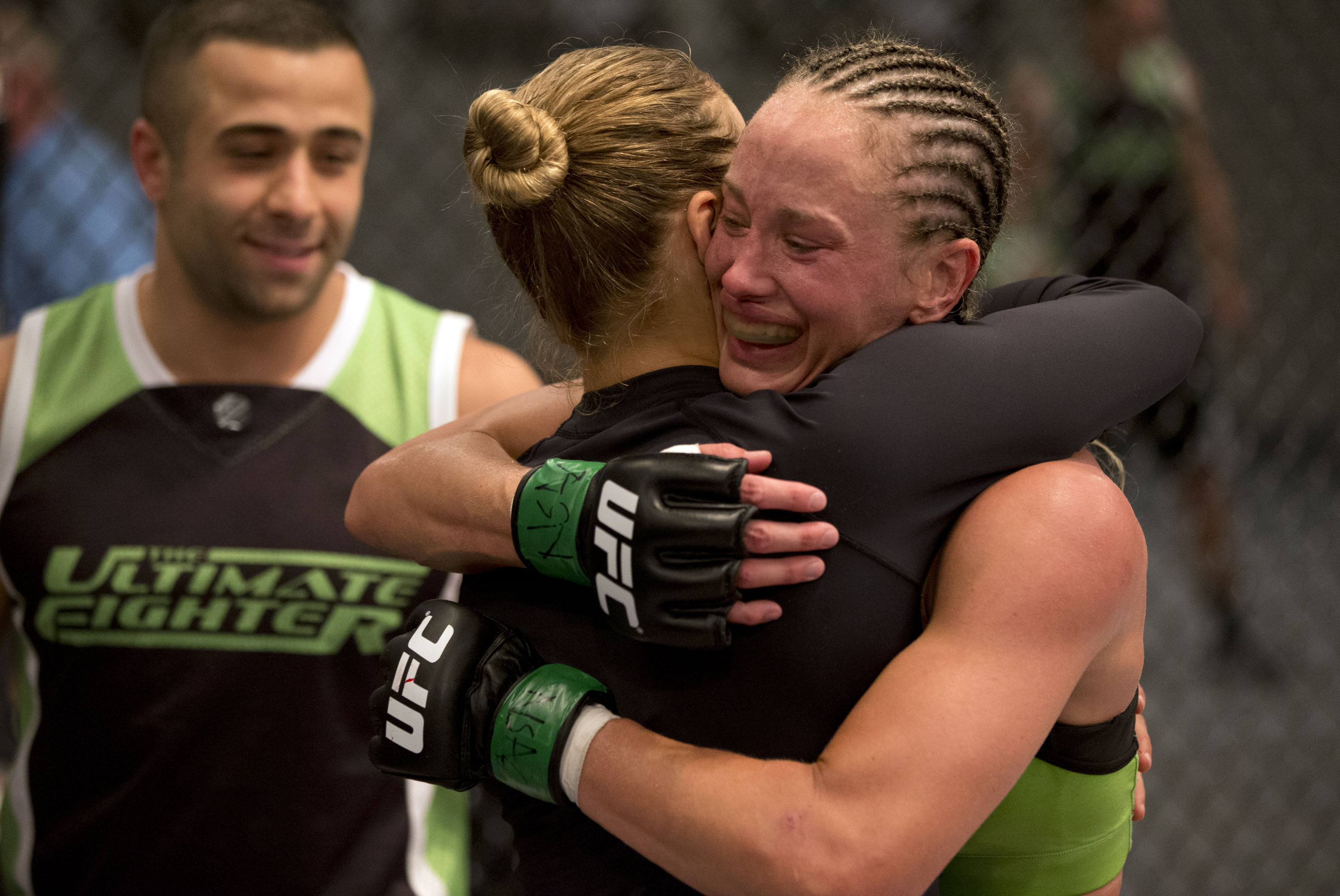 Jessica shows no signs of slowing down and the number of punches thrown even increases. Raquel dives for a takedown, but she’s brushed off with little effort. Raquel continues to press forward, but continues to absorb damage without connecting on any counter strikes. With 30 seconds left, Raquel finally shows a sense of urgency and scores another takedown. Just like the first round, though, it’s too little too late and the round ends.
The judges scorecards come back and all three have it 30-27 for Jessica Rakoczy. Both Dana and Miesha are disappointed with Raquel’s performance and she can’t figure out what was wrong with her. Miesha and Ronda square off one last time. This time Miesha brought some socks with middle fingers on them a present for Ronda. Ronda tosses them aside, but nothing more comes of it. Dana is just grateful that the two coaches won’t have to interact with one another for awhile.

We wrap up with a preview for this weekend’s finals. Will David Grant find a way to stifle Chris Holdsworth’s wrestling? Can Jessica Rakoczy pull the upset? Does Miesh bring a pair of gloves to match the socks?

Find out this Saturday at The Ultimate Fighter Finale!