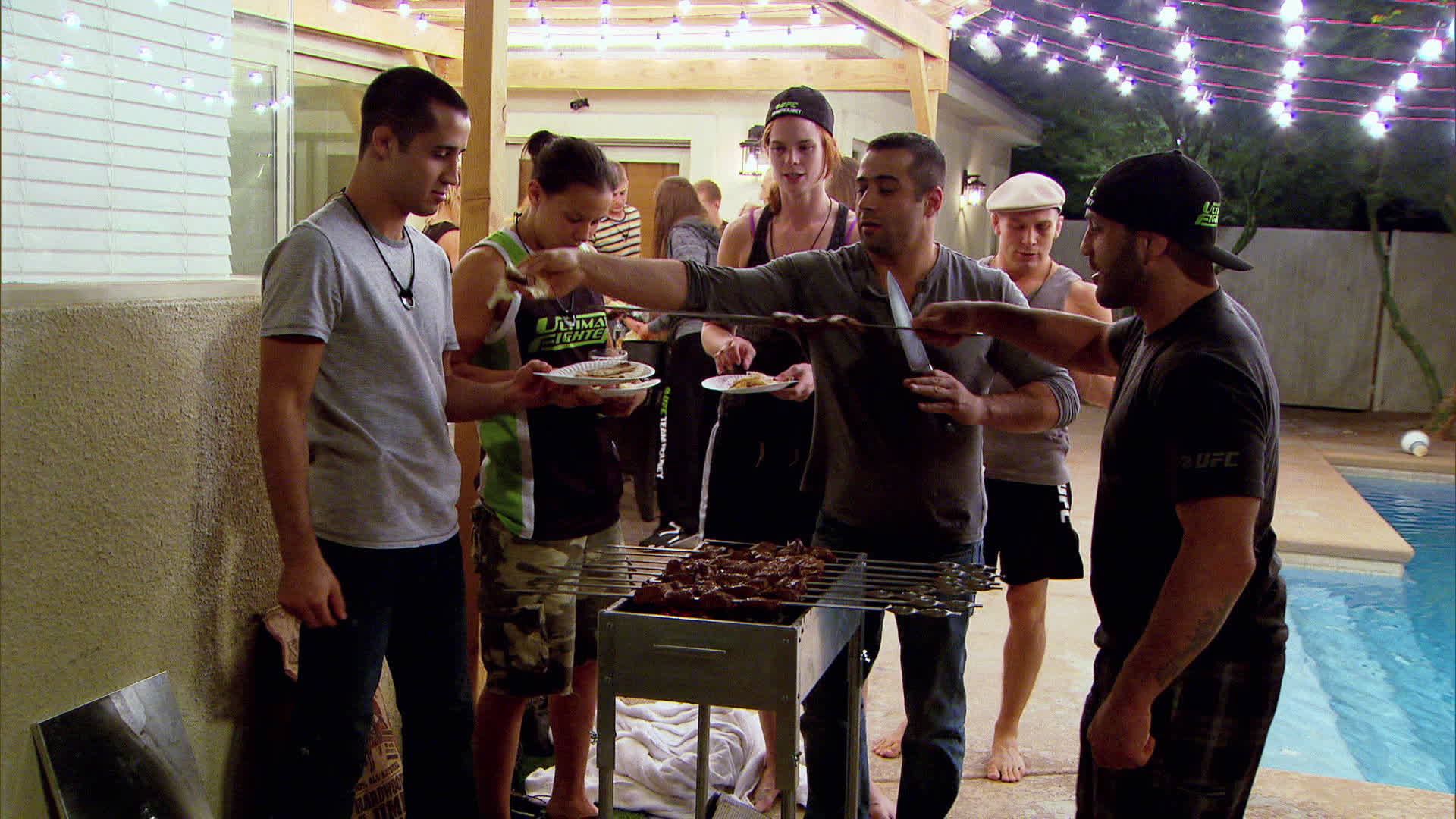 The episode begins with Ronda and the other Team Rousey coaches showing up at the house to grill out. The topic of conversation quickly shifts to the upcoming fight between teammates David Grant and Anthony Gutierrez. David submitted Louis Fisette earn his spot in the semifinals, but Cody Bollinger’s inability to make weight gave Anthony a free pass. Gutierrez brushes off people that say he didn’t earn his way saying that he did his job and that he’s only one punch away from making his dream come true. The last time something like that happened, though, was Gabe Ruediger on the fifth season. Assistant coach Manny Gamburyan was one of the finalists on that season and he expresses his disgust with fighters that don’t make weight. “If you can’t make [weight], give other people a chance.”

From there we transition to gym where Team Rousey struggles with the same issues that plagued Team Tate last week. With teammates fighting one another, they’re not sure what role the coaching staff should play. They ultiamtely decide that the coaches will stay out of each guy’s corner completely. They’ll hold pads, but Anthony and David must choose teammates to coach them. Ronda does show one final technique -- her famous armbar. She even challenges her team to show everyone how she does her infamous move because, “I’m going to get it anyway.”

After a break we’re at the Mandalay Bay Events Center for the the coaches challenge. With the 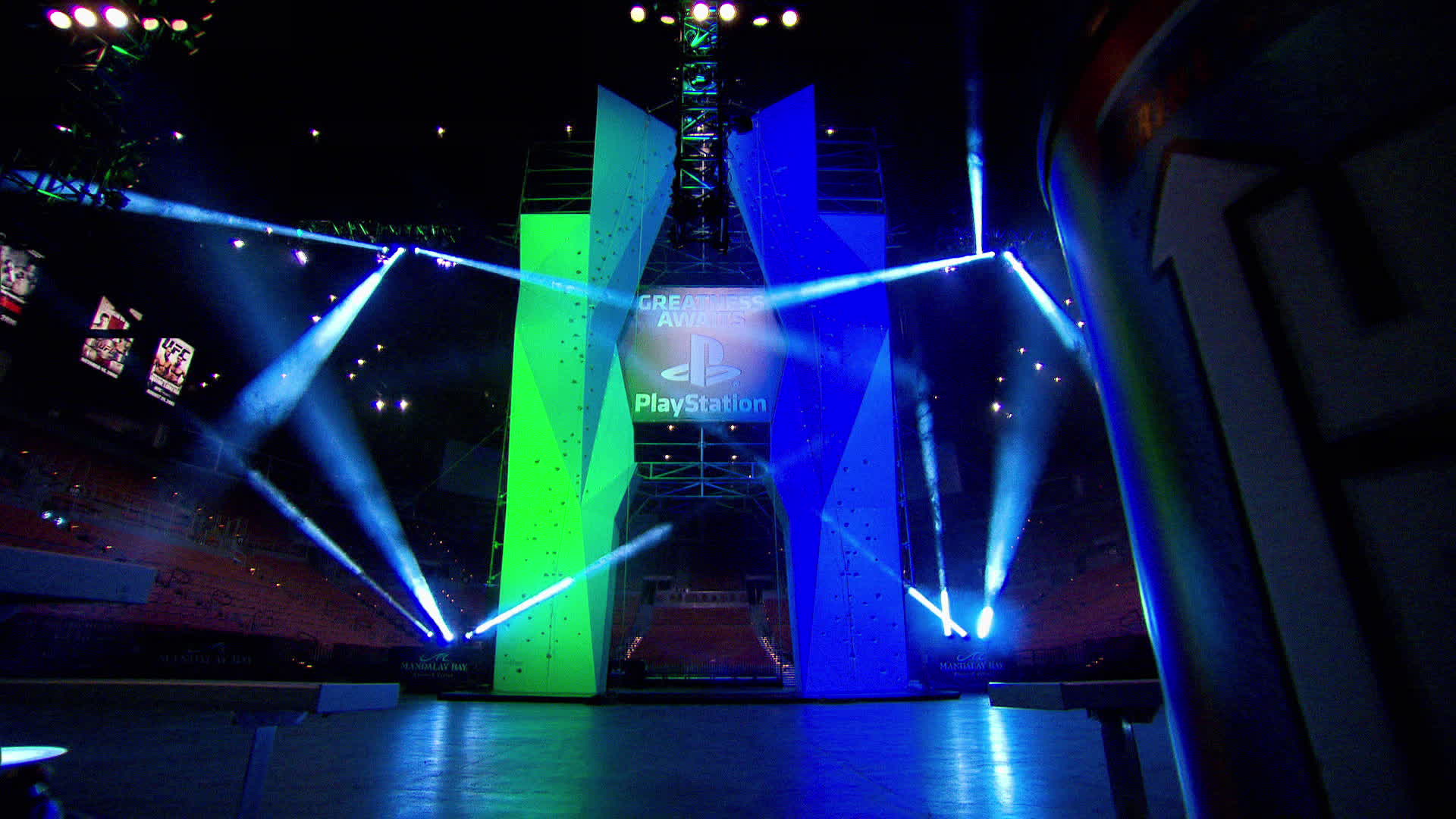 neon lights flashing and music blaring, David Grant thinks he’s about to walk into a dance party. I think we can all agree that a “You Got Served” style dance off should have been the best choice (maybe we can see Chael and Wanderlei do it on TUF Brazil 3). Instead of break dancing their way to glory, Miesha and Ronda will have to scale a 50 ft rock climbing wall. Dana lays out the stakes, first person to the top receives $10,000 and $1500 for each member of her team. Not only that, Dana tells the fighters they can have all the beer and energy drinks they want. Interestingly enough, that’s how he lost his first babysitting job.
As the two coaches begin, Ronda gets off to a slight lead. They’re neck and neck for the majority of the race, but Ronda pulls ahead in the final moments and secures the win. Not exactly gracious in victory, Ronda turns to Miesha, yells, “[expletive] you bitch!” and holds her middle fingers out the whole way down. Miesha calls the move “classy” and Ronda responds, “At least I’m up front about it.” Nothing else comes of it as Dana busts out the bag of money and dishes out the greenbacks. 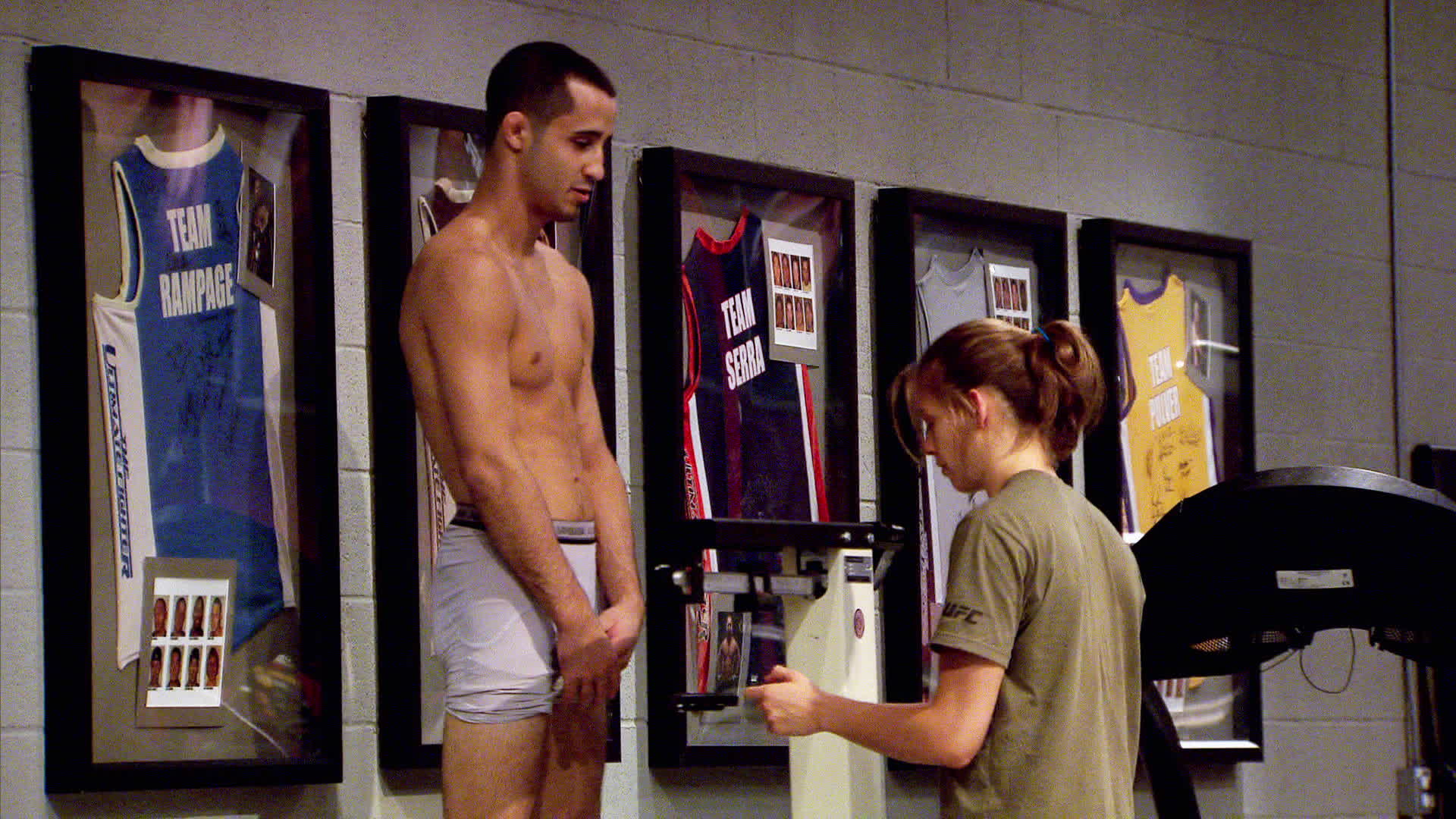 Another break and we’re back at the house. David Grant cant sleep because of all the pressure the big opportunity before him. The topic then shifts to his opponent’s weight. He’s surprised at the amount of junk Anthony consumes, but he won’t let that distract him. Anthony’s eating habits seem to be a topic of conversation in general. Josh Hill and a few others calls his consumption habits irresponsible. Anthony doesn’t really seem to care. This is how he’s done all his previous weight cuts and he’s never had a problem (he’s 151.5 lbs right now). He confesses that he eats, “pretty much whatever I want,” and he’s getting sick of people’s judgmental eyes. He even goes as far to say that they’re dismissive of his dieting because they’re jealous. Haters gon’ hate. Eat that cookie!

One of those judgmental haters is Ronda Rousey. She thinks that Anthony’s way of dealing with weight holds him back and ultimately a detriment to his career. “It’s not about making weight,” she tells him, “it’s how you make the weight.” This causes Anthony to become a bit more agitated. He states that his cardio is the best on the team and wants people to shut up and mind their own business. Did he say this to Ronda’’s face? Of course he didn’t.

We transition back to David Grant and learn more about him. At one time, he was a big DJ in England and used to spin at the biggest clubs in London (his dance party comment makes more sense now). Once he had his kids, though, he cut back on that lifestyle and they’ve helped him maintain focus. He wants his boys to be proud of their dad. In order to accomplish that goal, he plans on outboxing Anthony. 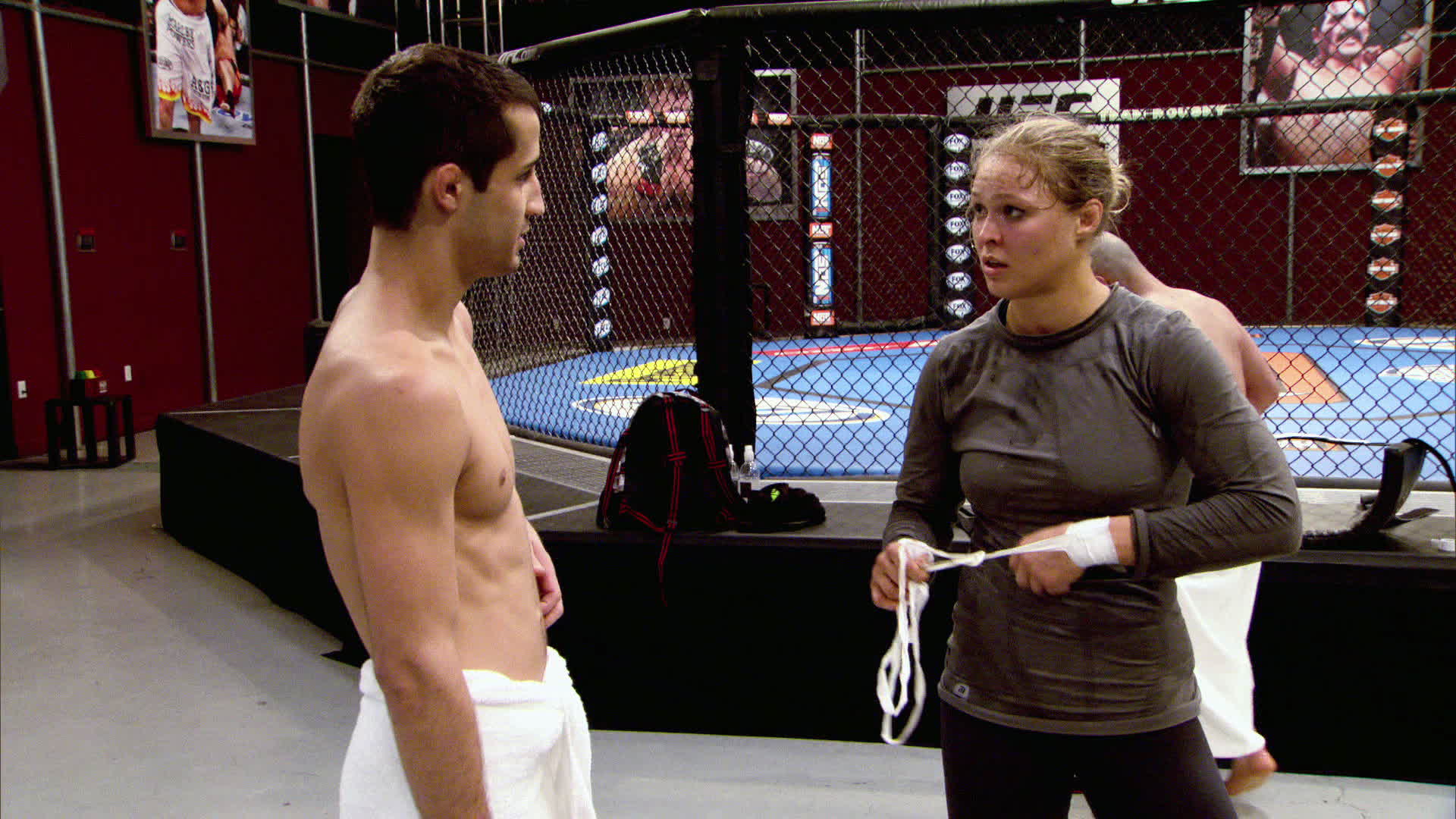 in for the Epsom salt bath and realizes that he’s using some of Cody’s old stuff. Is this a sign of things to come? He heads over to the training center and Ronda stops by to check on him. Anthony asks her to just give him some space and she concedes. She tells the camera, “He has his method and his way so I’m sure he’ll be fine.” For someone that usually appears so self-assured confident, Ronda doesn’t seem that confident. They check his weight and he’s 143 lbs with only two hours remaining. Shayna Baszler informs us know while Anthony says he has been strict about his diet the last couple days, he was drinking water last night and even had a NOS this morning on the way to the gym.
The weigh-ins start and Davey clocks in at 135.5 on the scale. Anthony steps up at 140, and has one hour to lose the remaining four pounds. This news appears to be too much for him and he breaks. He keeps muttering how it’s impossible for him to lose the weight, but Ronda doesn’t want him to quit. Even if he can’t do it, he should give it the full hour. Anthony apologizes and walks out. Manny follows him and tries to inspire him to get back in there, but Anthony calls it quits. This angers Manny and he tells him, “You don’t deserve to be here.” Dana interrupts them and brings Anthony in to address the whole cast. Anthony admits, “My priorities weren’t right, I [expletive] a huge opportunity. I’m sorry.” Either blinded by rage or disgust, Dana doesn’t lay into him. He simply says, “Leave.” After Anthony walks out, Dana and Ronda talk in his office. Ronda apologizes and takes takes responsibility for the mess. Dana doesn’t accept it. “You can’t give people heart. He doesn’t have it. That has nothing to do with you. This competition weeds out the weak. He is weak.”
That wraps up the episode on a somber note, but we get a preview into next week’s episode. Who wins the last fight between Jessica Rakoczy and Raquel Pennington? How will injuries affect their performance? Do Anthony and Cody decide to open up their own food truck together? Find out this and more next week on The Ultimate Fighter!