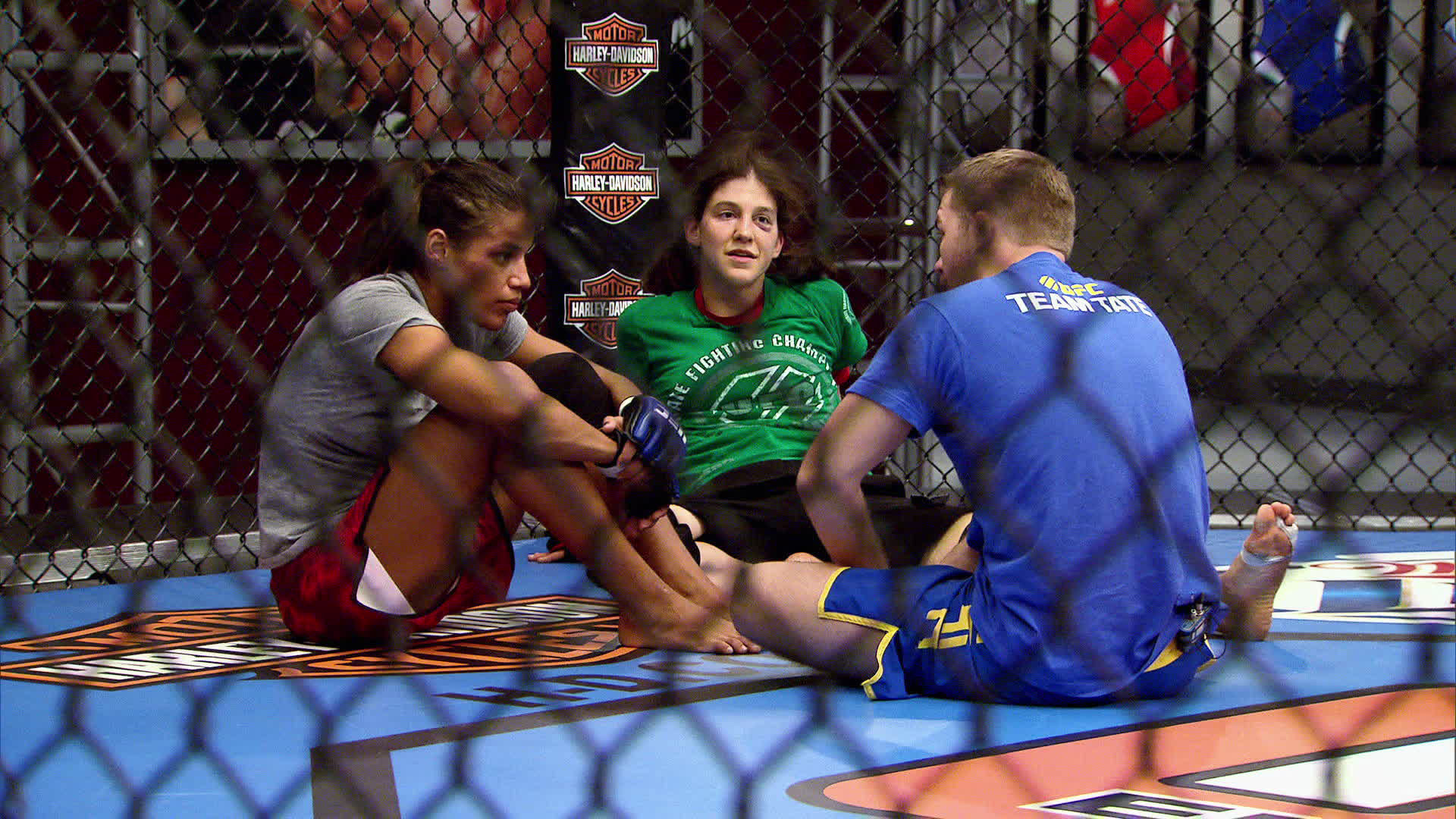 The episode opens at the training center and the continued troubles on Team Tate. With the upcoming fight between teammates Julianna Pena and Sarah Moras, Miesha has noticed how the team dynamics have changed and Julianna is becoming increasingly ostracized. Miesha also informs us that this won’t be the first time Julianna and Sarah have fought. Their first match took place in April of 2012 with Sarah earning the TKO via doctor’s stoppage. Apparently Sarah locked in an armbar, Julianna didn’t tap and it caused some major damage.

Not wanting to be caught by the same move again, we see Coach Tate drilling armbar defense with Julianna as Sarah sits in the background watching. Sarah repeats her charges that the coaching staff is playing favorites with Julianna and it finally sets her off. The coaches find Sarah in the sauna crying and Miesha tries to comfort her. “We’ll fix it. I promise” she tells Moras. Wanting to make things fair, Miesha decides to split up the assistant coaching staff. Sarah will have two coaches exclusively train her and Julianna will get the other two. In an effort to maintain neutrality, Miesha decides to sit out the training completely. The next day when Julianna asks Miesha to spar with her, Coach Tate explains the new set up and Pena is not pleased. She says that it hurts her feelings and that “I want all the coaches to be on my side.” Maybe Miesha should have played this video at the beginning of the season. 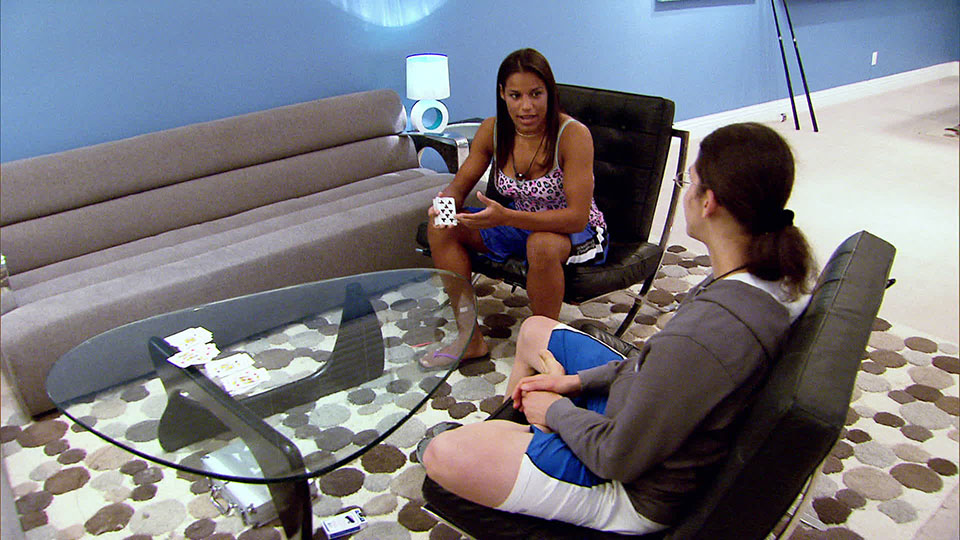 course of the season. Anthony Gutierrez even says that the “Happy Warrior” Roxanne Modafferi doesn’t like Julianna, and adds that if Roxy doesn’t like you, “you know you’re failing at life.” For her part, Julianna just doesn’t seem to understand why there’s all this animosity towards her. The only theory she comes up with is that the guys are mean to her because they don’t want their girlfriends to see them talking to a pretty girl like her.
Back at the gym, the humble Julianna sees Miesha showing Sarah a technique and becomes upset. Miesha doesn’t seem too concerned and brushes it off as the usual Julianna stuff while assistant coach Bryan Caraway calls Pena, “Awesome, but a little crazy.” While Julianna doesn’t seem to be getting any sympathy from friends, Sarah commits a faux pas of her own. While working some ground and pound drill with coach Ricky Lundell, she drops an inadvertent elbow and gives Roxanne a big black eye. After some apologies, coach Lundell and Sarah reveal their game plan. Unsurprisingly it consists of bringing the fight to the ground and locking up that armbar again. Ronda Rousey stops by the house to show off her tailoring skills, but other than Julianna not getting one and Sarah saying she’ll sell it on eBay, nothing of note happens.

Another break and we’re still at the house and there’s more Team Tate intrigue. Julianna tries to squeeze some information from Roxanne and asks her what she’s been working on with Sarah. 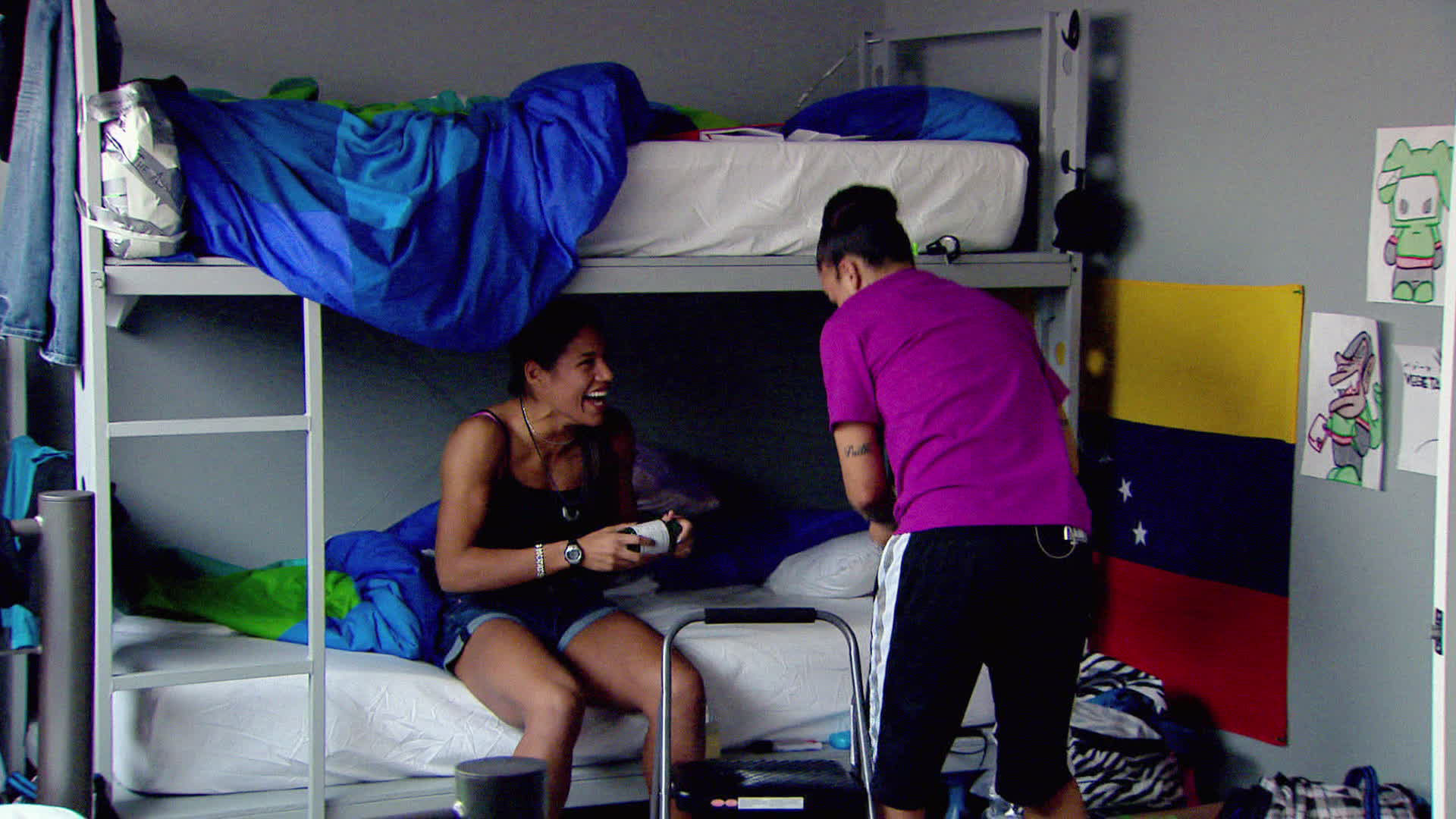 Despite taking that elbow to the face, Roxy refuses to talk, citing that it would be a violation of trust. Julianna doesn’t seem to understand and presses more, but Roxy doesn’t budge. Even in her own bedroom Julianna doesn’t catch a break as the tension with roommate Raquel Pennington comes to a head. Raquel complains about making a lot of noise in the morning while she’s trying to sleep. Julianna blames Raquel for staying up late and “dragging” ass. In response, Raquel accuses Julianna of playing the victim card and Julianna loses it (again). She gets so upset she busts out the “Nobody puts baby in the corner,” line. Maybe Miesha can bring in Patrick Swayze as a guest coach to fix things. Roommate drama aside, we finally hear about Julianna’s plans for the fight. Julianna also works on a guillotine choke attempt with Roxanne, but Bryan warns her to be careful when to implement it.
Weigh-in goes on without an issue (other than everyone hoping Julianna loses). Back at the house Bryan and Miesha stop by to check in on everyone, but forget the silly sring this time. Miesha sees that Julianna has shut herself off from the others so she goes upstairs to talk to her. They discuss the charges of favoritism and after being politically savvy the majority of the episode, Miesha is surprisingly candid. She takes Julianna’s side and said she’s not playing favorites, just rewarding the people that deserve it. “You and Holdsworth are the two hardest working people on the team,” she tells her, and that’s why they get the extra attention. Sure sounds like favoritism, doesn’t it? That’s enough of the Team Tate dynamics and it’s finally it’s fight time. 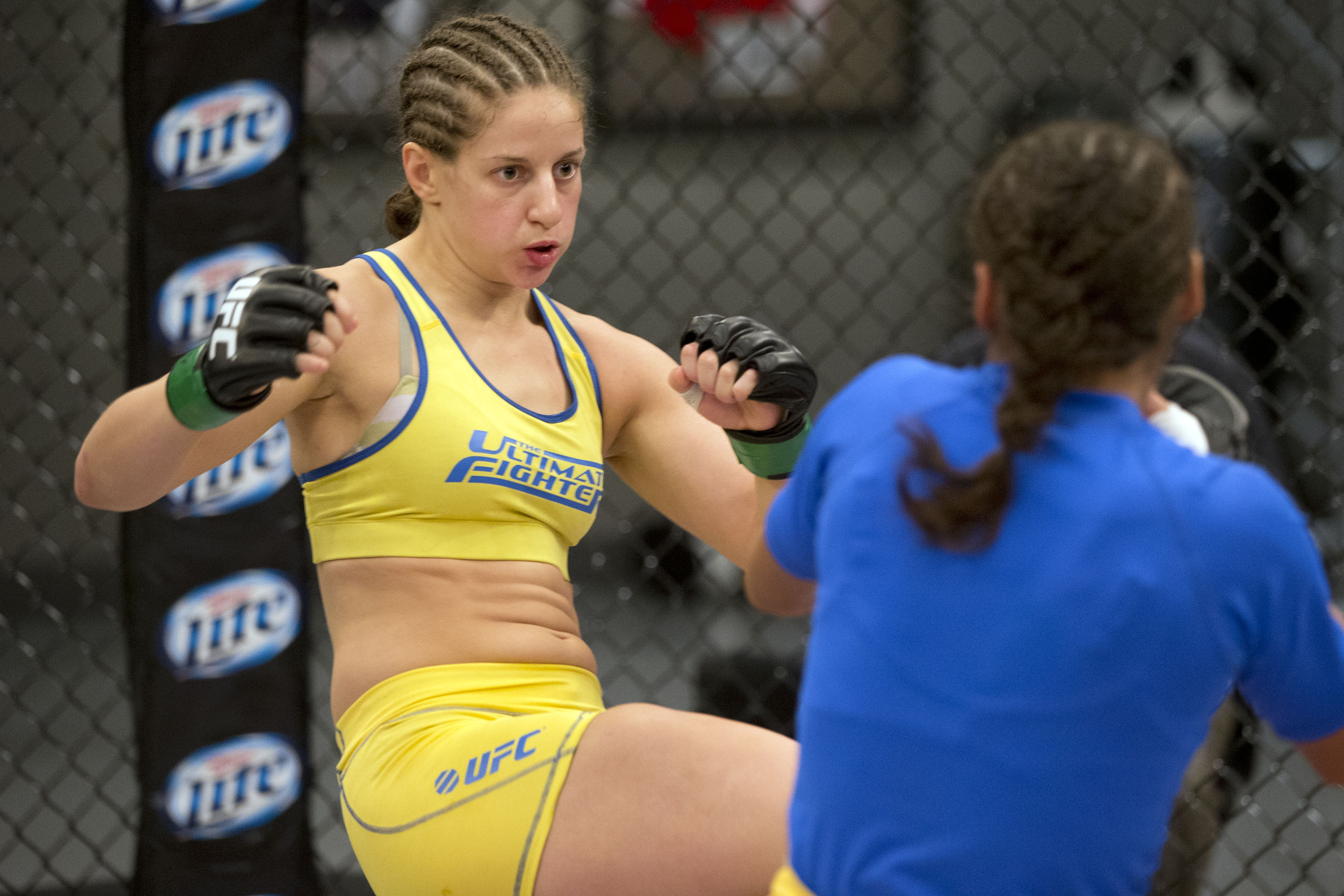 and Sarah Moras jumps in to stop the onslaught. They clinch and while Sarah tries to get the takedown, Julianna actually winds up on top. Working from guard, Julianna stacks Sarah up and tries to pass. Sarah’s guard opens, and despite her coach’s pleas for get off the mat and bring it back to the feet, Julianna jumps right back into guard. Sarah keeps angling her hips looking for the armbar, but Julianna does a great job squaring up to prevent Moras from working any offense. Julianna passes to half guard, but Sarah quickly recaptures the full guard. Julianna climbs to her feet, but she again ignores Bryan Caraway’s advice and dives back in with leaping right hand. The punch connects and Julianna moves to side mount. Sarah tries to flip over by pushing off the cage, but Julianna stops it. Julianna drops some short elbows and the round ends with Pena in a dominant ground and pound landing.
ROUND TWO 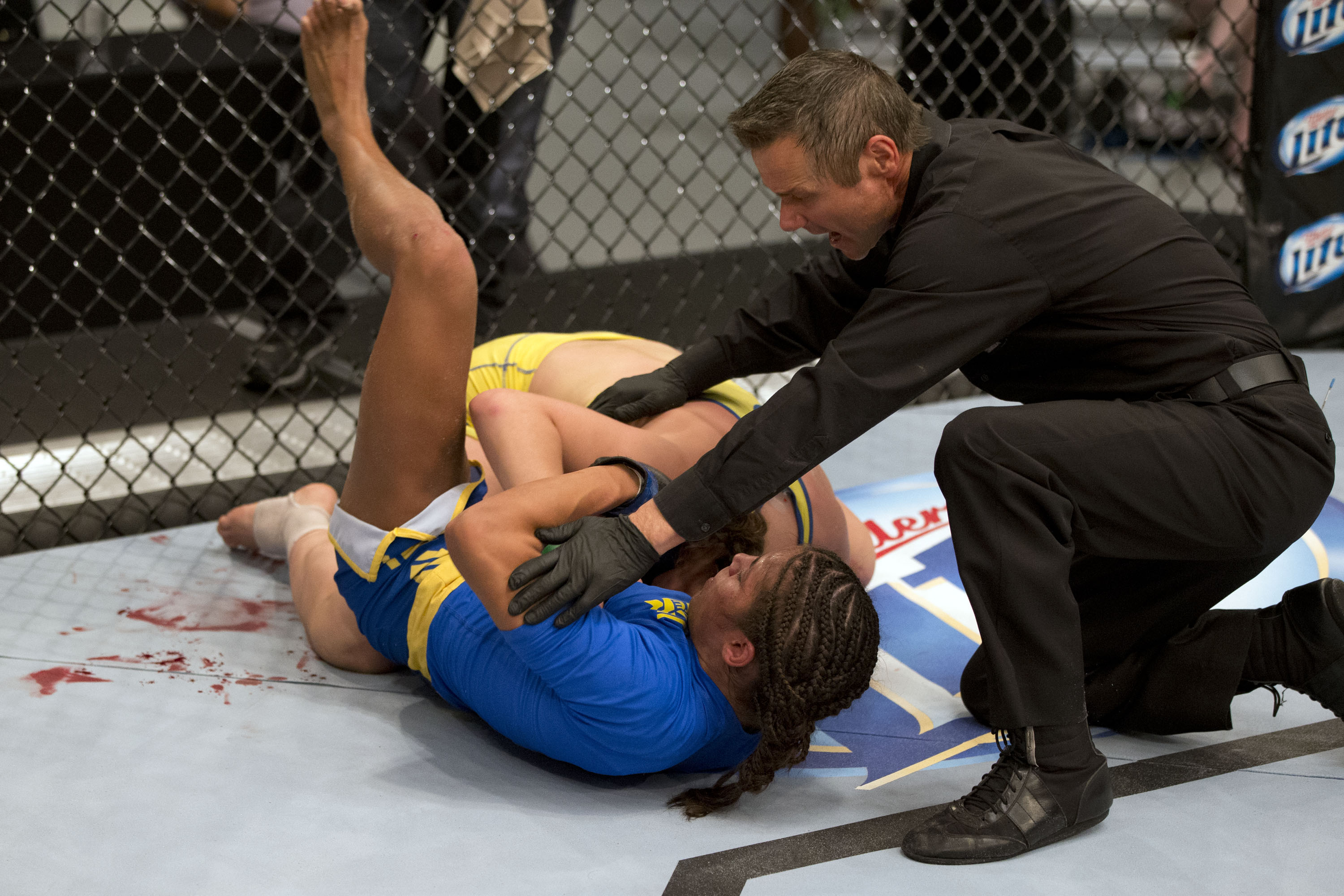 Julianna wastes no time bringing the fight to Sarah as the second round begins. They soon tie up and lay against the fence. Julianna brings them back to the middle of the cage and drags Sarah to the ground. There’s a brief scramble and Julianna is back in side mount. Julianna is in control and keeps attacking from top position. Sarah tries to slide out the side, but she doesn’t quite finish and finds herself in an even worse position. Sarah eventually gets to her knees and Julianna moves to a front headlock position. They pause briefly and Julianna dives for the guillotine they practiced. Caraway was probably worried, but there’s no cause for concern as Pena secures the tap out with 1:29 left in the round.

There’s some tepid applause from the other housemates, but Dana White and Miesha Tate are pleased. We close out with a sneak peek into next week’s episode.

Who wins the coaches rock climbing challenge? What’s the unexpected turn that will affect the finale? Seriously, can we get a Swayze appearance? Find out this and more next week on The Ultimate Fighter!