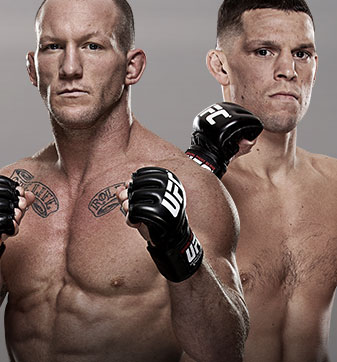 The 18th season of The Ultimate Fighter will come to a close this weekend when the men and women's finalists from the bantamweight division square off, along with a trilogy coming to a close as Gray Maynard meets Nate Diaz in the main event of the evening.

Maynard and Diaz will look to settle their score in a rivalry that actually started all the way back during The Ultimate Fighter season 5, when they faced off on opposing teams on the show.

Now with both fighters looking to get back from recent losses while closing this chapter on their respective careers, Maynard and Diaz will be gunning to make a statement in this fight. Also on the card, the first ever women's Ultimate Fighter will be crowned as Julianna Pena takes on Jessica Rakoczy, while Chris Holdsworth aims to finish Davey Grant on the men's side.

In today's fantasy preview we will break down the main card and the matchups that will take place Saturday night from the Mandalay Bay Events Center in Las Vegas.

Maynard and Diaz first got acquainted during The Ultimate Fighter season 5 when both fighters were almost at the finish line to make it to the finale.  When it was all over, however, Diaz stood tall as the victor as he submitted Maynard by guillotine choke in the second round.  The rematch between the two fighters took place in 2010, with Maynard getting the advantage by winning a split decision after a back and forth standup fight.

How the fight unfolds depends in large part how Maynard approaches Diaz this time around.  Maynard is a powerful wrestler when he decides to employ that part of his game, but lately he's been all about boxing with his opponents.  He has to know Diaz has a dangerous jiu-jitsu game, as evident from their first fight, but a standup fight might just be what the doctor ordered for the Stockton native.

Diaz's boxing has gotten dangerously good lately and he puts together a volume of strikes like few can in this sport.  Maynard will have some help from his teammate Josh Thomson, who just recently knocked out Diaz, but when it comes to the way they fight, the two team members at the American Kickboxing Academy are almost exact opposites.  If Maynard just tries to pressure the action and push forward with big looping punches, it plays right into Diaz's game.  With an insane 3.89 strikes landed per minute, Diaz will start racking up the points from the moment the bell sounds and he won't stop until the final horn signals the end of the bout.  Unless Maynard decides to remember his wrestling roots, he may come up on the losing end of a decision to Diaz this time.

As this season of The Ultimate Fighter started, two names that definitely didn't appear on the 'favorites' list were the two finalists competing for the six-figure UFC contract on Saturday night.  Julianna Pena may have been Miesha Tate's top pick but very few people expected her to get past veteran fighter Shayna Baszler in the opening round, and Jessica Rakoczy was the last fighter selected overall. Now they meet in the final, with the winner becoming the first ever woman to be declared The Ultimate Fighter.

Pena has gained a reputation during the season of the show as a gritty wrestler who can drop anvils on an opponent if she gets in the top position.  She's got razor-like elbows and a suffocating submission game as well, which she unleashed on all of her opponents during this season of the show.  On the other side, Rakoczy is still evolving, but as a former boxing champion she's already an established danger on the feet.  Her submission game is highly underrated, however, so Rakoczy is not to be taken lightly anywhere in this fight.

Still, it's impossible to ignore the positives that Pena brings into this fight.  She's got the takedowns to put Rakoczy into uncomfortable spots on the ground, and her tenacity is unmatched in the division.  Pena will get in Rakoczy's face from the moment this fight starts, and she's like a pitbull going for the finish.  If this fight goes anything like her last few, Pena should be able to wrap up the Ultimate Fighter title with a win and maybe even take home Submission of the Night honors to boot.

Team Alpha Male fighter Chris Holdsworth definitely looked to be the best of any of the men's fighters on the show this season, with three dominant wins to make it to the finale, but that doesn't mean Team Rousey's Davey Grant should be overlooked in this one.  Grant had an easy time making it to the semifinal round before his next opponent Anthony Gutierrez was unable to make weight, thus pushing the British fighter to the finals without even competing.

Grant should not be underrated because of this lone factor because he is a force to be reckoned with and Holdworth will find that out on Saturday night.  What Grant brings into this bout that makes him different than many British fighters before him is his wrestling and grappling acumen.  Grant has a great base for his own takedowns, and with several submission victories on his record already, he's definitely not afraid of the ground game.

What Holdsworth missed out on during the show was an opponent like Grant, who would bring the fight to him and make him miss.  Grant has the kind of pressure-filled attack that could throw Holdsworth off his game, and once the minutes start ticking away it's going to be harder and harder for him to pull off a submission, which is his strongest area.  If Grant stuffs the takedowns early or even lands a couple of his own, he will set the pace and show to be the better fighter over the course of three rounds for a decision victory, joining past British greats like Michael Bisping and Ross Pearson as Ultimate Fighter champions.

The two tallest ladies from The Ultimate Fighter this season will square off as former Team Rousey members Jessamyn Duke and Peggy Morgan meet at the finale.

Since leaving the show, Duke has relocated to California, where she's been working tirelessly alongside her coach Ronda Rousey to get ready for this upcoming bout.  Training with the best women's fighter in the UFC is never a bad way to prepare for an opponent, and Duke has had Rousey and her entire coaching staff at her disposal for the past several weeks.  Duke is a well rounded fighter, although she does tend to like the striking game better than any other facet of MMA.

At 6'1" tall, Peggy Morgan will usually hold a distinct reach advantage over an opponent, but with Duke standing 5'11", that will largely be negated for this fight.  Morgan is also a stand and trade type fighter, who matches Duke in terms of experience outside of The Ultimate Fighter. The difference here is how fast these two women developed before they meet on Saturday night, and in that case the edge goes to Duke.

While Morgan is a former featherweight who cuts down to 135 pounds, Duke's toughness and durability should carry her through any early onslaught from her opponent.  As the fight progresses, expect Duke to vary her attacks with striking and a clinch game, maybe even mixing in a takedown or two along the way.  The worst thing Duke could do in this fight is to allow Morgan to control the range and pick her apart from the outside.  Assuming Duke gets inside and keeps Morgan's big strikes at bay, she should walk out with a unanimous decision win.