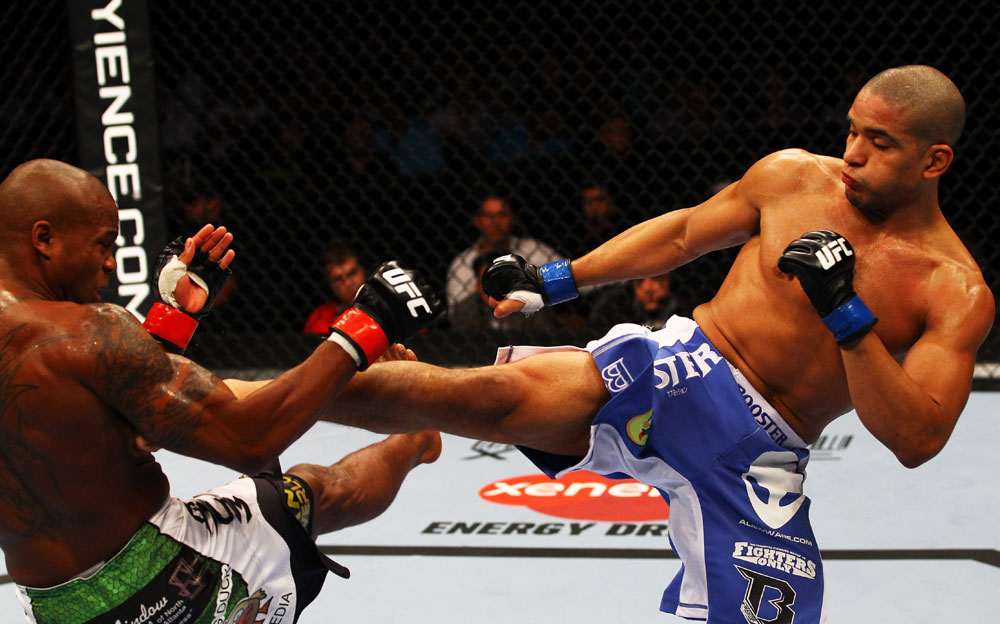 The Ultimate Fighter finale is typically a show that features several of the top names from the season of the reality show that just finished, but this Saturday’s upcoming card in Las Vegas is filled to the brim with other top names and TUF veterans as well.

The undercard to this weekend's show has a number of future contenders vying for a shot at the top ten over the next year, not to mention a few debuting names to keep an eye on as they try to make a maximum impact with their first UFC fights.

Featherweight striker Maximo Blanco will try to pick up his second win in the UFC when he faces Ultimate Fighter veteran Akira Corassani, while submission specialist Rani Yahya takes on Finnish newcomer Tom Niinimaki in a featherweight showdown.

In today's fantasy preview, we will break down some of the key fights on the undercard to get to know some of tomorrow's future stars today.

Prior to his UFC career kicking off, Maximo Blanco was a blinding flash of rage and fury inside the cage or ring, unleashing a Tasmanian devil-like offense that generally left his opponents in a heap on the canvas. Lately, however, Blanco has started to perform what might best be called 'controlled aggression,' because he's left behind those unruly whirlwind performances that often left him open to his opponent's more technical striking attacks.

Now entering his third fight in the UFC, Blanco will enter the cage against former Ultimate Fighter veteran Akira Corassani as the favorite, with the edge likely falling his way due to the striking capabilities he possesses.  In this case though, the underdog might be the one to keep an eye on.

Corassani has fought inconsistently since leaving The Ultimate Fighter due to injury, but after taking two months off with no training at all, his body healed up and now he's a reinvigorated fighter.  Training at the same gym as former UFC lightweight champion Frankie Edgar, as well as striking phenom Edson Barboza, Corassani has the boxing and the kickboxing to go toe-to-toe with Blanco. As long as he avoids any big, wild striking exchanges, Corassani could pull off a slight upset in this fight and walk away with the decision victory.

Another fight to keep an eye on for the upset-minded is the featherweight bout between grappling expert Rani Yahya and new UFC fighter Tom Niinimaki.  While the odds are ever so close on this pairing, it's Niinimaki to keep an eye on as the slight underdog to make an impressive debut.

Niinimaki comes from Finland and has a wealth of fighting experience to his credit.  At 31 years of age and with 26 professional fights, Niinimaki isn't coming to the UFC like a deer caught in the headlights.  He knows how to perform on the big stage, and he's faced some very tough competition to prove it.  He most recently defeated former UFC fighter Walel Watson by submission and that was after he beat former WEC champion Chase Beebe in May.  While the majority of Niinimaki's wins come via submission, that's probably not the best plan of attack against a fighter like Yahya, but he has other weapons in his arsenal.

Niinimaki has knockout power, but also great control on the ground when he gets the advantage there.  He won't be scared of Yahya's ground attack, but he is smart enough to know how to avoid it as well.  The Finnish fighter could do well by stuffing Yahya's takedowns, and tiring him out by the third round.  From there, expect Niinimaki to wear the Brazilian down with takedowns and a mix of superior striking to get the win.

Known as the most successful heavyweight in the storied Oklahoma State wrestling program, Jared Rosholt may have first popped up on the MMA radar in 2011 when he served as Alistair Overeem's training partner ahead of his debut fight against then champion Brock Lesnar.  Jared Rosholt is also the younger brother of former UFC middleweight Jake Rosholt and a teammate of welterweight contender Johny Hendricks.

Add all that up and you have a great pedigree for a fighter, and Rosholt has been just that so far in his career, racking up an 8-1 record overall.  This time he will face another pure athlete, as former basketball player turned fighter Walt Harris steps into the Octagon in his debut fight as well.

Harris has developed into a rising prospect in the division with fast hands that also carry dynamite when he lands against an opponent.  He definitely has the power to put Rosholt's lights out, but that only happens if he can stay off his back, and that's where the momentum shifts in this fight.  Rosholt is a world-class grappler, and while he's adapted his game to land some knockouts as well, he's best served in this fight to drag Harris to the mat and avoid the dangers of a boxing match.

Look for Rosholt to get Harris down early and often, and if he does by minute 14 or so, it may not be pretty, but it will earn him the victory when the final horn sounds.

In a classic 'striker vs. grappler' battle, former collegiate wrestler Josh Sampo takes on Muay Thai fighter Ryan Benoit in an intriguing fight at 125 pounds.  Sampo is a fighter who makes no bones about his desire to get a fight to the mat, and he's tenacious enough with his attacks to get inside and drag an opponent down.  He's got a quick double leg takedown and enough brawling ability to throw punches to get where he needs to go.

Benoit is a crafty foe, especially at 125 pounds, where he will possess some of the heaviest power strikes in the division. A Muay Thai fighter by trade, Benoit loves a good knockout, but in this fight his ability to land that shot could quickly be negated by Sampo's wrestling game.

Sampo will look to take this one to the ground, and considering that in the past few months he's picked up wins over notable names like Antonio Banuelos and Alexis Villa, he's ready for the UFC.  If he gets Benoit down, he could pull off a submission before the third round comes to a close.