"I was excited for these girls because I felt like those veterans
really, really deserved that opportunity, and I was happy to see them
get it." - TUF 18 coach Miesha Tate 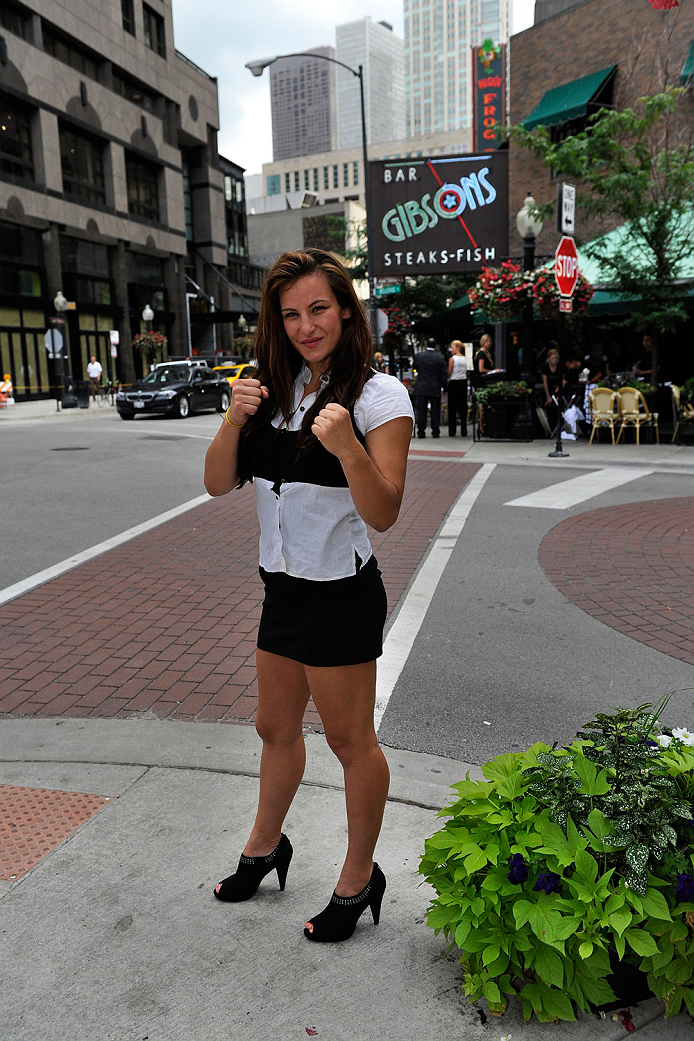 It wasn’t the way Miesha Tate had envisioned things. A win over Cat Zingano in April was going to be her ticket, not just to a rematch with UFC women’s bantamweight champion Ronda Rousey, but to a career-altering stint as a coach against “Rowdy Ronda” on season 18 of The Ultimate Fighter (which premieres tonight on FOX Sports 1 following UFC Fight Night).

Zingano’s knees put an end to those plans in the third round, sending Tate, the former Strikeforce champion, back to the drawing board, with a Fight of the Night bonus not even soothing her feelings in the slightest.

“It was a weird series of emotions,” said the 27-year-old from Washington. “I was bummed out after I lost, but I had some really quality friends and family that had traveled down to Vegas to support me, win or lose, and they really helped pick my spirits up and I put what happened on the backburner and didn’t really process it. But after everybody went home, I actually got really depressed almost and anxious. It was the first moment that I was by myself that I started to freak out, and I realized exactly what happened and I lost it. I immediately started texting (UFC matchmaker) Sean Shelby, ‘you have to get me another fight right now; I need to know there’s another fight on the horizon or I’m gonna freak out.’”

Shelby found Tate a spot on July’s UFC on FOX card against Liz Carmouche, but then fate would alter things once more for the veteran fighter. Cat Zingano suffered a knee injury that needed surgery and wouldn’t be able to coach on TUF 18. Tate was the obvious choice to get that spot and she did.

So with everything working out in the end, Tate is all smiles these days, and rightfully so. She has her rematch with Rousey in December, she will be in the nation’s living rooms every Wednesday night, and she also gets to make history as the first female coach in TUF history. The bad part? Maybe six weeks of taping with Rousey and a lengthy media tour that put them in the same room with other constantly.

“It’s one of those things that kinda gets old after a while, but I’m happy about it because it loses its effect on me,” she said of the dealings with her rival on set and on the road. “The fans and media love the drama, but because I’ve had to be around her so consistently and so often, it just doesn’t bother me as much as it used to. I used to get so emotional and so upset, and I couldn’t stand being around her and it just drove me crazy. But now it’s just like, whatever, Ronda’s being Ronda again. (Laughs) She’s flipping me off again, of course, what else is she gonna do?”

And while there is an obvious focus on the rivalry between the two bantamweights, TUF 18 will garner plenty of attention for the inclusion of female fighters in the tournament for the first time ever, many of whom are peers of Tate, a pioneer of the sport herself.

“I was excited for these girls because I felt like those veterans really, really deserved that opportunity, and I was happy to see them get it,” she said. “They were a big part of the reason why I’m where I am today, just by inspiring me as I watched their fights. And they weren’t getting exposure when they were fighting for pennies on the dollar, and they were doing it for the love of the sport, as was I. I thought they were great athletes and I was really inspired by them, and they helped me to get to where I am today by being who they are. So the fact that I was potentially coaching over them, it didn’t really cross my mind that way. I was just more excited that these girls were finally getting this opportunity.”

In December, Tate gets her own opportunity, to meet Rousey a second time, even the score, and become a UFC champion. And the only thing she has to do until then is survive more talk about someone she’s kind of tired of talking about.

“The toughest part is the constant mental grind,” she said. “I’m constantly reminded of the fight and our dislike for each other. We don’t like each other, so just imagine that there’s someone that you really, really don’t like, like a bully you had in middle school. Imagine having that thrown in your face every single day. There’s not a day that goes by that I don’t think about Ronda Rousey.”