Our episode starts inside the Team Jones locker room, where spirits are high after Josh Samman’s big win. Bubba’s shot at the wildcard spot is brought up again, but Bubba’s trying to not to get his hopes up, worried that another guy on the team could snatch it away from him. Despite their recent loss, Team Sonnen’s mood still rides high. Everyone on that team is confident about the upcoming fight between Jimmy Quinlan and Clint Hester. Jimmy even says that Clint was his first choice for opponents. 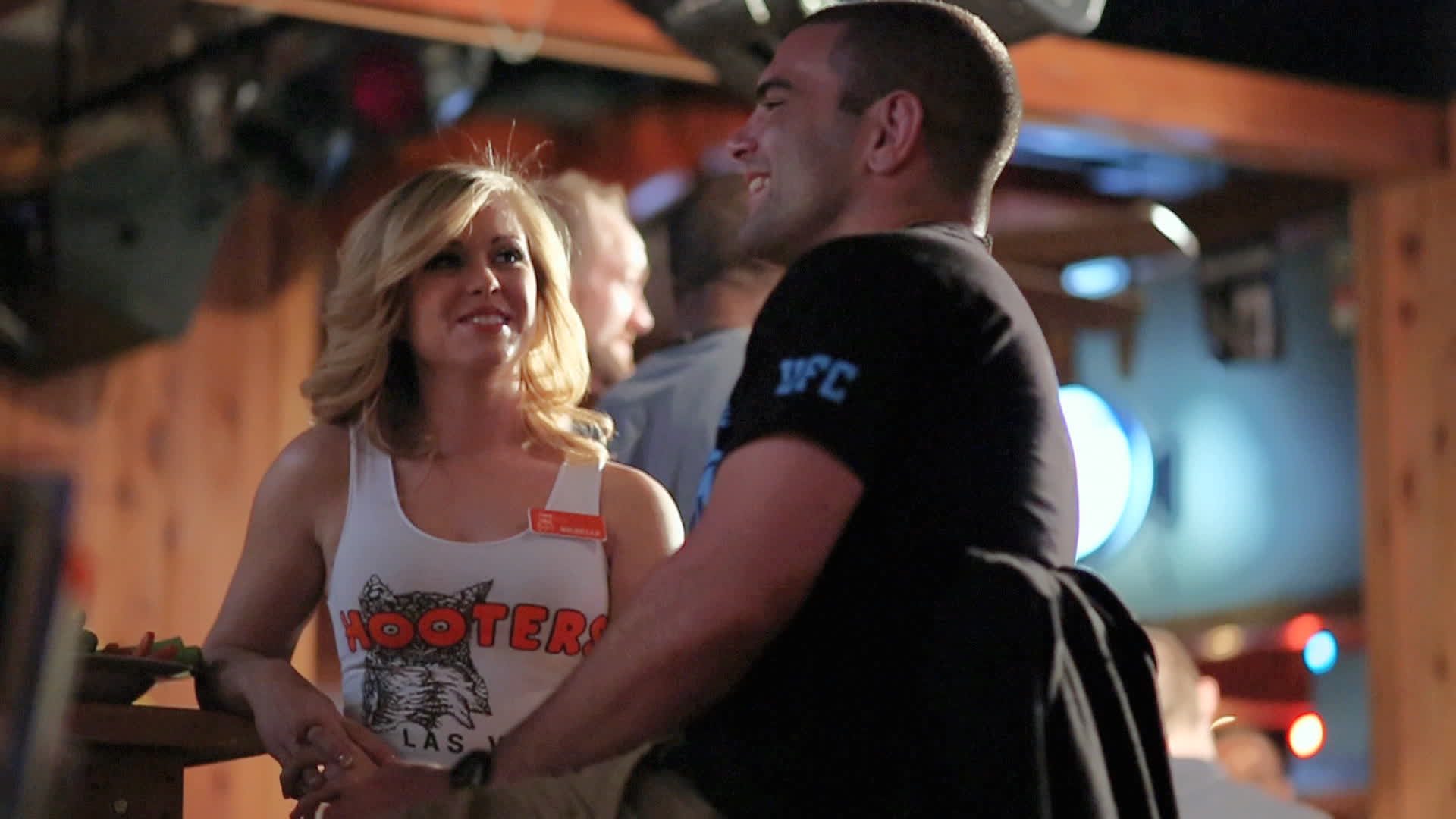 There’s a quick change of pace and we see Hooters (the restaurant that is). Like a child at Disneyland, there’s no way MMA fighters enjoying wings and waitresses in tight tank tops could have a bad time, right? Wrong. Despite Gilbert Smith’s best attempts at entertainment, Uriah Hall will have none of it. As everyone gathers for a group picture with the Hooters girls, TUF’s most dangerous man refuses to participate. He sits at a table alone and ignores the repeated requests to join. Collin Hart accuses Uriah of being self-righteous and calls him “a jerk.” This just proves that the only thing more vicious than Hart’s hands are his insults.

Back at the house Josh Samman’s left leg is giving him trouble. While most fighters would probably try to “tough it out,” Samman knows better. Remembering a torn muscle and blood clot that almost cost him is entire leg (which he recounted last week) he starts to worry. Not willing to risk things this time around, he goes to the Emergency Room to make sure he doesn’t have another blood clot. As he nervously waits, the doctor comes into the room and delivers some good news -- the test results have come back negative. 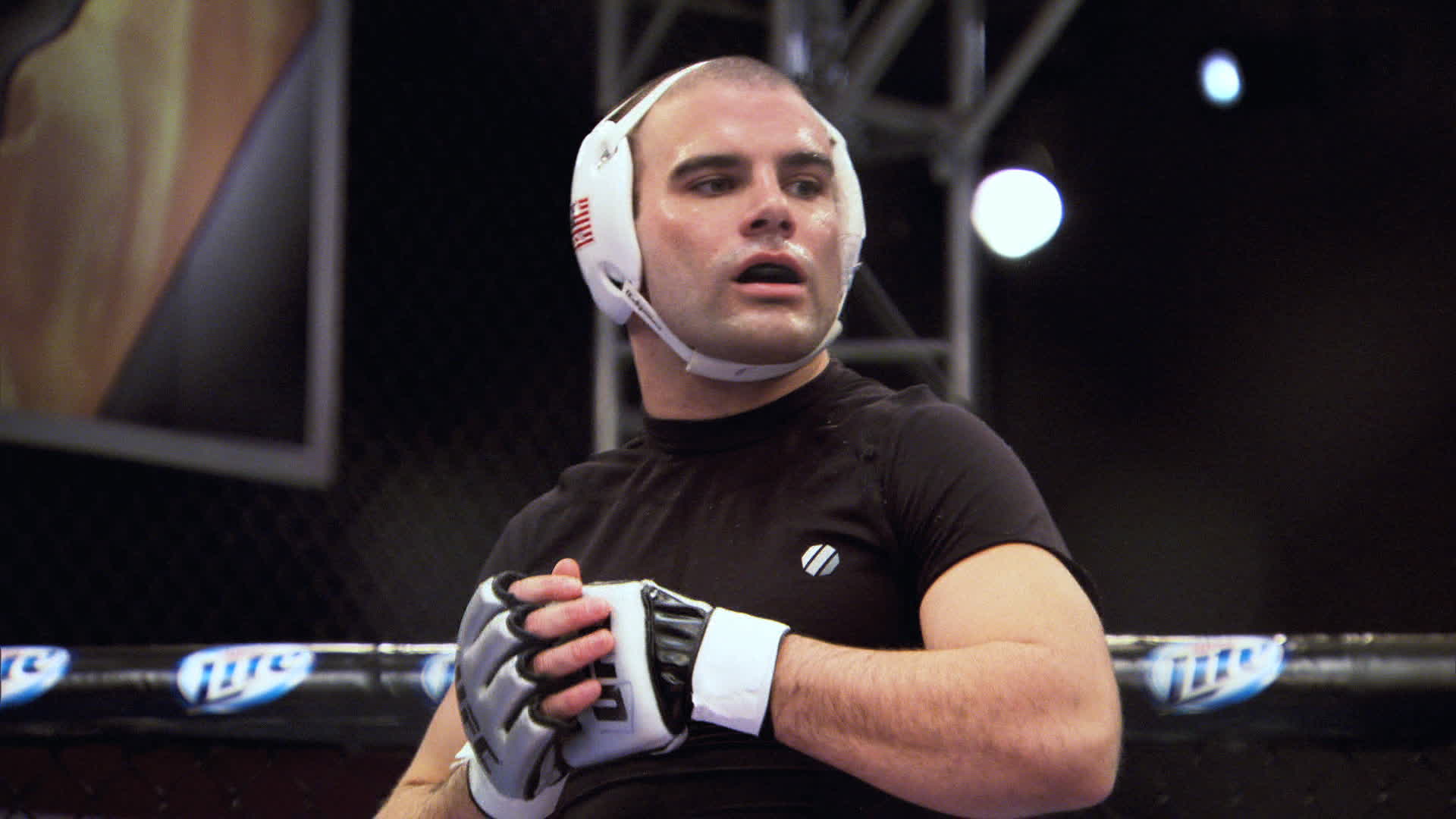 Cut to Team Sonnen’s practice session and we learn more about Jimmy Quinlan’s life growing up in a small town in Massachusettes and his career as a police officer. Coach Sonnen again raises questions on the matchup choice. He can’t believe that Jon Jones choose Jimmy as Clint Hester’s opponent. He adds, “If Jimmy gets any opponent on the ground, he’s a big problem.” Chael them gives the team a pep talk, “because I need them to know I care.”

We transition to Team Jones’ training session and hear the Clint Hester story. Growing up outside of Atlanta, he was the gentle giant who protected other kids who were picked on by bullies. I think we all wish we had a guy like Clint in our group during those awkward teenage years. Initially a boxer, his gym closed down. Unable to find a viable replacement, he found an MMA gym and decided to change combat sports. 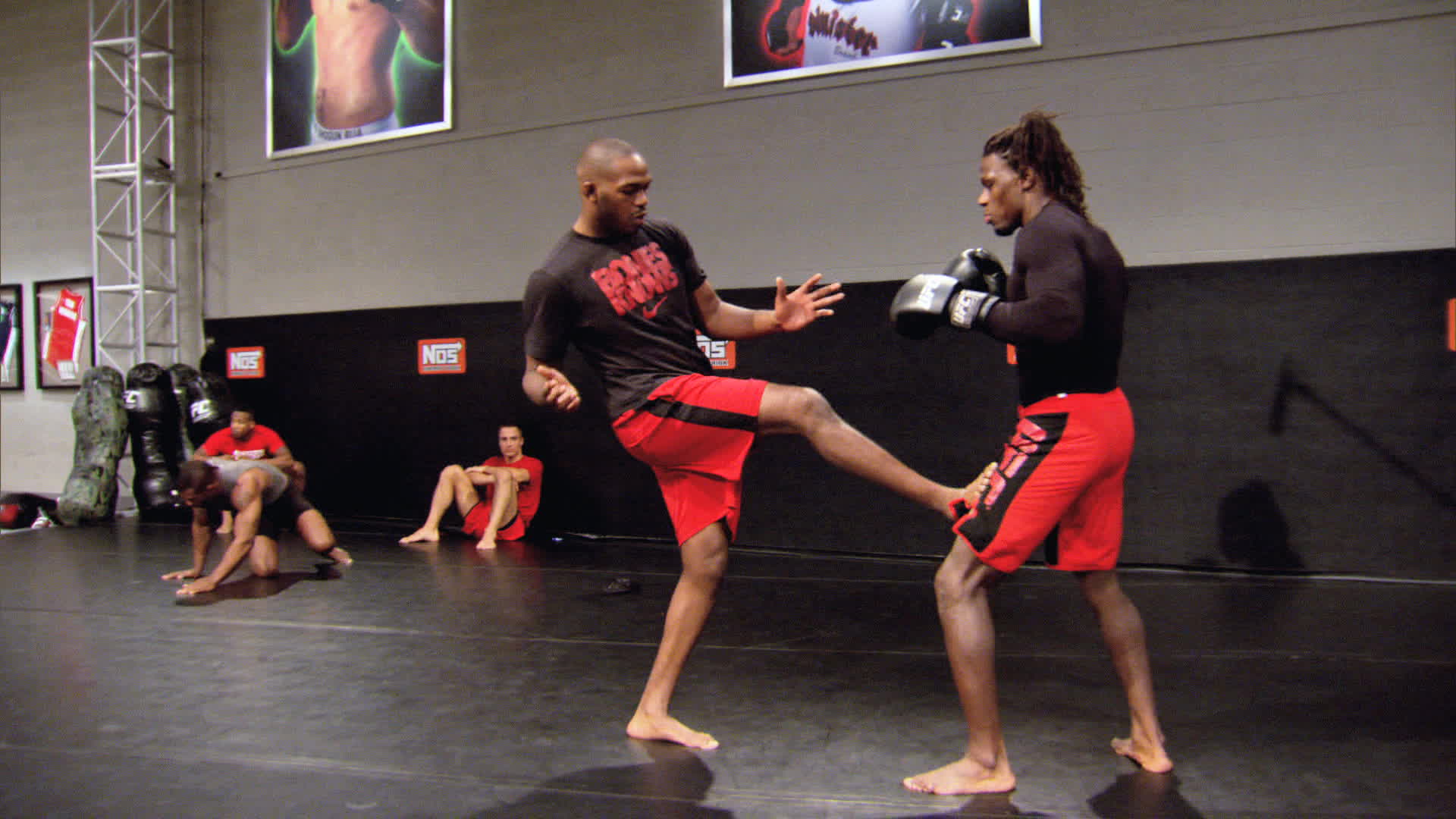 Coach Jones works on Clint’s striking with him, emphasizing some lateral strikes to the legs. He’s a big fan of Clint’s striking ability as well as Hester’s ability to implement the techniques he’s shown right away. On the downside, though, Bones worries about Clint winding up on his back during the the fight and adds, “I think he needs a little more cardio.”

As we go through the weigh-in and more fight preparations, other housemates offer their opinions. Dylan Andrews says, “Jimmy’s never been in the cage with an animal like Clint.” Uriah Hall sets the stage for the next edition of Man vs. Beast when he remarks, “Jimmy could take down a horse.” We also see Clint and Jimmy interacting in the house on fight day. They joke around a little bit, and Clint calls his opponent “unreadable.” Jimmy doesn’t say much about Clint, but feels compelled to share the specifics of his breakfast. (For those interested, it’s six hard boiled eggs, oatmeal and coffee. We never find out whether he buys organic eggs because it’s fight time.)

FIGHT TIME
As the opening bell rings, Jimmy wastes no time going in for the takedown. Clint stops it initially, but Jimmy powers through and slams him down. Jimmy moves to side mount, but Clint soon escapes and climbs to his feet. They two clinch against the cage and Jimmy scores another quick takedown, but he’s again unable to hold Clint. Back on his feet, Clint attempts a guillotine choke. He doesn’t earn the submission, but uses the choke to force Jimmy against the cage, 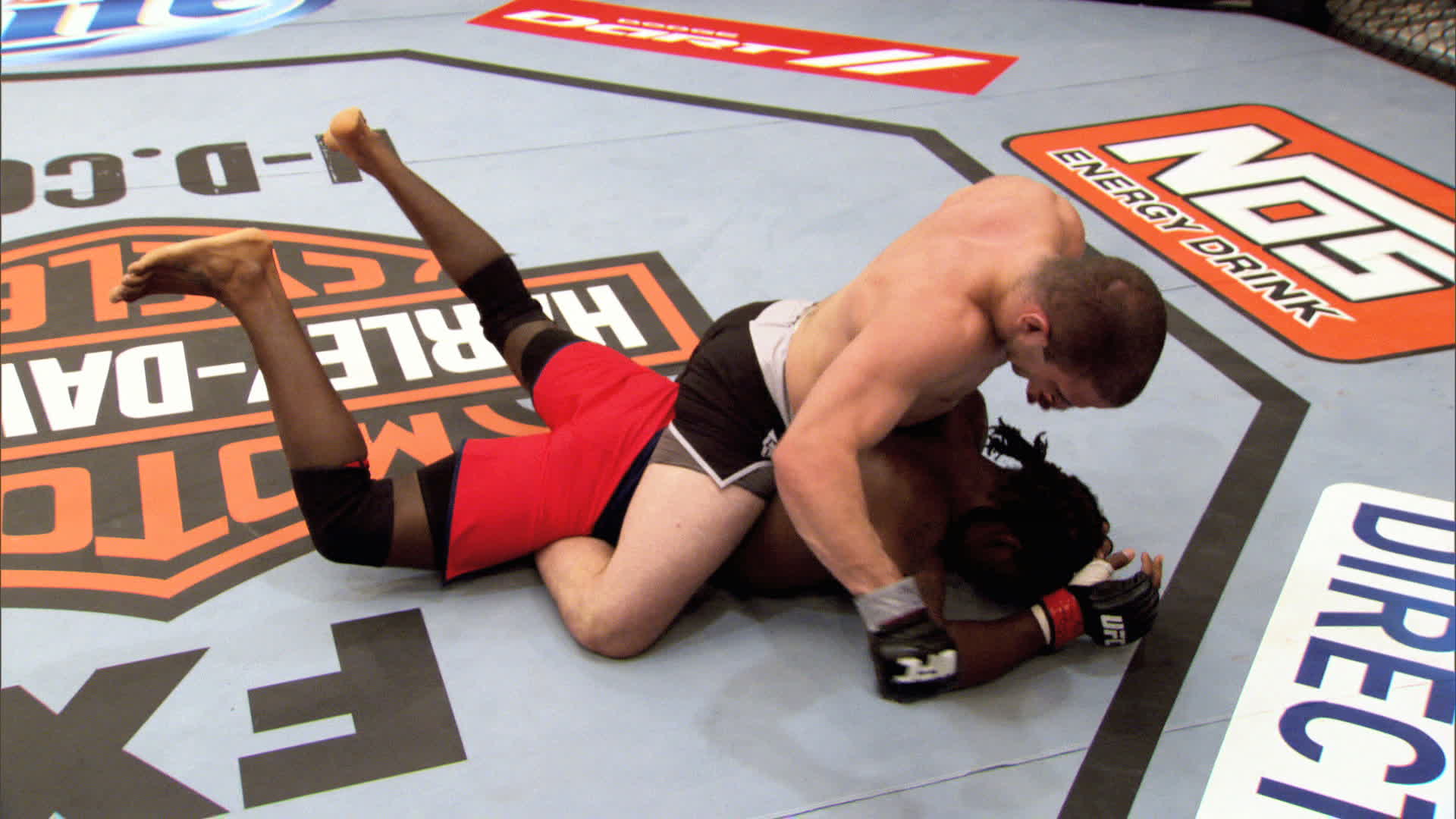 where he throws some knees and punches. These strikes find their mark and give Jimmy some added impetus to bring the fight back to the mat. Clint fights off the takedown attempt for a while (delivering some hard body punches in the meantime), but Jimmy is relentless. He continually puts Clint on the mat and the round ends with Jimmy Quinlan in the dominant position.

The second round begins with Clint bizarrely attempting a takedown of his own. He doesn’t come close and even exposes his neck for a guillotine attempt. Clint pulls his head out, but it’s all the opening Jimmy needs to bring things back to the mat. This time Jimmy finally advances his position, briefly takes Clint’s back and soon transitions to full mount. Clint exposes his back again, and this time Jimmy stays put. He throws some punches to loosen Clint up, locks in the rear-naked choke and secures the submission victory.

In the locker room aftermath, Jimmy looks like he barely has scratch. He informs the other guys that looks can be deceiving and that he feels bruises all over his head. Other than a couple bumps, he’s excited to say that he took down the #1 pick. Meanwhile on the Team Jones side, Clint hopes that he’ll be able to lock up that wildcard spot. Also, Chael Sonnen thinks now is the 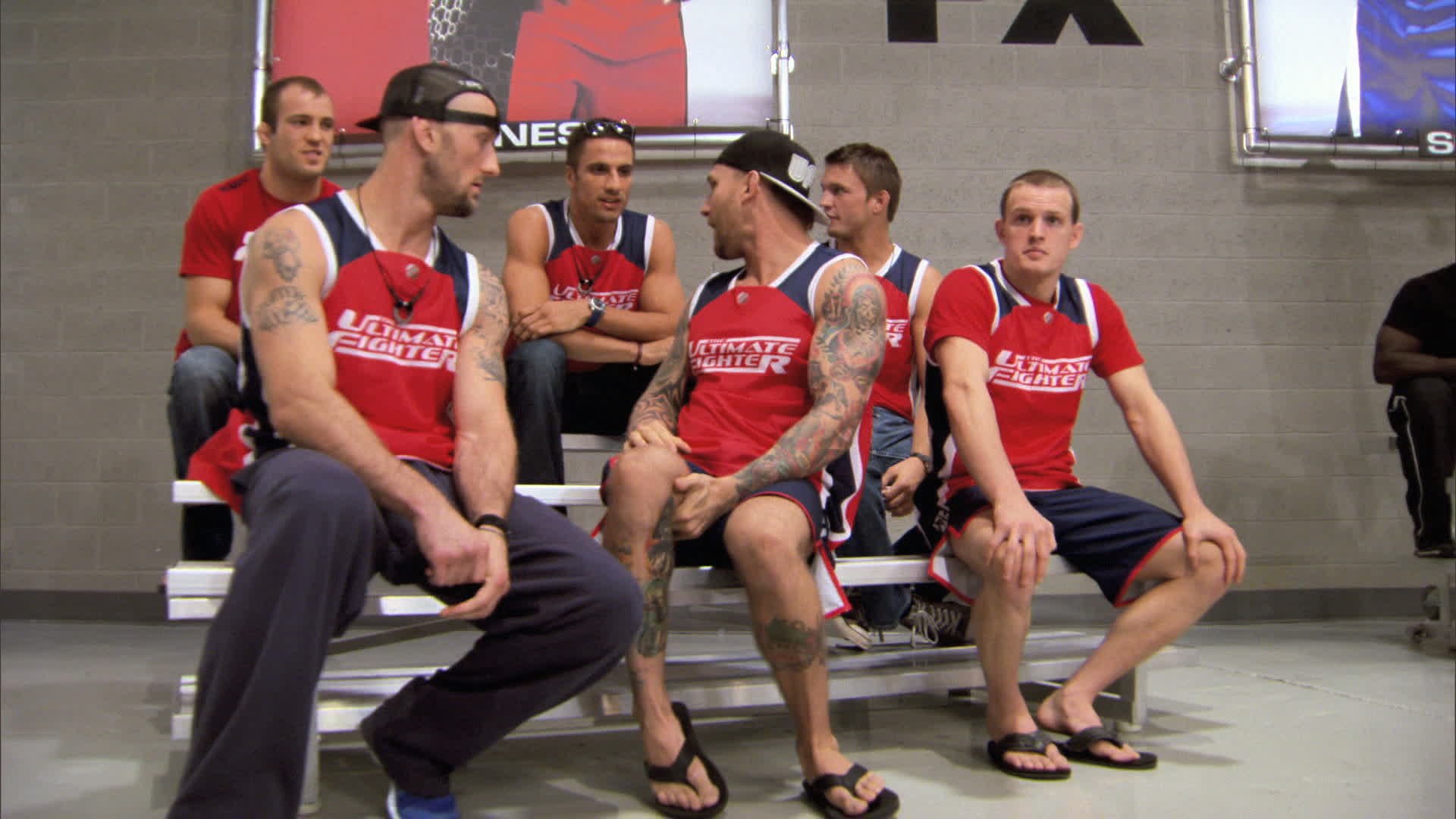 appropriate time to remind Jon Jones about their bowling bet from last week and gives Jon a Team Sonnen jersey to wear. The champ is none too amused. The coaches have been fairly polite so far this season, but is that going to end?

It’s time for the fight announcement and by default (as Chael puts it) it will be Dylan Andrews and Zak Cummings. Most people remember Dylan as the last person chosen, but Zak knows him as “the nicest guy I’ve ever met.”

The episode ends with a sneak peek into next week. Who wins the coaches challenge? What’s Dana White’s surprise? Does Uriah Hall make an “I’m sorry” macaroni heart to apolgize to the entire house? Find out this and more on The Ultimate Fighter!