The episode opens with the coaches' take on the impending Bubba McDaniel vs. Kelvin Gastelum match. Jon Jones believes that Kelvin is the weakest link on Team Sonnen and that Bubba will win this fight anywhere. Chael Sonnen concedes that Bubba is the favorite, but thinks that conditioning will be on their side. Despite that perceived advantage, Chael calls in some backup and has Ronda Rousey call Kelvin to give him more incentive. She promises that if he wins, she’ll come out to Vegas and train with them. 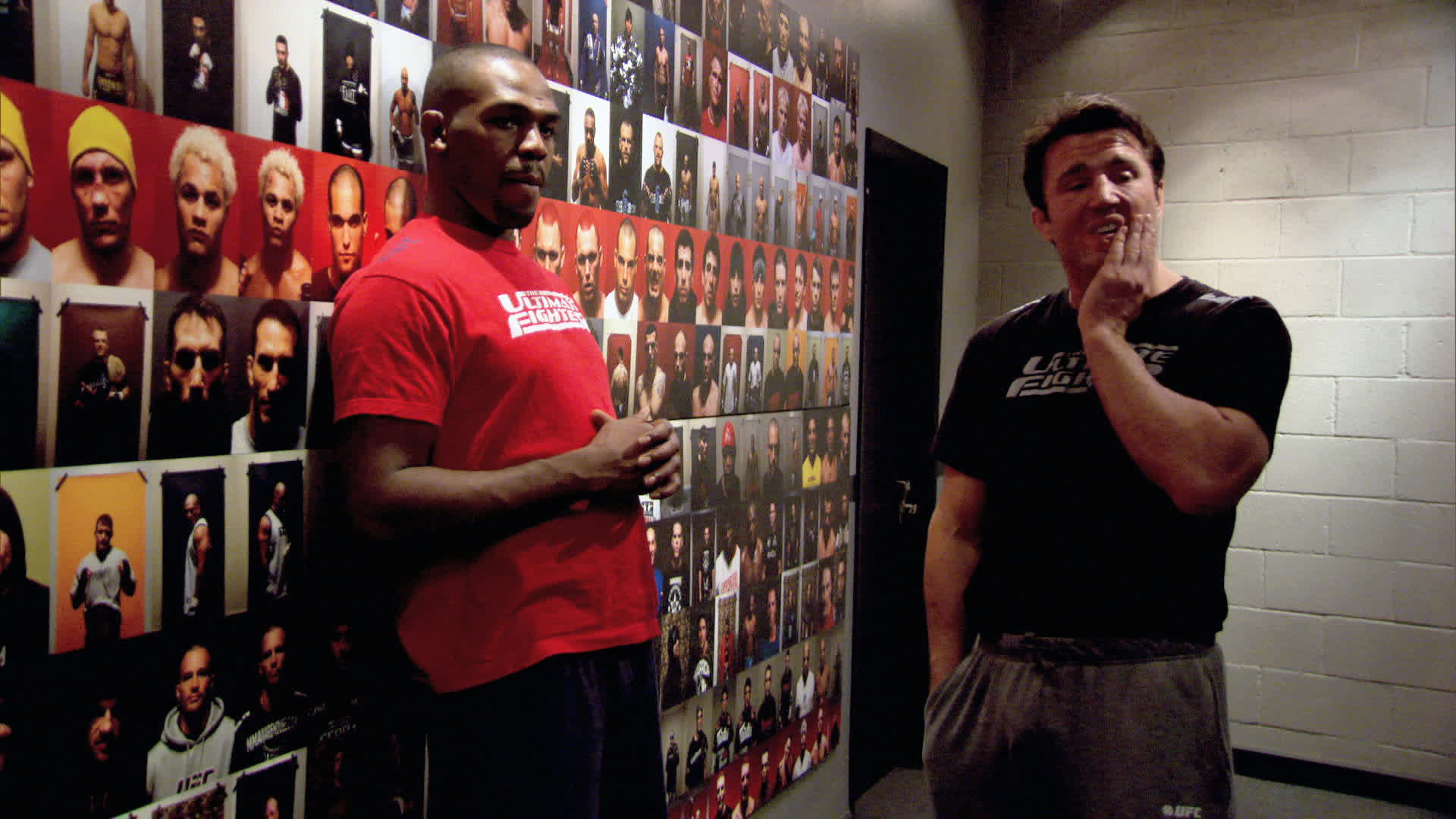 So far this season, the interactions between the coaches have been surprisingly jovial. Jones admits that he likes to remain aloof from his opponents and doesn’t enjoy talking to them, but acknowledges that the two see each other so much that he can’t really stop it. As Jones and Sonnen make small talk in the hallway, Luke Barnatt puts Bubba on blast. Given the experience gap between Kelvin and Bubba, he calls it “cheap shot” for Bubba to choose such a raw opponent. He predicts that karma will side with Kelvin and he’ll score the KO upset.

Back at the house, Chael Sonnen and some of the other assistant coaches stop by to play charades. Gilbert Smith is wearing his casual camouflage briefs...and nothing else. As the guys inside the house are enjoying the classic pastime of the habitually bored, Bubba sits in front of the fire alone and tells us his story. “I was that kid that shouldn’t be alive.” Without going into much detail, Bubba states that throughout his life, he and the municipal and/or federal laws have not always agreed on right and wrong.

From Bubba's tale of legal gray areas, we transition to the life of Kelvin Gastelum, whose major source of inspiration comes from his mother. She raised Kelvin and his sister all on her own with modest means. Besides fighting for his mom to make her proud, he’s fighting for other kids who find themselves in his position. “I come from poverty, and with enough hard work and discipline you can get what you want.” He feels that Bubba -- and everyone else --  is underestimating him and he’s ready to prove them wrong. 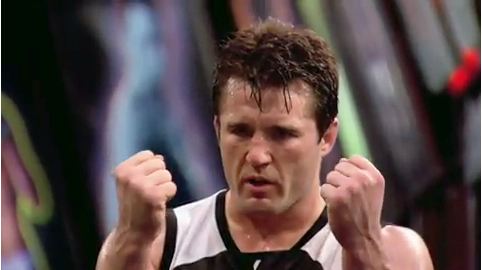 Cut to Chael Sonnen giving a pep talk to the team. He asks the crew, “What emotion will help you inside the cage?” He answers the question for them and tells them that no emotion helps you. The only thing you can count on are your two fists and actions. After making a particularly emotional appeal against emotion, Chael reverts to his old ways and rhymes words together.

While Kelvin and Bubba get ready for their fight, Josh Samman looks to avoid one. He tells the Team Jones coaching staff that if Bubba wins, he’d like to avoid the next contest. He’s banged up and goes through the rundown of his injuries. Jon Jones holds two disparate reactions to Samman’s request. On one hand he praises Josh for his openness and even compares it to his own relationship with coaches Greg Jackson and Mike Winkeljohn. Then, in the very same breath, he says that Samman is too open, and that he and the other coaches don’t appreciate fighters trying to make demands.

At the Team Jones training session, Bones talks about the (mis)match a bit more. He claims that Bubba takes it easily on the feet and that his superior BJJ takes it on the ground, too. Assistant coach Josh Wood goes even further saying the only way Bubba loses is from a lucky punch or mental mistake. Meanwhile, Mickey Rourke shows up to give a talk at Team Sonnen’s camp which can best be summed up as, “work hard and avoid crazy chicks.” 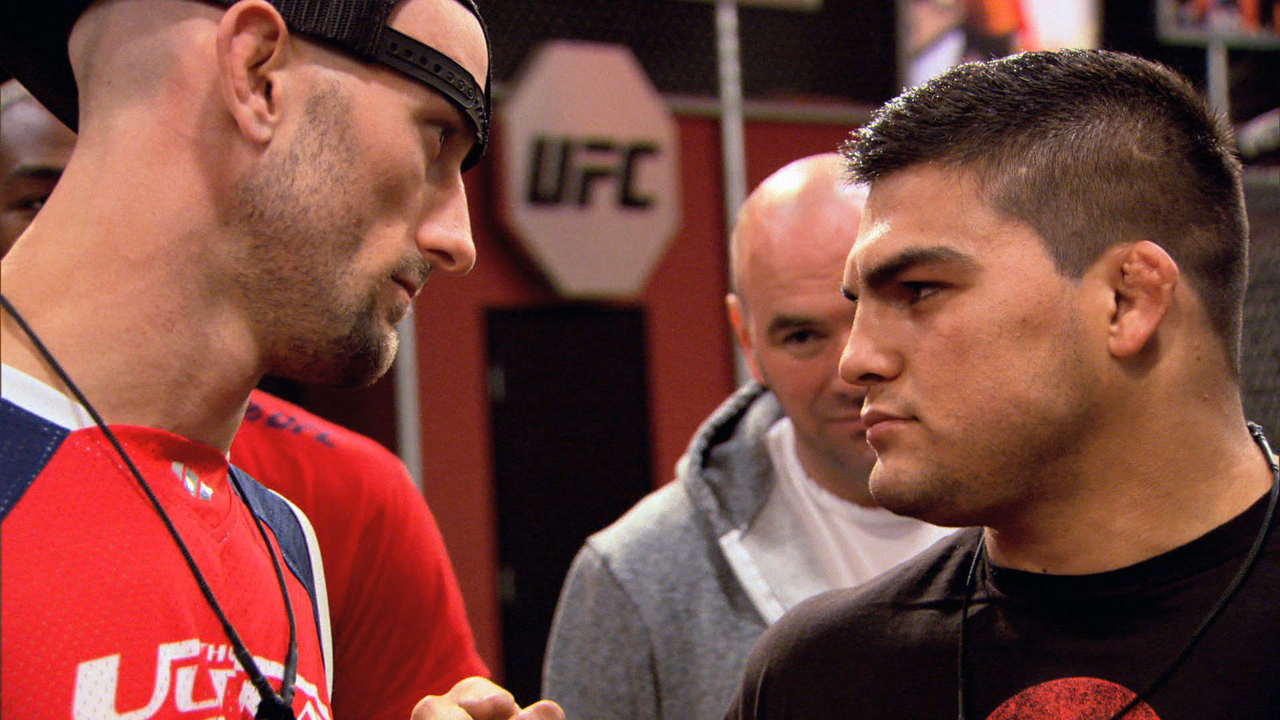 As Bubba and Kelvin weigh in on the scale, other cast mates weigh in on the fight. Adam Cella thinks that the fight is much too one-sided. Josh Samman criticizes Kelvin’s diet, but Luke Barnatt sees Kelvin winning as long as he stays aggressive. Zak Cummings echos with the warning: “don’t sleep on Kelvin.”

Fight Day
Both fighters begin the first round aggressively. Bubba rushes in, and Kelvin head tosses him on the mat. Bubba rises quickly, but Kelvin closes the distance and locks in a front headlock. Bubba pulls off a slick sweep from half guard and soon jumps to take his opponent’s back. Kelvin fights the choke and returns to his feet, but Bubba still has a waist lock secured. Kelvin rolls through and ends up in Bubba’s butterfly guard. Bubba uses an armbar attempt to roll Kelvin over and moves to mount. Kelvin gives up his back again and Bubba takes advantage of it. Again Kelvin defends and the two break apart and return to their feet. Bubba attempts a takedown, but Kelvin counters and puts Bubba on his back again. Bubba sweeps with 45 seconds left and the frantic pace continues. Kelvin runs a single to take top position, takes side mount with 10 seconds remaining and stays there until the bell.

The second round opens with Kelvin Gastelum landing a ferocious low kick. He then closes the distance and puts Bubba into a bodylock. Bubba attempts a counter throw, but Kelvin winds up on top. Gastelum transitions to side mount, but quickly loses position. Bubba has top position and his corner pleads with him to drop some elbows. Instead, he transitions for a rear naked choke attempt, which Kelvin easily shakes off. Kelvin lands a few punches as Bubba attempts another sweep. This time, though, Kelvin holds position and secures some ground and pound. When Bubba tries to sweep again, Kelvin uses a front headlock to transition to Bubba’s back. Chael shouts, “Oh my God! He might have it!” and Bubba taps with 2:22 left in the round. 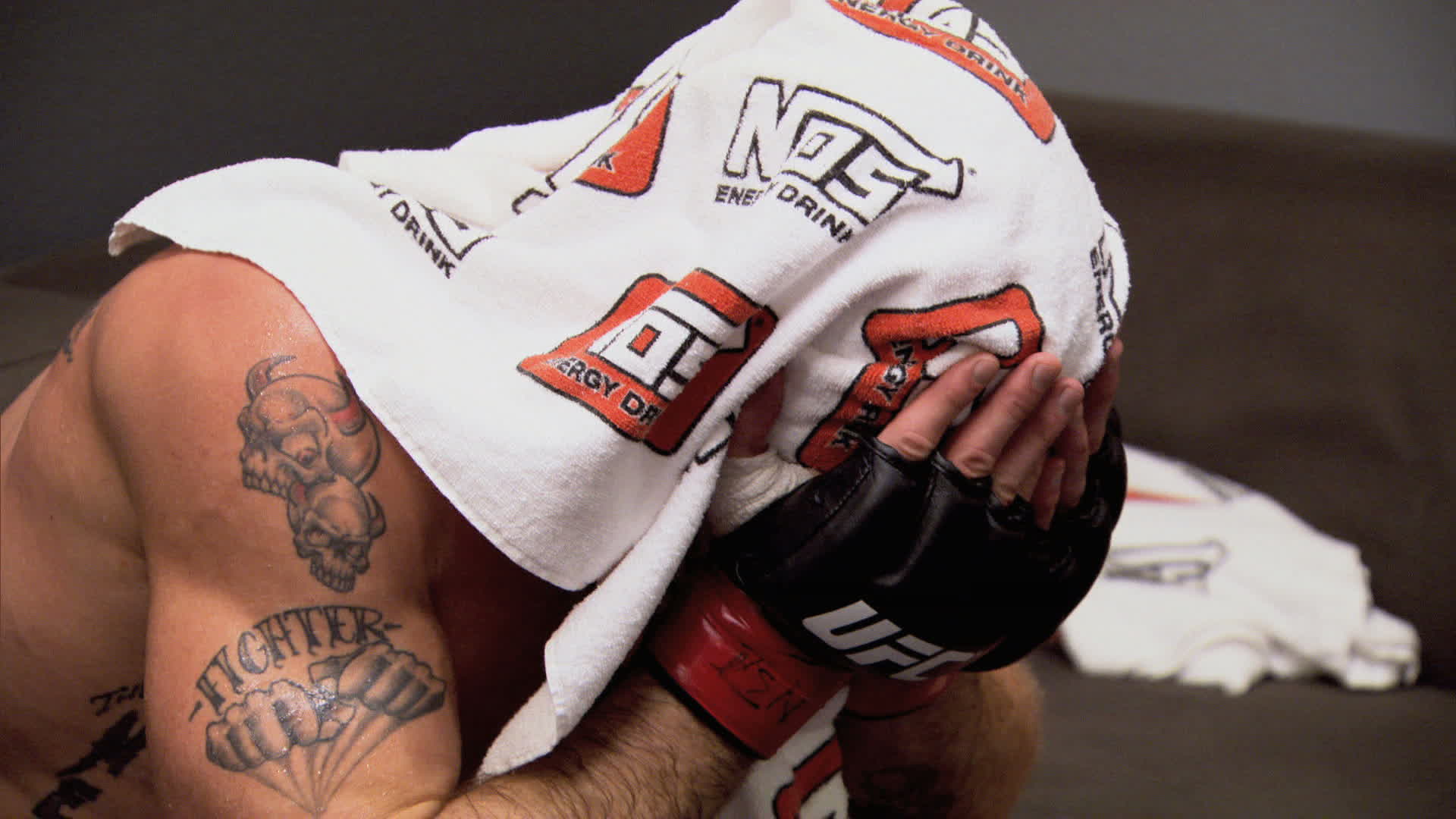 Chael calls it the best fight so far and chalks up “one more for the bad guys.” In the locker room, Jon Jones tries to pump Bubba up for his shot at the wildcard and says he’ll be better than ever. The wound is still fresh, though, and Bubba says, “I feel like a failure.” Ronda Rousey calls to congratulate Kelvin and he giggles like a nervous schoolboy.

The captain of the Dark Side announces the next fight and it will be Josh Samman vs. Tor Troeng. Chael says that they chose this fight because each has the ability to make it to the main event and they’ll just have it out next week. Josh thinks that Tor has his exact same skills, just with less athleticism.

The episode ends with a preview of next week. Will Uriah Hall alienate his teammates? Do Josh’s recurring injuries affect his performance? Can Kelvin’s paper mâché heart win Ronda over? Find out this and more next week on The Ultimate Fighter!