The episode opens up with Adam Cella, recipient of last week’s spin kick of doom, returning to the house from the hospital. Despite earning an eternal spot on MMA highlight reels, he’s in good spirits. The first thing he wants to do is congratulate Uriah Hall on his victory, and doesn’t let the fact that Hall is in the shower stop him. Hook kicks may stop him, but Cella will never let personal space deter him jfrom his dreams.

On to this week’s fight between Kevin Casey and Collin Hart. Still recovering from a cut sustained during his fight to get into the house, Kevin Casey surprised many by taking a fight so soon. He explains that this was all part of the strategy. Kevin wanted to make sure he had the ability to choose his opponent to set up the matchup he wanted. He chose Collin Hart because Hart lacks dangerous striking skills that could open up his cut. As Kevin diminishes Collin’s striking ability, Bubba belittles all of Kevin’s abilities. Collin stays above the fray, stating “I’m the quiet type.” 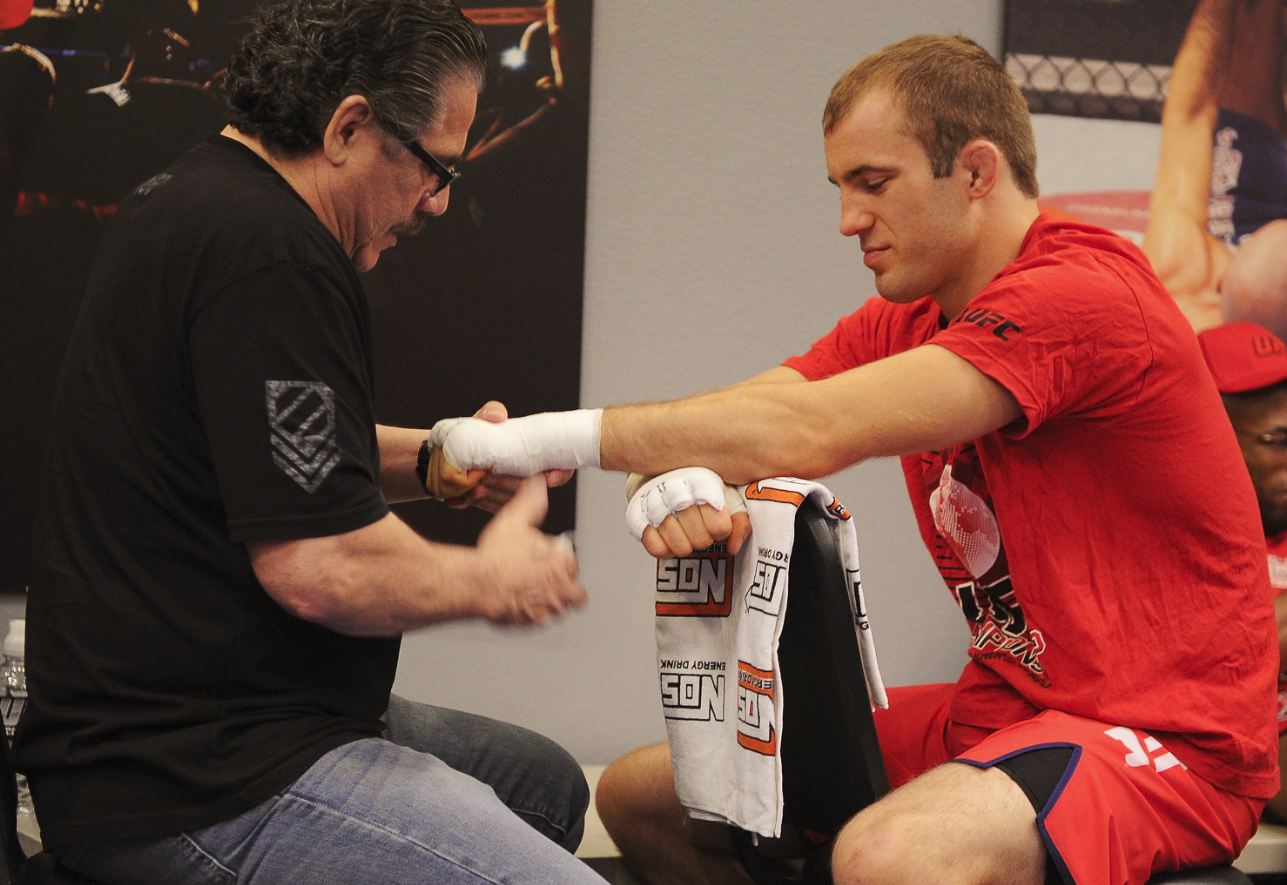 At the Team Jones training session, we learn that Bones’ strategy for winning resides in Collin’s ground game and cardio. Casey may be more muscular, but Hart’s superior athleticism will lead him to victory. We then hear the Collin Hart story. With a nickname like “The Dick,” one would assume Collin got his start at Adams College. Surprisingly, Hart was actually a victim of bullying as a kid. Never too big on team sports, Hart had his first MMA fight when he was 18 years old and has been going strong ever since.

Back at the house, the guys are talking about Kevin’s rap career. This naturally leads to a freestyle rap battle among the members of the house. Adam Cella wisely sits this one out. 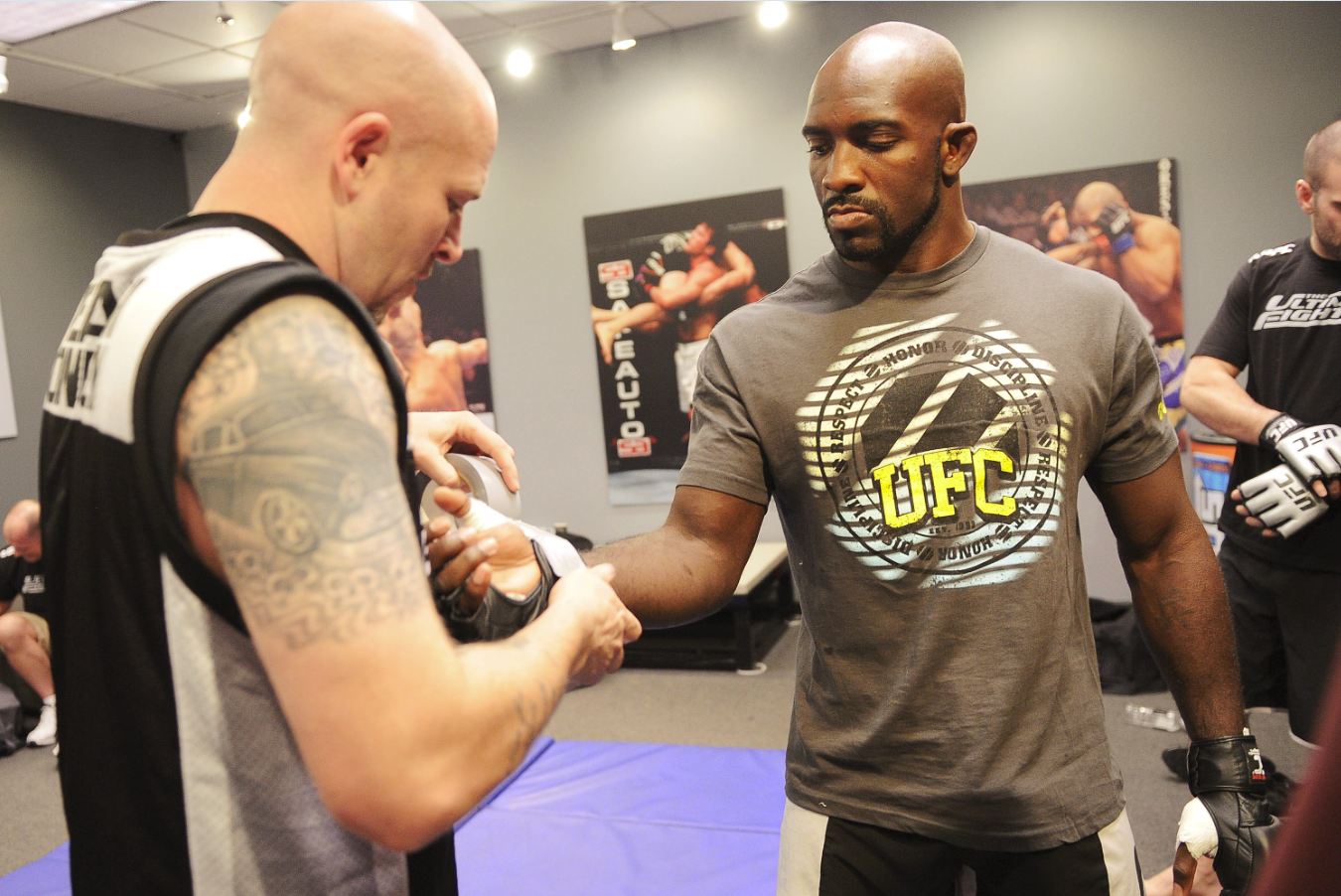 We now move to the Team Sonnen training session, where Kevin talks about his entry into the world of MMA. Involved in martial arts since a child, he took things to a new level when he became friends with Rockson Gracie. After Rockson passed away when he was in college, Kevin dedicated himself to an MMA career. Chael Sonnen sums up Hart's strategy: Kevin will utilize top control and ground and pound his way to the next round.

Back at the house, the power goes out, and we all know what that means -- prank time! Team Sonnen’s idea of a prank, though, is to run into a bedroom and throw toilet paper at their foes. Sure it’s no antiquing, but it’s something, right? Collin Hart doesn’t appreciate this because Team Sonnen has violated the house rule to not mess with each other’s sleep. Collin should have known that the TUF house is like Mad Max -- people get murdered for gasoline and there are no rules.

Collin refuses to let the “prank” go and shows his displeasure at weigh ins by giving Kevin the middle finger. It may not be the most effective means of protest, but I’m pretty sure it was Ghandi’s second option after that whole non violent resistance stuff. At weigh ins we also learn that Josh Samman would bet his house and any money he has on Collin winning the fight. Next to that, Zak Cummings’, “I don’t see Kevin losing,” lacks a certain sense of panache.

Back at the house, a few of the guys are still angry about Collin’s actions at weigh ins. Uriah confronts Collin about it and Kevin tells us that, “Older guys [like me] have to teach younger guys a lesson.” This leads us into fight day. 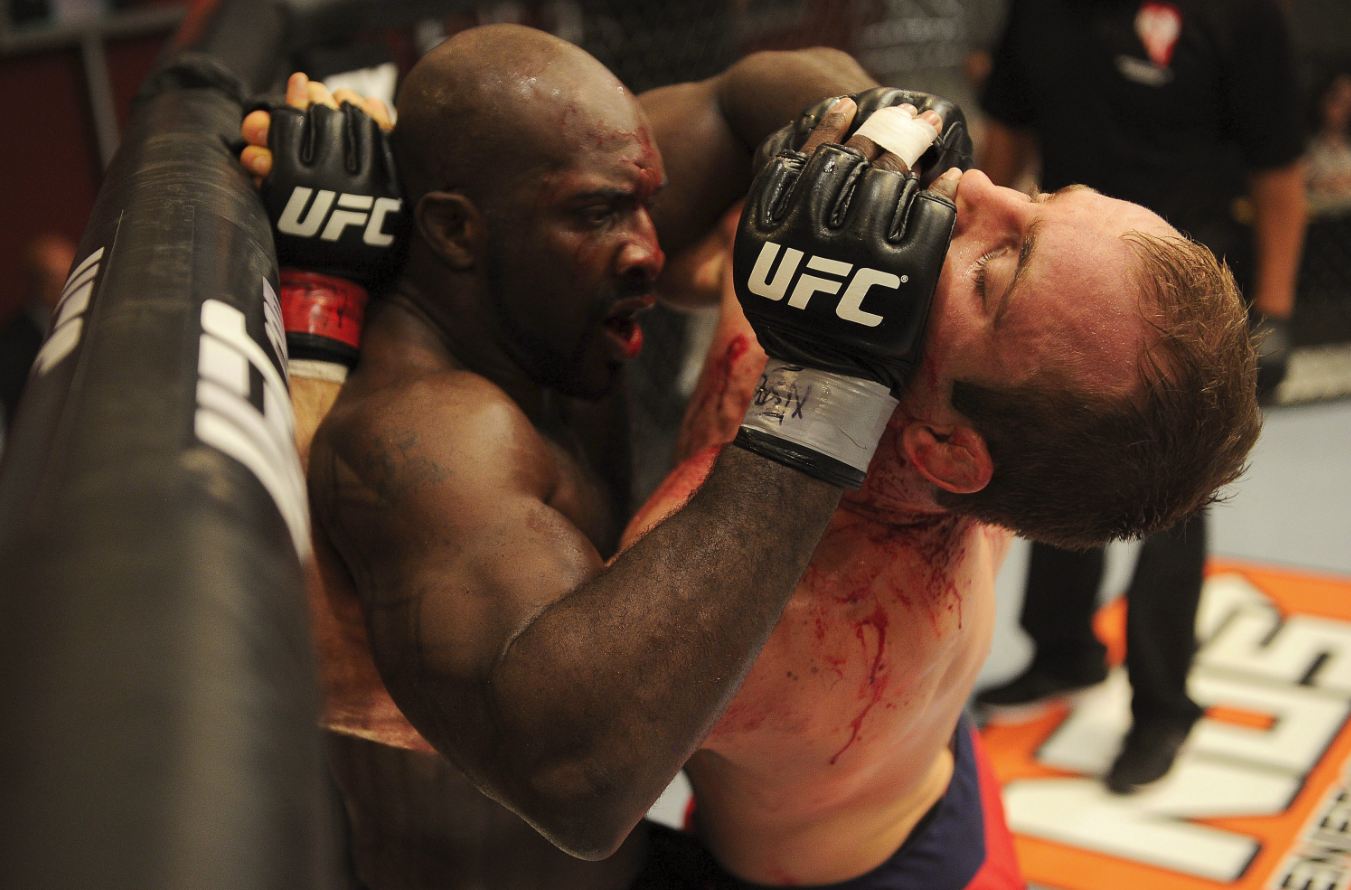 Collin sprints out the gate to begin round one. He jumps at Kevin (Jones later calls it a “ninja move”) and immediately transitions to a single-leg takedown. He easily moves to side control, but fails to do anything with it. Kevin gets his guard back and attempts a guillotine. Collin defends and the two are back on their feet. Kevin initially wins the advantage, but Collin soon backs him down and pushes Casey against the fence. The two trade knees in the clinch and Collin lands the more solid blows. With 20 seconds left in the round, Kevin breaks the tie-up and lands hooks with both fists, but Collin soon ties him back up and the round ends.

In between rounds, Kevin’s corner tells him that he needs to win the next round and that he should use some more of the punches that gave him success at the end of the first. Jones wants Collin to work the body more and tire Casey out. 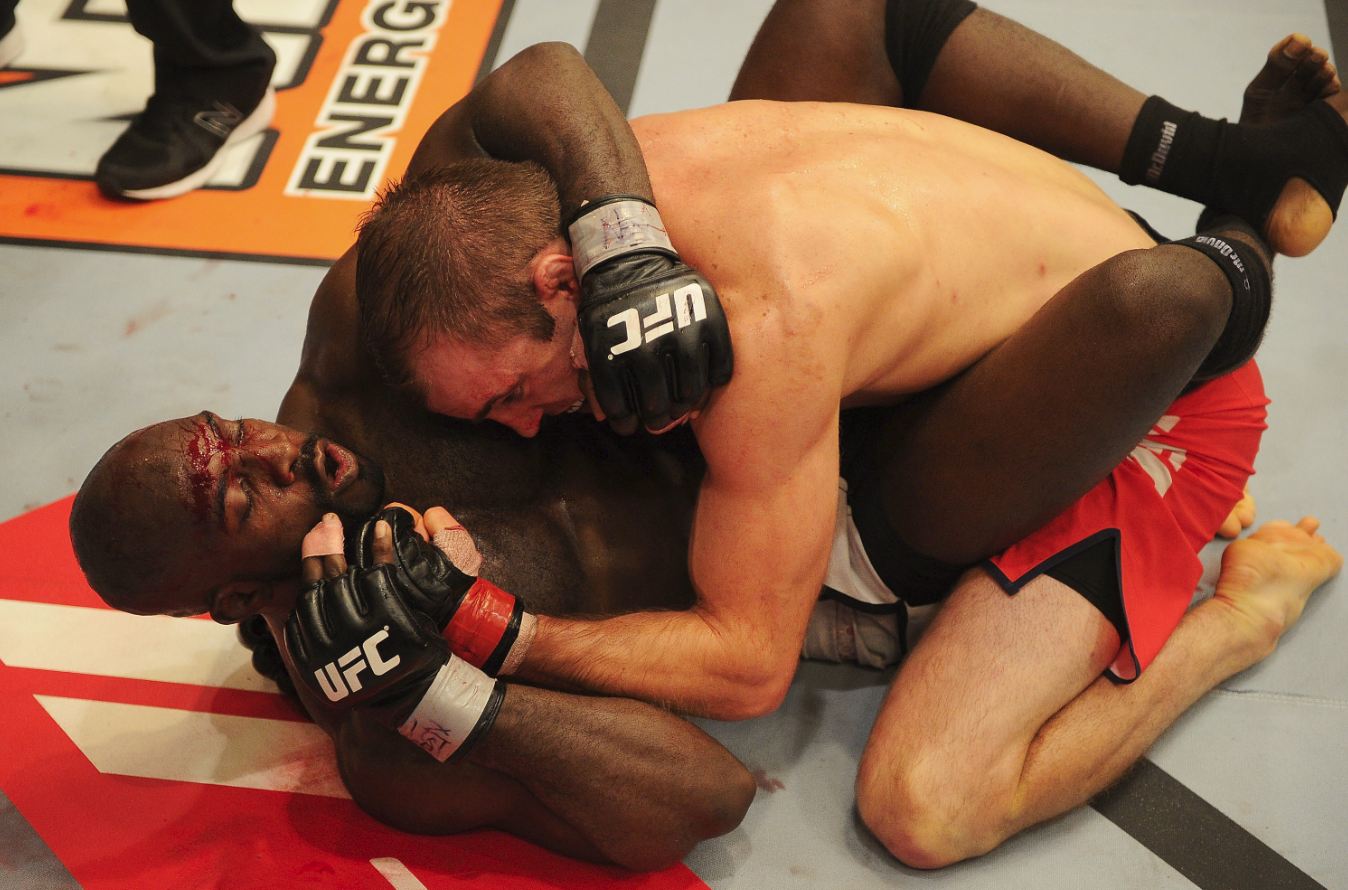 The second round begins and Kevin Casey follows orders, finding the mark with a couple of solid left crosses. Collin immediately clinches and puts Kevin -- who is now bleeding -- against the fence. Collin fails to score the outside trip, but uses the move to transition behind Kevin and take him down with a bodylock. Kevin’s cut appears to open up more as Collin moves to side mount. From this position Collin grinds Kevin down and uses short punches and elbows to batter his opponent. Kevin earns his guard back, but time is now his enemy. He continues to try to set up submissions from his back, but Collin rains down punishment as only 30 seconds remain. Collin stays in the dominant position and Kevin continues to bleed as time expires.

Back from the break, the judges all give it to Collin Hart 20-18 (was there any doubt? [well, okay, sure]). The coaches give their post-fight commentary. Chael Sonnen credits Collin’s relentless pressure with wearing Kevin out, and criticizes Kevin by saying that he “never came to fight.” Jon Jones is pleased with his fighter’s performance and says he expected Kevin to slow down as the fight progressed. Dana White says that Hart broke Casey and that Kevin “didn’t even try to win the fight.” Kevin Casey also admits that he physically wasn’t all there in the fight. Collin is upset he didn’t get the finish, but doesn’t have a lot of time to talk because he hops on a treadmill right afterward. 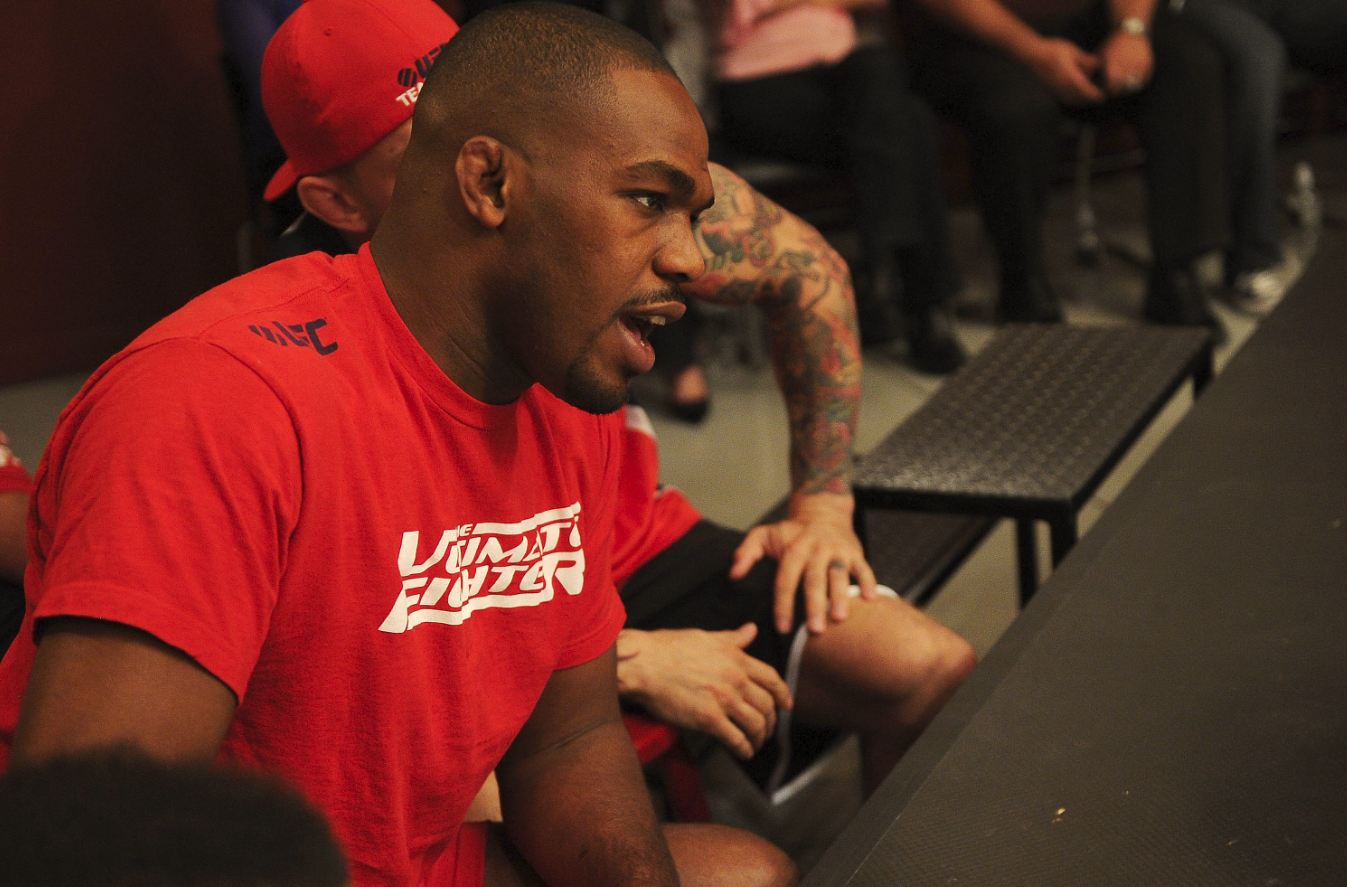 Team Jones has their first win under their belt and control is back on their side. Bubba McDaniel finally gets his chance to fight. His opponent will be the youngest man in TUF history, Kelvin Gastelum. Jon Jones believes Kelvin to be one of the weakest links on the opposing team. Chael Sonnen admits that Bubba is certainly the favorite to win the fight, but, “Kelvin is going to surprise some people.”

The episode ends with a sneak peak into next week’s episode. How does Team Sonnen react to their first loss? Can Kelvin overcome the odds? Can Chael Sonnen be any good at a game that forces him to not speak? Find out this and more next week on The Ultimate Fighter!