Weekly recaps of The Ultimate Fighter: Team Jones vs. Team Sonnen, airing Tuesdays on FX at 9 p.m. ET/PT, with re-airs on FUEL TV and UltimateFighter.com. Get the Season Pass on iTunes and UFC.tv. (Click here for international listings.)

We open our first regular episode with the guys arriving at the house after the elimination bouts. Bubba McDaniel feels like a kid again, Luke Barnatt appreciates the upgrade from his budget lifestyle and Gilbert Smith is simply awestruck. 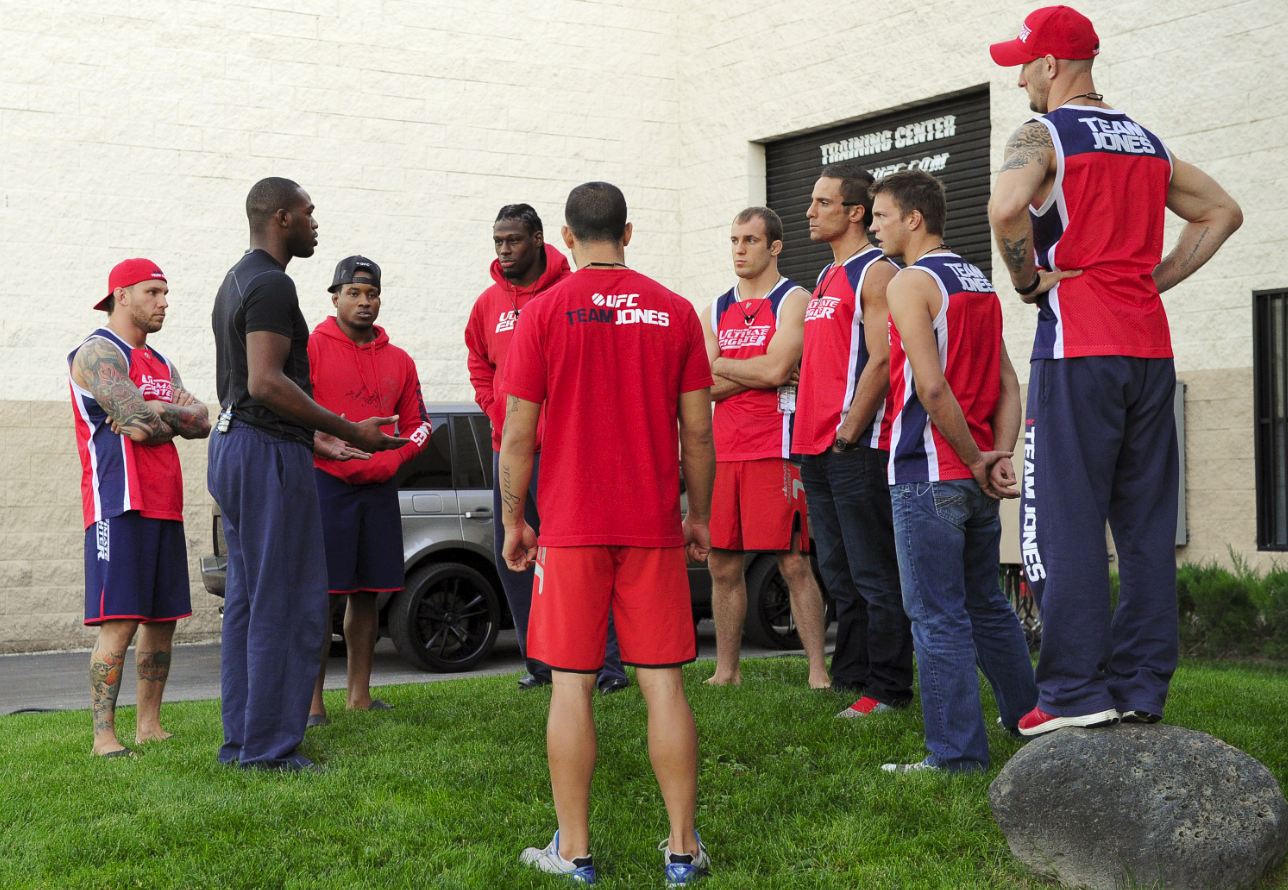 While most of the crew is just excited to be in a fancy house, Josh Samman is worried about the impending fight between Gilbert Smith and Luke Barnatt. He doesn’t believe it was a smart pick and seriously questions Gilbert’s cardio. Bubba agrees that Smith’s endurance seems to be lacking. While teammates sniping each other is nothing new, even Team Jones’ coaches have their doubts. They convene a little coaching panel and echo many of the sentiments Josh and others hold.

As for Gilbert himself, he feels that there is a lack of positive affirmation (man, if only he knew what they really thought!) and doesn’t appreciate all the criticism. It appears that the pressure of the situation is starting to get to him. Teammate Adam Cella thinks that Gilbert is mentally breaking down. So we're off to a good start.

In the Gym
Things are a bit more positive in the world of Team Sonnen side. We cut to their training session and Chael introduces us to his coaching staff. He also informs us that he’s going to be participating in every workout his team goes through. He’s doing this so he can properly understand how the guys feel physically and mentally and figures the best way is to do it himself. Jimmy Quinlan says that the team, “is vibing very well.”

While camaraderie seems to be growing on Team Sonnen, Team Jones is already hitting the skids. As Gilbert leaves the room to check his weight, Bubba tells the assistant coaches that Gilbert is a wreck and doubts he’ll be able to perform in the Octagon. When Gil returns, his teammates confront him.

Considering past TUF outbursts, you might expect Gilbert’s reaction to include bunch of swearing and yelling, “Let me bang, bro!” but that does not occur. Instead, he responds with, “I’m not the one calling the shots" -- not exactly the most convincing of denials. As the coaches listen outside the door, Jon Jones decides to walk in and take charge. He tells Gilbert that he believes in him, knows he can win this fight and he should ignore all the other noise.

Team Jones finally gets down to training. Coach Jones trains Gilbert to use his big overhand left punch to catch the taller Barnatt. As Gil starts getting in the groove and moving, a few teammates start to believe in him. Both Clint Hester and Adam Cella start to envision Gil beating Luke.

Back at the house, Chael Sonnen decides to stop by and say hello. While he may act as if he's merely popping in for a spot of tea, Chael (shockingly) has ulterior motives. He pulls Uriah Hall aside and lets him know that his biggest priority as a coach is getting Hall on to the next round. Looks like Dana and Chael both have a soft spot for Mr. Hall.

Back at Team Sonnen training, we learn a little more about #1 pick Luke Barnatt. Born to a Jehovah’s Witness mother and “hippie” father, he has family dynamics that make Honey Boo Boo’s look like a Norman Rockwell painting. Coach Sonnen doesn’t appear to be too worried about Gilbert Smith negating the 6’6” Englishman’s reach.

Meanwhile, Dana White hears about the Team Jones controversy and agrees with them. He has no idea why Jon Jones would choose this matchup. With everyone (save Jon Jones) doubting him, can Gilbert pull it off? 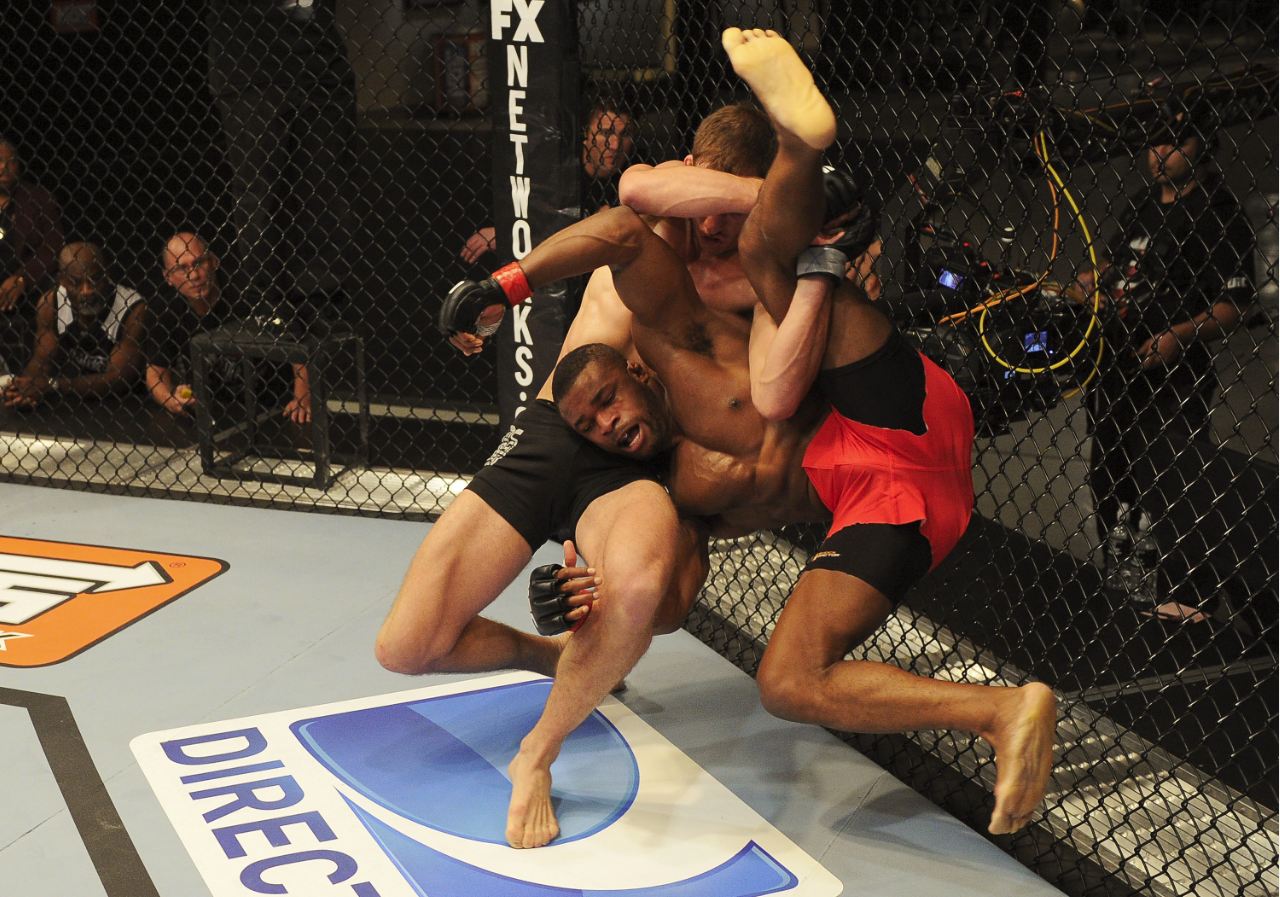 Fight Time
Round one starts off with a groin shot. Once that uncomfortableness is out of the way, the fighters get down to business. Gilbert follows his training and uses that big overhand left to  transition to a takedown attempt. He pushes Luke against the cage and then scores a single-leg. Luke immediately works his way back to his feet and scores a trip takedown of his own. Both fighters get back to their feet and clinch against the fence. Luke tries to work his knees, but Gilbert grabs one and forces him to the ground. Unable to hold him down, both fighters break up and move to the center of the cage with about 1:50 left. Gilbert quickly shoots in, but Luke winds up on top. Luke takes his back, but Gilbert reverses, scrambles and both are back against the cage with less than a minute left. After an ugly jump knee attempt from Barnatt, Gilbert closes the distance, but the round ends. 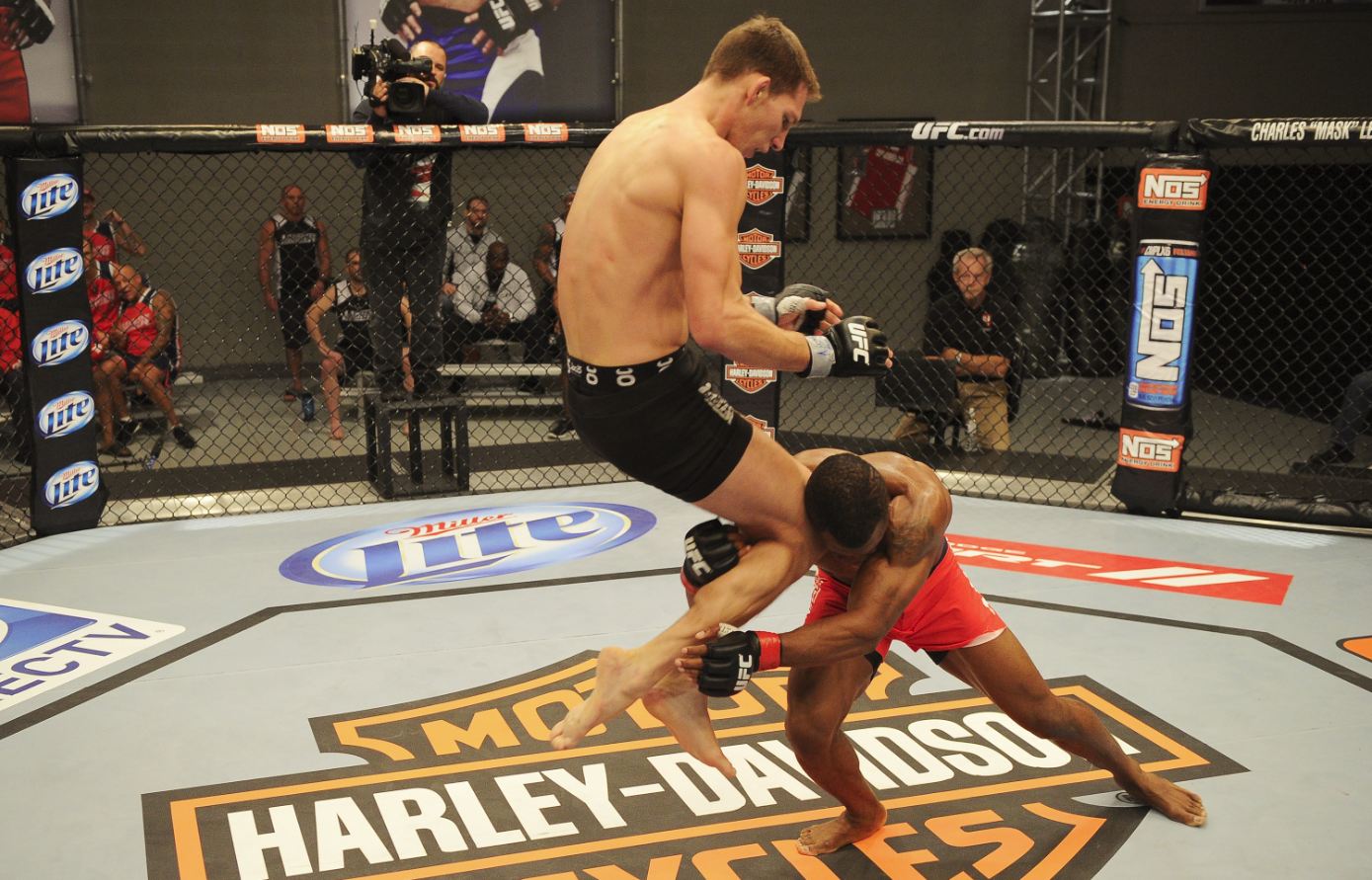 Gilbert grabs another single-leg attempt as the second round begins, but the two wind up pressed against the fence. Luke tries to scramble and winds up on his back, but Gilbert fails to hold him down. The two return to their feet and Luke answers with another outside trip takedown. He’s able to score a few punches and short elbows before they’re back standing. Gilbert tries to throw some haymakers, but his energy is gone. Remember Luke’s ugly jump knee from round one? He tries it again, and this time it lands perfectly as Gilbert rushes in for the takedown. Barnatt catches Gilbert flush and Luke scores a 2nd-round KO, Vick vs. Cruickshank-style.

Coach Jones is now eating all those nice words he mustered up for Smith. He criticizes him for letting Luke dictate the pace and adds, “Gilbert lost the fight before he even got there.” The light heavyweight champ also tests out a new T-shirt slogan when he tells his team that they have to be, “pissed off for greatness.” Josh Samman gives us the usual, “I told you so,” while Bubba McDaniel is a man of action -- not content to let Team Sonnen decide his fate, he calls out Kevin Casey in the gym after the fight, hopefully goading him into a fight next week.

It doesn’t work, and Chael announces that next weeks match will pit teacher’s pet Uriah Hall against potential victim Adam Cella. Hall tries to give some pro forma “anything can happen in a fight,” but he doesn’t seem too worried.

The show closes with a sneak peek into next week’s action, which promises one of the craziest finishes in TUF history. Does Adam Cella shock the world? Can Team Jones find some continuity? Will Mrs. Barnatt usurp June Shannon for reality TV gold? Make your predictions in the TUF Fantasy tournament and then find out next week on The Ultimate Fighter! 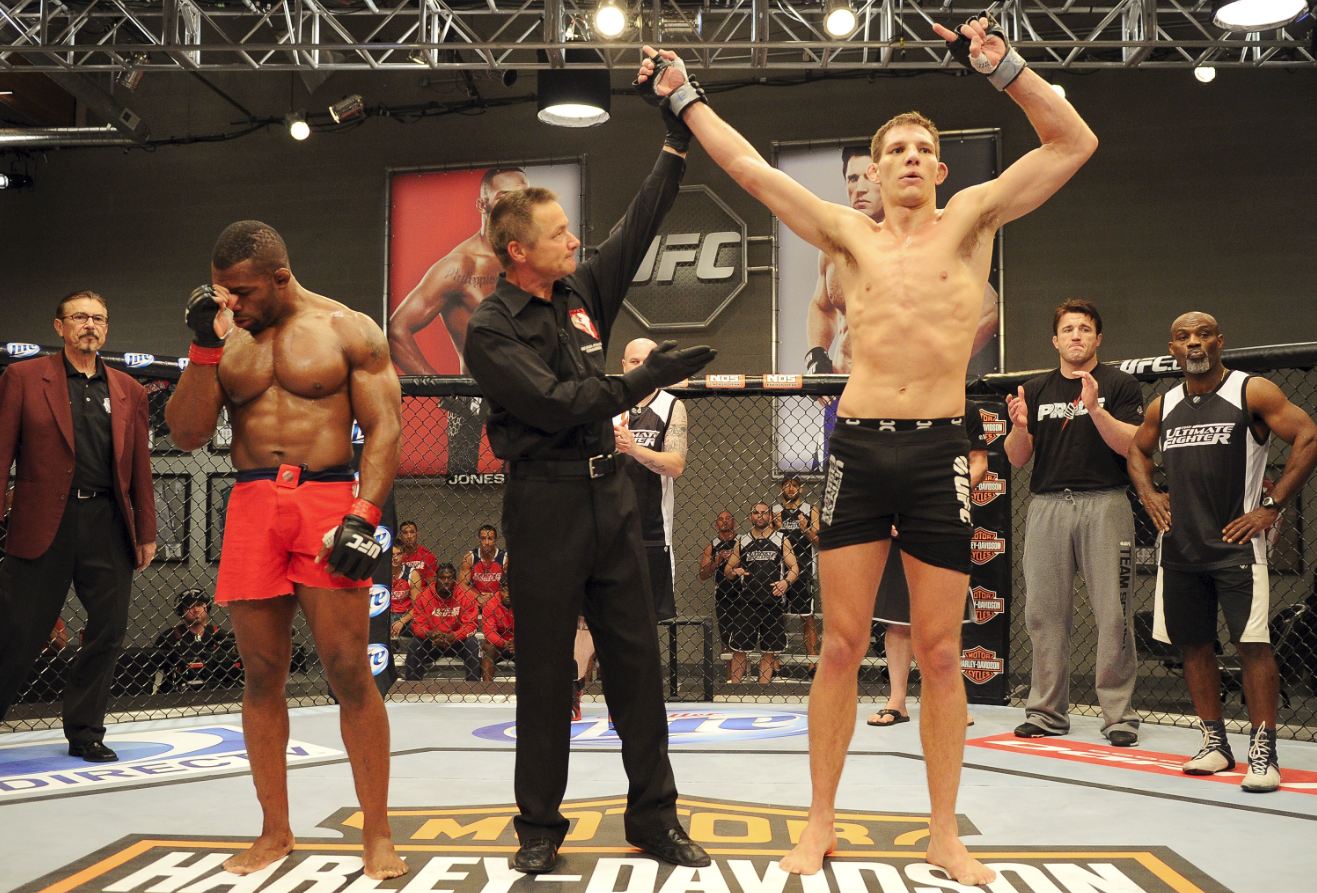