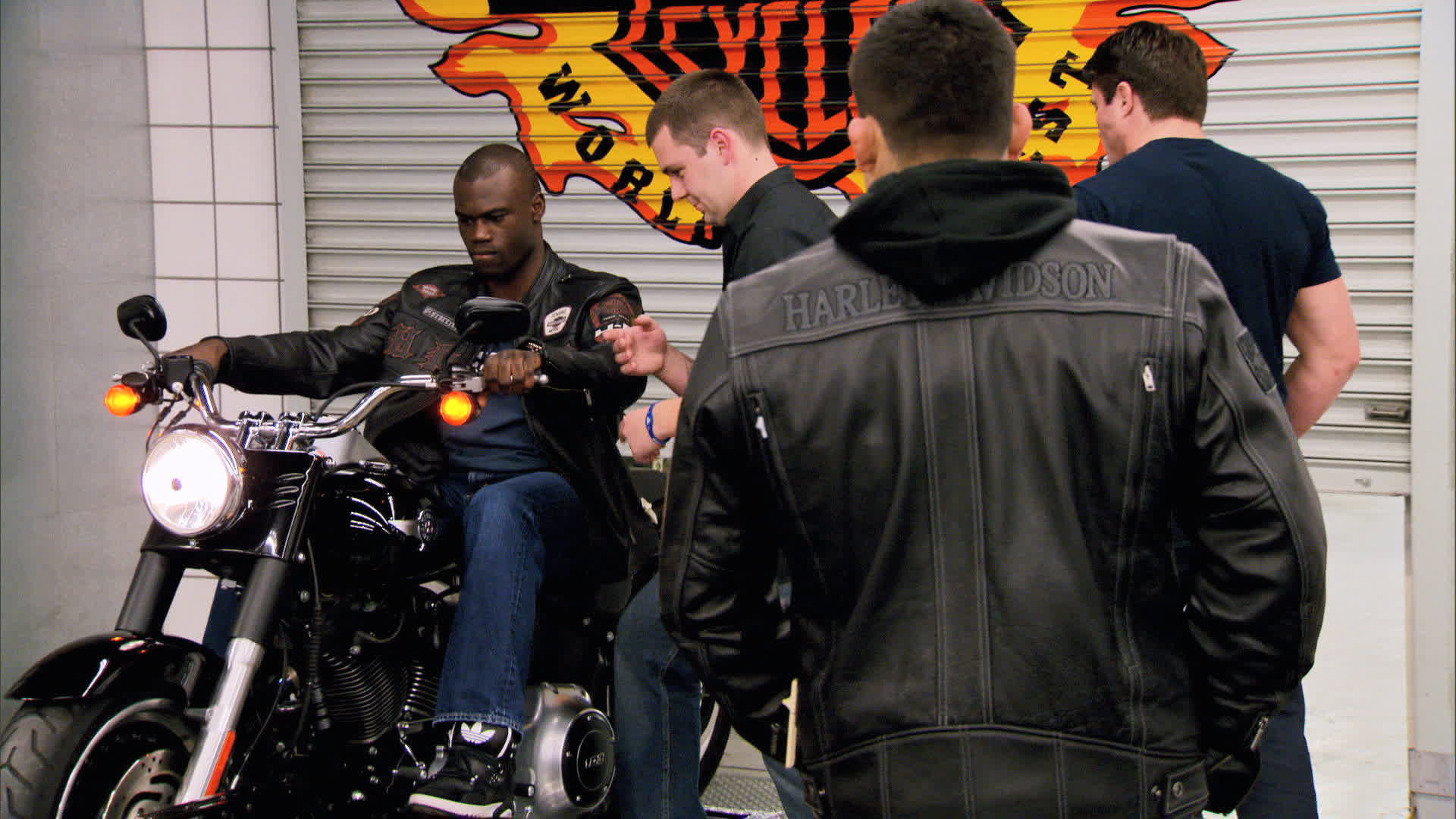 The episode opens up inside a Las Vegas Harley-Davidson shop for some “boot camp.” Since the winning fighter and his coach will receive a fully-oaded motorcycle, the remaining guys learn a few pointers and pick out a dream bike. Not certain which model he’d like, Chael Sonnen at least assures us that it will be black. We also learn that pretty much every guy in the final four has never ridden a motorcycle before, so what’s the worst that could happen? Speaking of calculated risks, everyone tells Uriah Hall that he looks good in a fedora.

Josh vs. Kelvin
Things immediately transition to the first semifinal fight between Josh Samman and Kelvin Gastelum. Josh has his usual confidence and Kelvin again flies under the radar. Adam Cella thinks that Josh wins easily while Coach Chael says, “[Kelvin’s] not great at anything...his biggest strength is that he’s effective.” Before you know it, it’s fight time. 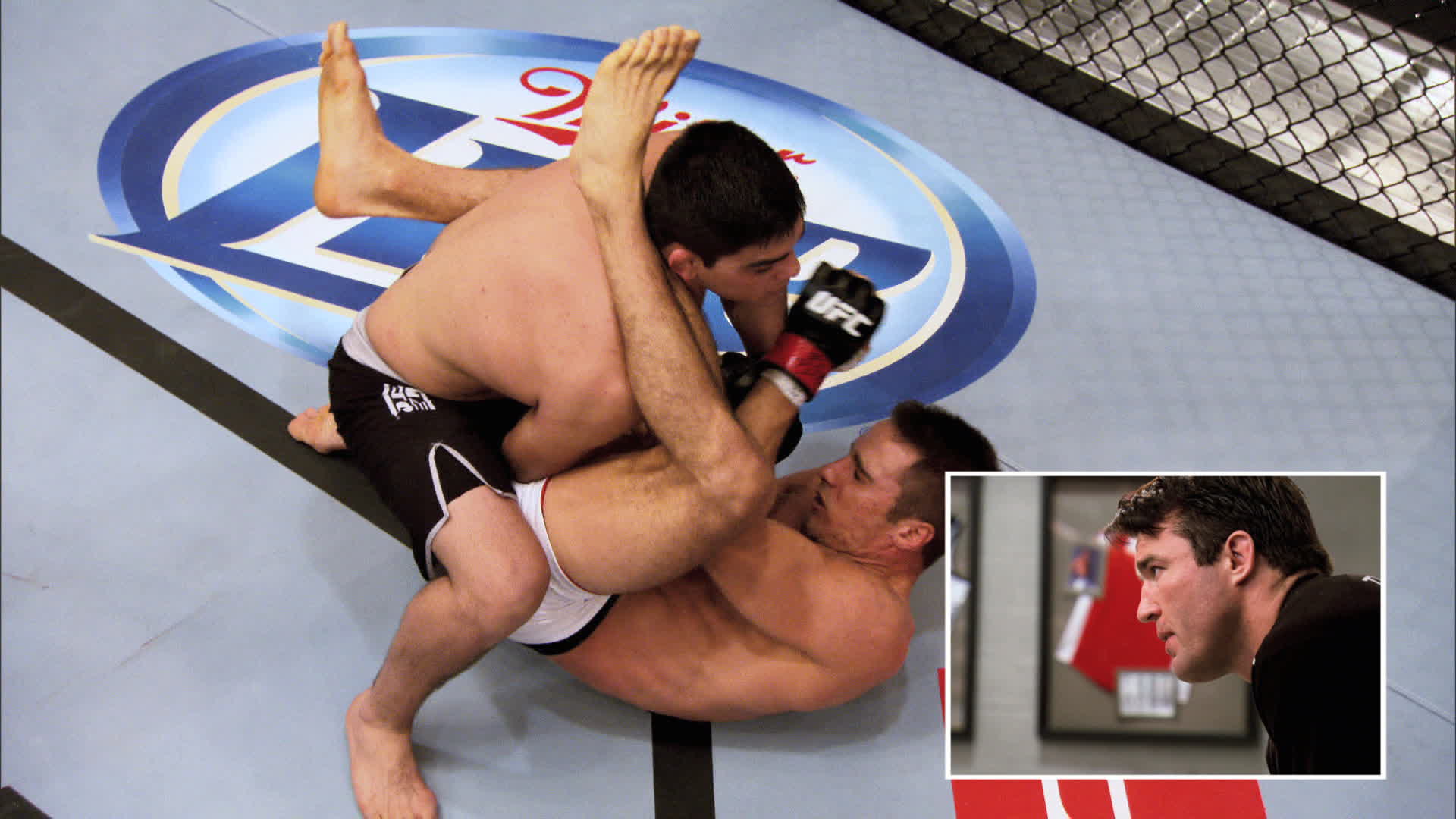 The fight starts with a short feeling-out process. After Kelvin nails Josh with a 1-2, Josh rushes in and finds himself in a bodylock. Kelvin drags him to the ground and begins working from full guard. Josh throws up an armbar attempt; Kelvin defends and tries to pass. This gives Josh an opening and he stands up, forcing Kelvin against the fence. They exchange a few knees and Kelvin reverses positions. Josh attempts a hip toss, but Kelvin ends up on top. From half-guard, Kelvin starts dropping short elbows and stiff punches. Josh stays active on his back and tries to escape, but Kelvin suffocates him with hip control and ground-and-pound. Kelvin advances to side mount and Josh tries to use the small opening to escape. He gives up his back in the process and Kelvin locks in the rear naked choke. Josh quickly taps and Kelvin Gastelum is heading to the finals!

Jon Jones is obviously disappointed and calls it a “tough fight to watch.” Josh characteristically finds a way to compliment himself in defeat. Kelvin is all smiles and even busts out his Tony Montana impression.

Dylan vs. Uriah
There’s a quick transition to the second semifinal match between Dylan Andrews and Uriah Hall. Chael Sonnen can’t seem to find enough positive things to say about Hall. He talks about how much talent and skill Uriah possesses. He even says that Hall could beat middleweight champion Anderson Silva (though he won’t actually say the Spider’s name). It must be difficult for the other guys sitting there -- they have to listen to their coach go on and on about how much better their teammate is than they are. Then again, Chael also taught them that emotions are fake so they should pretty much be numb by now.

On the Team Jones side, Dylan is receiving a pep talk from his assistant coach and father figure Stonehorse Goeman. Dylan then lets us in on what a Dana White congratulatory speech sounds like...I think. There were too many bleeps for the sentence to be coherent. Dylan makes the ill-fated Rocky comparison, Dana White enjoys an energy drink and it’s time for the second fight. 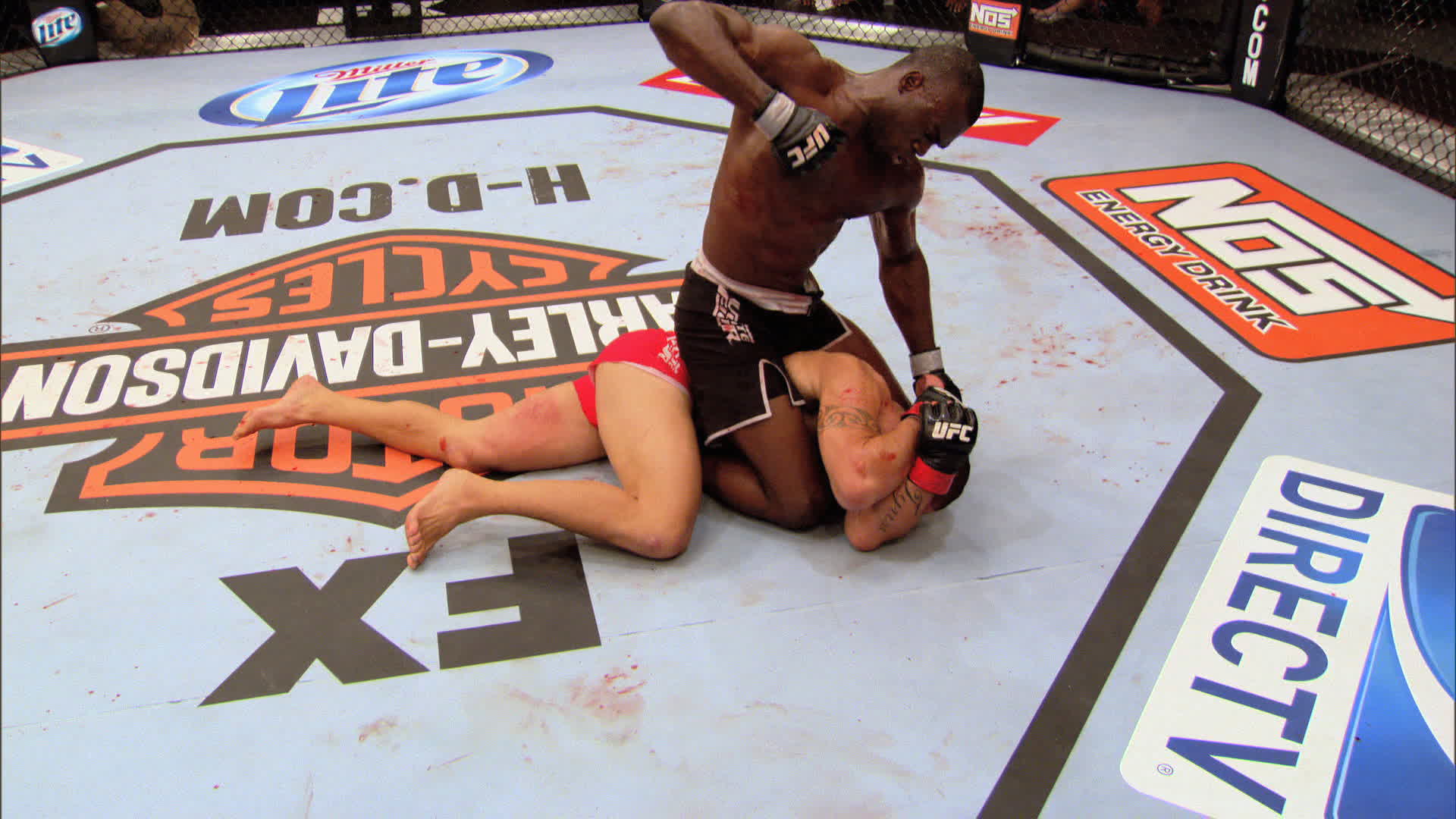 The first round begins with the two trading jabs, which Uriah wins handily. Dylan tries a looping hook to get in and tie Uriah up, but he’s easily brushed aside. Uriah throws some spinning stuff that misses, and Dylan appears much too tentative. Hall engages whenever he wants, while Dylan is too focused on defending to get anything offensive going. He finally lands a solid counter right, but does not follow it up. Hall continues to land kicks and tears up Dylan’s legs. He switches things up with a spin kick to the body. Hall is completely controlling the fight, but does not want to get involved in prolonged engagements. This pattern continues until the round ends.

In the corners, Chael has his usual lofty praise for Hall. Jon Jones tells Dylan, “You’re doing a lot of waiting,” and pushes him to step things up.

Uriah opens up the second round with a glancing head kick. He starts backing Dylan down and continues to pop his jab. It looks like Dylan’s nose may be broken. Despite this, he throws a big right hand and attempts a takedown. Hall easily brushes him again. Dylan keeps touching his face, so odds are that his nose is broken. Uriah keeps pumping that jab as Dylan tries to answer with big looping punches. Finally Dylan gets a tie-up and pushes Uriah against the fence. Dylan keeps working and finally brings Hall to the ground. He can’t relax since Uriah immediately locks up a kimura. Unable to get his arm free, Dylan keeps punching Uriah in the body to no avail. Hall releases the hold, starts punching from the bottom, rocks Dylan and uses that to sweep. Once on top, Uriah rains down punches, Dylan turtles up, and the ref jumps in to stop it.

Dana praises Uriah Hall for taking his time (no, really!) and picking his opponent apart. He also says it's the first time he's seen someone score a TKO from the bottom position. It’s bittersweet for Dylan. He’s disappointed that he lost, but he’s happy to going back home to his family. Jon Jones tries to wrap the season up and describe his opinion of Chael Sonnen. He even goes far enough to say that he respects Chael, but then immediately retracts the statement. Team Darkside teammates Kelvin and Uriah have what Dana White describes as “the worst faceoff ever,” and that’s it for TUF 17! 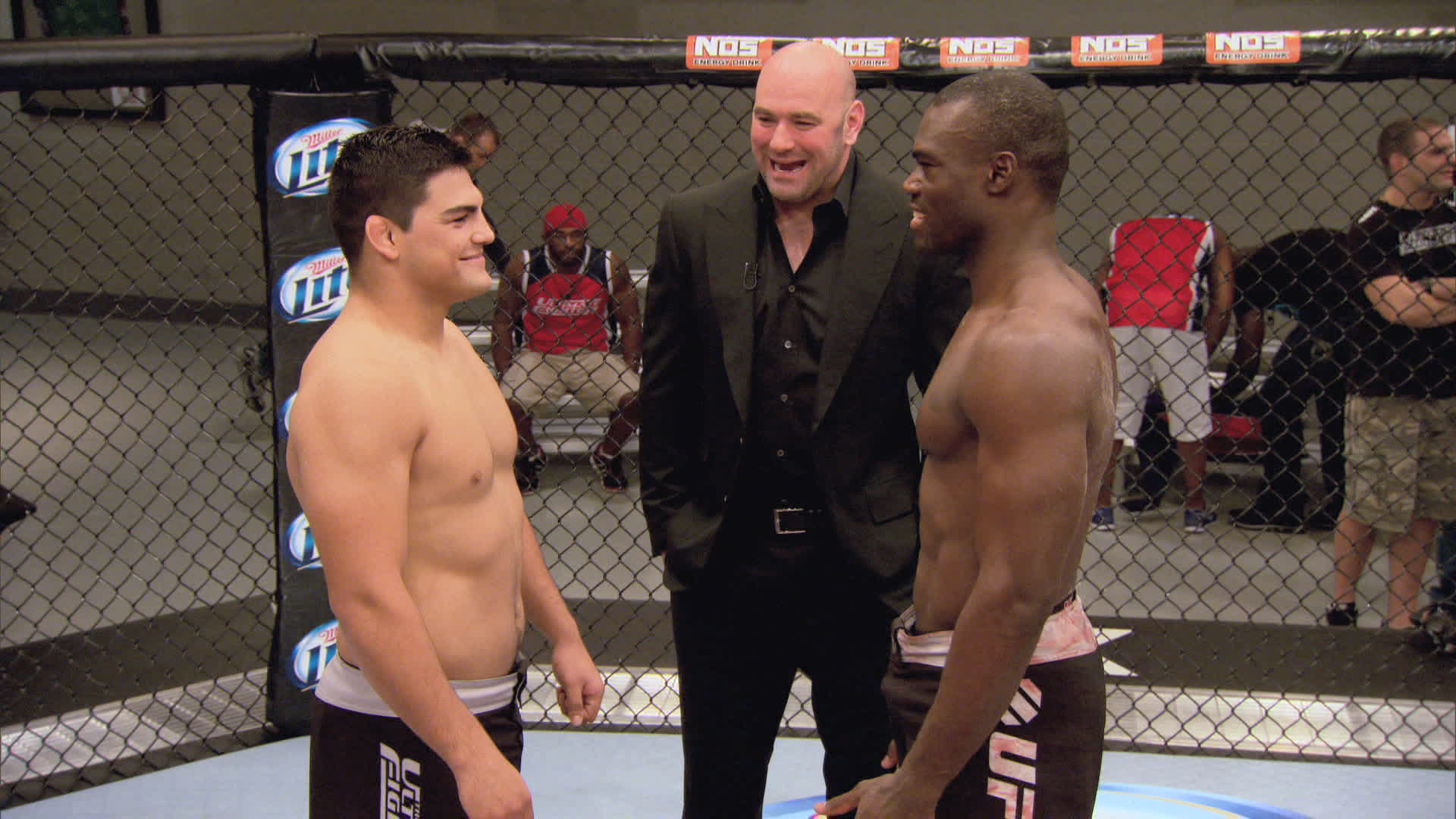 We cut to a preview for the finale on Saturday, April 13th. Will Kelvin Gastelum become the youngest TUF champion ever? Who will coach against Ronda Rousey in the 18th season? Can Collin Hart fight just so we get to hear Bruce Buffer introduce him as, “The Dick?” Find out this and more at The Ultimate Finale!