FIELD FINALIZED FOR THE ULTIMATE FIGHTER® ON FX

Tuesdays just got TUF™. On January 22, some of the world’s most talented and determined mixed martial artists will face-off in the most grueling sports tournament on television. Watch as 28 mixed martial arts prospects battle for a coveted spot on the new season of The Ultimate Fighter®, which begins with a special two-hour premiere airing at 8 p.m. ET/PT on FX.

The Ultimate Fighter, the Ultimate Fighting Championship®’s long-running reality television series, will run for 13 weeks and will culminate in a three-hour finale, live from the Hard Rock Hotel & Casino in Las Vegas, Nev. Unlike previous seasons on FX, the one-hour broadcast will now be shown on Tuesday nights at its new regularly scheduled timeslot of 9 p.m. ET/PT.

The 14 successful combatants will be divided into two teams, which will be coached by two of the fiercest rivals in all of sport. UFC® light heavyweight champion and MMA superstar, Jon “Bones” Jones will captain one team, while the controversial and charismatic challenger Chael Sonnen will lead the second team into battle in this, the 17th installment of the series.

The coaches will then collide for the light heavyweight title on Saturday, April 27, at UFC® 159: JONES vs. SONNEN at the Prudential Center in Newark, N.J.

Not surprisingly, both Jones and Sonnen will be bringing their trademark self-confidence into their stints as coaches this season on The Ultimate Fighter.

“I thought it would be a good way to share myself with the sport of MMA,” Jones said. “I embrace the role.”

Said Sonnen: “The hottest show on FX is being graced with the greatest talent God ever made: Chael P. Sonnen.’’

The list of finalists in the middleweight (185 pounds) division was trimmed from more than 250 applicant athletes. The fighters - all seeking the opportunity of a lifetime and a six-figure contract from the Ultimate Fighting Championship - hail from the United States, Australia, England and Sweden.

“The quality of guys we have this season in unbelievable,” said UFC President Dana White. “From the fights to get into the house, to every single fight this season, I think the talent is some of the best I’ve ever seen on this show. We’re going to end up with some really good guys in the 185-pound division.”

“The production value has increased, the talent level is at an all-time high, and we have two of the most dynamic personalities in all of the UFC as our coaches,” said Chuck Saftler, EVP of FX Networks. “I’m extremely excited about this season of The Ultimate Fighter and truly believe this could be the show’s best season yet.”

On Jan. 22, the season will launch with 14 gripping elimination scraps. Those victorious in the opening round, or “Fight In”, become official cast members and earn their place in The Ultimate Fighter house in Las Vegas. The winners will be drafted into opposing teams of seven by Jones and Sonnen. Thereafter, cameras will document their activity before and after their training and fights during the season.

Each episode’s winners will advance in the single-elimination tournament until one is crowned The Ultimate Fighter. 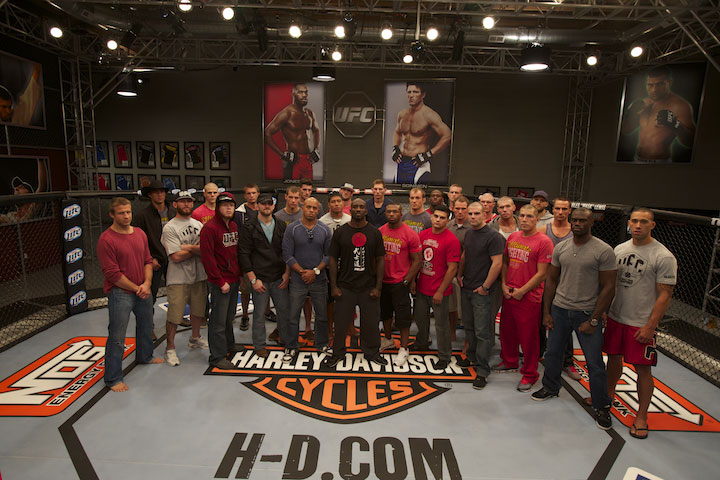 Many of today’s most recognizable names in the UFC have emerged from the TUF™ series, including, among many others, Forrest Griffin, Kenny Florian, Rashad Evans, and Michael Bisping.

Tune in and watch who will become the next THE ULTIMATE FIGHTER on FX!

For more show information, bios, videos and photos, visit ultimatefighter.com and don’t forget to follow us on Twitter under our new name @TUFonFX or on Facebook.com/TUF.