Weekly recaps of The Ultimate Fighter: Team Carwin vs. Team
Nelson, airing Fridays on FX at 10 p.m. ET/PT, with re-airs on FUEL TV Sunday nights, UltimateFighter.com a week after that and UFC.tv.

After recapping last week’s fight, we cut to the Team Nelson locker room for the reaction. Victorious underdog Joey Rivera can barely contain his excitement. Quoth the Boom Boom: “I’m so excited for the win...which is awesome.” 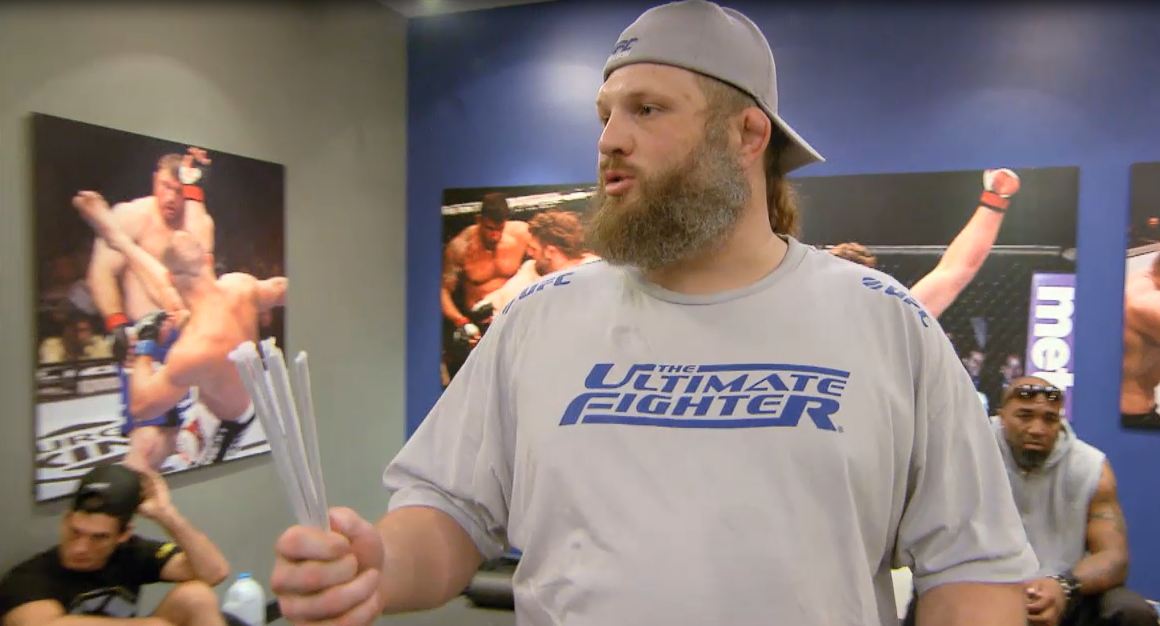 Coach Roy Nelson doesn’t waste any time deciding who will fight next; and by Coach Roy Nelson I mean straws. Whoever draws the short straw "wins" and can either fight next, or pass the short straw to a teammate. The eventual short-straw-holdee will fight next and can choose his opponent. He’s pretty open about this strategy, saying, “For me there was a lot of stress in picking who to fight.” And hey, no one gets into cage-fighting expecting there to be bumps in the road.

Michael Hill doesn’t seem too enthusiastic about this type of decision making but goes along with it anyway. Julian Lane (aka "The One With the Red Mohawk") draws the short straw and decides not to trade it away. He then muses over who he’d like to fight and narrows it down to his in-house rival Matt Secor, Mike Ricci or Bristol Marunde.

Both teams are back at the UFC gym for Dana White’s big surprise. The fighters and coaches will get to venture out of their secluded mansion hole for private screening of Kevin James’ MMA based movie Here Comes the Boom. While I’m sure they all enjoyed the movie, I think they were more excited when Uncle Dana said that they could go to the concession stand and, “Get whatever you want.”

In the Gym
Cut to Team Nelson’s training session where there are some questions about Julian Lane’s cardio. Roy doesn’t believe that Lane came fully prepared and in shape. This is affirmed after  their second round of circuit training when Nelson asks, “Who wants to go a third?” and everyone agrees except Lane.

Then it’s time for the fight announcement. Lane decides to call out Bristol Marunde because he thinks Bristol is not a well-rounded fighter. Coach Carwin disagrees and tells us that he believes this is a great matchup for the more refined Marunde. As the two finish their staredown, Bristol simply says, “Big mistake,” to Julian who responds way too late with, “Yeah! For you!” It was a comeback that would have made George Costanza proud.

We then watch Team Carwin’s training session and they really don’t seem too concerned. The coaches claim that Lane is only a brawler and Bristol should be fine. Marunde may not be concerned about Lane’s technique, but he’s certainly worried about his weight cut. When he found out about the fight, he was 186 lbs. and doesn’t have much time to whittle his way down to 170. He claims that he’s not stressed about it, but you can tell he’s not 100% sure he’ll make weight.

Back at Team Nelson practice, Coach Roy shows some signs of frustration with Julian Lane. The coaches are trying to teach him some footwork within the Octagon that will prevent him from getting stalled against the fence, but Lane struggles. Nelson worries that if Lane doesn’t move and take the center of cage, Bristol will be able to hold  Julian against the cage and stifle his offense.

It’s time for weigh-ins and Bristol is the first one up. He steps on and the commissioner shouts out that he’s 170 lbs. "on the dot!" Julian says that he didn’t make weight because the scale was still unbalanced when the commissioner called it out. Conspiracy! He tells Roy Nelson and they talk it over a little bit and don’t do anything. Lane then gets up, makes weight and they have their staredown.

In the next segment, we begin to see the man behind the mohawk as Julian Lane tells us about his personal life. Unemployed with a daughter and another child on the way, Lane sees TUF as his chance to finally provide for his family. Bristol Marunde echoes the same sentiments as he talks about his son and how at 30 years of age, it’s make it or break it time for his MMA career.

Fight Time
Round one begins with each fighter throwing a couple wild punches. Bristol closes the gap and puts Lane against the cage, right where he shouldn’t be. No real damage occurs for over a minute, but then Marunde lands a knee to the body that causes Lane to cry out. They break their clinch and trade some big shots; Marunde starts to bleed from the bridge of the nose. He ties up Lane again, but soon has the hold broken. Already appearing gassed, Lane keeps retreating, looking to land a big haymaker right hand. With 20 seconds left, he shoots in, gets stuffed and suffers a couple nasty elbows to the body as time expires.

In between rounds Roy reminds Lane about their game plan and to focus on Octagon control; Team Carwin coaches tell Marunde to clinch even more.

As the second round begins, Lane immediately backs up. Bristol lands a couple of strong leg kicks that buckle his opponent. Lane continues to throw big overhand rights, fails to connect solidly and finds himself back on the fence. He fails an inside trip attempt, but uses it to take Bristol’s back. He doesn’t have the position for long, though, and winds up back against the cage. The round ends with Team Nelson trying to talk themselves into believing Julian took the second, but odds aren’t in their favor.

The decision comes and all the judges score it 20-18 for Bristol Marunde. Coach Nelson’s reaction is mixed credits Julian for winning the standup exchanges, but is clearly frustrated with the fact that Lane got himself pushed up against the cage. Dana’s chief criticism of the fight is that Marunde should have turned it up in the second round when he had Lane hurt with the leg kicks. Coach Carwin wishes Bristol had better closed the range and says Lane's diminished cardio helped his fighter win. 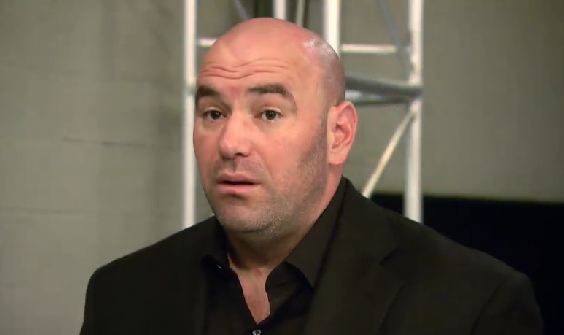 After the fight, Roy Nelson decides it's the right time to talk to Dana about Marunde’s alleged missed weight. He asks Dana if he wants him to "keep on eye out on the commission" in the future. A beside-himself Dana makes the RUFKM face shown to the right and says, “Well if the commission said [he’s 170], it’s true.” After some time for reflection,Dana shares his thoughts on Big Country's suggestion: “ This guy says the dumbest [expletive] [expletive]. You can’t fix stupid.”

After the coaches' reactions, we see the fighters themselves. Bristol gives the usual, “You’re gonna have to kill me to beat me blah blah blah,” story while Julian Lane shows a moment of vulnerability. The loss plus his economic situation finally overwhelm him and he breaks down crying in the locker room. “I ain’t got no money. I got nothin’. I let my daughter down.”

The sneak peek at next week’s episode raises a couple of important questions. Does
Julian Lane go off the deep end? Will Mike Ricci finally have enough of
Nic Herron-Webb? Does Roy Nelson show up in a Columbo coat to investigate the crooked commissioner? Find out this and more next week
on The Ultimate Fighter Fridays!

In the meantime, be sure to follow me on Twitter @dannyboydownes the
show @TUFonFX and check out some of my other work here. And if you have any suggestions for how to best attempt to fix stupid, I'm sure Dana would be all ears.