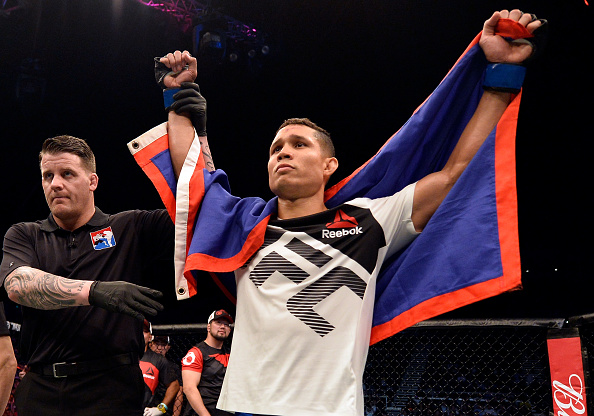 Two consecutive split decision losses didn’t have Jon Tuck doubting himself, but he knew he needed to make a statement in his June 2017 fight against Takanori Gomi.

“I never once doubted myself or questioned what kind of fighter I am,” he said. “But you can’t leave it in the judges’ hands because sometimes they’ll leave you heartbroken. I always put my heart and soul into training and to be robbed like that…”

Tuck’s voice trails off, clearly still bothered by the defeats to Damien Brown and Josh Emmett that made 2016 one to forget for the Guam native. A shot against former PRIDE champion Gomi was just what the doctor ordered, though.

“It reignited me,” said Tuck, who had the Japanese star on his radar for a long time, even before he turned pro in 2007.

“That was a huge honor for me because I was asking to fight Gomi, in every respectful way, of course, because I did watch him as I started training, and even before I started training,” he said. “A lot of the legends from his era, some of them are still fighting – which is pretty bad ass – but some of them aren’t even in the sport anymore. So I wanted to get a fight with Gomi and that’s actually what every martial artist wants – to share the Octagon, share the ring, share the mat with a legend. And I was just stoked about it. It was going to be straight martial arts when I got in there and sharing the Octagon with him was definitely a great moment of my career.”

Even though Gomi has fallen on hard times on fight night in recent years, Tuck was facing one of his fighting heroes in Singapore, and when that happens, things don’t always go as expected. Great fighters may have one great fight left, and the favorite may find himself doubting whether he can pull off a win against that fighter he grew up watching. But fight week was smoother than ever for “The Super Saiyan.”

“Leading up to the fight, I was wondering, ‘Why am I not nervous? Why am I not feeling these nerves that I used to go through?’” said Tuck. “And I think it’s just maturity in this whole thing. I was on a mission to get my hand raised and I treated him like every other opponent. I give them respect, but I’m in there to do everything it’s gonna take to get my hand raised and live that moment. I felt the maturity. I wasn’t getting overexcited. I was just me. I was comfortable in there, composed. Everything that I envisioned and felt, that all happened.”

Just 72 seconds into the first round, Tuck submitted Gomi via rear naked choke. It was his first win since May 2015, and it reminded the world that in perhaps the UFC’s most stacked division, Tuck has the goods to make some noise. Not that he ever doubted it.

“Some of the guys that I’ve fought have fought for the title, so I know where I stand, and I’ve been saying it for the past couple years,” he said. “Of course I had to get surgeries here and there, but I’ve been saying that I know I belong at the top with the best. We have a stacked division, but any given night, I would take out the best guy, even the champion himself. And that’s not overstating what I’m capable of.”

This Saturday, Tuck faces Drew Dober in Lincoln, and if he wins, it will be the first two-fight winning streak of his nearly six-year UFC run. That’s a big deal, and Tuck is eager to make another statement.

“You can’t take the fighter out of me,” he said.