Tsarukyan: "I'm Not An Underdog"

"I have to win to prove everyone who doesn’t believe in me wrong and show that I'm not an underdog like a lot of people think.”
By E. Spencer Kyte • Apr. 16, 2019

One of the most difficult things for a new addition to the UFC roster to do is make an instant impression and generate momentum right out of the chute.

For every Conor McGregor who carried a ton of hype into his preliminary card pairing with Marcus Brimage and had the panache to steal the show in Stockholm six years ago, there are seven, eight or nine athletes with solid resumes and impressive skill sets who begin their UFC journey in the shadows.

Sometimes it can take two, three, four fights before an unheralded talent can start to build momentum and, even then, their ability to make progress up the divisional ladder usually hinges on so much more than simply their performance in the cage.

This weekend in Saint Petersburg, Russia, Arman Tsarukyan gets a chance to hack the system.

Rather than facing another neophyte in one of the first couple fights on this weekend’s 12-fight event at Yubileyny Sports Palace like the majority of promotional newcomers, the 22-year-old lightweight will carry his 12-fight winning streak into a co-main event showdown with burgeoning star Islam Makhachev.

“I'm very lucky that I get to face such an experienced and well-known fighter in my debut,” said Tsarukyan of the opportunity to square off with Makhachev on Saturday. “I'm glad it's happening the way it is and I'm not worried at all.” 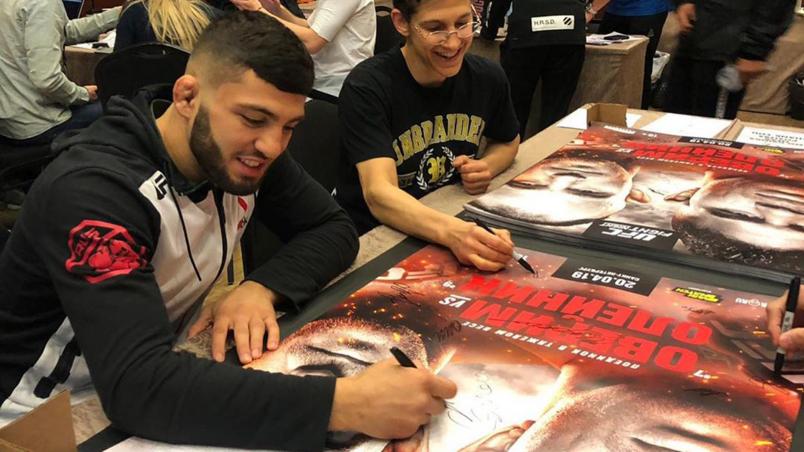 While his confidence is admirable and expected, getting paired off with the Dagestani standout would be a rough assignment for anyone in the lightweight division at the moment.

Since getting knocked out in his sophomore appearance in the Octagon, the teammate and training partner of reigning lightweight champion Khabib Nurmagomedov has rattled off four straight victories to climb to the fringes of contention and within arm’s reach of a place in the Top 15.

He spent a combined five minutes and 40 seconds in the cage last year while registering first-round stoppage wins over veterans Gleison Tibau and Kajan Johnson, establishing himself as one of the top emerging threats in the loaded lightweight class in the process.

And now Tsarukyan is being tasked with halting his momentum in his promotional debut and in the penultimate fight of the evening no less.

If he’s feeling any pressure or dealing with any nerves, the young newcomer is doing a very good job of keeping them under wraps as he counts down the days until he makes the walk to the Octagon for the first time.

“Mentally, I'm prepared very well,” said Tsarukyan, who has registered victories over former UFC competitors in three of his last four fights. “I don't care if it's a main event or co-main event, I'm approaching everything very professionally like I always did before in each of my fights, so I don't feel any pressure about being in the co-main event.”

While he admits that getting the call from his manager informing him that he had been signed by the UFC hit him like a shot of electricity in the early morning hours when he got the news, the disbelief that lingered for the first days eventually dissipated and Tsarukyan started preparing for his matchup with Makhachev.

Training out of Tiger Muay Thai, the young lightweight was joined on the mats by a host of teammates who will compete alongside of him this weekend, including fellow newcomers Movsar Evloev and Rafael Fiziev, as well as Antonina Shevchenko, the sister of reigning flyweight queen Valentina Shevchenko, who makes her second start under the UFC banner against women’s MMA pioneer Roxanne Modafferi.

Having a host of teammates and additional coaches around throughout fight week should help make his first appearance in the UFC feel a little more familiar, but again, it doesn’t seem as if graduating to the biggest stage in the sport is having any real appreciable impact on how Tsarukyan is approaching this fight or sees things playing out.

“I can say I know everything about my opponent at the moment,” he responded when asked what he knows of Makhachev and what he brings to the table. “I know his style, his approach to the fight and his techniques.

“I feel the fight will go the full distance and it will be a beautiful and exciting contest, because both of us can wrestle and strike,” he added, forecasting what his maiden voyage into the Octagon will look like on Saturday night. “You’re not going to see only wrestling. It will be a mix; a full display of fighting.”

And while prior victories over the likes of Felipe Oliviera, Junior Assuncao and Takenori Sato — all of whom had a cup of coffee in the UFC while posting a combined 2-6 record — gave Tsarukyan an understanding that he has what it takes to compete against UFC-calibre opposition, a victory on Saturday night against Makhachev will mean so much more.

“I fought UFC veterans, but they were never ranked fighters in the UFC,” he said, reflecting on his matchups with Oliviera, Assuncao and Sato. “Fights with them helped me grow as an athlete and gave me a lot of experience.

“A win in Saint Petersburg will have a huge meaning for me because I have to win to prove everyone who doesn’t believe in me wrong and show that I'm not an underdog like a lot of people think,” he added. “It will be great push for my UFC career.”

And if he gets his way, it will be the start of a busy schedule in 2019 as well.

“I hope to have three more fights in 2019,” said Tsarukyan, who seems to want to mimic the torrid schedule kept by another Tiger Muay Thai product, bantamweight rising star Petr Yan, who fought four times in eight months to begin his UFC tenure. “It doesn't matter what result of this fight will be; I want to stay active and fight every two months.”

Regardless of the outcome, the fact that he’s jumping into the deep end of the lightweight talent pool right out of the gate and eager to maintain a Cowboy Cerrone-esque schedule makes Tsarukyan someone to keep an eye on this weekend and beyond.