Trujillo looks to return to winning ways in '16 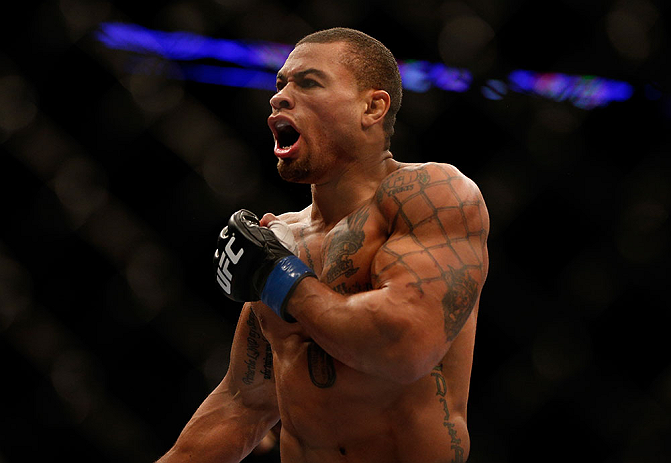 Abel Trujillo isn’t one to put too much stock into superstitions, luck or happenstance, but finding the silver lining in adversity is a practice he’s embraced for as long as he can remember.

While success is always the ultimate goal where competition is concerned, the lightweight powerhouse understands that the desired results will not always be achieved. That’s one of the many parallels between life and sport, and having a clear perspective of the similarities between the two have allowed the South Florida transplant the ability to find positives in otherwise negative situations.

In this regard, the past year of Trujillo’s life and career has provided a great example of his mental fortitude, and he intends to turn things around in a big way in 2016.

“Fighting is just like life, where there are going to be ups and downs,” Trujillo said. “I’ve been down for a bit and now I’m ready to get back up. I’ve always found that when the pressure is on, it brings the best out of me.

“There is always a little extra added motivation when a fighter is an underdog. Whoever is in the blue corner is supposed to be the guy who wants it more, but that’s just a perception thing. At this point in my career I’m going to be ready to fight whether I’m in the blue corner or the red one because I have a different level of experience now compared to when I first got to the UFC.”

As his 2014 campaign was drawing to a close, the heavy-handed slugger appeared to be on the verge of breaking through into a much larger realm of visibility under the UFC banner. While it may have taken him some doing to make it to the sport’s biggest stage, the Boca Raton-based knockout artist had made significant waves since his arrival in 2012. It certainly wasn’t a flawless start by any means, but back-to-back thunderous knockouts over Roger Bowling and former WEC titleholder Jamie Varner had a solid amount of buzz circulating around the scrappy slugger.

The only thing standing in his path was fellow rising prospect Tony Ferguson, and there was a lot of hype circulating around their tilt at UFC 181 on Dec. 6. The winner would move on to compete with the big boys in a stacked division, and Trujillo was confident he would be the man to move up. That hubris ultimately came back to bite him as a rear naked choke from “El Cucuy” sealed the deal in the second round of the fight and brought Trujillo’s winning streak to a halt.

While Trujillo was eager to shake off the sting of defeat, injuries kept him on the sidelines for the majority of 2015. When his bout against Gleison Tibau was announced for November, the opportunity the lightweight upstart had been waiting for finally materialized. Nevertheless, redemption would not be found, as the bout was stopped in questionable fashion in a move that sparked controversy throughout the MMA community.

“It’s crazy how things work out,” Trujillo said. “I was feeling good going into that Tibau fight. That was supposed to be my time to shine but things didn’t work out the way I wanted them to. The referee making that call and stopping the fight the way he did was one thing, then Tibau failing two drug tests following the fight were another wrinkle. The UFC wasn’t happy with how all of that played out and I think that’s why they gave me this fight on such a quick turnaround. They are giving me a chance to regain my traction and I’m happy for the opportunity.”

Although the Brazilian veteran had Trujillo’s back and had applied a submission attempt, the official stopped the fight because he believed Trujillo had lost consciousness when he was in fact very much present. Yet, since the bout was officially waved off and the action stopped, there was nothing Trujillo or his team could do to change the result. His wounds were further salted when news broke that Tibau had failed a pair of drug tests following their showdown in Sao Paulo, Brazil, and while he hopes his appeal will ultimately change the loss to a no contest on his record, his current situation is one where he’s dropped back-to-back showings inside the Octagon.

“I look at my three losses in the UFC, and even though I lost, there are still positives to be found,” Trujillo said. “My first one came against Khabib [Nurmagomedov] and a lot of people think he’s the guy who will become the champion, except he’s having a hard time staying healthy and can’t compete right now. My second loss came to Tony Ferguson, who is on a huge roll right now and making a lot of noise in the division. The other came against Gleison, who has the most wins in the history of the division.

“I’ve already been thrown to the wolves and I’m still standing. At this point who else can they give me that can bring something I haven’t already seen? I’m ready for whatever comes my way and I’m going to turn things around starting at UFC 195.”

He will be not only looking to turn things around when he steps in against Tony Sims at UFC 195 this weekend in Las Vegas, but he wants to do so in a fashion that brings the energy that once surrounded him back full force. Trujillo knows he has a fighting style the fans love to see, but his ambitions are more than being just an exciting performer. He wants to become a major player in the heated ranks of the lightweight collective, and the only way to make that happen will be to snap his current skid and get back to his winning ways inside the Octagon.

“The energy is good right now, man. This is one of those fights where I had to do a lot in a short amount of time and it was a little hard on the body, but I’m ready to get in there and get it. All the work was worth it and I’m ready to do this,” Trujillo said.

“At the same time you have to get out of your comfort zone to truly grow. My coach Neil Melanson always keeps it real with me, and he said for this camp I needed to get comfortable being uncomfortable. That was the main focus and it allowed me to have a great camp where I put a lot of work in and I’m ready to fight. I am expecting to have a great performance and I’m going to make this fight count. I am ready to get back to where I’m supposed to be and that’s in the winner’s circle.”

And while his career inside the Octagon may be the primary focus for the present and the foreseeable future, Trujillo has also taken steps to carve out a lane toward working on another one of his passions as well. The lightweight prospect has been in the process of developing his chops as a hip hop artist behind the microphone and already has one completed compilation to his credit.

Fighting takes up the lion’s share of his time, but Trujillo has found a good outlet in music that brings some much needed distraction from the rigorous grind that comes with a life in the fight game.

“Music is something I really enjoy doing. I have ‘The Fight Life’ mixtape and I plan on doing more. I can rap but I can also sing as well. I’m like Drake but I can knock people out,” he laughed.