After Facing Her First True Professional Loss To Sijara Eubanks Last September, Julia Avila's Strength And Abilities Will Be Put To The Test As She Looks To Set The Record Straight
By E. Spencer Kyte, on Twitter @SpencerKyte • Jun. 21, 2021

Sure, there is an earlier loss on her record, from her bout against Marciea Allen under the Invicta FC banner, but the contest lasted just 49 seconds and ended because Avila suffered a compound fracture to her left ring finger after blocking a kick. Last time out, however, the 33-year-old took a more conventional loss, starting well before getting dominated over the final two rounds by Sijara Eubanks.

“I don’t know what I don’t know until I test myself, and I don’t have that many fights under my belt,” the thoughtful Avila offers, reflecting on her loss to Eubanks as she readies to return against Julija Stoliarenko this weekend in Las Vegas. “A lot of them are first-round finishes and I’m grateful, I’m fortunate, and I don’t want every fight to go the distance, but I didn’t know I had horrible takedown defense until I fought ‘SarJ,’ right?” 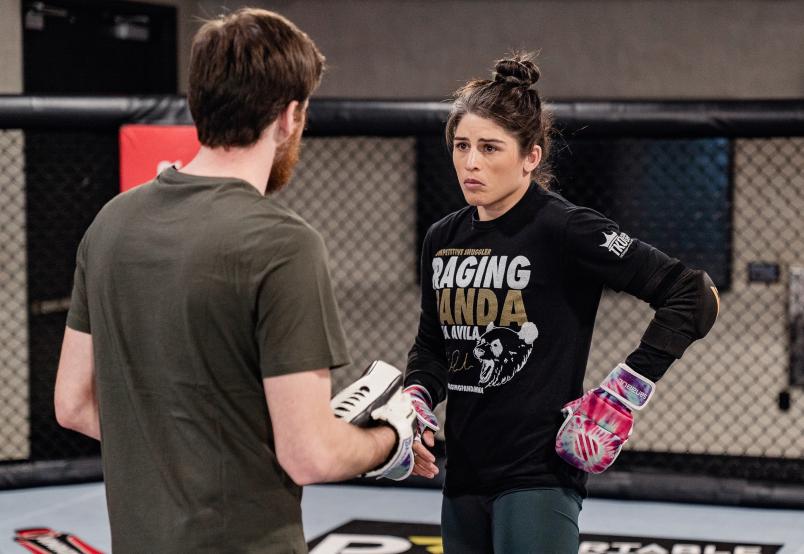 That’s the double-edged sword that ultimately cuts many talented and emerging fighters as they work their way through the regional circuit and reach the biggest stage with limited experience: success papers over deficiencies and shortcomings, only for them to be exposed once you run into a more seasoned, more experienced foe who can exploit the holes in your game.

While she earned victories over future UFC fighters Marion Reneau and Nicco Montano in two of her first three fights, the bout with Eubanks was just the tenth of Avila’s career, with more than half of her previous outings ending in the opening frame, as she said, only one of which lasting more than two minutes.

Handling your business efficiently is always the aim, but it also means limited exposure to live-action situations, and as great as working through scenarios in the gym and logging hard sparring rounds can be, nothing can ever replace the lessons learned in the heat of battle against someone chasing the same victory you’re after.

“I am humbled in it, and I give it to her — she is absolutely amazing,” Avila says, heaping praise on Eubanks. “I watched her come up in Invicta, and I watched her fight Aspen Ladd both in Invicta and the UFC, and it’s eye-opening to me that I know I can hang with them and I can get better, but these are the holes in my game that I needed to work on.”

Avila cracks up, joking about how despite what her resume may suggest and how her last appearance went, she would actually identify her ground game and jiu-jitsu as her strongest suits whenever asked. 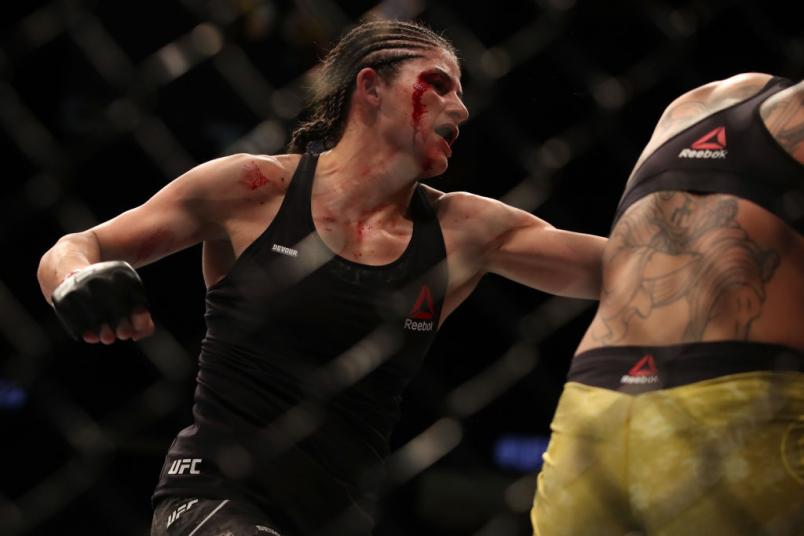 Julia Avila punches Pannie Kianzad of Sweden in their bantamweight fight during the UFC 239 event at T-Mobile Arena on July 6, 2019 in Las Vegas, Nevada. (Photo by Christian Petersen/Zuffa LLC)

I suggest that it’s her gameness and general scrappiness that stands out most to me, noting that unlike stronger takedown defense, those two intangibles fall in the “you either have it or you don’t” category, and she’s clearly stocked up on both.

“That’s what drives me in this sport is the grit and the intensity of it, and you’re absolutely right — you can’t teach that,” she says. “There is absolutely something wrong with me because I am a cave woman — I am the person on the team that was the hunter; I am not the gatherer.

“Not many people can do this, and I am one of the few with something wrong with me that really enjoys the primal fight of it.”

Though she laughs after every sentence, there is obvious truth to what she’s saying, and that willingness to step into the fray and mix it up, no questions asked, has been evident throughout her brief UFC tenure. 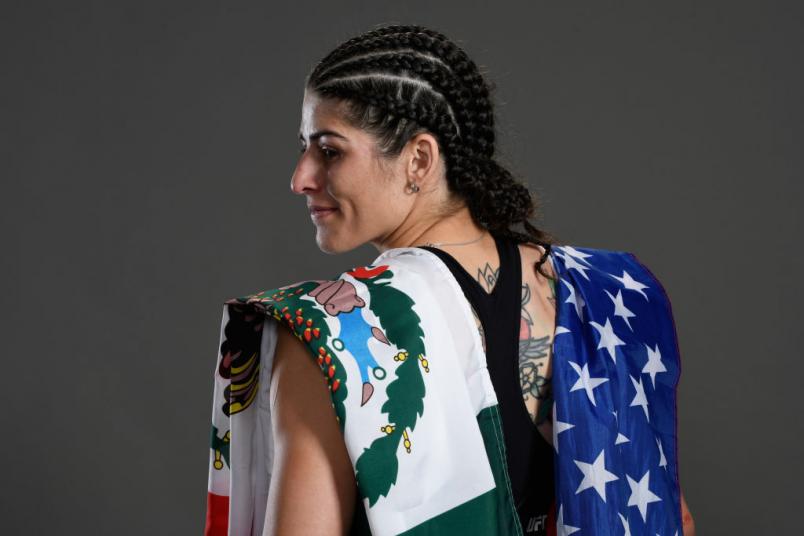 Julia Avila poses for a portrait during the UFC 239 event at T-Mobile Arena on July 6, 2019 in Las Vegas, Nevada. (Photo by Mike Roach/Zuffa LLC)

Avila has dealt with nine different fight cancellations or opponent changes through her first three UFC appearances, with injuries, scrapped cards due to global pandemics, and positive COVID-19 tests among the various reasons her plans have been changed. This weekend’s bout with Stoliarenko will be the first time in her UFC career that she’s actually faced the opponent she was initially scheduled to fight, though this also the second time the two have been penciled in to punch each other in the face.

“Since the very beginning, it has been a rollercoaster, but I’m down to fight,” Avila says, resigned to her ways. “I love to fight; I don’t care who it’s against. I know that’s not the smartest way to approach things, but I want my fans to know that I’m here, I’m ready to fight, and I don’t care who it is.”

Stay Up To Date With TUF 29: TUF Hub | How To Watch The Return Of The Ultimate Fighter

That rollercoaster ride carried over to her life outside of the Octagon last year, as well, as in addition to losing her job as a result of pandemic downsizing shortly after her loss to Eubanks, Avila was also unceremoniously kicked out of her longtime gym, leaving her without a place to call home for a piece.

While she got plenty of offers from fellow fighters and did make a couple trips out to work with James Krause and the Glory MMA & Fitness crew in Lee’s Summit, Missouri, the perpetual mutlitasker instead opted to add “gym owner” to her curriculum vitae, opening the aptly named Outsiders Combat Club. 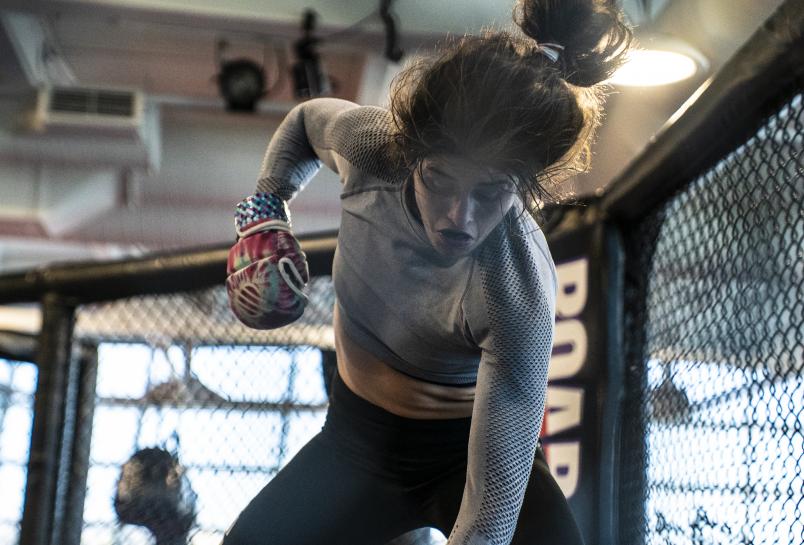 “It’s been pretty crazy,” Avila begins, downplaying the drama with a laugh. “I did get kicked out of my gym, and about 80 percent of the gym left with me, because they thought it was very unfair, so I opened up a gym. I have a responsibility to them, and we didn’t want to start anywhere else, so a group of us decided to open the gym.

“I did have a lot of people reach out to me and it has been absolutely wonderful, but I did feel a responsibility to my people. I love training at Glory and if I could teleport there and back or if it was even two hours closer (I’d be there), but it’s six or seven hours there and back.

“It’s smarter for me to be here, live here, and figure it out after this fight,” she adds. “I know I can handle this one on my own, and fortunately, I don’t have to because I have a strong team of coaches and peers behind me that know the game and that I trust.”

Despite all the upheaval of the last 10 months and change, Avila heads into this weekend’s contest feeling like a million bucks and ready to make the most of her first opportunity to compete this year. 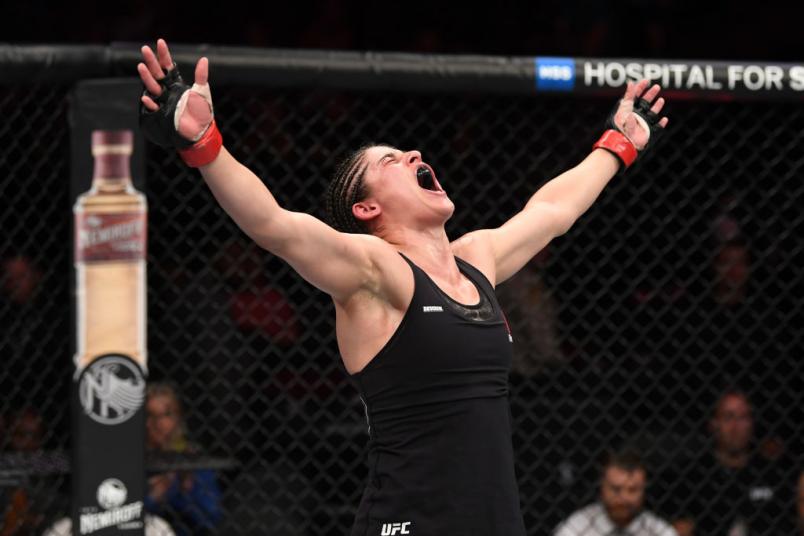 Julia Avila reacts after the conclusion of her bout against Pannie Kianzad of Sweden in their bantamweight fight during the UFC 239 event at T-Mobile Arena on July 6, 2019 in Las Vegas, Nevada. (Photo by Josh Hedges/Zuffa LLC)

“I have honestly not felt this good ever,” she says, her excitement to be back in the cage evident in her voice. “Going into my first fight last year against Gina (Mazany), I felt on top of the world, and I feel better than that. I’m getting older, I’m getting comfortable with my body and what it’s capable of, and I’m going to go in there a more mature and methodical fighter.”

Until she gets punched in the face, at which point the cave woman inclinations will kick in and “The Raging Panda” will come out in full force.