No matter what happens in Argentina this weekend when he faces Darren Elkins, or how his journey through the featherweight division progresses in the coming years, know this about the career of Ricardo Lamas: he’s done things the right way.

Win, lose or draw, the Chicago native has always shown up in shape, on weight, and ready to fight. And all that mattered was letting his work speak for itself.

“I think it comes from my upbringing,” said Lamas. “My parents always brought me up to be an honest person, stay true to myself and growing up I never saw my dad sell out for any kind of money. He stuck to his principles on everything, so seeing that from a man like him, he instilled that in me and I feel the same way.”

It may not make headlines, but it has allowed Lamas to make a life for himself and his family as he chases a championship in the Octagon and life after fighting outside it.

“I feel that if I stay true to myself and train my ass off that I’ll be fine in the sport,” he said. “And I’ve been doing fine and I’m branching out now. Apart from fighting, I opened up my own UFC Gym and I’ll be fine no matter what.”

The UFC Gym in Naperville, Illinois is Lamas’ baby these days, but don’t think that he’s put his exit strategy in motion at 36. Instead, “The Bully” has plenty of fight left in him despite bringing the first two-fight losing streak of his career into Saturday’s bout with Elkins.

“I still see myself as one of the top fighters in the division, for sure,” he said. “In this sport, it’s full of ups and downs, and sometimes you’re on top and sometimes you’re down in the valley. This is the first time in my entire MMA career that I’m coming off back-to-back losses, but I’ve just gotta keep my nose down and keep my eye on the goal ahead. I’ve been grinding this whole time and I feel great and I feel like I’m still improving every camp. The last few fights have been unfortunate, but it’s just a part of the game. You’ve got to roll with it and you can’t let those negative voices in your head come out. I’ve been staying positive and training my butt off to get back on the right track.”

After winning two in a row over Charles Oliveira and Jason Knight in 2016-17, Lamas faced short-notice opponent Josh Emmett in December of last year and got stopped by a perfect shot in the first round. Six months later, it was a split decision defeat to Mirsad Bektic. But in a co-main event slot with Elkins, Lamas has a chance to turn it all around. And to do that, he’s got to look inward.

“Bruce Lee said that there is no opponent and it’s a hundred percent true,” he said. “You’re really fighting against yourself, fighting against your own doubts, your own insecurities and you have to overcome that so that you can perform to the best of your ability on fight night. So the fight is really with yourself, it’s not with the guy that’s in front of you. I think if you’re able to overcome that, you’ll have success in this sport or any one-on-one combat sport.” 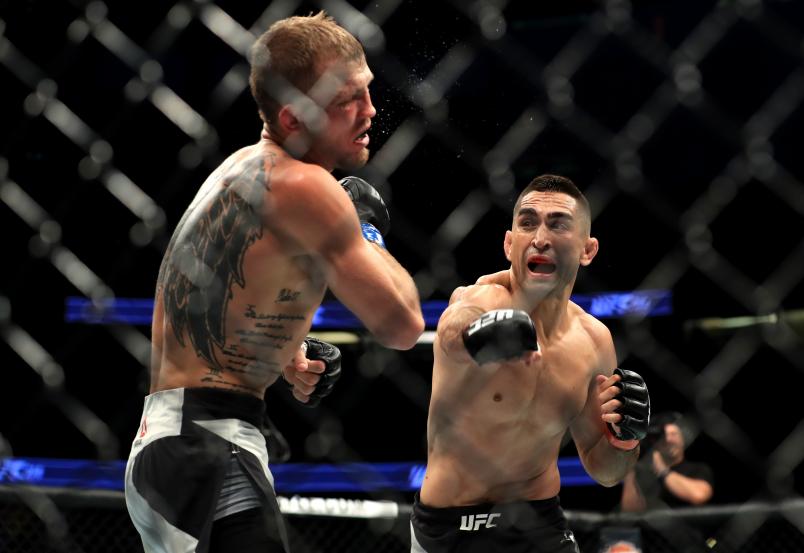 Once he does that, he’ll face a near-mirror image of himself in his fellow Midwesterner, and while that might scare most, Lamas relishes the idea of getting into a 15-minute war with “The Damage.”

“Darren is battle tested, he’s durable and he’s got a huge heart,” said Lamas of his opponent. “That guy never gives up. He could be getting beat on for 14 minutes in a fight and in that 15th minute, if you let up a little bit, he’ll take you out. So I definitely see a little bit of myself in him. I just think that comes from our Midwest wrestler upbringing. We’re a different breed in the Midwest and I think something about those cold winters and those long wrestling seasons toughens you up. So I definitely think this is going to be an awesome fight for the fans to watch. Two guys in there that never give up and we might beat the piss out of each other, but everybody’s gonna enjoy watching it.”

Scary, right? Then again, we’re not fighters like Lamas and Elkins. And these guys want nothing more than to do what they do best for the entire world to see.

“I think every fighter, at some point in their career, wants that Rocky-style fight, that fight where you’re just bleeding all over the place and you’ve given literally everything you have in your gas tank and you’re still out there fighting,” Lamas said. “I think that’s a fight that can propel people’s career and make you known and respected among the MMA fans. It’s something you want to be a part of – not every fight, but maybe a couple times in your career. When it’s over, it’s going to be fun to look back and say you were a part of that.”