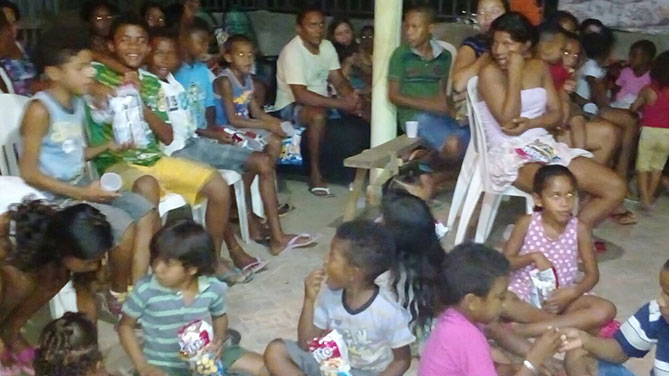 Francisco “Massaranduba” Trinaldo does not talk much, especially when he’s inside the Octagon. But after beating Chad Laprise by knockout at UFC Fight Night Saskatoon, the Brazilian featherweight delivered a speech to his family that touched a lot of people.

“Tomorrow (Monday) I will turn 37 years old,” Trinaldo said. “Mom, have a party for the kids. I never had the means to have a birthday party, but now I can pay for one.”

Few people watching the fight at the home of Massaranduba’s family’s home heard what he said, because the fight night party in the city of Amarante, Piaui, Brazil, was a rowdy one. Pots and pans were banging and family and friends were cheering loudly.

Meanwhile, the fighter’s mother carried on, praying for her son in one of the home’s bedrooms. Mrs. Maria Jose, known simply as Zeze, found out about her son’s wishes shortly after his speech and managed to put on a party for neighborhood children on Tuesday night.

“There were a lot of people at the party, it was really a blessing,” “Mrs. Zeze” told UFC.com.br. “The kids love my son. I was very emotional when I found out he made that request.

“He was able to fulfill the kids’ dream.” -- Mrs. Zeze, Francisco Trinaldo's mother

“My son is like that. Every very time he comes to visit he stays at another house, and over 50 kids spend the day there. He buys food, clothes, throws parties.”

Mrs. Zeze said she had 50 chairs available for the party, but needed to use her home’s couches to accommodate everyone to eventually attended the impromptu neighborhood celebration.

The crowd was so large that the 90 disposable plates were not enough for all the guests, who were eating cake and pizza using paper towels. “I think there were about 100 people here”, an emotional Mrs. Zeze said. “I was very happy to do my son’s wish.”

After the party ended, Trinaldo’s niece sent photos and videos to the fighter, who was overjoyed with the result. “He said he loved it. He was able to fulfill the kids’ dream,” Mrs. Zeze said.

It’s this kind of generosity and playful spirit that has made the fighter known as Massaranduba a local idol. When he fights, the street in front of his family’s home in Amarante is typically filled with chairs, motorcycles and cars surrounding the television his father places outside the house, as an invitation for all to watch his son compete in the UFC.

“It’s a very big party. Everyone wants to watch his fights. But I stay in the house praying. I am a servant of God,” Mrs. Zeze said.

Davi Correia is a multimedia journalist for UFC.com.br.