Tried And Tested, TJ Brown Is As Ready As Ever

Arkansas Native TJ Brown's Start In The UFC Hasn't Gone Quite As Planned, But The Featherweight Won't Be Shying Away From The Tests Of The Octagon Anytime Soon
By Thomas Gerbasi, on Twitter @tgerbasi • Apr. 28, 2021

TJ Brown is a proud man. But even proud men need to know when things need to get shaken up a bit, and after losing his first two UFC bouts, the Arkansas veteran needed to take a hard look at where he was at in his career. That’s not easy.

“It's really difficult, honestly,” Brown said. “I've worked my whole life to be here. 2019, I won four fights in a row and in 2020 I dropped two. It was really just a gut punch, and it really broke my heart.” 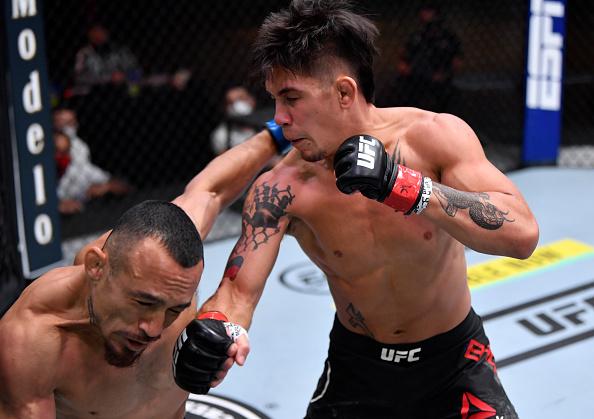 Brown’s been fighting professionally since 2013, and when he punched his ticket to the UFC via season three of Dana White’s Contender Series, he thought he had arrived. But after competitive, but losing, efforts against Jordan Griffin and Danny Chavez, he decided to supplement his training at home in Little Rock with a camp at the Glory MMA & Fitness gym in Lee’s Summit, Missouri.

“It was great,” said Brown of his first camp with Krause and the Glory MMA squad. “James Krause is a great coach and they've got some real dogs at Glory MMA. After two losses in a row, you have to make some changes, and I think James is such a wiz and such a smart coach that he has the adjustments and the changes I need in my career.

"I think everybody knows I'm tough. I've got that mettle, that tough mettle, and I've got that feather in my cap, but I want to be a little bit more strategic, and the guys I'm fighting now, I have to be at my best and fight smart. I think training at Glory this last camp helped bring me to a new level.” 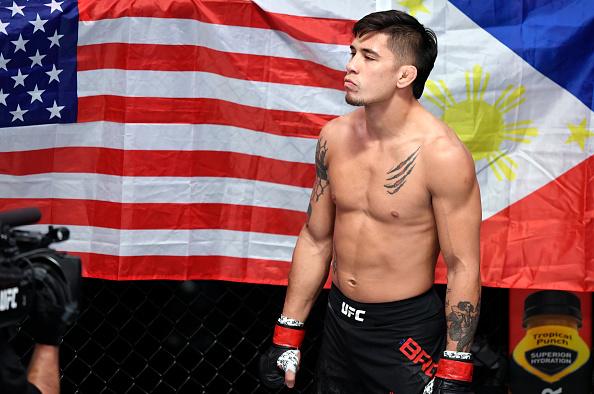 TJ Brown prepares to fight Danny Chavez in their featherweight bout during the UFC 252 event at UFC APEX on August 15, 2020 in Las Vegas, Nevada. (Photo by Chris Unger/Zuffa LLC)

Brown’s level before wasn’t bad, and there was nothing in the Griffin or Chavez fights that made it seem like he was over his head, but in the UFC, the little things count, and in a game of inches, if you zig when you should have zagged, your night is over.

“You look at the stats in that last fight and I had more significant strikes than Danny Chavez, and I was four for four on takedowns on Jordan Griffin,” he said. “Some things happened. But actually losing two, I knew something had to be done and changes had to be made and I made the proper changes. I'm not gonna look back on my career and say 'What If?'

"I made the adjustments I needed to make and besides going to Glory, I've got a Sports Psychologist I'm talking to now and I made the changes and you're gonna see a new version of me.”

That new version will be in Las Vegas this weekend for a Saturday bout against Kai Kamaka III. Kamaka is also two fights into his UFC career, going 1-1 thus far, but as far as Brown is concerned, his time with Krause will be what gives him the edge in this featherweight matchup.

“Krause is a true veteran of the game, and look at all the guys he's got in the UFC, and not just in the UFC, but doing well,” he said. “That doesn't happen by mistake, and that's definitely something I paid attention to. A while back I went for a week to see if it was a good fit, and sure enough it was everything I thought and more. It's a great team atmosphere and the guys there, that is their profession. That's what they're doing every day, training, and that's what I need to be around.” 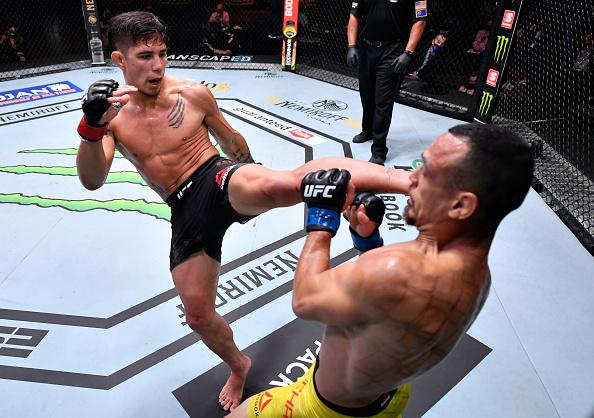 About the only negative is that Brown had to prepare for the bout away from his nine-year-old son Kyler. Family members would bring Kyler out on weekends, but that time apart is never easy on father or son. And though Kyler is young, he is learning about the sacrifices his father needs to make to put food on the table and taking in the life lessons that are sometimes only learned by coming back from adversity.

“It's a tough one,” Brown said of explaining the two-fight losing streak to his son. “He was as heartbroken as me. He's invested into it and he loves the sport. But like I tell him, this is life. These types of things happen, but I'm gonna lead by example, and when you get knocked down you can get back up, brush yourself off and go back. And not just go back, but you make changes and you go about it in a better way.

"I'm not just telling him things; I'm gonna brush myself off and I'm gonna come back this next fight and perform better. There's a lot of things you can't control, but what I can control is my work ethic, and I'm gonna go out there and do my best, and that's all I can ask out of my son is to be relentless, never give up and do your best. And that's what you're gonna see out of me.”

Be relentless, never give up and do your best. Those are some pretty essential traits for a professional fighter. Is Brown paving the way for Kyler to one day follow in his footsteps? 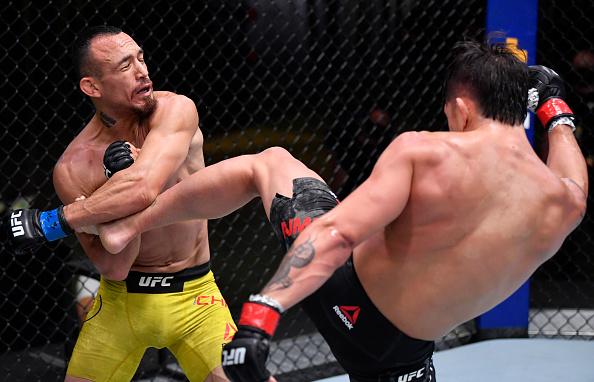 “I wouldn't want him to,” Brown said. “People see all the cool stuff on Facebook and all the lights; that looks cool, but in reality, there's a lot of heartbreak, there's a lot of pain. This is a tough sport. This is the fight game and it's not what people think and I don't want him to compete. But I do want him to be able to defend himself, so that's why I have him in classes and things like that because kids are mean and there are bullies.

"So I do have him in classes so he knows how to defend himself, but I really wouldn't want him to fight. My younger brother, he just finished college wrestling, and he's wanting to fight and I can't let him fight and not support him. I'm gonna be there in the corner and I'm gonna make sure he's the best he can be, but the pain and the hardship I've had to endure, you don't want any loved one to have to go through that.”

This is a crazy game, isn’t it?

“It is the craziest of all games,” Brown laughs, but he loves it and he’s not packing it in anytime soon. There’s still work to be done and goals to be reached, and when things go right, the 30-year-old will be the first to say that there’s nothing like it in the world.

“I love the lifestyle, first of all,” he said. “I love just being able to train and have all the extra time to spend with my son, and the lifestyle's nice. But there's also a feeling you get when you knock a guy out or you win, and you raise your hand and thousands of people are screaming your name. It's a high beyond any high I've ever experienced in my life and I guess that's what keeps me coming back. And at this point, I've got some unfinished business. I didn't make it this far just to make it this far. I wanted to get in the UFC and win some fights, so I've got a bit to prove at this point.” 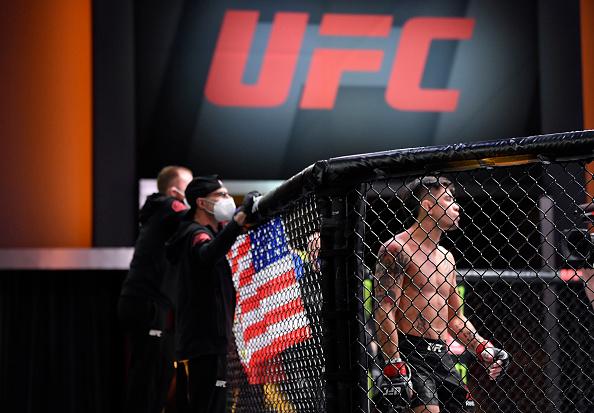 TJ Brown prepares to fight Danny Chavez in their featherweight bout during the UFC 252 event at UFC APEX on August 15, 2020 in Las Vegas, Nevada. (Photo by Jeff Bottari/Zuffa LLC)

It all starts on Saturday. TJ Brown can’t wait.

“It's not enough just to be in the UFC,” he said. “To get that win would really just solidify a lot of things in my life. It would help me sleep at night, as well. So it's gonna mean a lot; you may even see a tear in my eye after the win, because every time I visualize it, I'm almost in tears because I worked so hard just to be here and accomplish this goal. I don't see Kai Kamaka stopping me from doing it.”