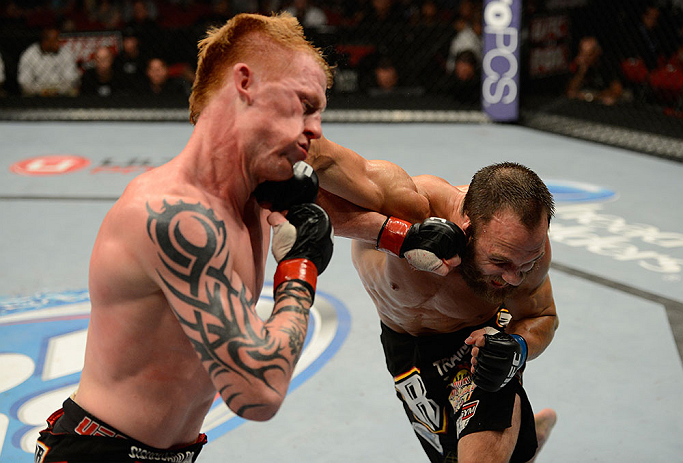 There are plenty of factors that can create a sense of turbulence in a fighter’s career. In a contact sport such as mixed martial arts, injuries lurk around every corner, and rough patches can keep the bigger picture from ever coming into sharp focus.

When those elements are factored into a revolving door of organizational banners that a fighter competes under, stability can become the thing that never is obtained. But while every angle and obstacle that comes into play certainly makes the road difficult to travel, a fighter is an athlete custom built for adversity. It is in their very nature to face up to conflict and battle through the rocky terrain to a place they can carve out as their own.

And that is the chapter Trevor Smith currently finds himself in.

After years of fighting on multiple stages across the sport, the 33-year-old Washington native finally made his way to the UFC in 2013 when the Octagon rolled through Seattle for UFC on FOX 7 in July. The moment was a long time coming in the mind of Smith and he intended to make the most of the opportunity before him. Unfortunately for “Hot Sauce,” he was edged out by scrappy veteran Ed Herman in a three-round war that earned both men Fight of the Night honors.

While there is a moral victory of sorts in putting on an exciting and memorable performance, being on the losing end of a split decision was not the way Smith envisioned things going down.

“The main thing is that it was a huge confidence booster for me,” Smith said. “Ed Herman has had 15 fights in the UFC. He was on a four fight unbeaten streak in the UFC and his last loss came against Jacare Souza. It was not only a confidence boost, but it was the first time fighting had been that fun for me. We put on a war for three rounds. He ended up leaving in an ambulance, and I went to the bar to have tequila shots. I’ve never had so much fun. I wanted to go an extra round…even with a broken hand. I wanted to do another one and figure this thing out.

“I think that really is determined by the individual,” he added in regard to experiencing the famed ‘Octagon jitters.’ “For me, I spent a lot of time in meditation and mindful exercises that really helped me a lot. That made the jitters fairly low for me. I felt like I was ‘there’ but there is absolutely some credence to the Octagon jitters being a real thing. Some fighters get more psyched out than others, but for me, I felt it was one of the best platforms for me to perform on. Other people are going to respond a little bit differently though.”

Nevertheless, a fighter is wired to handle setbacks and Smith refused to let it bog him down. That said, suffering a defeat in Seattle also brought about a stark reality as it was his second consecutive notch in the loss column - a position that comes with a unique amount of pressure and urgency. With spots on the UFC roster as coveted as it comes in MMA, Smith knows he has to turn things around if he hopes to continue fighting inside the Octagon. If he can claim victory in his next fight, and do it in impressive fashion, the release valve will be triggered and he can finally get that piece of stability he’s long sought out.

That opportunity will come front and center when he faces Brian Houston at UFC Fight Night: Rockhold vs. Philippou on January 15 in Georgia. With Houston also coming off a setback in his promotional debut, the matchup will pit two hungry fighters who are eager to get their hand raised inside the Octagon against each other. Smith believes this will create a scenario where the fight will be decided by who wants it more, and the answer to that question is one he has no doubt in.

“I absolutely feel this is a make or break situation for me,” Smith explained. “I have lost a couple tough fights against top guys like Herman and [Tim] Kennedy who are up there as far as rankings and being tough dudes in the sport. But I still look at this fight as one I need to win in order to keep my place on the roster. If I lose I would probably have to win a few fights outside of the UFC to get back in. But I don’t plan on losing this at all. I’m going to go out there and secure my spot in the lineup.

“[Houston] is a guy who has Fight of the Night and knockout potential and I really think it’s a great matchup. He is going to be out there fighting for his life. I’m obviously going to be fighting for my life as well. I think we match up well, but I think I’m a little bit better in every area. I also have more experience than he does and I think he’s going to still be feeling those jitters out there. I just look forward to going out there and showing my improvement. That’s the biggest thing.”

While winning inside the Octagon is the immediate focus on every fighter’s mind, it is absolutely crucial that the evolution of their skill set continues throughout. Once the process becomes stagnant - or progress fails to occur - a fighter’s career can take a sharp turn south in the most abrupt fashion. But for a fighter such as Smith who is still in the early stages of his development, developing all aspects of the game is perhaps the most crucial element.

Where the majority of the focus for a mixed martial artist falls in the physical realm, putting the psychological pieces together can be just as important. This especially rings true when a fighter has experienced a period where things haven’t necessarily gone their way, because the pressures of the situation can be overwhelming.

That said, Smith believes he’s grown in all areas and he’s excited to show off these improvements next Saturday night.

“The mind game is what I’ve learned the most about,” Smith said. “I’ve never been in a better mental place than I am right now. I’m starting to get that right mindset. I’m getting more comfortable inside the Octagon and I’m putting the hours into improving in the areas I need to grow in. I’ve only really been doing this for three or four years now but now everything is starting to come together. I’m seeing an improved game all around - both mental and physical.

“People can expect to see excitement in this fight. This is one of those fights where I need to win and secure my spot in the lineup. I’m going to be more intelligent, but then again, this is a fight and anything can happen. Maybe I’ll get hit and decide this is going to be another Fight of the Night-worthy slugfest where we exchange punches and see who comes out on top.”