With everything going on in the world, Trevin Giles tried his best to keep his focus on his jobs as a fighter and police officer.
By Zac Pacleb, on Twitter: @ZacPacleb • Jul. 30, 2020

Trevin Giles laughs a little when asked about his second short-notice opponent change in as many fights. Last-second changes are part of the fight game, sure. But what makes Giles laugh is the fact that it seems like the last couple switches landed him in higher profile fights.

First, James Krause stepped in to fight him on a 24-hours’ notice when Antonio Arroyo pulled out, and now, Kevin Holland is stepping in to fight Giles after Junyong Park had to withdraw from their August 1 date. Giles was successful in the former, despite some controversy (which, we’ll unpack in a moment), and he hopes the circumstances help him against Holland.

“It just gave me the experience of having a short-notice fight like that. That was extremely short notice as far as an opponent switch, so I guess now it’s not as surprising as it would be for that to happen. That’s pretty much it. Besides that, just being able to be in a controversial fight where a bunch of people have something to say because, more likely than not, something like that will happen again in the future just given the nature of the sport and the judges, and stuff like that. It can be for me or against me, but it just gave me a little bit of that experience.”

That experience was one for the books. Giles was coming off two losses and excited to compete in his adopted hometown of Houston. On top of that, the bout was the featured prelim on ESPN ahead of the UFC 247 main card. Unquestionably, the fight was already important for Giles.

The profile of his fight skyrocketed, though, when Krause decided to step in for Arroyo. Krause was lauded for his courage in taking the fight with essentially no-notice in a heavier weight class in which he’d never competed. But, for Giles, it also meant a late switch, and even though Krause is a longtime roster member, the name wasn’t ringing any bells.

“I’m not a huge MMA fan or anything like that,” Giles said. “I’ll watch some of the big events and stuff, but I don’t really keep up that much. I didn’t really even know who James Krause was until he raised his hand to fight me when my opponent dropped out. I started getting whatever knowledge I needed about him. Then I found out he had coached Zak Cummings when we fought, and I didn’t even know that. I found that out when I was getting ready to fight (Krause).”

When the fight started, Krause leaned on his slick jiu-jitsu to threaten Giles with a choke for most of the first frame, but Giles eventually escaped. From there, Giles showed his game, landing heavy strikes on Krause over the next couple of rounds, and when the scorecards were read, two of the judges saw the bout in Giles’ favor. 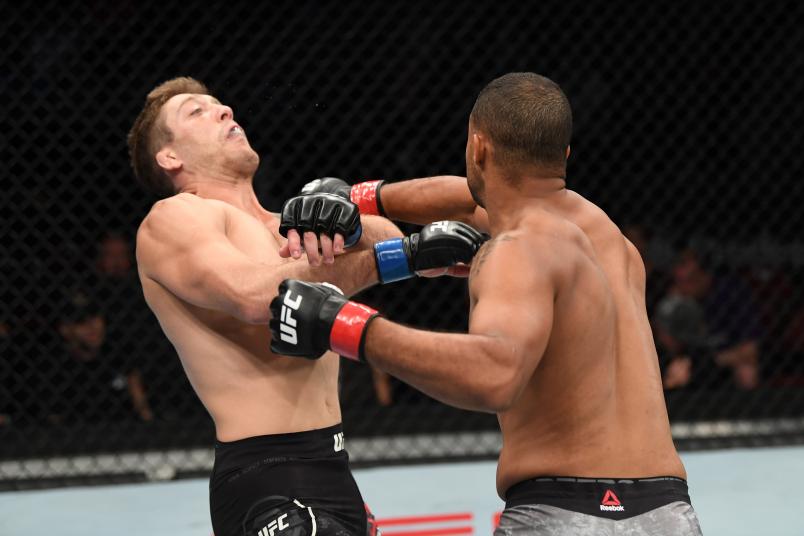 Some people – well, a lot of people online – disagreed, and the outrage only increased when the scorecards showed one judge gave the first round to Giles. But at the end of the day, Giles was the one with the win, the one who snapped his long skid, and the one who gained a delayed confidence boost.

“I watched more of Krause’s stuff just because there was a lot of talk about him afterwards,” Giles said. “I was just like, ‘Man, he must’ve really made some moves.’ Once I saw that, I kind of felt like my ground game should be a little more respected because of getting out of that rear naked choke he had me in. I didn’t realize how big of a deal it was until after the fight.”

Following his 12th pro win, Giles returned to his life of working two jobs — a fighter, and a police officer in Houston. The latter is the one that kept him busy as the world shut down due to the coronavirus pandemic because Giles was deemed an essential worker. But things got even busier when the Black Lives Matter protests swept the country in early June.

For Giles, among many other things, that meant longer shifts at work and sacrificing time at home in order to continue his mixed martial arts training.

“It was just waking up, training, going to work, going to sleep, getting up and doing the same thing over and over,” Giles said. “It was rough for a second, especially with all the protests and stuff. Sometimes, it was a little bit hard to focus. Different people think differently, especially when you start talking about different races and stuff like that in regards to George Floyd and all the other stuff that’s going on. Sometimes, it can make for a bit of a weird training environment. You have social media and people are saying certain things, and people just started showing their true colors and stuff. I don’t know. For a second, it felt like it all kind of merged with the training and work because everybody was in the same conversation.”

That conversation is one that everyone, especially in America, is experiencing whether they want to participate in it or not. It’s the moment the world is in as two historic events occur side-by-side. The volume on it is increased ten-fold for Giles as he moves through his life as a police officer in a time when the job is under intense scrutiny.

Even though he understands that everyone has opinions, he also believes the baseline that “right is right and wrong is wrong. Should an officer be sitting on somebody’s neck for that long? Any reasonable person can look at that and say, ‘No,’ especially as somebody that does martial arts,” Giles said, referencing the police officer who knelt on George Floyd’s neck, leading to his death. 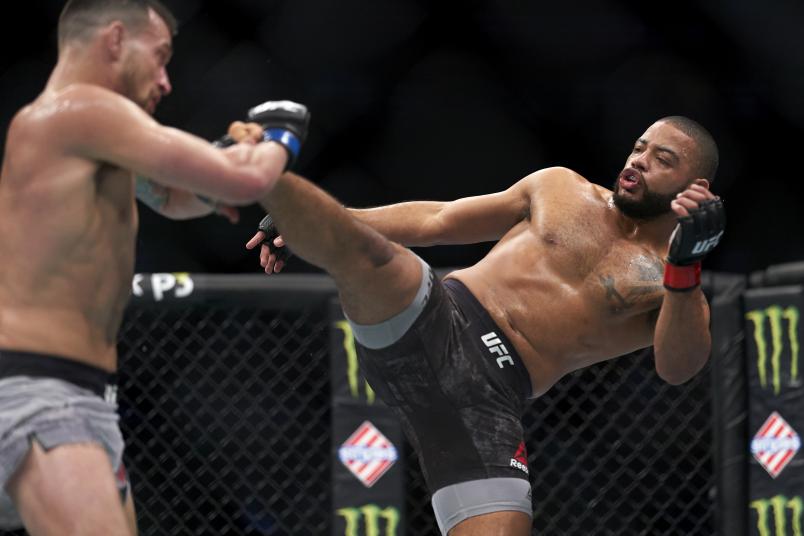 “Eight minutes is a long time. If you sit there and try to count to eight minutes, that’s a long time to be counting, and imagine if somebody is on your neck while that’s happening. Same thing with the masks and stuff like that. Right or wrong, if I step into a store and they want me to have my mask on, that’s what they’re asking of me to keep the public safe so I don’t get something from somebody and somebody doesn’t get something from me, is it right or wrong just to go ahead and put that mask on? And is it a big deal? I don’t know. A lot of people are making things more complicated than they need to be.”

Ultimately, though, Giles said he was still able to live as normally as normal gets right now. Occasionally, he’d see a post on social media from someone he considered a friend or acquaintance that rubbed him the wrong way and decided to cut ties with that person. Awkward, sure, but good in the hopes of cutting “negative energy” from his already-stressful life as he trained for his fight.

On the front of his mind at the moment is how to tackle the puzzle that is Holland, whose only UFC losses have been to Thiago Santos and Brendan Allen. Holland is a long, rangy puzzle with well-rounded skills, and Giles is intrigued by what the matchup might bring.

“He’s somewhat a mystery,” Giles said. “It’s going to be interesting standing in front of him and being able to feel him out and see those little things that you can’t really see on film, but you just have to feel.”

Heading into his fifth UFC bout, Giles said he is starting to get a sense of what the difference is when fighters gain experience, especially when he fought Krause and Gerald Meerschaert. He respects their efficiency and level-headed demeanor in the fight.

Giles is also interested in how he’ll respond to the crowd-less environment in the UFC Apex. He has enjoyed the fights over the last couple of months and noticed that everyone seems “a little bit more violent” without fans cheering on the competitors. He calls on his days as a football player in Texas at Taylor High School and suspects the bout might feel like a scrimmage, but he is mostly going to wait and see how he feels.

Regardless, Giles’ approach is a little different than what you’ll hear most fighters describe. There isn’t a change in mentality when he enters the Octagon, but instead, he tries to remain emotionally even keeled and think of the bout as something else other than just a brawl. It’s a headspace that probably helps in his everyday life, and one that might help him take home the win on August 1.

“I try not to flip a switch,” Giles said. “I always try to remain the same. Some guys kind of flip the switch by talking mess or something like that, and it kind of gets them – once you start talking mess back, now they got a reason, so it doesn’t feel as awkward. I just try to think of it as a sport. All the guys I fight, I don’t even really know them. I have not met one person that I’ve fought until I actually fight them. I don’t have anything against them. It’s a tense situation, but I try not to think of it as a fight. I try to think of it as a sport, and we’re both lucky to go in there and compete. If I do that, then fights are less sloppy because you’re competing, and you’re focusing on your performance.

“I feel like if you do that, you’ll get a lot of wins, so that’s kind of where I try to keep it.”