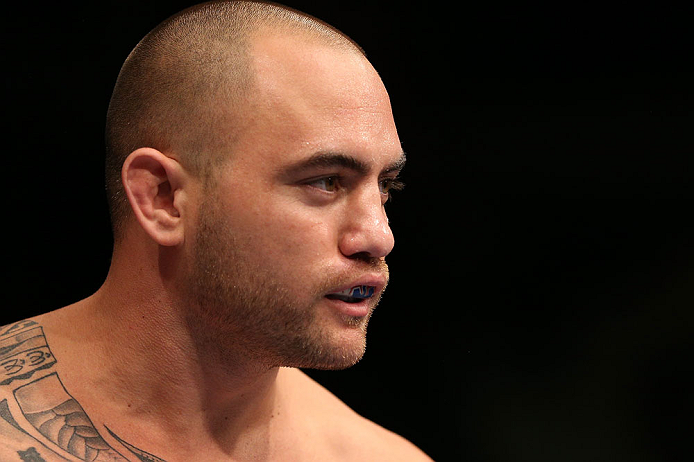 UFC heavyweight contender Travis Browne doesn’t get upset if you say that he walks to the beat of his own drummer. He just wonders why more people don’t do the same thing these days.

“I think that people that are realistic about things are the people that get pegged as the ones that walk to the beat of their own drummer,” he said. “In these times, people tend to try too hard to outsmart common sense. I like to look at myself as being old school.”

So when you speak to the Hawaii native, don’t ever expect the usual answers or the wisdom that has been passed down over time as conventional. In Browne’s world, you can expect the unexpected.

Case in point, his upcoming UFC Fight Night co-main event with Alistair Overeem this Saturday in Boston. You would think that if only for psychological reasons, the 6-foot-7 Browne would stand up extra straight at the pre-fight weigh in and try to look down on the 6-foot-4 Overeem, a guy who isn’t used to looking up at opponents too often. “Hapa” isn’t necessarily buying that line of thinking.

“Size doesn’t matter,” he said, “and that’s been proven with the days of the Brock Lesnars and Shane Carwins. Bigger isn’t always better. So I might be taller, but weightwise, he’s still a little bigger than me. And at the end of the day, it comes down to skill, hard work, and the will to win. I think that’s what this fight’s going to come down to.”

It’s honest, and it’s old school. It’s also far from the usual chatter you’ll hear before a fight. Or even after it, as Browne admits that while tearing his hamstring moments before losing the first fight of his career to Antonio “Bigfoot” Silva last October gave him a built in excuse to explain away the defeat, having such an excuse may have hindered him in the lead-up to his comeback win over Gabriel Gonzaga in April. 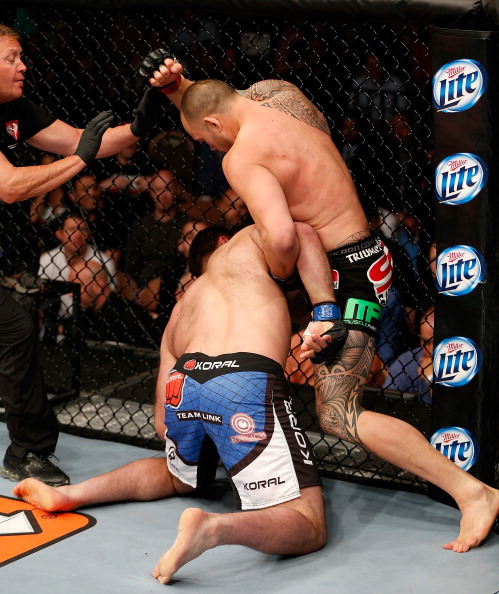 “I think if anything, that didn’t necessarily help me recover (from the loss),” said the 31-year-old. “It might have done me a disservice because it gave me an excuse, and as a fighter you don’t want to make excuses for yourself. You want to be able to accept something and move on from there. That’s one of the biggest poisons of a fighter’s mind. Having to get over ‘here’s why I lost – it wasn’t because of me, it was because of my leg,’ and getting past that and accepting the fact that I lost the fight is really what helped me move on and grow as a fighter and become more determined and harder working and all that kind of stuff.”

And in keeping with his ability to see things for what they are and not what they could be if seen through rose-colored glasses, Browne knew that in this sport, the odds of staying unbeaten forever – especially at the UFC level – were slim and none.

“In MMA it takes one little clip with four ounce gloves and that changes the fight completely,” he said. “But you’ve seen guys get injured, breaking their hands or breaking their arm or something like that and they’ve gone on to win a fight, so I really can’t make any excuses. There are guys that have blown their knee or broke their leg and they finished the fight, so I can’t make excuses like that. It happened, it is what it is, and it’s definitely made me stronger as a fighter.”

From there it was up to him to make sure he reduced his odds of another loss as much as possible, and against Gonzaga, Browne showed no ill effects from the injury or his first defeat against Silva. Not that he had a lot of time to, as he needed just 71 seconds to stop the Brazilian and pick up a Knockout of the Night award. It was the kind of win that almost put him right back to where he was before the Silva fight, and with a win against Overeem, he will likely skyrocket into a wide open title picture.

“We’re here to make a statement,” said Browne of this weekend’s bout. “Daniel Cormier already has a fight, and he’s saying he wants to drop down to light heavyweight, so that takes the number three spot away. I think the verdict’s still out on (Fabricio) Werdum. He’s had some pretty good finishes his last couple fights, and I can see the winner of our fight fighting Werdum for the number one spot. So we’ll see how it goes, but I think a statement definitely needs to be made in this fight in order for that to happen.”

“If you get in this sport and you look for certain fights, you’re in the wrong sport,” he said. “If you’re in this sport, your goal is to become a champion, and when you’re a champion, you don’t get to handpick your opponents – they’re picked for you. So for me, it doesn’t matter who I fight, because I’m gonna have to fight you one day, one time, one way or another. And I’m not gonna be able to get around it and I don’t want to get around it. This is what I do for a living and this is what I chose. So if you have the heart of a champion, you can’t pick your fights. You accept every fight that comes your way.”

But will he stand up straight on weigh in day against Overeem?