"As soon as they told me who I was fighting I got excited because I knew
that it would be a great fight and a war.  It’s something that the fans
will get a kick out of." - Travis Browne 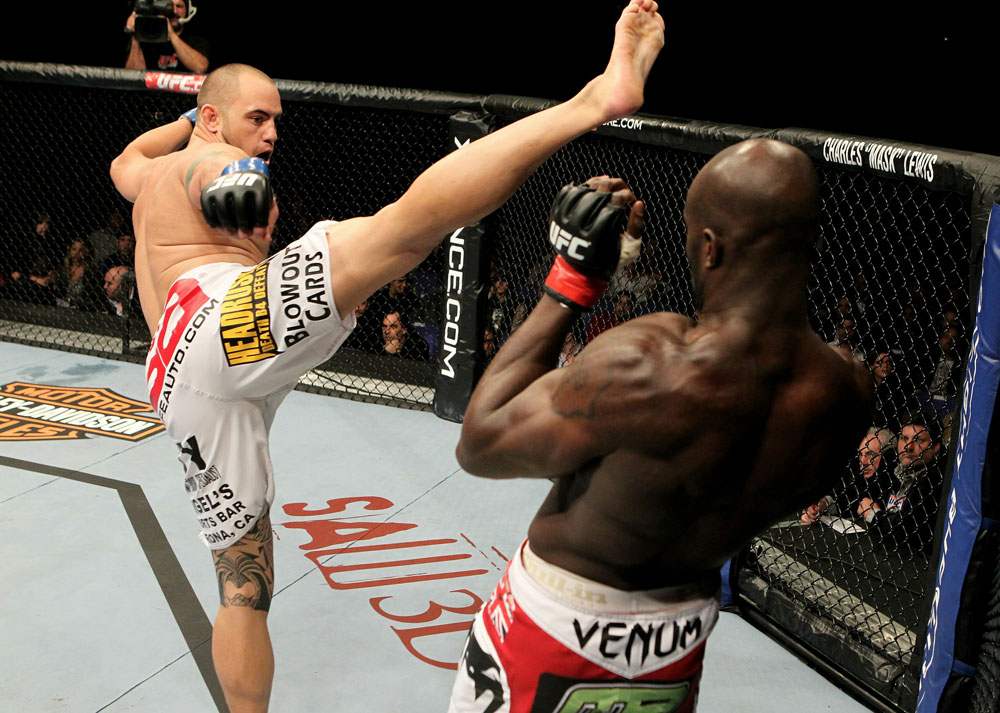 In the crowded world of heavyweights that we have all seen mounds of tape on, fighters like Travis Browne are refreshing.  Sporting an undefeated record of 10-0-1, with just two of those bouts coming in the Octagon, he is both mysterious and a fighter we can be expected to crave more from in the cage.  It’s just part of the progression for the Hawaiian, who grew up free to explore, just as he is now among the other professionals in his weight class.

“I was born in Oahu, Hawaii, and for me it was a typical childhood, but I was a little rough around the edges,” said Browne. “We had very little supervision growing up, so we were able to do pretty much what we wanted to do as kids.  Growing up in a Hawaiian household that’s a toddler’s dream.  It’s like you’re being raised in a village with all your aunts and uncles, and your cousins are always around, so there’s always that family feeling you get.”

Browne was always athletic, but was not in MMA in the beginning.  At first, hoop dreams and hardwood glory captured his attention, and it took a while to dissuade his interest.  However, once he found the martial arts, he became entranced and changed plans.

“I didn’t start doing any kind of martial arts until I was 23 or 24 and that was when I started playing jiu-jitsu,” said Browne.  “Before that I played basketball and I was always an athlete coming up but I wasn’t into any one-on-one sports, it was always team sports.  When I made the switch to jiu-jitsu it was quite different because all you do is depend on yourself as opposed to an entire team.  It was different but also exciting because I didn’t have anyone to put the excuses on but myself.  After about a year of doing jiu-jitsu that’s when I really got into martial arts.  I started doing kickboxing, standup and all that kind of stuff, and then I started putting it all together, so that’s when I started fighting in MMA.  I played the 2, 3 and 4 position so the guard, shooting forward and power forward, and I played one year in college. Then I just stopped going to school, which I regret doing, but it’s led me to where I am now.”

“A lot of it had to do with just wanting to provide for my kids and that’s where a big part of my drive comes from.  Also, to stay competitive and keep pushing myself on a daily basis and just keep moving forward.”

After a first round TKO of James McSweeney last year at the TUF11 finale, Browne came in like a tornado.  His next bout, however, yielded different results, with a draw against Cheick Kongo at UFC 120: Bisping vs. Akiyama.  It was a fight that is deemed the ultimate learning experience for Browne.

“I learned that I have a lot to improve in terms of being a mixed martial artist and it was definitely a learning experience. In that fight I learned a lot of what not to do, what to do and how to train for my next upcoming fight.”

Looking ahead, Browne’s next challenge lies in Dutch UFC stalwart Stefan Struve, who is always a bona fide aggressor.  Currently on a two fight winning streak, Struve has a balanced UFC record of two submissions, two knockouts and one majority decision victory.  And with only two losses in his UFC stint and being in the organization since 2009, Struve is a problem for anyone within the heavyweight ranks.  Browne, although an admirer of Struve, sees the matchup as a challenge between youth and age, and with Browne older by five years, he is confident his age and particular experience will overpower the youthful fighter.

“Everybody knows that he’s a tough kid, he has a lot of heart and he just does not stop,” said the 28 year old Browne. “It’s something that as soon as they told me who I was fighting I got excited because I knew that it would be a great fight and a war.  It’s something that the fans will get a kick out of.  I think his age is a weakness and just experience in general.  He actually has a lot more MMA experience than I do, but I think that being at a certain age in your life it helps to understand certain aspects of MMA and all that stuff.  But I think one of his biggest weaknesses is his not understanding how to use his reach, plus his standup game, and he doesn’t have a lot of power.”

Living in San Diego now, Browne works with a collage of top talent in the MMA game to keep working towards the top of the heavyweight ranks.  Working out at the Alliance Training Center, he has a litany of big guys to tussle with and he gets energy from a little guy who just happens to be a champion.

“I’m at the Alliance Training Center and we have Brandon Vera, Phil Davis and even though he is nowhere even close to my weight class we have Dominick Cruz, who is always there to help coach and push us; we have Joey Beltran on board too.  That’s our training group and we have some other guys that the fans don’t know that are up and comers but they’ll know about them soon.”

As Travis Browne marches towards his next big challenge, he can only hope to continue to build his brand of fighting among the fans.  Feeling like a grown man among younger athletes, he is ready to show what he’s got to the world.

“Look for me to always be improving, to always push the pace, and to always give the fans something that is worth watching.”