Travis Browne: One Step Away

"Once I stopped wondering what everyone else was thinking, that’s when I really started fighting to my potential." - Travis Browne 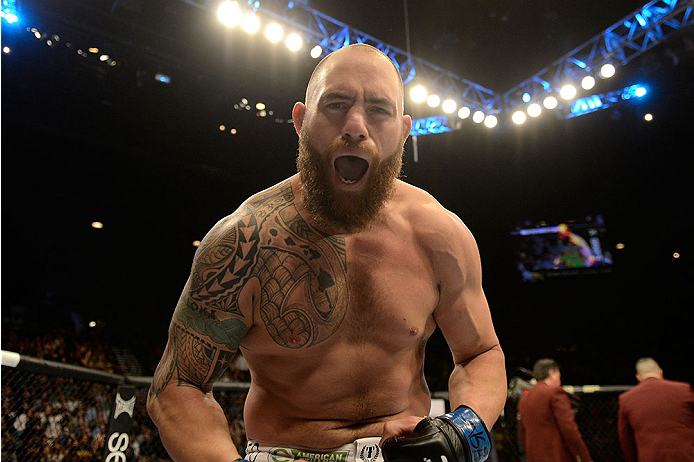 In a division where fighters are measured by assets such as skill and brute power, having mystique can go a long ways.

It has been several years since prospects such as Cain Velasquez and Junior Dos Santos rose to break through into title contention in the heavyweight ranks. While there have been flashes of excitement over that stretch, things have often grown tiresome as the established names and major players have kept the division’s upper tier on a revolving cycle.

The rangy Hawaiian powerhouse is currently in the midst of the most impressive run of his career, as he turned 2013 into his own personal highlight reel. “Hapa” brutally dispatched three mainstays in his weight class, scoring knockout victories over Gabriel Gonzaga, Alistair Overeem and Josh Barnett respectively. Where defeating names that caliber are noteworthy accomplishments in their own right, the manner in which Browne completed those tasks took things to the next level.

The 31-year-old dropped a storm of elbows to drub out “Napao” and “The Warmaster,” and walked through the proverbial fire to finish “The Reem” in what turned out to be an action-packed one round affair in Boston. The former Strikeforce heavyweight champion had the Jackson/Winkeljohn-trained fighter in serious trouble after Overeem planted several of his signature knee strikes to Browne’s midsection. With his body shutting down, Browne battled to defend himself against the barrage, but continued to get rocked as the heavy hands of the Dutchman continued to slip through.

That said, the muscle-heavy Overeem’s gas tank hit empty mid-flurry and the window for Browne to turn things around presented itself. Once the surging contender’s back came off the cage, the tide of the fight moved with him, and he sliced a front kick through his opponent’s hands that blasted Overeem’s chin and sent him crashing to the mat.

“I’ve always had confidence in myself, but I didn’t have the type of confidence I needed until I fought and beat Alistair Overeem,” Browne said. “Now I have total confidence in myself. I know I can take a beating and recover from it if that happens. I’m not really worried about a punch, kick or knee anymore. I just need to go out there and focus on what I need to do to get the job done. That fight made a big difference in my personal confidence level. You go through an ass whipping like that and come out the other side. And not only that, but you come out on the other side and knock him out. It really shows you what you are made of.”

Where he would go on to defeat Barnett several months later at UFC 168 to pick up his third consecutive win, it was the victory over the former K-1 champion that put his confidence through the roof. Not only had he toppled one of the most feared strikers in MMA, but validated himself as a legitimate title contender in the process. All those things registered at the highest importance because it was territory he was supposed to be standing in for some time, had he not been plagued by a setback at a crucial time during his rise through the ranks.

While he made his official UFC in 2010, it didn’t take long for Browne to make a name for himself. The knockout artist went 4-0-1 over his first five outings and was labeled as the “next big thing” in the heavyweight picture. But an injury to his hamstring and a subsequent knockout at the hands of Antonio “Bigfoot” Silva in the first round of their tilt in October of 2012 put the ice on his run to the top of the division.

Yet, despite suffering the first loss of his professional career against the American Top Team fighter, Browne was determined to bounce back stronger than ever. Where his striking has always been considered his greatest strength, the killer instinct burning behind his eyes throughout this current run is evidence that some kind of evolution is happening inside Browne.

His entire focus has shifted and he’s only worried about the damage he can do inside the Octagon.

“When you are chasing respect you almost look for the knockout too much,” Browne said. “You try to force things and it can really take you out of your game and what you do best. When you are going out there and not worrying about respect, you go out there, fight your fight, and do what you do. Things come nice and easy and the opportunity to land that knockout shot just comes. Once I stopped wondering what everyone else was thinking, that’s when I really started fighting to my potential. I’m not worrying about the pressures anyone might put on me or anything like that. For me, I’m just going out there and doing what I need to do. I’m focusing on my own goals and motivations. I’m focusing on what I need to accomplish on this ride through the UFC.

He will once again look to show and prove when he steps in to face Fabricio Werdum this Saturday night at UFC on FOX 11. The two top-ranked heavyweights will be the main event when the Octagon rolls through Orlando this weekend, with the winner of the contest earning the next shot at the title currently held by Cain Velasquez.

Where Werdum has been hovering around a title opportunity since late 2012, this is fresh territory for Browne, and he has every intention of making the absolute most of it.

“You never should be resting there in the first place. I saw an opportunity and I took it in those fights. I think the difference is that I just have the power to back it up. You see other guys land those same elbows, but they don’t have the same effect mine seem to have. You just have to have a solid combination of power and timing to make that happen.

“Werdum is very dangerous and he was supposed to fight for the title for a reason. He’s constantly improving and pushing himself. He’s a dangerous guy and I have to go in there and get the win. I have to take things one fight at a time but beating Werdum will make a big statement. He’s been one of the top guys in this division for a while and I’m going in there with a lot of confidence and looking to get the victory.”