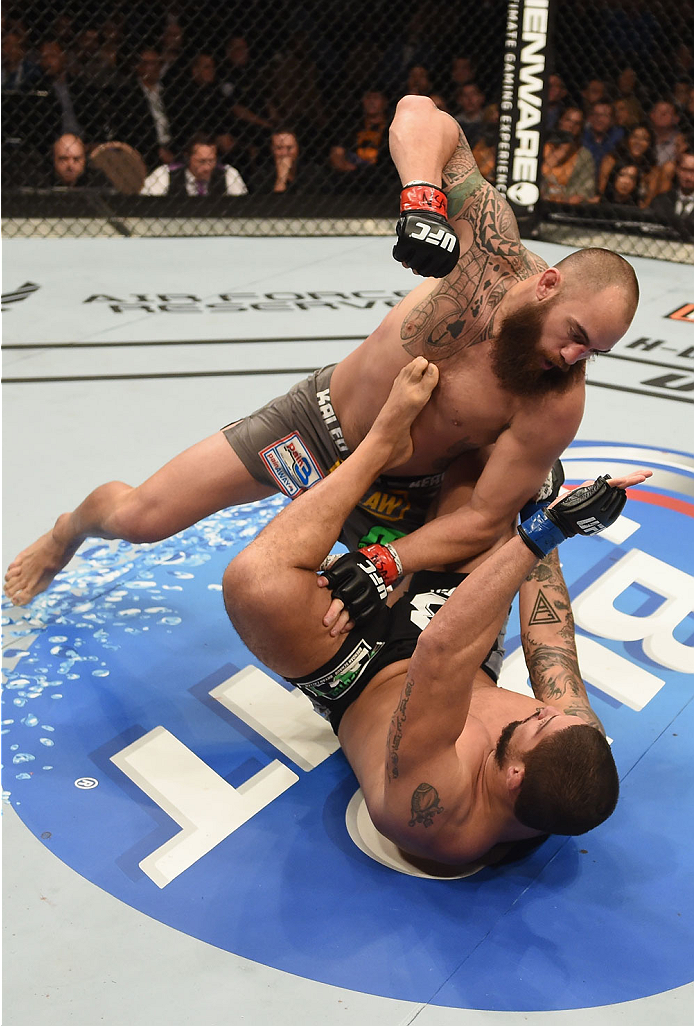 UFC heavyweight contender Travis Browne has no illusions about what will happen when he and his good friend Andrei Arlovski meet in the Octagon on Saturday night in Las Vegas.

In other words, it won’t be a tentative dance, a stick and move sparring session for fans at the MGM Grand Garden Arena. It will be Browne seeking a finish and Arlovski doing the same. It may be a strange concept for some to wrap their head around, but the first thing that comes to mind for me is the 1991 boxing match between welterweight contenders Simon Brown and Maurice Blocker. Close friends for years, Brown and Blocker fought like the bitterest of rivals until Brown stopped his buddy in the tenth round. Sometimes, when two fighters are friends, there is no higher level of competitiveness, and this is the case with Browne and Arlovski.

“I’ve always said that I have no problem fighting my friends, and in this case with Andrei, we’re pretty close,” Browne explains. “We’ve known each other for a little over three years, I’ve cornered him in two or three of his fights, so I was right with him, fighting the fight with him at times. So something like this happens, and it is a business and what we constantly work for. I have a goal, and no matter what happens, I’m going to reach that goal. But there are certain sacrifices made in order to reach that, and one of them is going to be fighting my friend on May 23rd. Some people get worried or they’ll say stuff like ‘because they know each other it’s going to be a boring fight,’ but let me tell you something; I don’t want to lose in general, and I definitely don’t want to lose to Andrei because we’re like brothers. And brothers are the most competitive toward each other.”

And the brother from Hawaii, the 32-year-old Browne, is more competitive than most. Ranked third in the world, with his last four wins by knockout, “Hapa” is on the verge of a world title shot should he defeat Arlovski impressively this weekend. Of course, Browne defines “impressively” a lot different than the rest of us, because it would be hard to ignore the lack of enthusiasm he displayed after a first-round TKO win in his last bout against Brendan Schaub last December.

“I expected more out of myself,” he said of the Schaub bout. “That’s not taking anything away from any of my opponents that I fight, but I didn’t want the referee to have to step in and finish that fight. I wanted to finish it myself and have him either be knocked out or choked out. I wanted to have a definitive finish to that fight, and I didn’t get it. That’s why I was more upset with my performance than anything. I dominated the fight, and I took it to where I needed to take it to get the win, but at the same time, that wasn’t good enough for me. I don’t do this just to squeak out wins and have referees step in.”

A dominant first-round finish in the UFC isn’t exactly what one would call squeaking out a win, but Browne is cut from a different cloth than most of his peers, and what would make 99% of those peers happy doesn’t satisfy the big man from Honolulu.

“I don’t want to just barely win,” Browne said. “Who wants to do that? Why? Because I’m just barely better than you? Heck no. Especially in fighting. There’s a sense of pride there. You want to go out there and, in a sense, take a man’s soul. I beat you. I knocked you out. You’ve been training for me for however long your camp has been, and I took that from you. And people are going to say, ‘oh, Travis is cocky.’ But I mean that in the most respectful way. If somebody doesn’t train their ass off to come and beat me, then you’re disrespecting me and I have no respect for you. If you don’t train your ass off, if you don’t put up the best fight, I don’t have respect for you. You shouldn’t have taken the fight. That’s disrespectful.

These days, that life of dedication to a singular goal is spent in Southern California, where he works with Edmond Tarverdyan and the Glendale Fighting Club. This is his second camp there after a long run with Jackson’s MMA (Arlovski’s team), and the second time around, Browne is beginning to settle in.

“It definitely feels a little more comfortable being here,” he said. “Just knowing the routine of what’s going on in the camp and being a little more familiar with what my coaches want, and bringing guys in and where I’m staying and all that stuff, you start to settle in a bit. And that’s real important. The less decisions you have to make during the day, the more you get to focus on training.”

Training does get broken up by media obligations though, and while the questions often stray from the nuts and bolts of the task at hand and into areas like a possible title shot and his friendship with Arlovski, Browne takes it all in stride, knowing that it’s part of the job, so he doesn’t get distracted.

“I chose to be in this situation, and there are certain responsibilities that come with it,” he said. “That’s what going to happen. Somebody in my position, you have to be ready to talk about things like that, and that’s what people are going to want to talk about. You just have to be able to separate them.”

And he has. So even though the attention is largely on Browne’s future and his past, his mind is strictly on the present.

“I’m a here and now kind of guy,” he said. “I’ve got a big man standing in front of me come May 23rd and that’s who I’m focused on. Whatever else plays out in the year is based off my performance on May 23rd, so that’s really what I’m focused on.”