“I have dedicated myself athletically; I'm smaller, I'm in better shape, and my conditioning is so much better.” - Eric Schafer 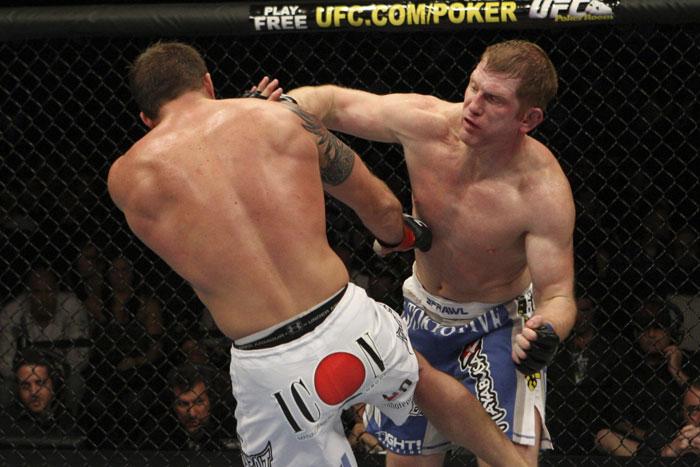 The fight game is about continuous evolution. In and out of the cage, if a fighter cannot keep up with the steadily increasing pressure, then they will get left behind. It is as simple as that. Striking has to be crisper, submissions have to get slicker, takedowns need to be faster, gameplans must be smarter, and, above it all, a fighter’s mental edge has to be honed razor sharp like a samurai’s sword. No one understands MMA’s process of natural selection better than Biology major, with a minor in Chemistry, and returning UFC veteran Eric “Red” Schafer.

It has been over a year and a half since “Red” has graced the Octagon with his presence, and in that time much has changed for the Wisconsin native. Schafer has revolutionized himself as a fighter in this absence and will get the chance to debut this “Red 2.0” at UFC 136 against wrestling powerhouse Aaron Simpson. The highlights of Schafer’s metamorphosis can be found within these four numbers: 20, 78, 811 and 8.

The first number, 20, is the amount of pounds “Red” has dropped from previously competing as a light heavyweight, as Schafer is now making his UFC middleweight debut.

“When I was originally fighting, pre-UFC, I was walking around at 210 and would drop down to 205,” says Schafer. “For a normal guy, that's normal. When I started to meet the UFC guys they were 230 cutting to 205, so I decided if I was going to fight at 205 I had to bulk up to get to 230. I think it slowed me down. I was definitely stronger, but I was less flexible and had less speed. After awhile, I thought maybe I should go back to my normal weight. It wasn't about going down to an easier class or trying to feel stronger - I just wanted to be more athletic. I cleaned up my diet and went down to 185. In between fights, I have done a lot of grappling tournaments and I felt so much better. I felt more flexible, my cardio was better, I felt faster and my strength was pretty similar. I feel much better at this size than when I was 220 cutting to 205.”

The svelter Schafer will enter the Octagon faster, more flexible, with a bigger gas tank, and ready to add another win to his 14-5-2 pro record. But before he can try to derail the 9-2 “A-Train”, Schafer’s first fight is with the scale at the weigh-in. This is his debut as a UFC middleweight, but he already had a trial run the first week of September in the form of a bout at a local show. Schafer made the weight and, the following night, made short work of his opponent with a triangle choke less than two minutes into round one. Talk about immediate results.

“My opponent was a wrestler,” tells Schafer. “I knew he takes guys down and I knew what takedowns he uses. He seemed pretty solid on the ground, but that's my specialty. What I was really working on for that fight was my striking, which I'm always trying to improve. I think I did well with my striking in this fight, I made him shoot in. Once he did try to take me down, I went for a guillotine and that didn't work. Also, I wanted to prove that I'm dangerous off my back because I did lose to two wrestlers in my last two fights. I had them in trouble once in awhile in those fights, but I wanted the finish. After we hit the mat, I had been working a lot off my back and shooting up submissions. The guillotine failed and seconds later I locked up that triangle and that was it. Even though the fight was short, my striking looked good and my jiu-jitsu off my back looked good, so the two things I was working on paid off.”

The recent victory on September 3rd is far from the only action he has seen in the past year plus. Schafer was a regular fixture in Minnesota at Team Death Clutch, where he helped UFC heavyweights Pat Barry and Brock Lesnar prepare for their fights. On top of rolling with the biggies, Schafer has gotten back to his roots and competed in over 30 no-gi grappling matches at this new weight, and the Brazilian jiu-jitsu black belt won all of them. Even more impressive, these matches/tournaments were submission only. “Red” has been in some brutal grapplethons, which is where the second number, 78, comes into play: it’s the amount of minutes one of his no-gi submission only matches lasted.

“In the last year, since my last fight, I had four submission only grappling matches go over 20-30 minutes,” states Schafer. “The longest one went for an hour and 18 minutes against a black belt. It was the second round of the tournament. A lot of it was in his closed guard, he was very conservative. I was defending submissions and rolling around and finally I took his back and submitted him with a rear naked choke. I still had two more matches to go after that. I was cramping up, but I never quit and I won the whole tournament. Partly because of this new diet and this new body mass meant that I could keep going. It has definitely improved my cardio and my mental focus. It was a really long grueling mental battle. In a way, it gives me so much confidence going into these matches that I can't be broken anymore. That's something that maybe five years ago could have happen. I feel much better at this weight class.”

Not that MMA and no-gi are the same, but, at the very worst, the longest Schafer’s bout with Simpson can be is 15 minutes. For “Red”, having that experience of actively competing for over an hour and still having the wherewithal to finish that opponent and two opponents after that is a major confidence boost no matter how one slices it.

The third number, 811, is the street address where Schafer has been busy training and sculpting this new version of himself: Red Schafer Mixed Martial Arts. In Milwaukee, Wisconsin at 811 East Vienna Avenue, he opened his own school for business last December and his upstart no-gi grappling team has been taking the local competitions by storm. Schafer’s return to the Octagon will not only be for himself, but for his school too, as he is backed by a legion who have invested in him, and with that, Schafer’s drive to win at UFC 136 is that much greater.

“You always have pride; everyone in the UFC who fights has personal pride, but when your name is on your shorts now - it’s much more different,” explains Schafer. “You have so much support. All your team, all your family, even the new guys, the white belts in jiu-jitsu, they want you to win, they've helped you out, and they're buying your t-shirts at the gym. It's so cool to have that support. When I fought three weeks ago, it was a completely new feeling because I had my personal pride, but, now, I wanted to win for all the guys at the gym. It's so much harder to quit, even in practice. They're there to help me out, so I want to show them what I can do. That core, that backing, is so much more for this UFC fight. I'm so pumped up to win for the school.”

As one would expect, the school is zoned-in on one thing: helping “Red” win. For really the first time in his career, Schafer is getting the one-on-one attention that all fighters deserve. Schafer has had some great training over the years at Roufusport and, recently, at DeathClutch, but nothing compares to being the sole focus of everyone around you. It’s a new experience for Schafer and it’s one that he’s enjoying.

“We have a really good young team,” affirms Schafer. “We're in Wisconsin, which is a really good wrestling state, so we've got really good wrestlers and boxing coaches helping me out. Now, it's my school, so the team is almost single-mindedly helping me out in this camp. Everyone comes into school trying to fight like Aaron Simpson for me. My boxing coach is watching his fights just for me. I'm not part of a big team where the focus becomes divided. It's me and a few other pro fighters and when it's their fight I try to become who they are going to fight. We have a good family going on here who helps each other with their fights. We have pretty much dedicated the whole school in a way to how to beat Aaron Simpson.”

The final number, 8, is for October 8th when Schafer gets to put all this theory into practice when he tangles with Simpson in the Octagon. At UFC 136, the 34 year old will start his third stint in the UFC, but this time it will be at a new weight class as an overall more confident fighter in all aspects. As for the contest itself, Schafer’s more than ready to take on another power punching wrestler and this time walk out with the W.

“I just fought three wrestlers in a row and I've gotten progressively better against them,” remarks Schafer. “He's just like the others: he's a good wrestler with boxing. He's not going to try and submit me. He's going to take me down and try to punch me and on the feet he's going to swing away with those punches. In a way, I've been doing this same gameplan for four fights now and, hopefully, I've got it mastered. I'm just working on his specific takedowns and the specific boxing he does. I think I did good against Bader, I think I did really good against Brilz before the altitude got to me and the last fight I won, so I'm getting better and I think this will show in this fight.”

This Saturday, Schafer will not be debuting at middleweight, but he’ll be debuting the new “Red”. “I have dedicated myself athletically; I'm smaller, I'm in better shape, and my conditioning is so much better,” says Schafer, who knows the best way to show the UFC fans he’s improved is with a win over Simpson. “I think I can submit him, but I'm ready to win by decision if need be. Hopefully, it shows what this new school has done to me. I just want them to see the transformation in me in this fight.”