Tracy Cortez Does Everything For Family

When Tracy Cortez earned a contract on season three of Dana White’s Contender Series, it was a moment that she will remember for the rest of her life, not only because she made it to the UFC, but because of how overcome with emotion she was.

“I couldn’t stop crying,” Cortez said with a laugh. “I was really emotional. I think I was just finally taking it all in.”

Cortez’s victory over Mariya Agapova wasn’t just her victory. It was also the victory of her brother Jose, who dreamed of reaching the UFC before passing away in 2011. His dream became Cortez’s to realize and she did just that on July 30.

Cortez trains out of Fight Ready MMA and with Neuro Force One in Phoenix, AZ with close friend Henry Cejudo. The two became acquainted through Jose, who was high school wrestling teammates and best friends with Henry’s brother Angel. Her training with the double champ and his team is a big reason that Cortez is 6-1 as a professional.

Now it’s time for Cortez to continue building on that dream in her UFC debut this weekend against Vanessa Melo.

“I’m really excited to make my debut. It’s a lot sooner than I anticipated, but I love challenges and I love that I can jump back into the Octagon right away,” Cortez said. “The fact that I’m fighting on her home turf in Brazil, a big huge country, I’m excited to feel the crowd’s energy. I know I’ll feel it.”

Debuting in Sao Paulo against a Brazilian is a tough task, but it’s a task that Cortez is thrilled to take on.

Melo recently made her debut at UFC Mexico City against bantamweight contender Irene Aldana. Despite dropping the contest against Aldana, Melo showed that she is more than happy to scrap with the best.

Cortez believes that this fight is a great opportunity to prove to the UFC, other fighters and fight fans that she deserves to be in this position. It’s the perfect test for Cortez and she plans on passing with flying colors.

“I feel like everything is still at stake because this is just the beginning,” Cortez said. “So, I really have to showcase my skills to show that I belong here.”

Cortez doesn’t think that she will be as emotional as she was that night on Dana White’s Contender Series, but that doesn’t mean that her family won’t be on her mind. 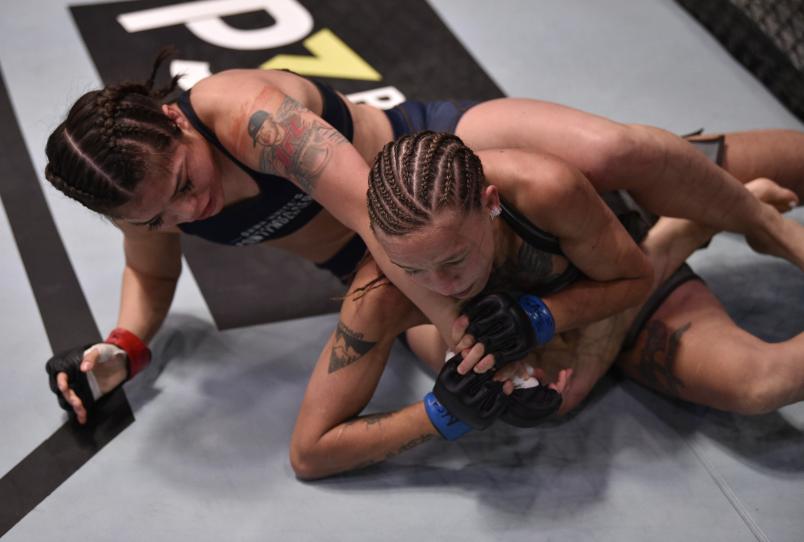 In fact, it’s all that will be on Cortez’s mind.

“They’re always on my mind. My family is priority for me,” Cortez said. “I wish they could be here, but my family is the only thing that is on my mind when I’m walking to that cage.”

Cortez will certainly make her family proud with her performance, no matter the outcome on Saturday, but she has aspirations to put people on notice sooner rather than later.

“I just want people to know who I am,” Cortez said with a smile. “People are going to know who Tracy Cortez is.”

Make sure you watch Cortez’s UFC debut on ESPN+ at 5pm/2pm ETPT. And if you don’t have ESPN+ get it right here.