Townsend Lives Up To Ultimate Promise

“We were in the hospital and I felt his heart beat until it stopped and I promised him that I was gonna make it to the UFC; that I wasn’t gonna stop fighting until I got there.”
By Thomas Gerbasi, on Twitter: @TGerbasi • Jan. 24, 2020

On March 15, it will be five years since Dequan Townsend lost his four-year-old son Malakye to cancer. And while it’s gotten easier for the UFC middleweight to get through daily life without him, it’s never easy.

You can hear it in his voice when asked about the worst period of his life.

“Truthfully, it was very, very hard,” said Townsend. “Previous to me losing my son, I lost my mom about six months prior. And that really f**ked me up. I’m a father of five and even though I love all my boys, Malakye was my baby. I didn’t know what I was gonna do. I really didn’t. I feel like a piece of me was ripped out of my body and I could never get it back. I was drinking every day, I had so much anger and nowhere to channel it. I just wanted to fight.”

At the time, Lansing’s Townsend was 9-3 as a pro. He was showing glimpses of UFC-level talent, but wasn’t nearly consistent enough to get that call to the big show. That didn’t stop Malakye from looking at his dad like he was Superman.

“He would fall asleep watching me fight on the phone or YouTube,” recalled Townsend, who made a promise to his son as the two spent their final moments together.

“We were in the hospital and I felt his heart beat until it stopped and I promised him that I was gonna make it to the UFC; that I wasn’t gonna stop fighting until I got there,” he said. “That was my number one goal.”

Three months after the passing of Malakye, Townsend returned to fighting, kicking off a five-fight winning streak that had him getting closer looks, but that run of success was followed by a 1-4 stretch. Again, “The Tarantula” heated up, going 6-1 in his next seven. Frustration began to set in, and in June of last year, he let it out.

“I ranted on my Facebook page,” said Townsend, who had also tried out for The Ultimate Fighter. “I felt I should have got a call a long time ago. I’d seen some people that were getting calls or getting opportunities on the Contender Series that I felt like I should have had. I was in the top five in the country on the regional scene for years. What more did I need to do? I’m not getting younger, I’m only getting older. So when’s my opportunity gonna come? Is it gonna pass me by? Am I getting to be too old?”

A week later, the phone rang. It was an offer to fight Dalcha Lungiambula in the UFC at light heavyweight. In three days. Townsend, who wasn’t planning on fighting until August, had 20 pounds to cut to fight up a division. But he wasn’t about to turn his opportunity down. 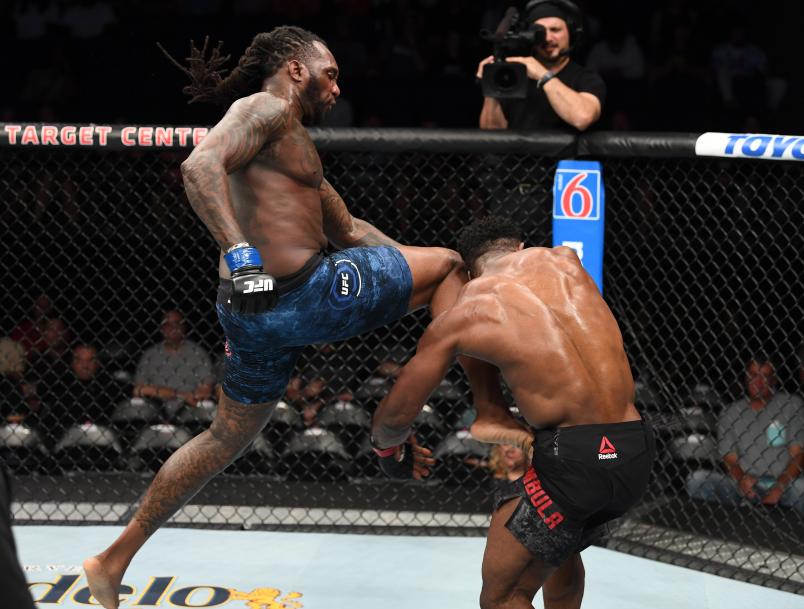 MINNEAPOLIS, MN - JUNE 29: (L-R) Dequan Townsend lands a flying knee against Dalcha Lungiambula of the Democratic Republic of Congo in their light heavyweight bout during the UFC Fight Night event at the Target Center on June 29, 2019 in Minneapolis, Minnesota. (Photo by Josh Hedges/Zuffa LLC/Zuffa LLC via Getty Images)

MINNEAPOLIS, MN - JUNE 29: (L-R) Dequan Townsend lands a flying knee against Dalcha Lungiambula of the Democratic Republic of Congo in their light heavyweight bout during the UFC Fight Night event at the Target Center on June 29, 2019 in Minneapolis, Minn

MORE FROM UFC RALEIGH: JDS Focused On The Belt | No Going Back For Chiesa | RDA Taking The Hard Route | Fight by Fight Preview | Fighters On The Rise | Hill Reaching Her Peak

There would be no Hollywood ending against Lungiambula, though, as Townsend was stopped in the third round.

“Truthfully, I would say it teaches me,” he said. “The longer I have to prepare for anything, the better. And in all honesty, if I had three months to prepare for that fight, Dalcha’s a big dude but he wouldn’t have won the fight. I have too much experience. Not to take nothing away from him, he got the W and it is what it is. But I know me, I know what I’m capable of and I studied him to know exactly what he does. Obviously my hand didn’t get raised and there was a little controversy when it came to the fight being an early stoppage, but it happens. He’s a very explosive guy and I didn’t have the time to train. I had to maintain energy and maintain cardio on three days’ notice outside of a weight class that I don’t fight in. There’s a lot of things that play a factor, and 205 and ’85 is a big difference, especially when you’re fighting a guy who’s fought at heavyweight and light heavyweight.”

Townsend did have his moments in the bout, so he was likely going to get a second chance to make a first impression. But then he got hit with a six-month USADA suspension after testing positive for benzoylecgonine, a metabolite of cocaine, and norfentanyl, a metabolite of fentanyl and its derivatives. It was an unexpected blow for the 33-year-old, who was worried his UFC career was going to be over before it even got truly started.

“At one point I was definitely scared,” admitted Townsend, who ultimately accepted the suspension and completed a USADA approved drug rehabilitation program, then received a fight contract to face Bevon Lewis this weekend in Raleigh. Then it was time to deal with the backlash.

“I don’t discredit anybody who does what they do on the side, who has their personal involvement with certain things, but there’s plenty of ways that drugs can get into people’s system,” Townsend said. “When it came out, I’ve seen thousands of comments with people saying what they want to say, but I don’t let that bother me, I don’t reply, I just let that fuel me to be the top athlete that I can. I took the classes I needed to take, and I go from there. I do explain to certain people that it’s very common for people to get things in their system from their mucous membrane. My 9 to 5, I’m a nurse, so I deal with situations like this on the regular. But I put the whole thing behind me and I want to fight. I want to show that I’m a top level athlete.”

And a man of his word.

“I look forward to putting on a show and fulfilling my promise that I made to my boys.”